Car smashed by a train after getting stuck on a railway crossing in Davos was EMPTY, police reveal

Car smashed by a train after getting stuck on a railway crossing in Davos was EMPTY, police reveal – as they question driver who abandoned the vehicle on the tracks

By Faith Ridler and Dianne Apen-sadler For Mailonline

A Volkswagen that was crushed by a train after it got trapped on a level crossing in Switzerland was empty, police have revealed.

Footage of the terrifying incident shows a train ploughing into the stationary car after desperately whistling to signal its approach in Davos.

The blue car is then thrown to the side of the tracks as the locomotive stops beside it.

Swiss Police have now confirmed no one was in the vehicle at the time of the crash despite claims by a British news agency that three terrified businessmen were unable to escape the car. 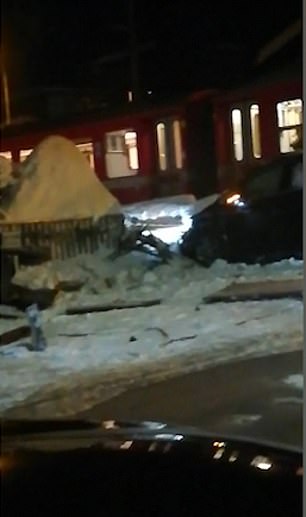 These claims were reported by various British news organisations, including MailOnline.

Authorities have also confirmed they are questioning the motorist who abandoned the vehicle on the tracks in Davos, the Swiss town hosting the World Economic Forum.

A spokeswoman from Graubünden Police said: ‘Reports that people were in the vehicle are not correct. No one was in the car when the train collided with it.

‘There is an investigation into the incident so we cannot give further details. The driver will of course be questioned, as will witnesses.

‘It is an offence to leave a vehicle on a crossing.’ 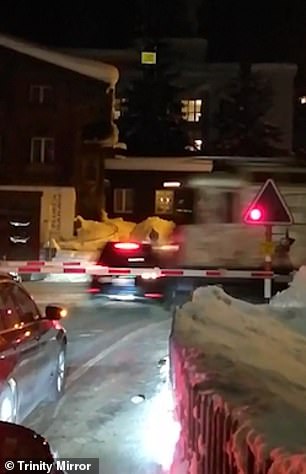 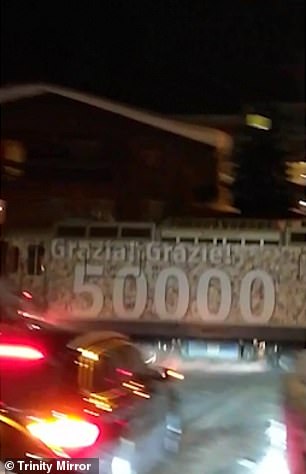 Authorities have also confirmed they are questioning the motorist who abandoned the vehicle on the tracks in Davos, the Swiss town hosting the World Economic Forum

It was previously reported that the car got caught between two barriers due to traffic build up around the tiny Swiss town on January 22.

It was believed two of the men climbed out of the vehicle after the crash, but had to help the third out after he was trapped in the backseat by a child lock.

A police spokesperson at the time confirmed no one was injured. A statement added: ‘If you are in such a situation, leave the car as soon as possible and call emergency the number’.

Those involved were reported to be three British businessmen attending the World Economic Forum.

This year, the world-renowned event was attended by the likes of Angela Merkel and Prince William.