A pair of high school sweethearts are now living as a polyamorous triad after inviting another woman to join their five-year relationship.

Mechanic Robert McCoy, 22, and his girlfriend Victoria Gibson, 23, from Fresno, California, fell in love after they met at a local skate park in 2012 after school, embarking on a long term monogamous relationship.

But when Robert met receptionist, Destiny Griffin, 22, through work in May this year, the three started to spend time together, and have officially been in a closed triad since August.

The trio say they see love as an emotion that shouldn’t be limited, and argue that the best thing about their unusual set-up is that there is twice as much love as there is in a traditional relationship.

And they’re planning to get married and start a family together in the future. 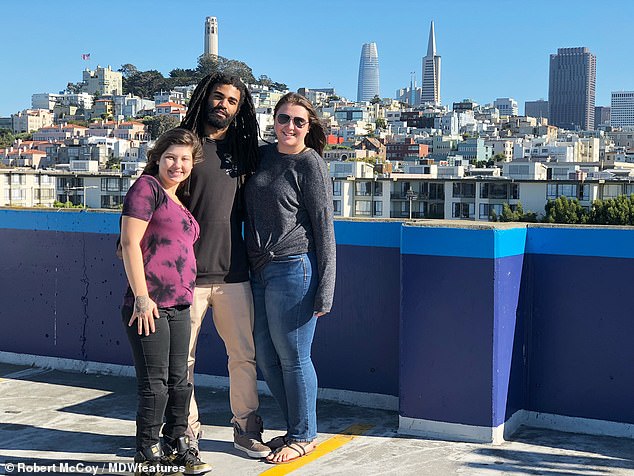 When Robert met receptionist, Destiny Griffin, 22, through work in May this year, the three started to spend time together, and have officially been in a closed triad since August

Speaking about their new relationship, Robert said: ‘Morally speaking, society has embedded monogamy into the depths of individuals and shuns those who say they love more than one person.

‘I believe love and all other emotions have no boundaries or limits, so why not love as much as you can love.’

Recalling how his more traditional relationship with Victoria, who has spina bifida, began, he explained: ‘We have not always been a triad. Me and Victoria were together for a little over five years before we got with Destiny.

‘Me and Victoria met at the skate park while we were in high school. Me and Destiny met through work.’

Admitting that the women in his life had some questions over how their three-way relationship would work, he added: ‘We fell in love as a triad after many, many long nights of talking and getting to know each other.

‘Destiny is very, very open minded, but at the same time had plenty of questions on the true working of potentially being in a triad and perusing a relationship.’

Explaining that he wants to break tradition and help create a new concept of family, Robert said: ‘I also see so much beauty in breaking free of what society says is “okay”, and showing people that life is what you make of it, not what most people say it should be.

‘This is not how I imagined life, yet now that it is here, I can’t imagine anything different. The thought of a closed poly triad family unit is beautiful to me.’

Receptionist Destiny said: ‘Since being in a triad, I’ve been able to open my mind to see that there’s more to life and love than what people really think. The connection goes so much deeper and having two people by my side each day just deepens the connection we have. 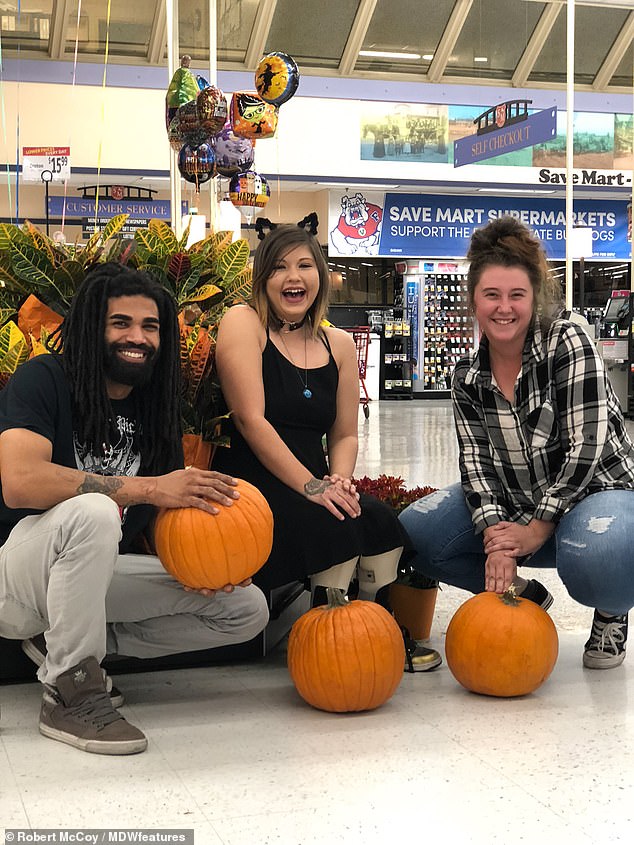 Now the triad are focused on growing stronger together and one day plan to get married and start a family together (Robert, Victoria and Destiny – left to right)

‘Thinking back to a year ago, I would’ve never thought of myself being in a triad because it sounded foreign and it’s looked down upon to want to be with two people at once.

‘Being in a triad can be complicated at times but it never takes away from the good times that we have. I love my two and the life that we have built together so far.’

Robert, Victoria and Destiny’s families are all accepting of their non-conventional relationship. 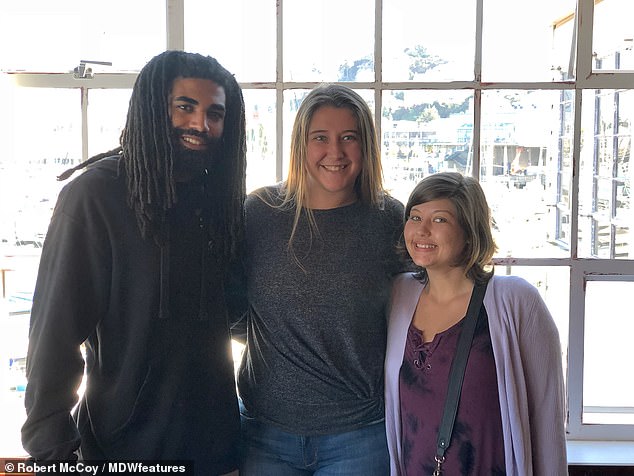 The high school sweethearts who have been joined by his colleague Destiny want to show the world that true love has no limits or boundaries.(Robert, Destiny and Victoria – left to right) 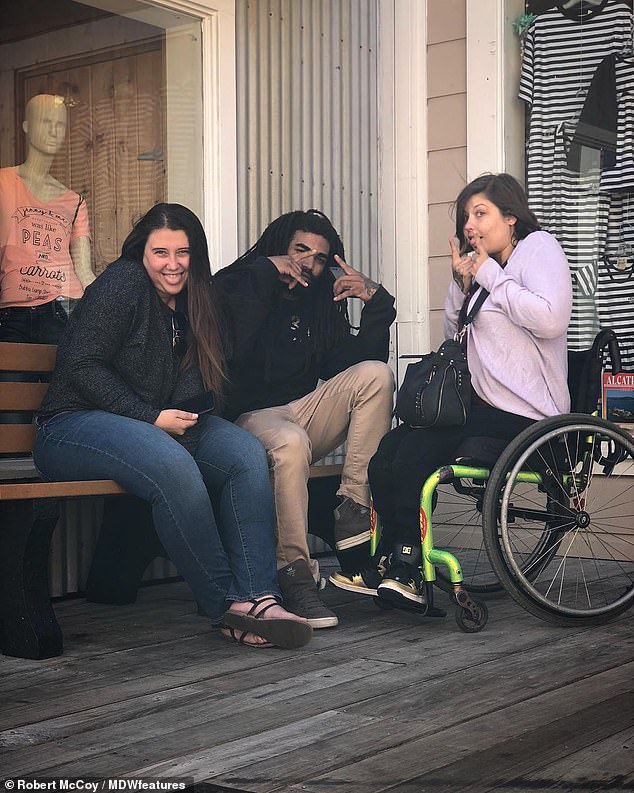 When Robert met receptionist, Destiny Griffin (left) through work in May this year the three started to hang around together and bonded over their similar interests and have officially been in a closed triad since August

Victoria explained how her family took the news and spoke about how the triad navigate any natural feelings of jealousy that may arise.

‘My family is okay with pretty much everything I do as long as I’m happy and okay,’ she said.

‘I do get jealous, but I realise that it’s small natural jealousy and I never let it become an issue. I’m really working on being able to discuss my feelings of jealousy when they come up so we can work through them together.

‘In the future I plan on having a beautiful family with my partners and having a house big enough to fit us all comfortably.’ 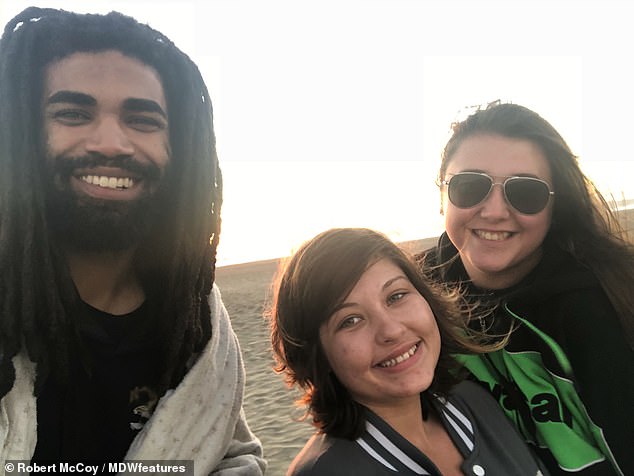 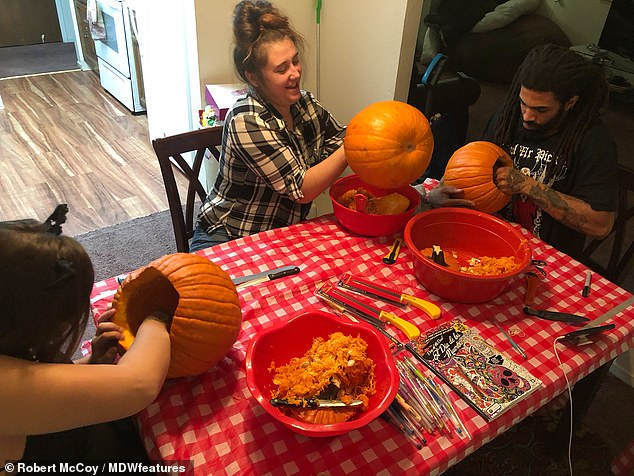 The trio love spending time together, and are seen here pumpkin carving. They plan to have a family together in the future

Robert added: ‘I don’t get jealous. To me it was a beautiful thing watching the person I love fall in love.’

‘And at this point it’s even more beautiful watching the two girls I love work together and provide for each other in ways I never could. Something about the way a woman cares and nurtures can never be recreated, especially by me.’

Destiny addressed her own feelings of jealousy within their unit, adding: ‘Jealousy is a natural feeling that a human will always feel sometime in their life. In a triad, it’s very important to recognise, acknowledge, and talk about where each other are when it comes to jealousy. 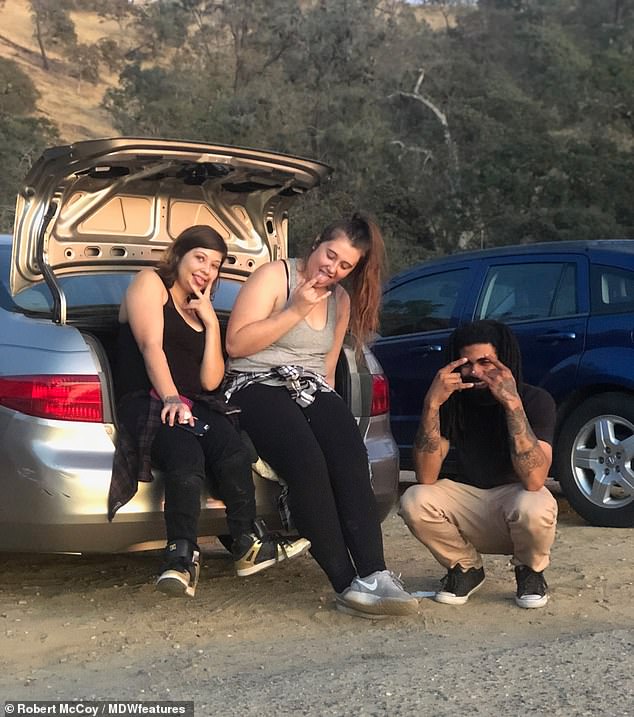 Destiny (seen centre) addressed her own feelings of jealousy within their unit, adding: ‘Jealousy is a natural feeling that a human will always feel sometime in their life

‘It will happen and it’s important to let that person know that they are still loved and is not left out. There have been times when I got jealous. I would crave someone’s attention while they are giving or receiving attention from or to the other, but at the end of the day, they’ve never failed to attack me with love and just show that I’m still important.

‘In our relationship, there’s not much jealously, except little things which can be easily talked about. The key to keeping jealousy at a minimum is to find a balance that fits everyone’s needs.’

Speaking about the reaction he receives when he tells people about their relationship, Robert admitted they usually differ between sexes. 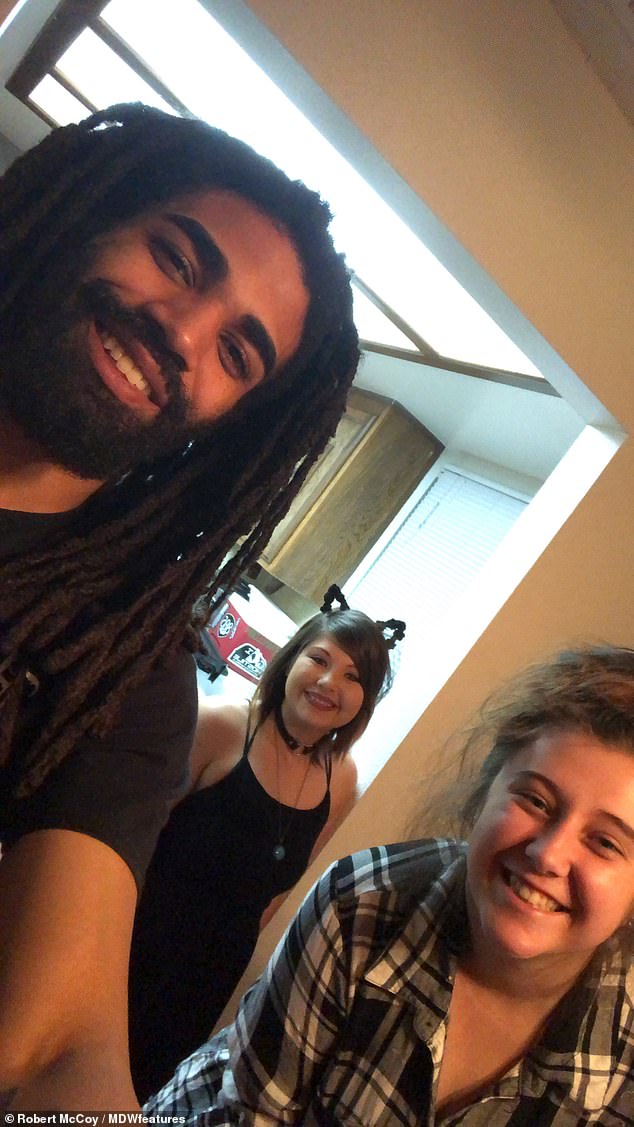 Speaking about the reaction he receives when he tells people about their relationship, Robert admitted they usually differ between genders, with men making it about the sexual aspect

‘My reactions would mainly depend of the gender of the person I tell. Most females are rather curious, ask questions, give their views on it and we can really have a good conversation about the ideology of polyamory,’ he said.

‘Guys on the other hand don’t see very further than the sexual aspect of the relationship. They also don’t initially see the emotion and effort that goes into being in my position but rather see it as a status symbol or ego booster.

‘Most of the time I won’t really talk about it with other guys because my emotions do run very strong for these girls and I like to express how I feel about them, not answer sexual questions or not be taken seriously as far as my relationship goes.

‘The one message I would like to convey would have to be that an individual’s happiness lays strictly in their hands, nobody knows what will make you happier than you know yourself.’ 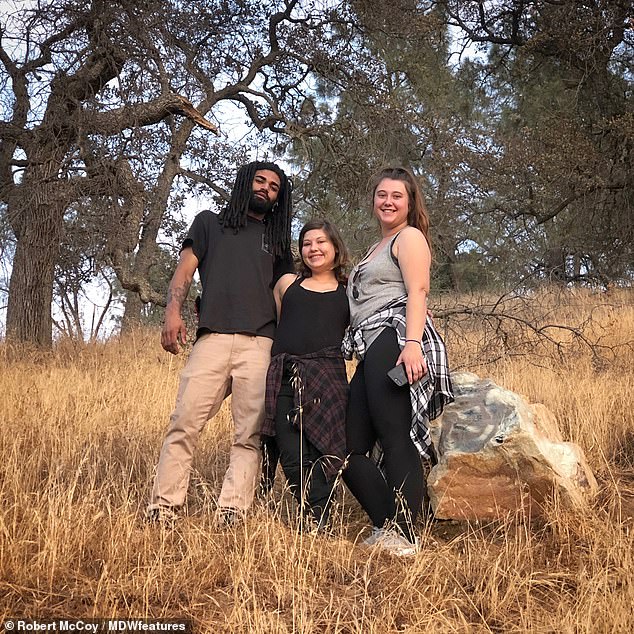 Robert, Victoria and Destiny’s families are all accepting of their non-conventional relationship.