Car thief, 18, who wrecked stolen Fiesta avoids jail after judge says he should be ‘given a chance’

A teenage tearaway who was named and shamed as a prolific car thief on a Facebook community crime fighting page has been spared jail by a judge who said he should be ‘given a chance.’

from Bolton had his picture posted on social media and was branded a ‘rat’ and an ‘absolute tramp’ by long suffering neighbours after running with a car crime gang named The Dingers.

At Manchester Crown Court, the 18-year-old was sentenced to eight months in a young offenders’ institution, suspended for two years, after admitting two counts of aggravated vehicle taking, possessing a baseball bat and having no insurance.

Judge Timothy Stead said immediate custody would be ‘counter productive’ for the teenager as he would only serve a few weeks behind bars under legal guidelines and get little ‘help or support’.

Instead he ordered him to complete an ‘intensive community order’ requiring him to attend 35 days of rehabilitation activity sessions.

At Manchester Crown Court, the 18-year-old (pictured above) was sentenced to eight months in a young offenders’ institution, suspended for two years, after admitting two counts of aggravated vehicle taking, possessing a baseball bat and having no insurance

The judge ruled: ‘Bearing in mind his youth, it might be a chance to give him a chance with something hanging over him of course to show that he can do better. I can’t say that I am overwhelmingly confident that he will do that bearing in mind his problems which are not his fault and also his attitude.

‘On the other hand if says he wants to do better and stay out of custody in these particularly difficult times, I ought to try a different course and give him a chance.’

He told the teenager: ‘I’m told you want another chance and would like to get out. But if you are running with the wrong crowd you are pretty much guaranteed that you will be back inside again. Make the best of it. Nobody wants to see you having a life of violence and crime and ending back in prison…’

Inquiries revealed McNally had 12 previous offences on his record dating back to 2014 when he was just 12 including robbery, attempted robbery, burglary, possession of a blade article and aggravated vehicle taking. He is currently under investigation over allegations of robbery and witness intimidation. 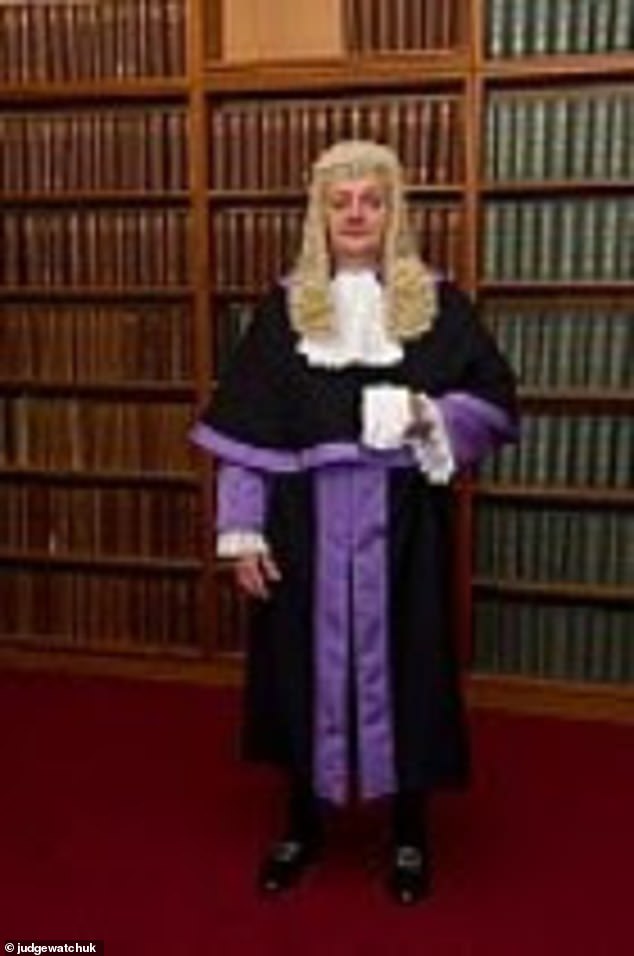 Judge Timothy Stead (pictured) said immediate custody would be ‘counter productive’ for Jensen McNally  as he would only serve a few weeks behind bars under legal guidelines and get little ‘help or support’. Instead he ordered him to complete an ‘intensive community order’ requiring him to attend 35 days of rehabilitation activity sessions 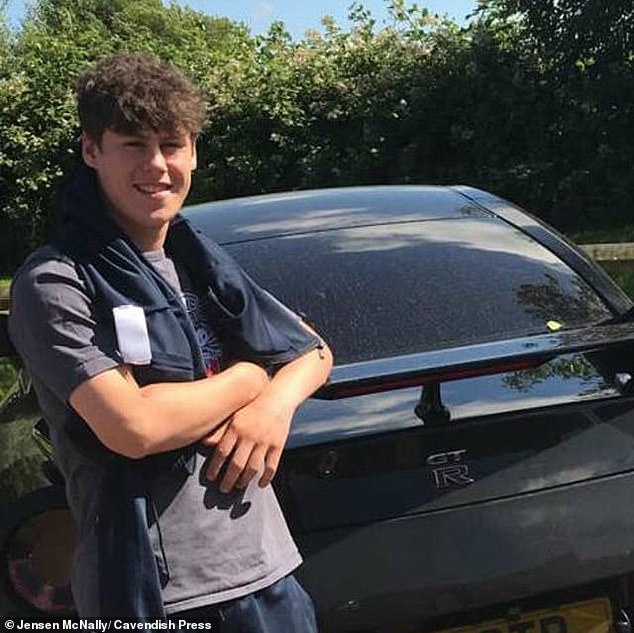 Jensen McNally (pictured) blamed his behaviour on having a feckless father

At Bolton Crown Court, McNally who has been in custody since his arrest admitted two charges of aggravated vehicle taking, possessing an offensive weapon and having no insurance but was given eight months youth custody suspended for two years after he blamed his behaviour on having a feckless father.

He had been arrested in March after he smashed a stolen car into another vehicle then jumped out into the street armed with a baseball bat during a violent gang confrontation in Bolton, Greater Manchester. Police caught him as he stole the other car then reversed it away at speed in a failed bid to evade capture.

The court heard the stolen car incident occurred at 4pm on March 17 after McNally was seen driving a Ford Fiesta stolen from a house in Rossendale. It drove slowly past a parked Vauxhall Corsa and then returned as four men got out of the Corsa to walk to a nearby house. 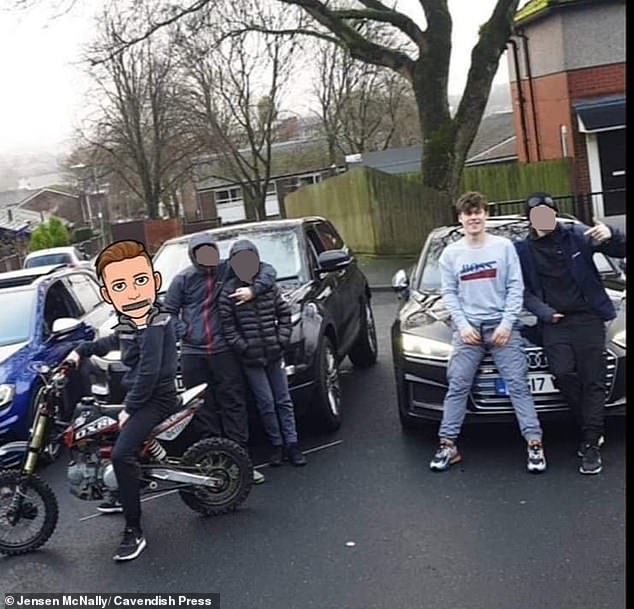 McNally drove the Fiesta at one of the men and ploughed into Corsa and shunted it six feet. One of the men from the Corsa threw a stone, shattering the Fiesta’s rear window and McNally jumped out with the baseball bat whilst a 14-year old friend climbed into the Corsa and drove off.

During the fracas, McNally was struck over the head with a piece of wood and then he ran off. Half an hour later the police spotted the missing Corsa with McNally standing beside it. The teenager jumped into the car and reversed away at high speed, did a handbrake turn and dumped the vehicle. He was arrested at his home the following day. It emerged McNally and the Corsa’s owner had been embroiled in a bitter feud.

In a statement the owner of the Ford Fiesta said his car valued at £6,000 had been written off. He told police: ‘I am scared to buy another car in case I find it missing. My car was my pride and joy and I worked hard to pay for it. I now have to borrow other’s cars to get to work.’ 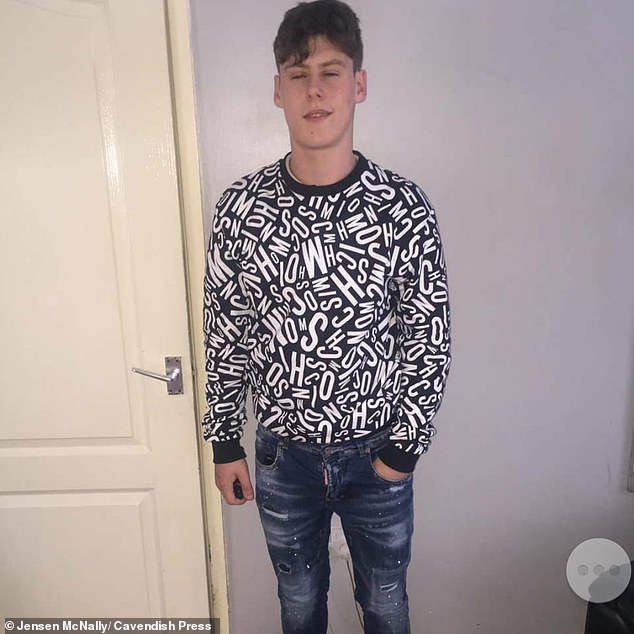 In mitigation defence counsel Andrea Lock said the stolen Fiesta had been fitted with false registration plates and used as a ‘pool car’ by yobs in the Bolton area before McNally paid for exclusive use of it.

Miss Lock added: ‘He has an unenviable record but he does have significant problems. He had extremely negative influences from his father and suffered psychological damage when he briefly entered his life but he does have the support of his mother and an address to go to.

‘He had previously been out of trouble for 14 months. He is not a young man without hope. He is clearly extremely immature and needs intensive intervention at this stage. He is under no illusion that this is a make or break situation for him now.’

McNally who thanked the judge was also banned from driving for 12 months.

Earlier this month he and various other teenagers were named as the culprits behind a crime spree by the ‘Atherton car crime, Thefts & Burglaries’ page.. One local posted: ‘Are the police actually doing anything about this lot. Its madness. They must feel pretty untouchable if not.’