Cara Delevingne claims Harvey Weinstein told her she would never make it as a gay woman in Hollywood, tried to make her kiss another actress in front of him and suggested hiring a man to take her to parties to hide her sexuality

Cara Delevingne has claimed that Harvey Weinstein told her she would not make it as a gay woman in Hollywood and encouraged her to hide it.

The model and actress, 27, says the media mogul told her to hire a ‘beard’ – someone of the opposite sex to take her to parties and events to mask her sexuality.

She claimed that this was one of the first things he had said to her before inappropriately asking her about any famous people she had been intimate with.

‘When I’d just started to audition for films, he was naming people I’m friends with — famous people — and asking, ‘Have you slept with this person?’’ Delevingne told Net-a-Porter.

She also claimed that he made sexual advances towards her and tried to coerce her to kiss another actress in front of him, in an Instagram post from October 2017. 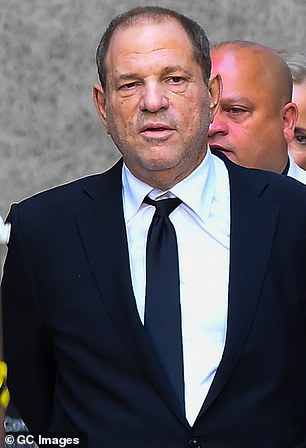 Model and actress Cara Delevingne (left), 27, claimed that Harvey Weinstein (right) told her she would never succeed as a ‘gay woman’ in Hollywood. The star also alleged that he encouraged her to hire a male escort to go to parties and events with her as a way to hide her sexuality, which is known as a ‘beard’ 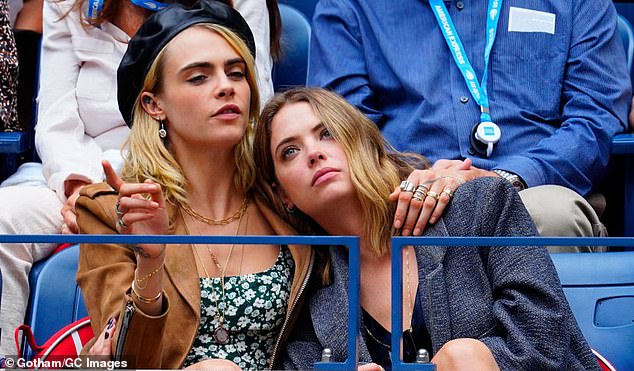 Delevingne (left) confirmed she was in a relationship with fellow actress Ashley Benson (right) in June (pictured at the 2019 US Open Women’s final on September 7, in New York City).

Delevingne, who was born in Hammersmith, London, revealed she is in a relationship with actress Ashley Benson in June.

She told E! News at the time: ‘It’s Pride [Month]. It’s been 50 years since Stonewall happened, and it’s been just about our year anniversary, so why not?

‘I don’t like the ‘official’ thing… it’s just a little something.’

Delevingne describes herself as sexually fluid and has dated both men and women.

Upon disclosing that information to Weinstein she claims he told her: ‘If I was gay or decided to be with a woman especially in public that I’d never get the role of a straight woman or make it as an actress in Hollywood.

Later while meeting with him at a hotel to discus a role, she claims he boasted about ‘all the actresses he had slept with’ and ‘inappropriate things of a sexual nature.’

After she declined an alleged invitation to his room, she claims to have been instructed that she go there.

‘I felt very powerless and scared but didn’t want to act that way hoping that I was wrong about the situation,’ she wrote.

Upon opening the door she claimed to feel ‘safe’ upon seeing another woman in the room.

From there, Delevingne claims Weinstein asked the two women to kiss.

As a distraction she told him she could sing and began in a bid to make the meeting more ‘professional.’ 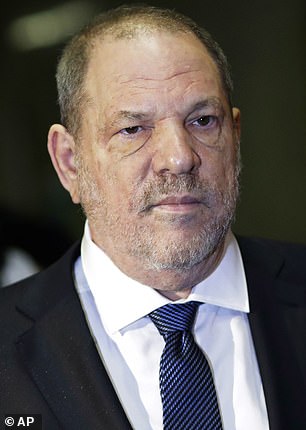 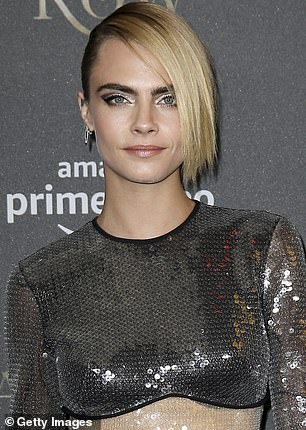 Delevingne (right) alleged that Weinstein (left) tried to get her to go up to a hotel room with her while discussing a movie role. Later when she did, Delevingne claims that he asked her kiss another woman in the room and then when trying to leave he blocked her way and tried to kiss her

Delevingne wrote: ‘After singing I said again that I had to leave. He walked me to the door and stood in front of it and tried to kiss me on the lips.

‘I stopped him and managed to get out of the room. I still got the part for the film and always thought that he gave it to me because of what happened.’

She described how the alleged incident left her feeling ‘guilty as if I did something wrong.’

Delevingne said she was initially hesitant to speak out for the fear of hurting his family.

‘I was also terrified that this sort of thing had happened to so many women I know but no one had said anything because of fear,’ Delevingne added.

Weinstein has entered not guilty plea to five charges of rape, sexual assault and ‘predatory assault.’ None of the counts relate to Develingne.

He has denied all accounts of non-consensual contact with women.