She ended her engagement to Jesse Metcalfe earlier this year amid speculation he had been unfaithful.

But Cara Santana has a new man in her life.

The actress, 35, looked as giddy as she packed on the PDA with a mystery man in Santa Monica, California on Monday.

Jesse who? Cara Santana packed on the PDA with a mystery man in Santa Monica, California on Monday

Cara could not stop smiling as she snuggled and smooched her new sweetheart inside and out of his Jeep Wrangled.

Cara’s new man tenderly cupped her head as he gave her a kiss on the lips.

Tuning out the world around her, Cara looked lost in the moment as she held her beau close.

Once their makeout session was over, the maskless couple stayed close as they walked down the street together. 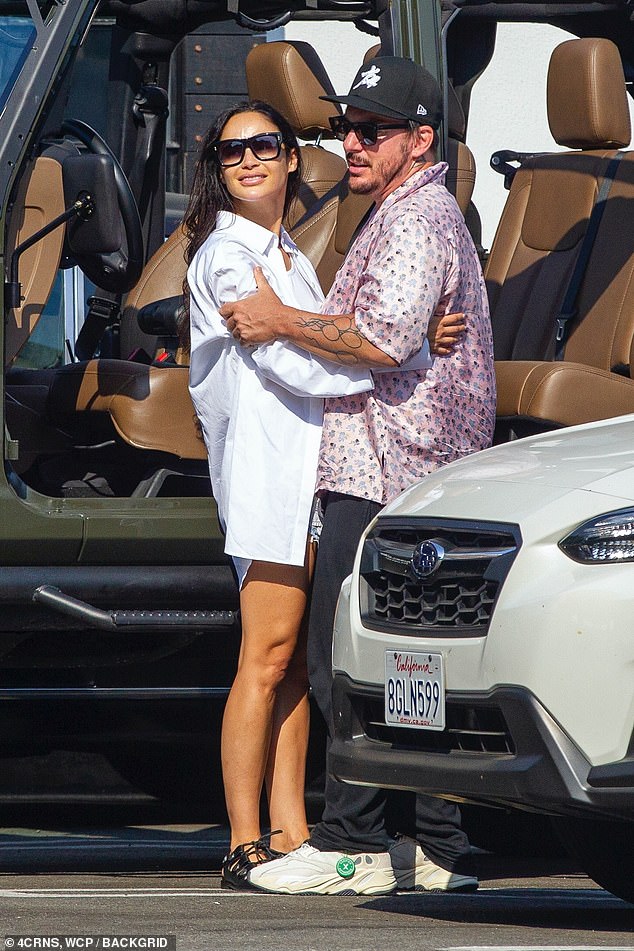 Hold me: The couple could not keep their hands off each other

Loved-up: Cara tenderly held her man close as they shared kisses against the car 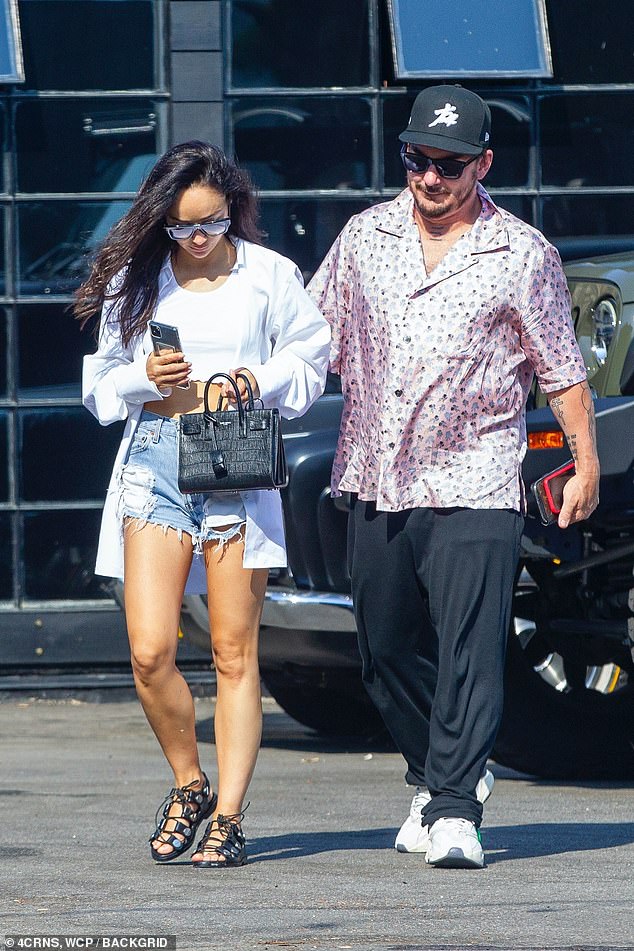 All about her: The mystery man followed Cara close behind

While things were getting hot between them, Cara was dressed to keep her cool in a white crop top and frayed shorts.

She topped off the ab-baring look with a long white shirt, gladiator sandals, and a black alligator print purse.

As for her tattooed beau, he wore a floral print pink button down, black sweats, and a cap. 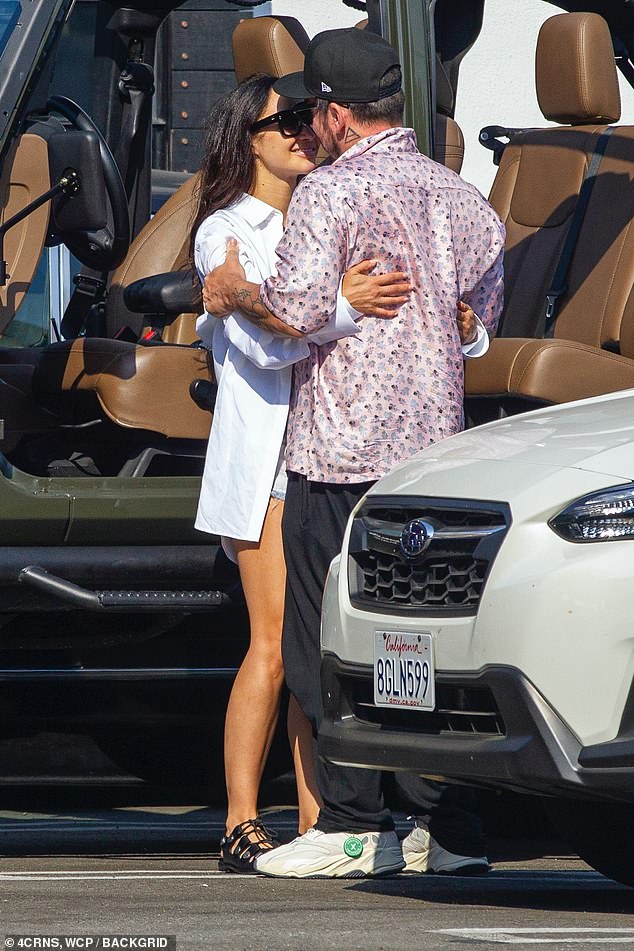 The look of love: Wrapped up in his arms, Santana beamed with joy

Eyes only for him: The couple could barely get enough of each other 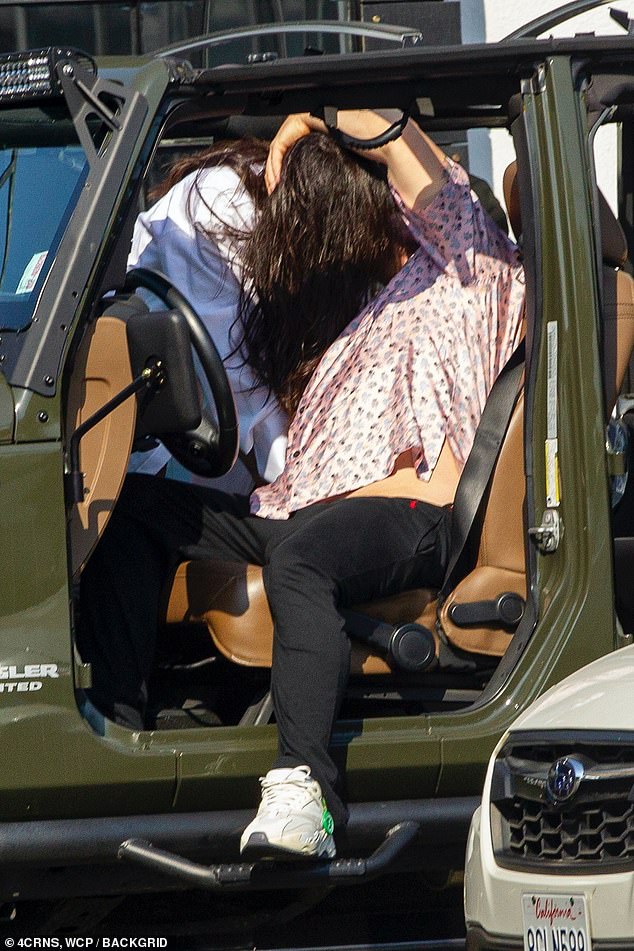 Car kisses: The couple appeared to be exchanging smooches inside their car

The new couple met a party in LA in May, and have been living together for the last two months.

A source exclusively told MailOnline that Jesse is serious about Corin after also spending time with her in Vancouver, where the pair had to quarantine for two weeks.

An insider said: ‘This is Jesse’s first relationship since the end of his engagement to Cara and he’s already taken things with Corin to the next level. 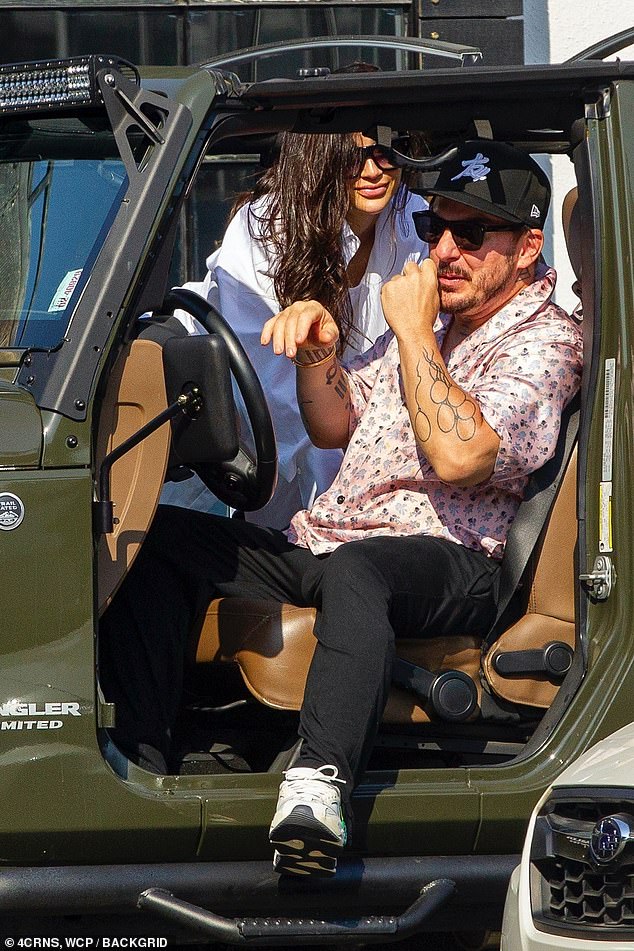 Tattooed beau: Cara’s new man sported an array of body art, including a tattoo of balloons upon his arm 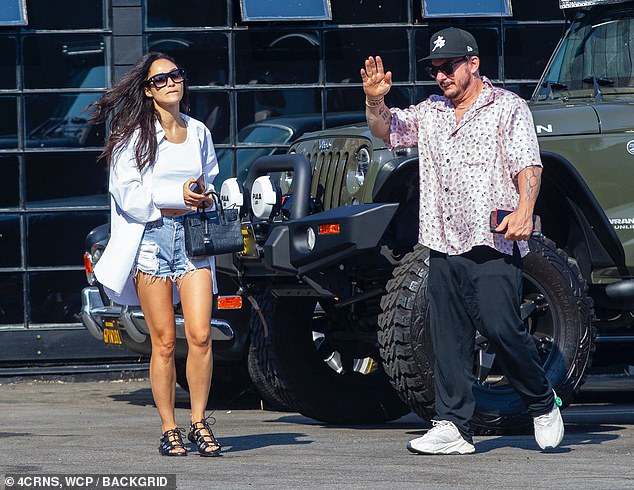 Leggy lady: The designer kept her cool in a white crop top and Daisy Dukes

‘He spent around two months in Canada filming for a new movie and Corin went with him while they’ve also lived together in Los Angeles.

‘Corin is drop-dead gorgeous and he’s over the moon to have found her, especially during a pandemic.’

The Canadian model boasts 188K followers on Instagram and is a close friend of Too Hot To Handle’s Francesca Farago, 26, who filmed Jesse alongside Corin in one of her recent TikTok videos. 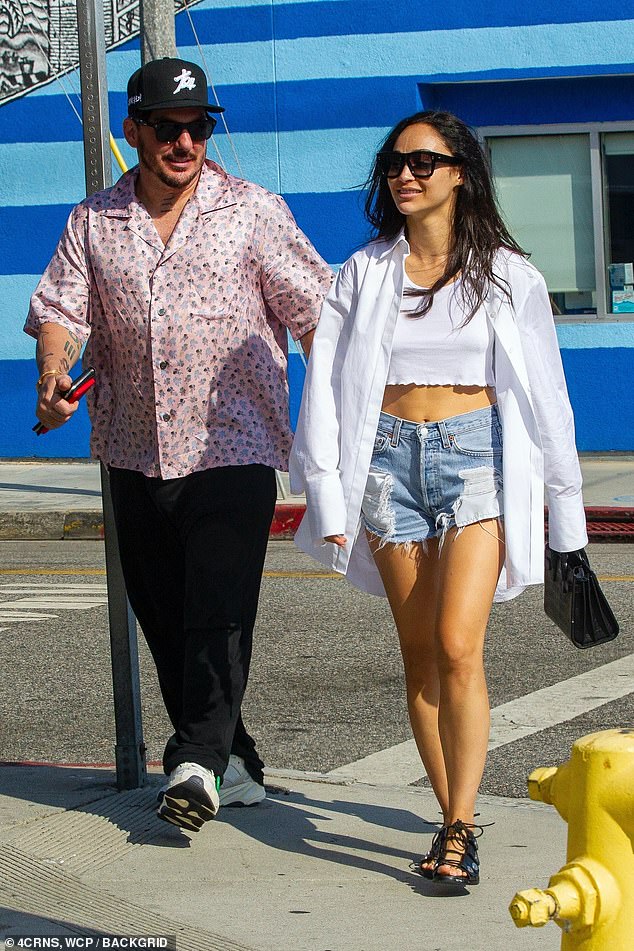 Into her: The mystery man gazed towards Cara following their PDA session

Beating the heat! Cara was somewhat scantily clad as she braved the sun rays 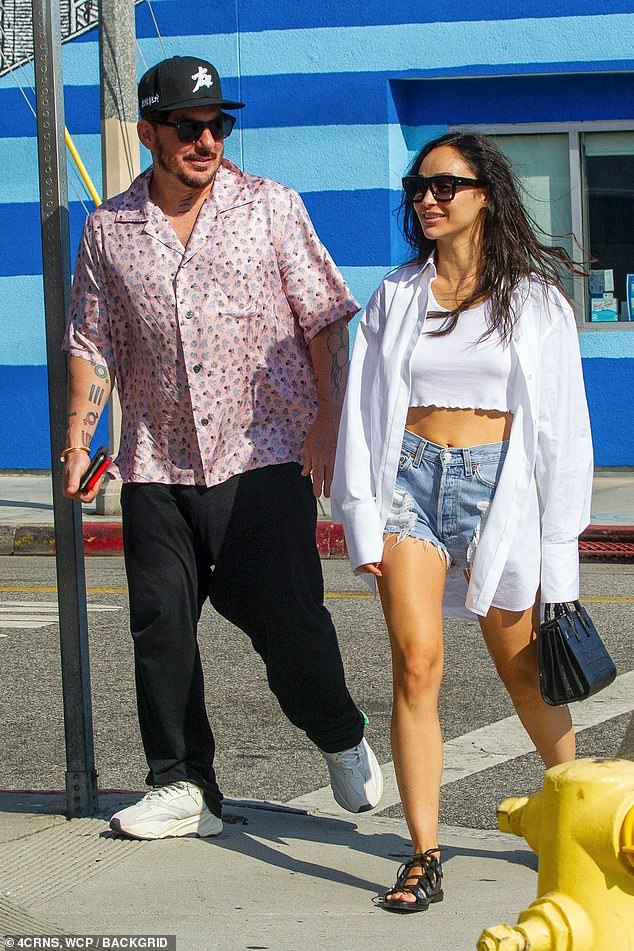 Toned and terrific: Cara put her flat abs on display during the outing 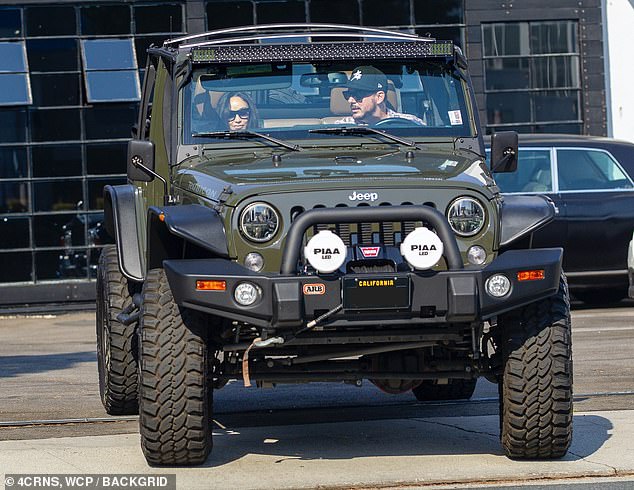 Hitting the road: The actress relaxed in the passenger seat as her beau drove her around

Jesse and designer Cara split after 13 years together in January amid speculation the John Tucker Must Die actor had been unfaithful.

Cara was ‘completely blindsided’ after Jesse was photographed hugging model Livia Pillmann on a lunch date and later that same day was pictured wearing the same clothes with actress Jade Albany Pietrantonio.

In January, a source said: ‘Cara is heartbroken and has completely shut down and not talking to many people.’

The couple continued living together throughout the coronavirus pandemic and were last seen on a socially distanced walk in May.

An insider added to MailOnline: ‘Jesse moved out from isolating with Cara to commit himself to Corin and he hasn’t looked back since.’ 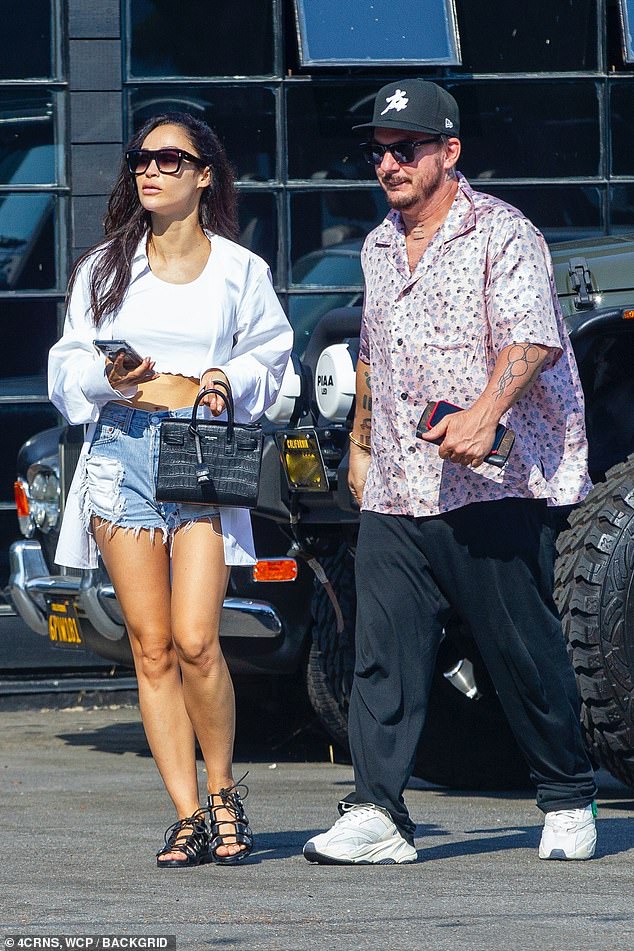 Off the market? Santana’s PDA outing comes after the end of her engagement to Jesse Metcalfe 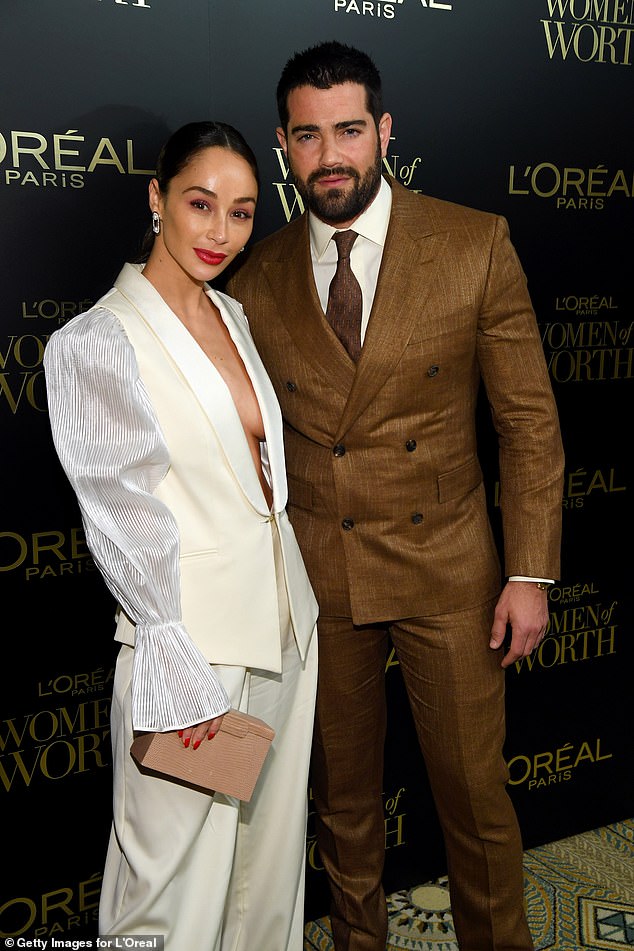 Splitsville: The couple ended their four-year long engagement amid speculation Jesse had been unfaithful (pictured 2019) 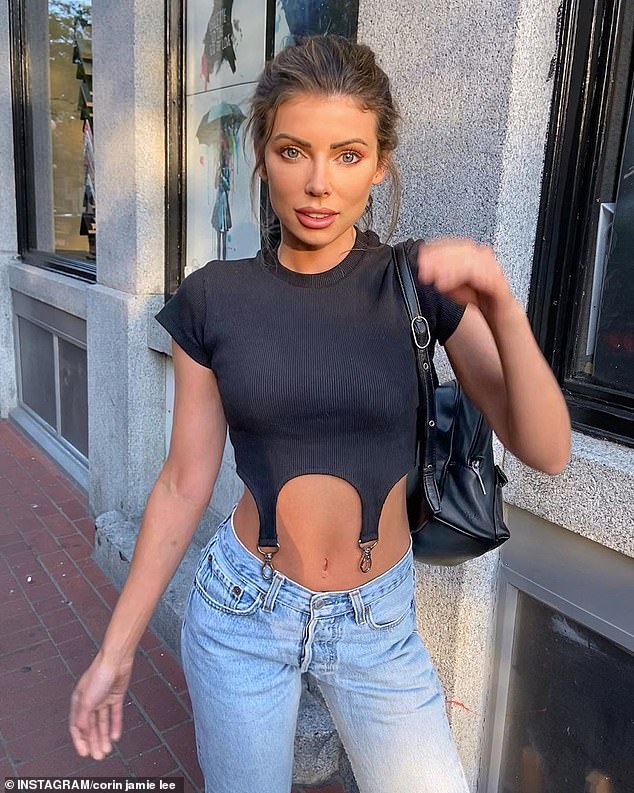 Moving on: Metcalfe is now dating Canadian model Corin Jamie Lee Clark, 27, and is even living with her