Caravan of protesters wielding plastic pitchforks march through the Hamptons

Hundreds of protesters – some wielding plastic pitch forks – gathered outside the homes of billionaires including Michael Bloomberg in the Hamptons to demand that wealthy New Yorkers pay higher taxes.

A caravan of more than 100 drivers and around 200 marchers descended on the affluent Long Island community on Wednesday.

Footage taken from the peaceful protest show dozens of residents taking to the streets while hoisting signs and chanting ‘Tax the Rich, Not the Poor,’ according to Page Six.

Drivers with the New York Taxi Workers alliance also led about 40 medallion cabs in the demonstration. The rise of ride share apps pushed taxi drivers into financial struggle before the pandemic, but the lockdown further exacerbated their debt.

Drivers chanted ‘No more suicides. No more bankruptcies,’ at one point during the protest, referring to the number of New York taxi drivers who committed suicide over financial woes. 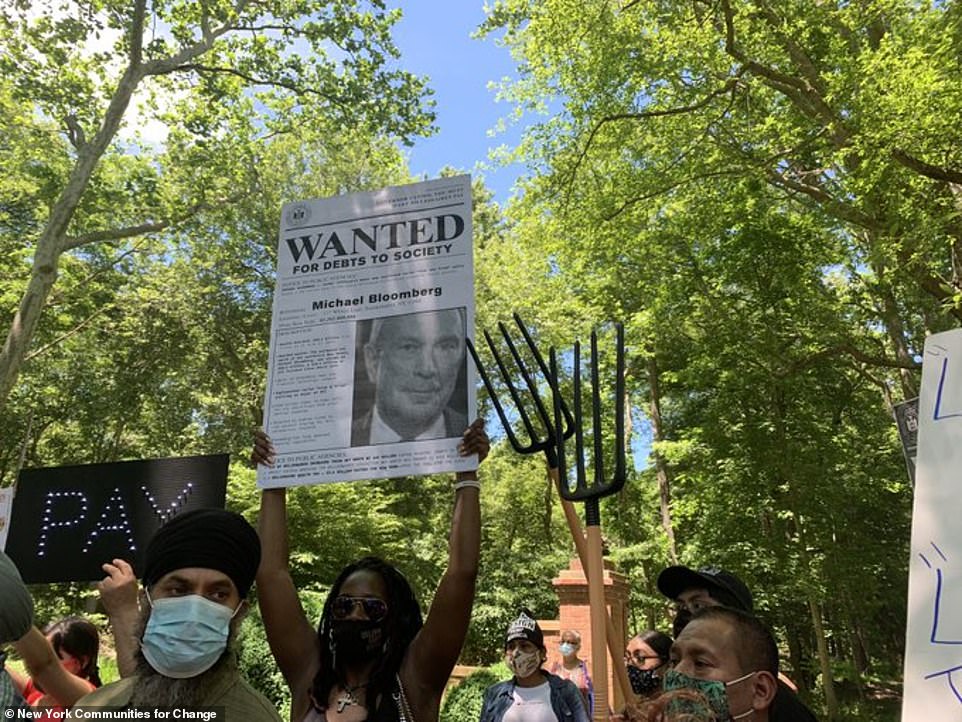 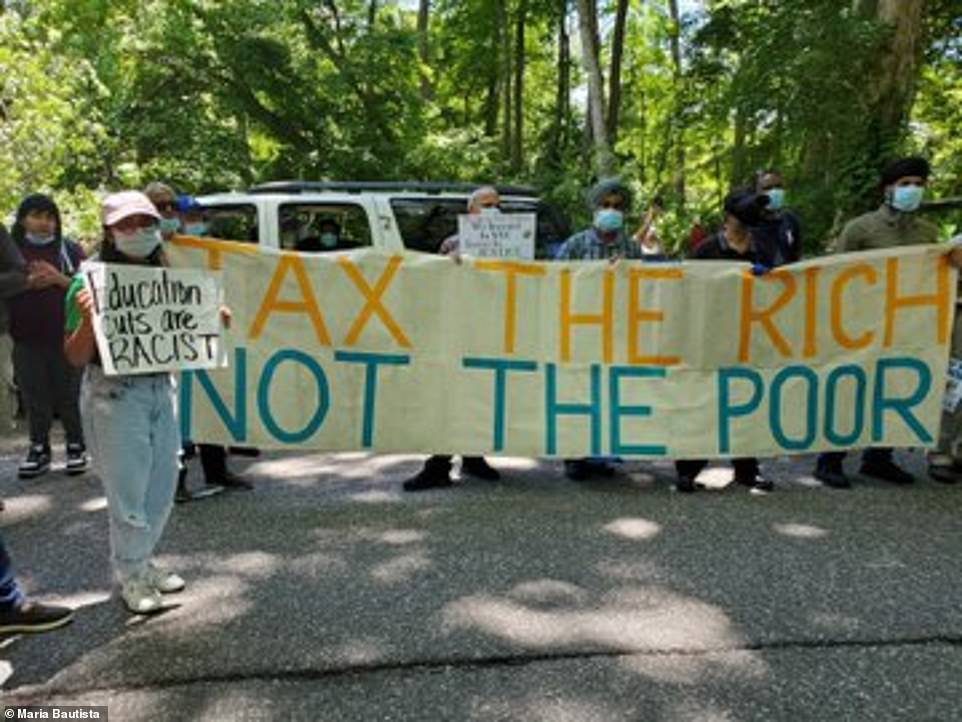 Protesters noted that while minorities and other low income communities struggled to navigate job insecurity during the coronavirus pandemic, reports said that billionaires actually increased their money by millions of dollars 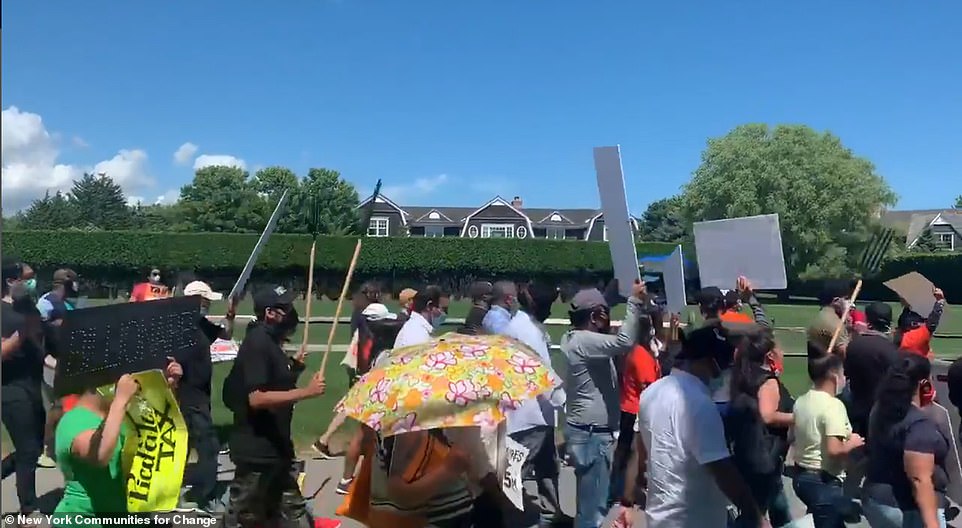 Some demonstrators wielded plastic pitch forks during the march while others hoisted protest signs and chanted ‘Tax the Rich, Not the Poor’ past sprawling mansions in the community

Some protesters were seen carrying plastic pitchforks, while others held ‘Wanted’ signs of local billionaire and Southampton resident Michael Bloomberg.

The group reportedly stood outside his luxurious $20million mansion and chanted, with some people referring to the former presidential candidate as a ‘looter.’ The average household income is around $155,649 in the Hamptons.

The protests came in response to Governor Andrew Cuomo’s suggestion to cut 20 per cent of funding to schools, local government and hospitals in an effort to cover gaping revenue shortfalls that hit the state during the coronavirus pandemic.

Instead, they said Cuomo should raise taxes for New York’s 118 billionaires that managed to become even richer during the pandemic. 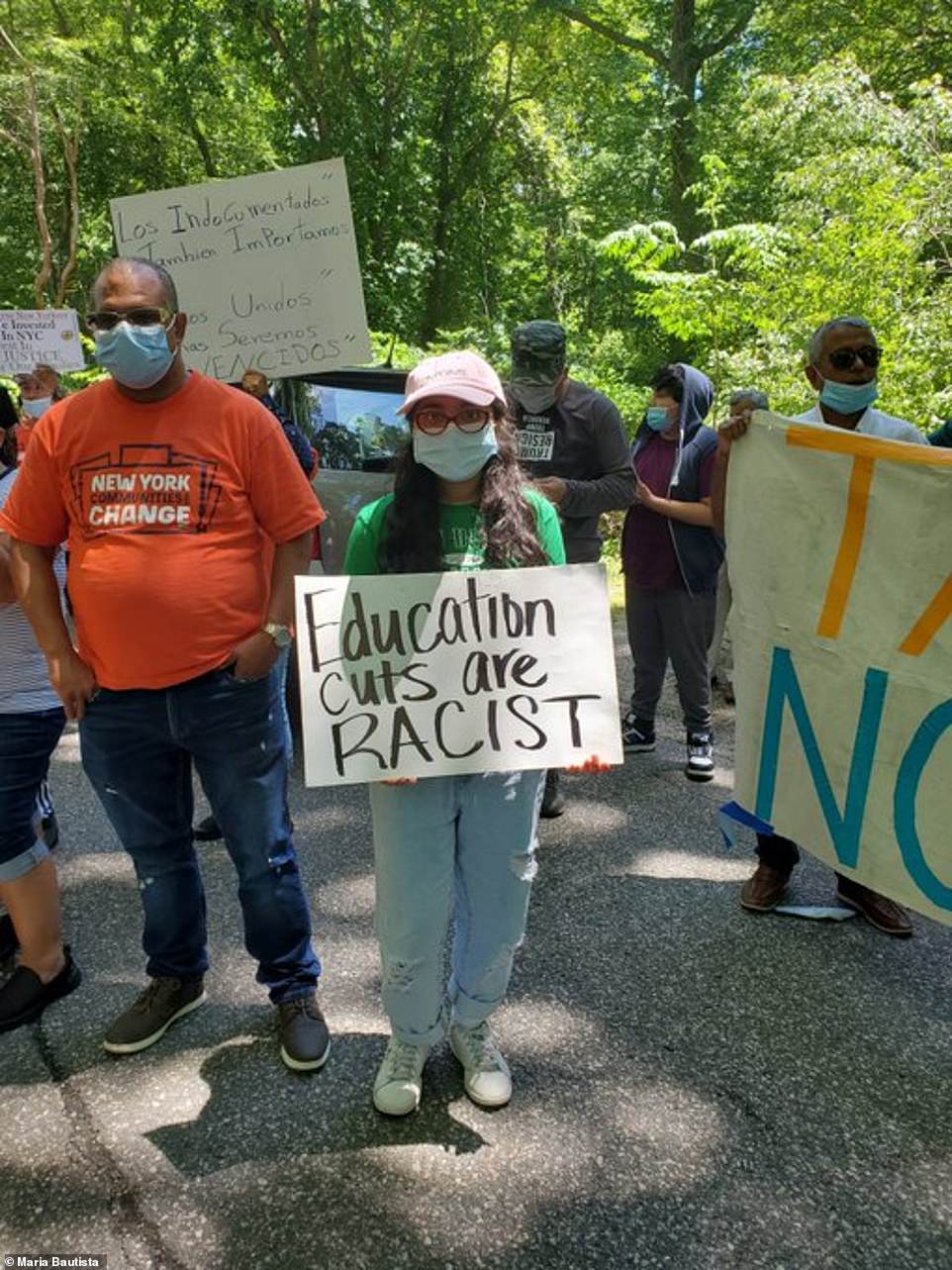 The demonstration sparked after New York Governor Andrew Cuomo suggested there could be budget cuts towards education, hospitals, housing and other social services due to shortfalls in state revenue caused the the coronavirus pandemic 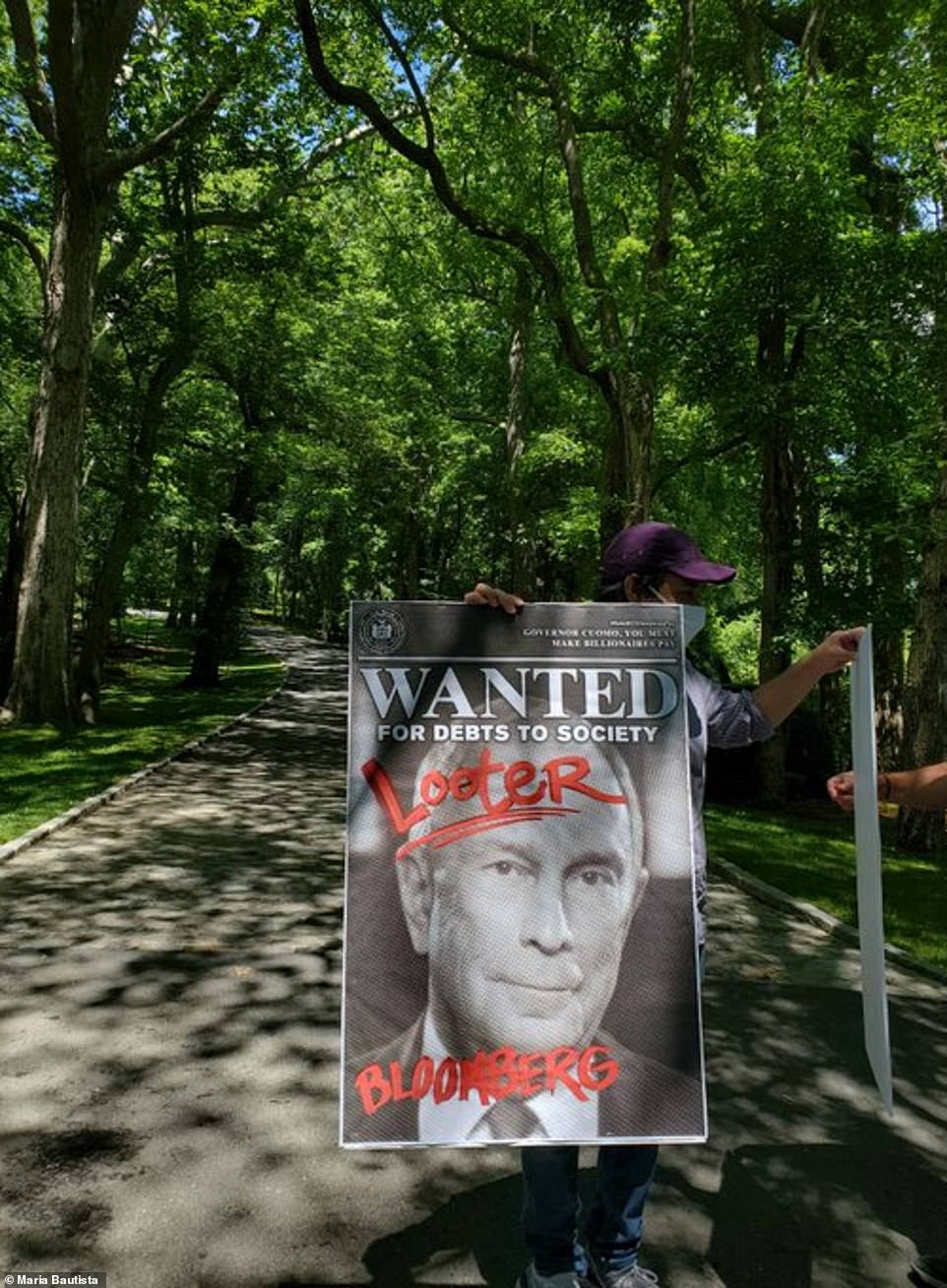 Alicé Nascimento: ‘Billionaires are experts in social distancing. They’ve chosen to live in their own world and are separate from realities of everyday people and the people whose lives they have a tremendous impact on’

Newsday reports that protesters cited data from Forbes that estimated the state’s billionaires have seen a collective net worth increase by $44.9billion from March 18 to May 15.

A report by the Institute for Policy Studies revealed that American billionaires have become nearly 20 per cent – or $565million – richer since the start of the coronavirus pandemic.

Meanwhile, nearly half of America’s 328.2 million population are out of a job as the pandemic continues.

Experts said the divide is being driven by the recovery of the stock market, which happened in part because of efforts from the Federal Reserve.

Wednesday’s protest over economic equality was the latest of several demonstrations nationwide over injustice. The last several weeks saw protests against police brutality and racism after the death of George Floyd. 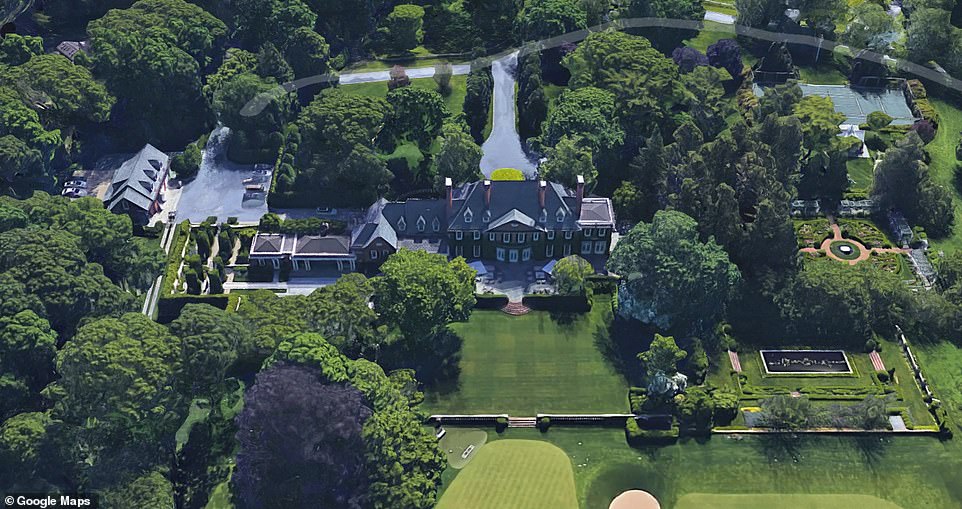 Pictured: Michael Bloomberg owns a mansion in the Hamptson reportedly worth $20million, which is around $40million less than his reported net worth of $60billion

‘Enough is enough — it’s time for New York State to raise taxes on the rich instead of cutting services for working people,’ said Alicé Nascimento, the Director of Policy & Research, New York Communities for Change.

Protesters, including members of the Shinnecock Indian Nation, also called for billionaires and the state to recognize indigenous land rights.

The Shinnecock Indian Nation specifically pointed to their claim of the Shinnecock Hills and the surrounding territory.

‘Billionaires take our land to build golf courses and mansions, profit from the ravages of coronavirus, and exploit our labor,’ said Genia.

‘It’s clear the real looters in New York are billionaires — and it’s time to make them pay their fair share so we can all thrive.’

Jennifer E. Cuffee-Wilson, a Shinnecock tribe member, told Newsday that she was discouraged by Bloomberg’s disparaging remarks about the Shinnecock Nation during his short lived presidential run. 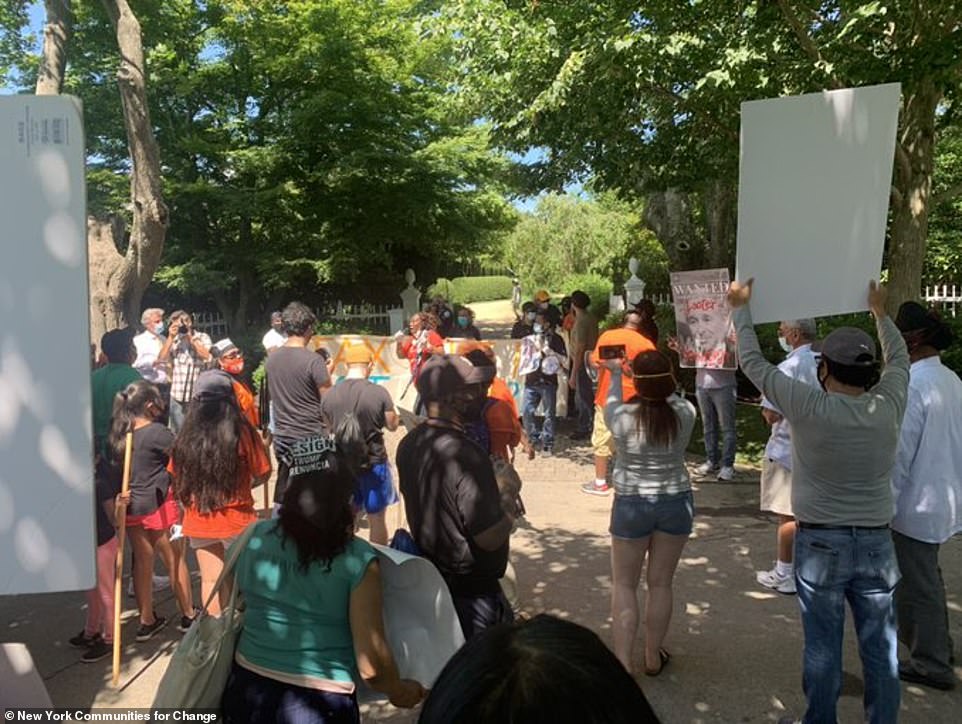 ‘There is a Native American tribe right near where I live, the Shinnecock Nation. It is just a disaster,’ Bloomberg told attendees at a rally in March.

‘There’s all sorts of problems . . . I will help them as well, because we just can’t have a group where there’s all the domestic violence and drugs and alcoholism. We’ve just got to do something.’

Cuffee-Wilson said she can no longer stand the blatant disrespect.

‘We’ve been dealing with this since 1492,’ said Cuffee-Wilson. ‘I’m done with your lies, your totally disrespecting us. You have shown us absolutely no respect whatsoever.’

Bloomberg, a former New York City mayor and businessman, has a reported net worth of $60billion.

Page Six reports that the march also led to the mansions of  Blackstone CEO Steven Schwarzman, worth $19.4billion, and real estate developer Stephen Ross, worth $7.6billion.

Margo ThunderBird of the Shinnecock tribe had just one message for Bloomberg: ‘His rent is due.’ 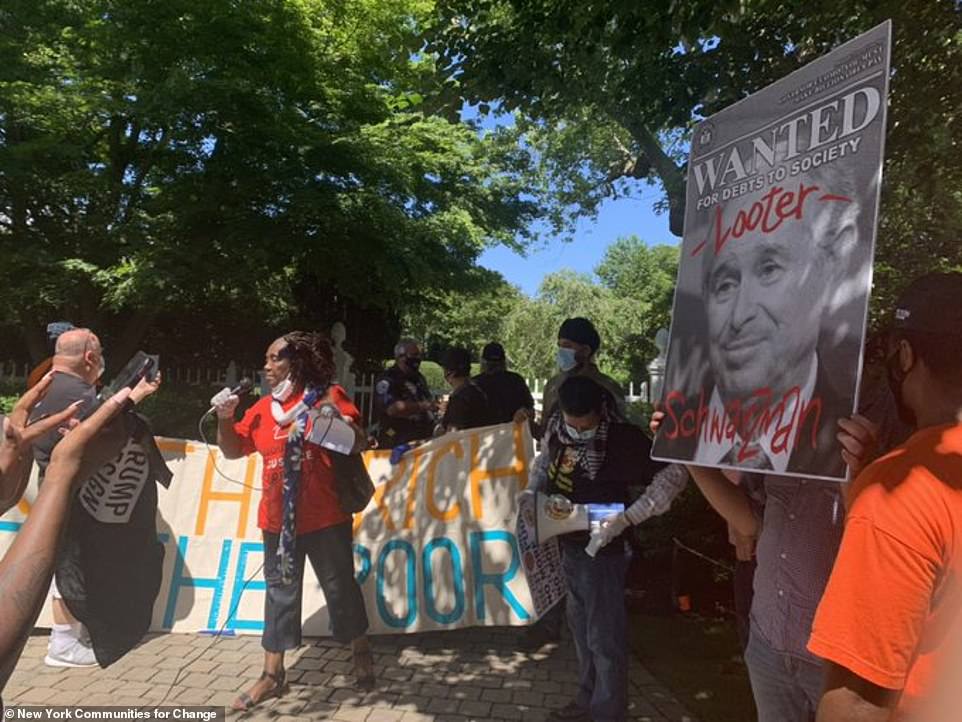 Rebecca Genia, a member of the Shinnecock Indian Nation, said ‘Billionaires take our land to build golf courses and mansions, profit from the ravages of coronavirus, and exploit our labor’ 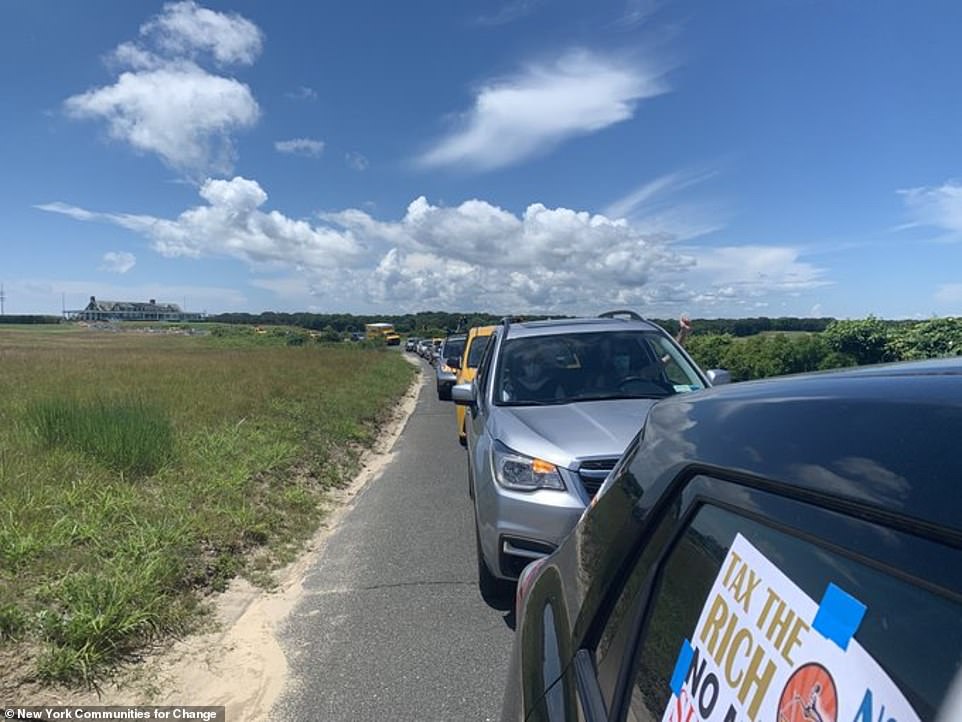 Drivers with the New York Taxi Workers alliance also led about 40 medallion cabs in the demonstration while chanting ‘No more suicides, No more bankruptcies’ in a reference to a number of driver suicides last year 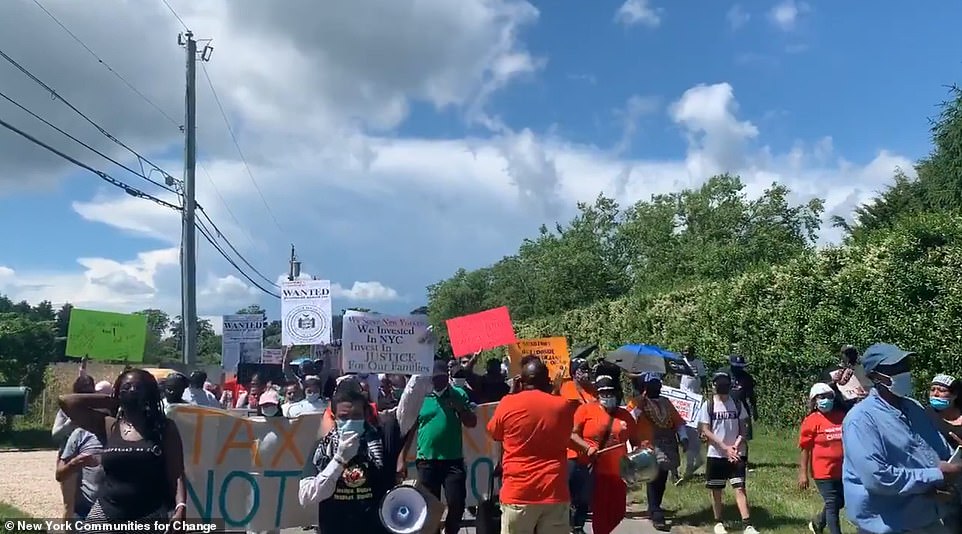 A report by the Institute for Policy Studies revealed that American billionaires have become nearly 20 per cent – or $565million – richer since the start of the coronavirus pandemic. Simultaneously millions of Americans lost their jobs.

‘Make billionaires pay, it’s that simple. It’s about helping people in need in the middle of this pandemic,’ said Henderson.

Several Southampton Town police were at the scene of the protest as protesters shouted, banged drums and sang.

‘Just because they have money does not mean they’re better than us,’ said Tanesha Grant of Manhattan.

Danny Hopkins, of the Long Island Progressive Coalition, warned officials that there must be a structural change to ensure equality for minorities.

Any economic uptick ‘is not going to be a real recovery unless you structurally change, and that means making billionaires pay their fair share. Otherwise, it will be on the backs of black and brown and indigenous and poor people to bear the brunt of this crisis,’ he said.

And according to Alicé Nascimento, billionaires who’ve attempted to hide away or flee the city amid the pandemic are a large part of the problem.

‘Billionaires are experts in social distancing,’ Nascimento reportedly told The Post. ‘They’ve chosen to live in their own world and are separate from realities of everyday people and the people whose lives they have a tremendous impact on.’