Cardi B and Megan Thee Stallion’s XXX-rated new music video for their NSFW song WAP has left some appalled, as they accuse the stars of being ‘without God’ and branded them ‘useless women’.

Cardi, 27, and Megan, 25, sent fans into a meltdown Friday with the release of their collaboration, along with a music video in which they stunned in a number of barely-there outfits.

While many praised the rappers for their late-summer hit that centers on sexual female empowerment, others were disgusted at the risqué scenes and visuals that show them lying with snakes and rolling together in a pool.

The surprising appearance of Kylie Jenner, 22, was also a cause for controversy as the make-up mogul was accused of cultural appropriation and of taking up space as a white woman in a power anthem from black women. 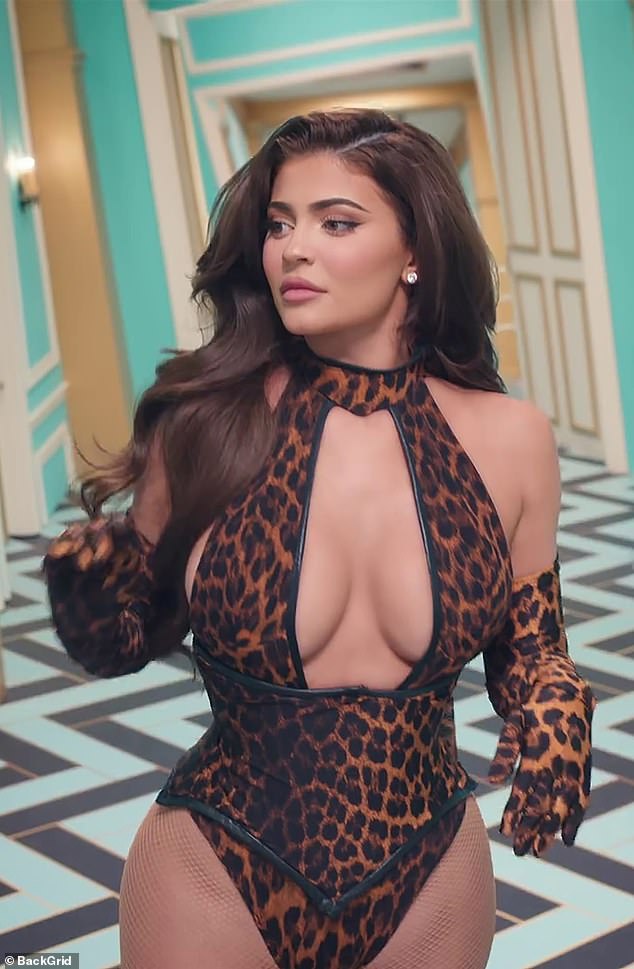 Among those to voice their disgust at WAP – which reached number 1 in the iTunes chart Friday – was James Bradley, a Republican candidate for Congress, who claimed that he ‘accidentally’ heard the song.

‘Cardi B & Megan Thee Stallion are what happens when children are raised without God and without a strong father figure,’ he wrote.

‘Their new “song” The WAP (which i heard accidentally) made me want to pour holy water in my ears and I feel sorry for future girls if this is their role model!’ 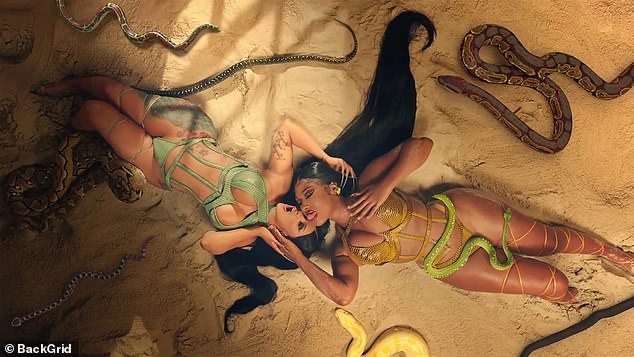 James Bradley, a Republican candidate for Congress, claimed the WAP video, pictured above, is ‘what happens when children are raised without God and without a strong father figure’ 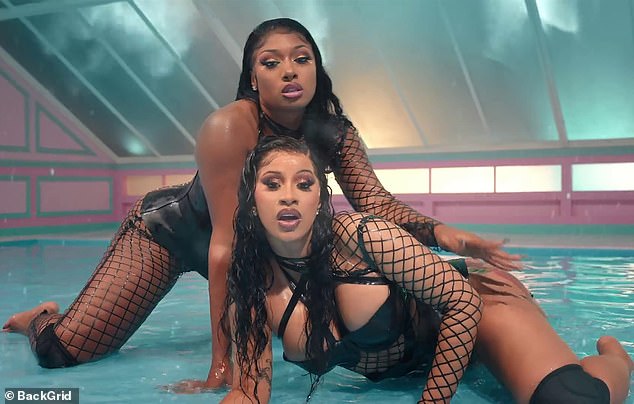 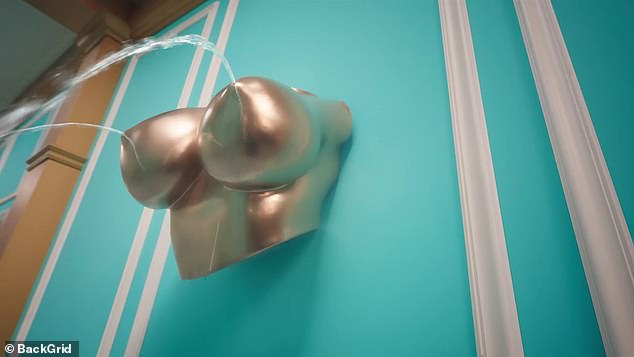 Bradley was branded as a hypocrite by some, comparing the criticism of WAP to how President Trump’s comments about ‘grabbing her by the p***y’ was dismissed as ‘locker room talk’.

‘You’re cool with a racist WHITE MAN talking about WAP but Black and Latino women make you want to pour holy water in your ears?’ asked Bishop Talbert Swann.

A few hours later, Bradley pulled back from his harsh words and said that the rappers had the right to make the video and release the song.

‘Secondly, while I personally take offense to the lyrics and messaging of this song, I absolutely respect her 1st Amendment right to make it,’ he added.

‘Also surprised that twitter doesn’t mind this kind of free speech but has a problem with conservative free speech.’

Yet, Bradley was far from alone in being offended. 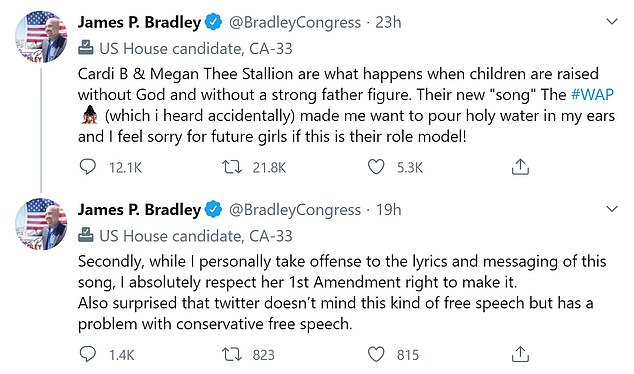 DeAnna Lorraine, a former congressional candidate who ran against Nancy Pelosi, accused the rap stars of setting ‘the entire female gender back by 100 years with their disgusting & vile “WAP” song’.

‘Remember, Bernie Sanders campaigned with Cardi B. Kamala Harris called her a role model. The Democrats support this trash and depravity!’ Lorraine tweeted.

Lorraine later recorded a video to Twitter in which she tagged Cardi B, again calling the song ‘disgusting’.

‘Listen up, you useless woman,’ she said.

‘Women are worth more than you think! Perhaps that’s why you can’t keep @OffsetYRN loyal?’

In the video, Lorraine claimed that Cardi B was promoting unsafe sex ‘so they could have an abortion or grow up with an unwed father, are you kidding me?

‘Cardi B is infecting the black culture with this depravity,’ she said.

Lorraine, who ran against Nancy Pelosi, claimed they were setting women back 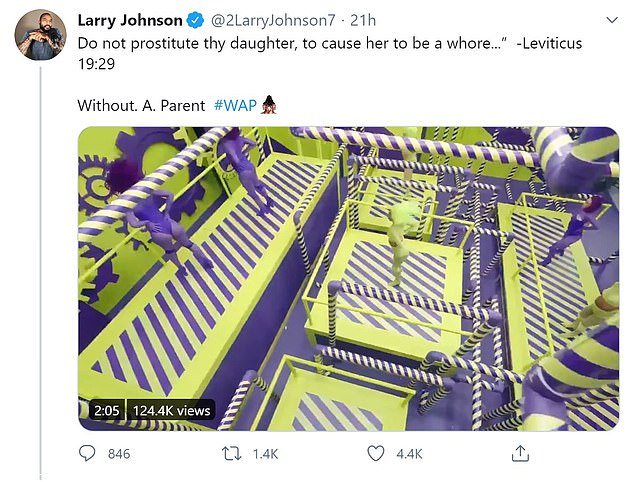 Podcast host Larry Johnson tweeted a clip of the video along with the Bible passage: ‘Do not prostitute thy daughter, to cause her to be a whore… -Leviticus 19:29‘

‘Disgusts me how they portray themselves. These people are not role models, they need Jesus,’ Twitter user Kay replied to his tweet.

‘Cardi B teaching her daughter how to be like her, prostitute, stripper, etc. smh,’ added @LaurJeanF.

‘Wow. My sister is an engineer. Now that is something to be proud of. She uses her brain, not her body. She is smart/intelligent and a role model for her kids. @theestallion the same.’

Christian Walker, who describes himself as a free-speech radicalist, accused the Democratic Party of aligning themselves with ‘trash like Cardi B and Megan Thee Stallion as if they are representative of my skin color.’

‘Stop uplifting this lowclass vermin putting out songs like WAP, and uplift education,’ he continued. 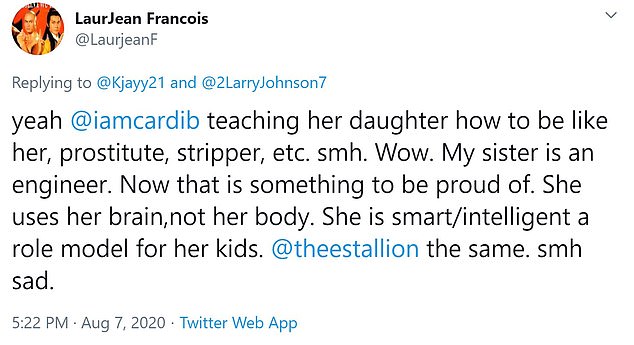 Other social media users also voiced their disgust at the video

‘Women have been so devalued in this society that they have now embraced their oppression as empowerment,’ said @TheReallsalbn.

‘Instead of songs that highlight the beauty of their minds, they are encouraged to make filth about their WAP.’

Others praised and encouraged the ‘filth’.

‘Cardi B’s new song #WAP is the nastiest dirties freakiest song my Christian ears have ever heard and I’m ready to play it everywhere I go,’ user @mitchi1489 excitedly tweeted.

‘The visuals for WAP are incredible, the song is pure filth, my poor innocent self,’ user @sachindattani joked. But fan @DonPusha said, ‘WAP lyrics are pure filth. I’m here for it.’

‘Shout out to all the teens quarantining who just wanna blast “WAP” without yr parents hollering to turn off that filth,’ said Time TV critic Judy Berman.

‘Your folks are wrong, and you are the real heroes.’ 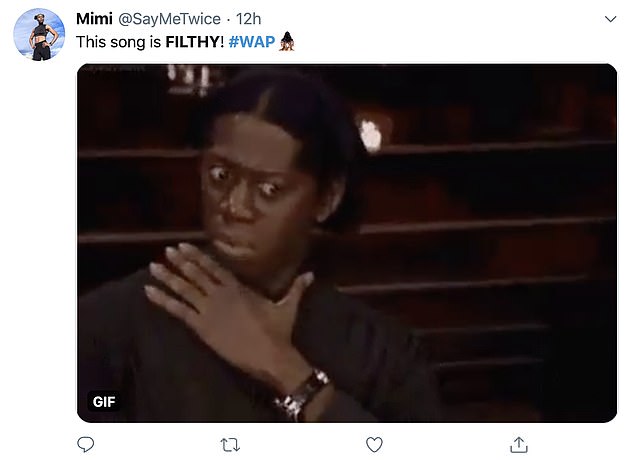 However, for some, it was the sight of the 22-year-old reality star dressed in a sexy leopard print ensemble – that caused the most controversy online.

The reality TV star was trashed for appearing on the video even though the other women featured were black or Hispanic.

Others accused Kylie of being a ‘culture vulture’ and felt she was taking away from two Black artists in the video, while ‘#NotKylie’ began trending on Twitter.

Author Roxane Gay tweeted: ‘I enjoyed the WAP video. Bright and colorful and wholesome. Educational,’ adding: ‘But why the Kylie Jenner interlude? No one asked for that.’

‘When you vibing to Cardi & Meg WAP then you see kylie jenner/kardashian face instead of Saweetie,’ tweet user Mr. Gemini.

‘Not Kylie Jenner,’ others tweeted in horror.

‘If they were looking to include a white woman in the WAP video, they could’ve easily chosen Anne Hathaway instead of Kylie Jenner,’ joked user Agu Nwanyi.

In fact, some of the negative responses were so strong that there was even a Change.org petition started to have Kylie removed from the video, started by a user named Nini who said: ‘The video was perfect until we saw K and I wanted to throw my phone.’

The petition had more than 47,500 signatures as of Saturday morning, with those who signed leaving their reasons for doing so in the comments. 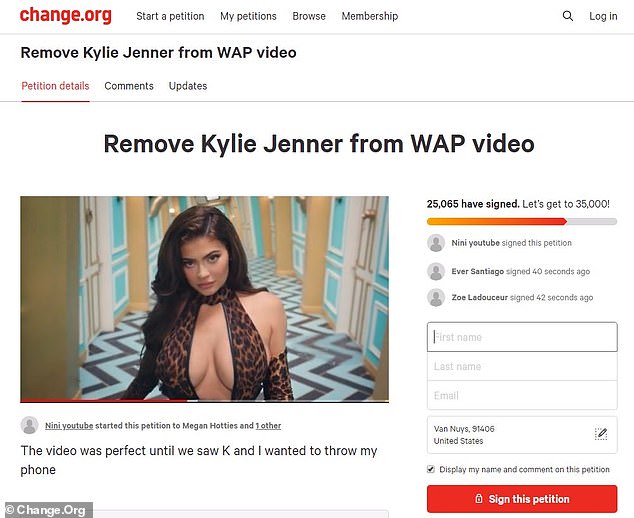 One fan started a Change.org petition to get Kylie Jenner removed from the video 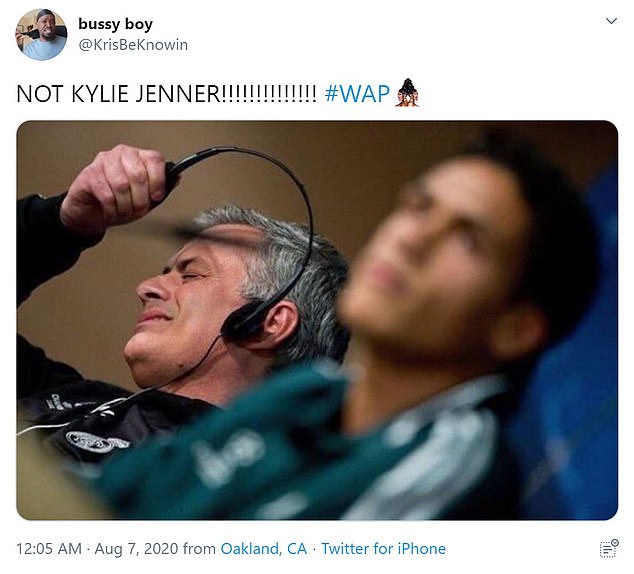 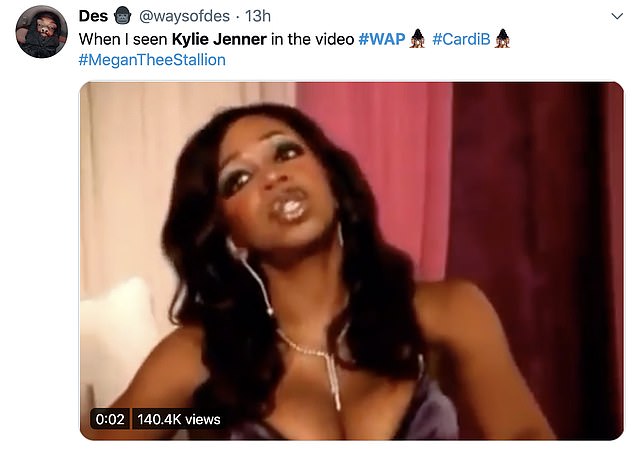 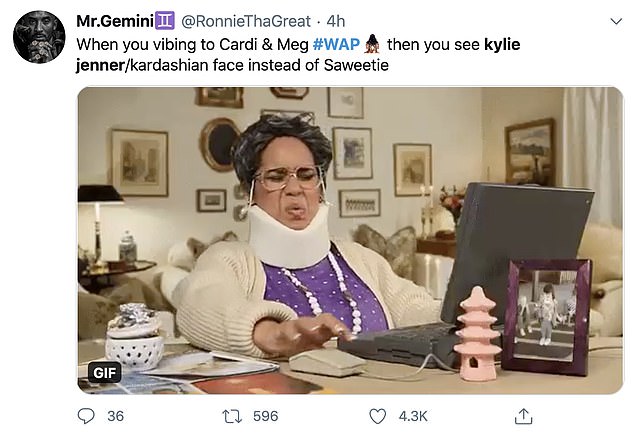 ‘I was happily enjoying my daily cup of brown women until that culture stealing colonizer showed up and made me spill. Thank you,’ wrote Aaliyah Parra.

‘I was so disappointed in the decision to feature Kylie – the fact that it was Kylie’s feature pretty much front and centre over Normani proves that white woman are consistently chosen over any other,’ said Karen Ford.

Others also claimed Rosalia should not have been included as she’s Hispanic.

‘I ain’t want to see kylie Jenner nor Rosalia in the WAP video, that video was for coloreds only,’ tweeted @cidnneyhart. 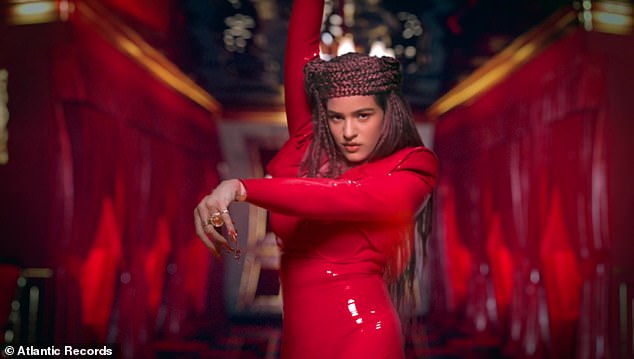 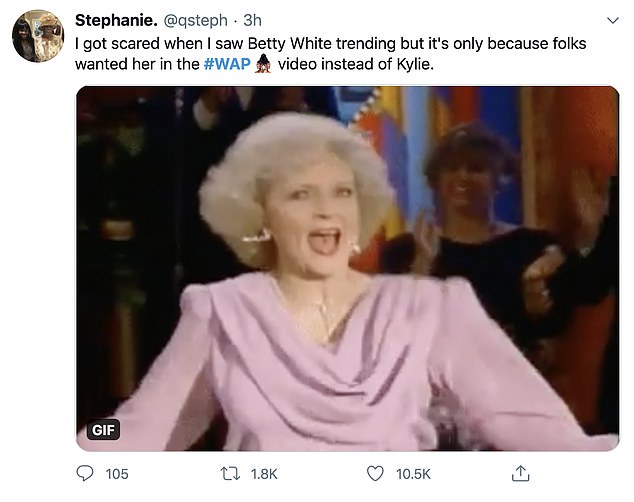 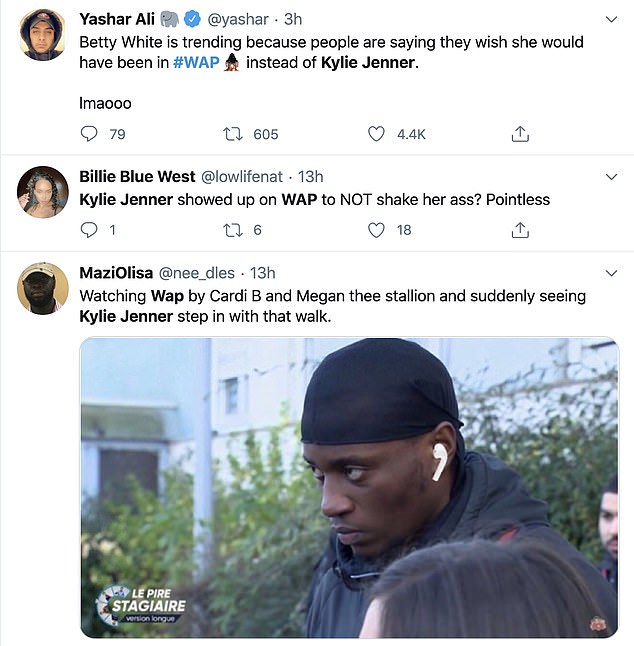 While Cardi and Megan received mostly praise, the same could not be said for Kylie

Meanwhile, Golden Girls star Betty White then became a trending topic, as Twitter users suggested she should have been given the cameo spot over Kylie.

‘I got scared when I saw Betty White trending but it’s only because folks wanted her in the #WAP video instead of Kylie,’ @qsteph tweeted.

Cardi B appeared to respond to the criticism of Jenner later Friday although did not explicitly name her.

Instead, she thanked all the women who were in the video and said that it was about ‘different races’ and ‘different backgrounds’.

‘I wanna say thank you to every woman that was a part of my video! The fact that you made time in your schedules means a lot to me!’ she wrote.

‘It was so important to me to include different women that are different races and come from different backgrounds but are so powerful and influential.’

Cardi and Hot Girl Meg released the surprise collab just days after announcing it, and the video has since garnered more than 24million views on YouTube.