Clase maestra, if Pep Guardiola requires a translation on Monday morning. Master class. He will have been seeing that phrase a lot this season and his English may not yet extend to the outer reaches of the superlatives.

And what a clase maestra this was. Forget the gulf between the teams, one walking away with the Premier League, one scuffling with all their might to join it. Cardiff are a Neil Warnock team, with all that implies. They are hard-working, physical, uncompromising.

Warnock is a specialist at busting teams out of England’s second tier and has been responsible for some decent cup surprises, too. This was never going to be one of them. Instead, it was City who shocked: with their invention, their speed, the relentlessness of Guardiola’s attacking philosophy. 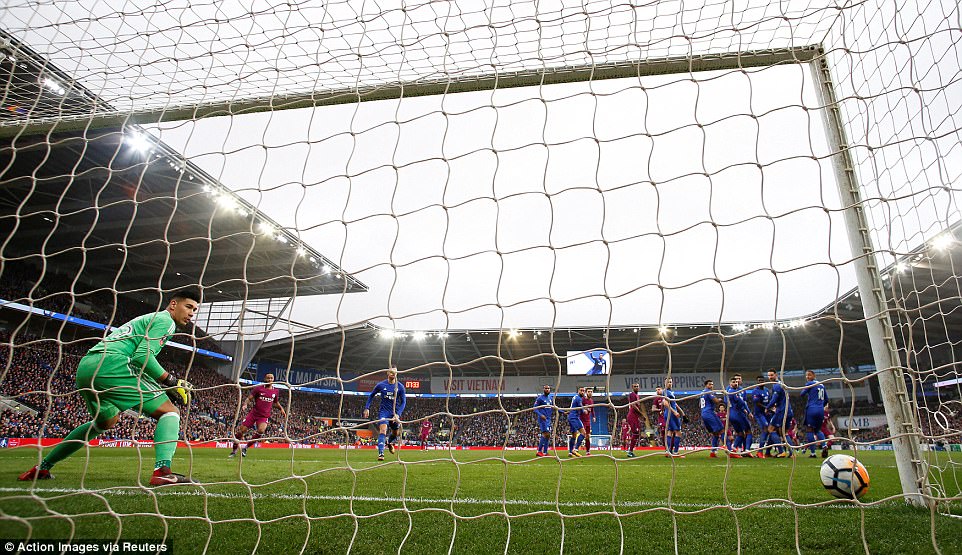 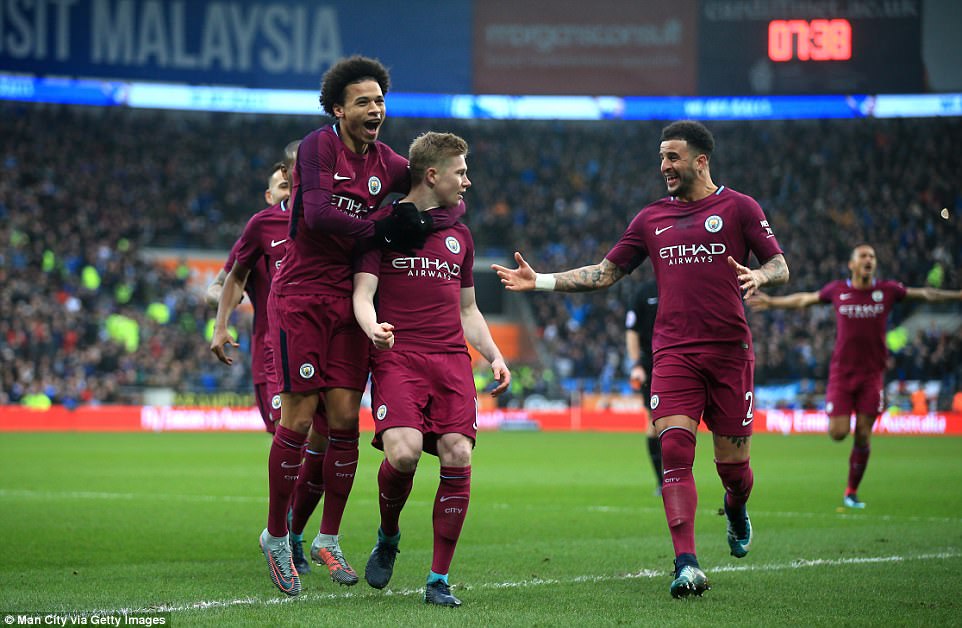 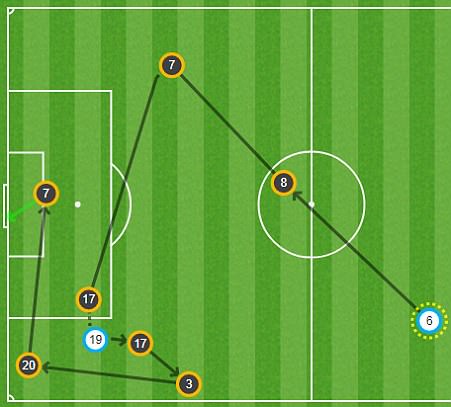 Warnock thought he had prepared his players for this new wave: but there were times when they looked nothing less than overwhelmed by what they were up against. City are a team that think differently; that approach goal and score in a unique way. Kevin De Bruyne’s free-kick for the first was a case in point. There were 11 blue shirts on the field and it appeared not one of them was thinking what De Bruyne was thinking.

Ilkay Gundogan had tested Cardiff goalkeeper Neil Etheridge with a shot from range and when the ball returned to him, Joe Ralls slipped in his desperation to close him down and ended up taking out the City midfielder on the edge of the area. As Gundogan received treatment, De Bruyne had time to consider. Maybe he revisited footage he had been shown of Cardiff defending free-kicks.

Maybe he recalled something Guardiola told him after his scouting mission to watch Cardiff’s third round replay at Mansfield. Perhaps it was a simple flash of inspiration. Whatever, as Cardiff’s wall jumped in unison to defend his free-kick, De Bruyne passed it under them, rolling the ball along the floor and tightly in at the near post. It passed under Bruno Ecuele Manga, but they were equally culpable. So precise, so perfect was his strike that Etheridge didn’t even move. It was as if the ball arrived from outer space. 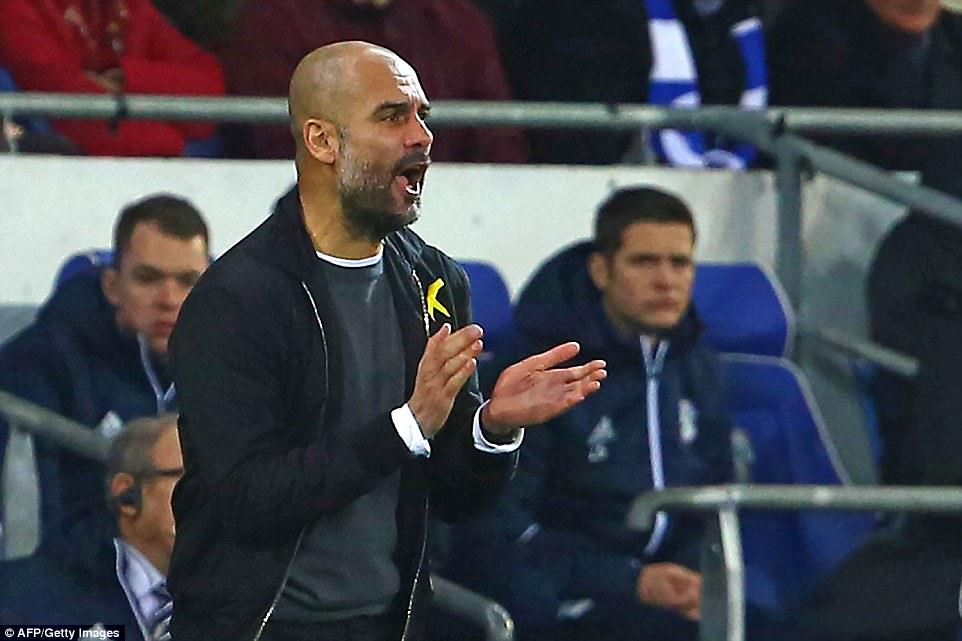 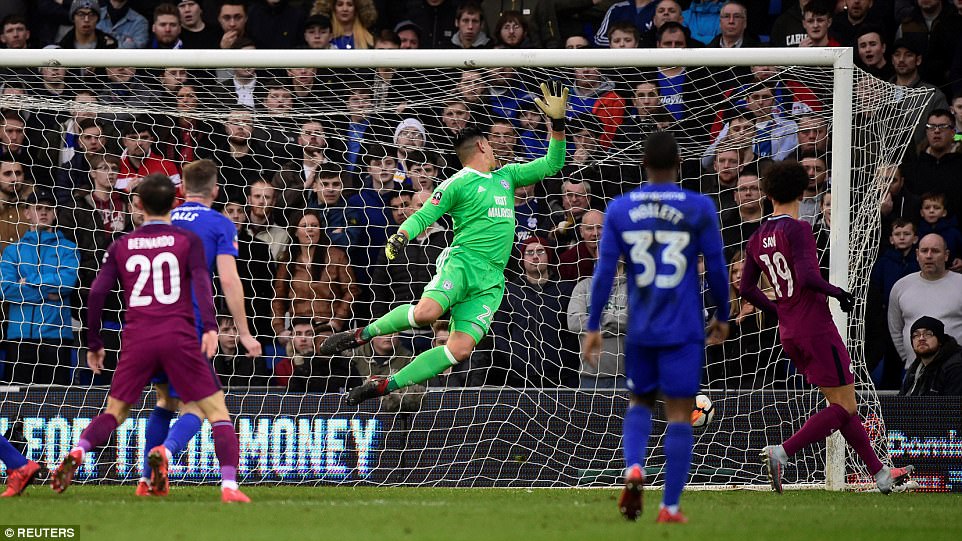 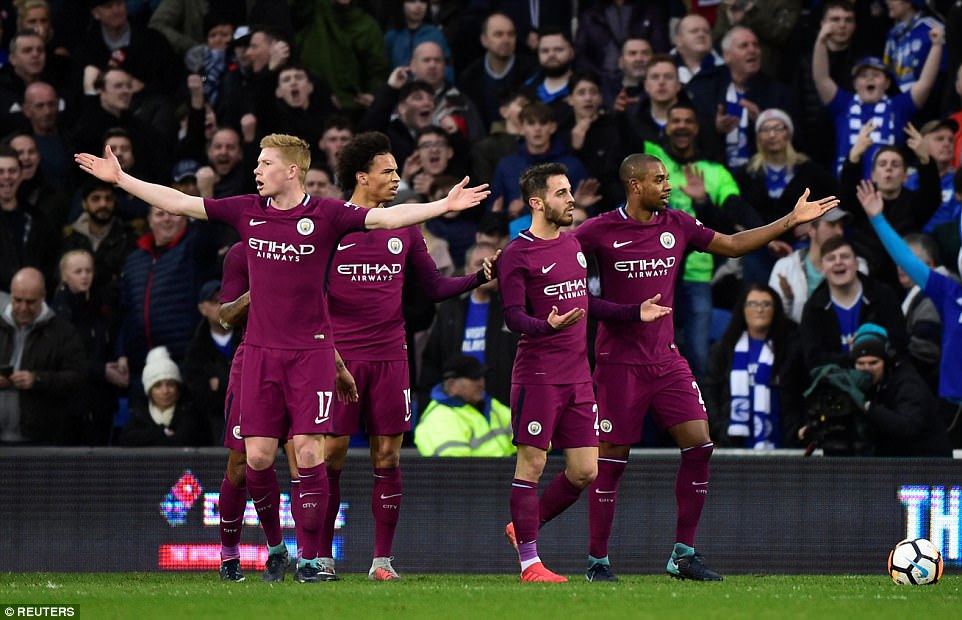 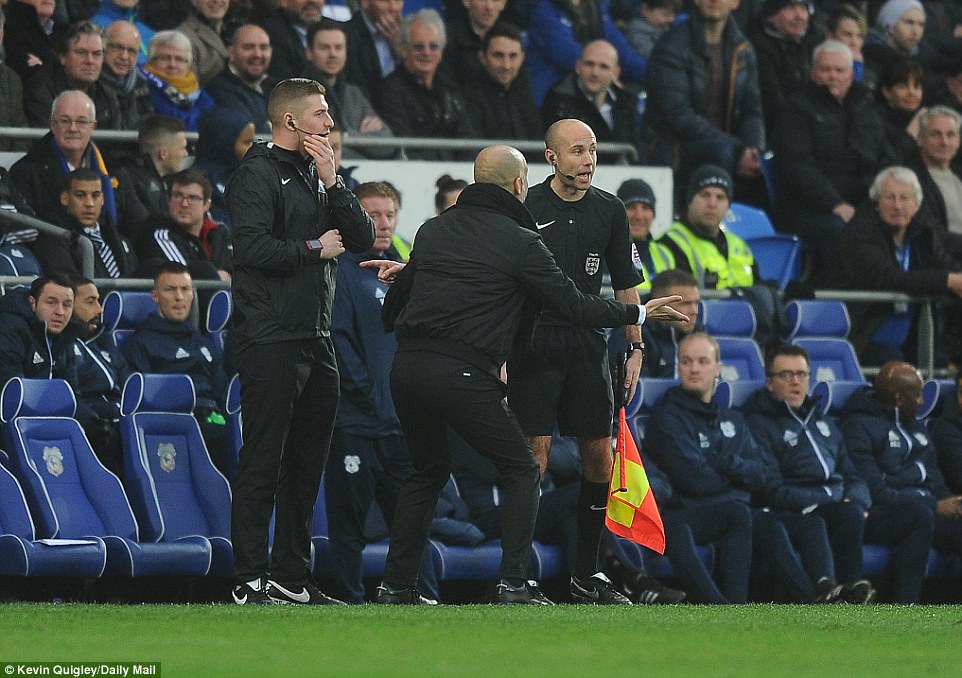 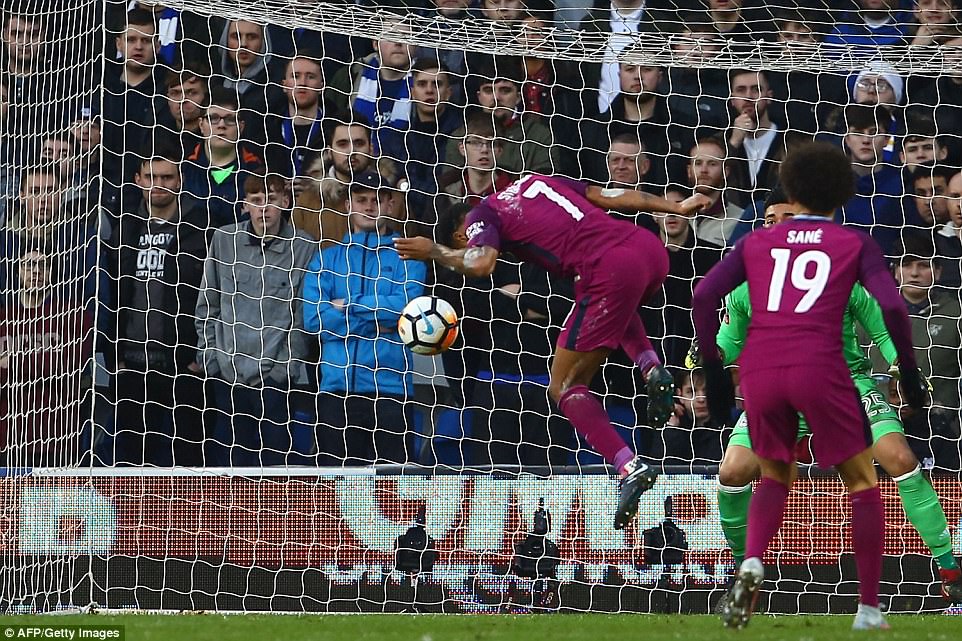 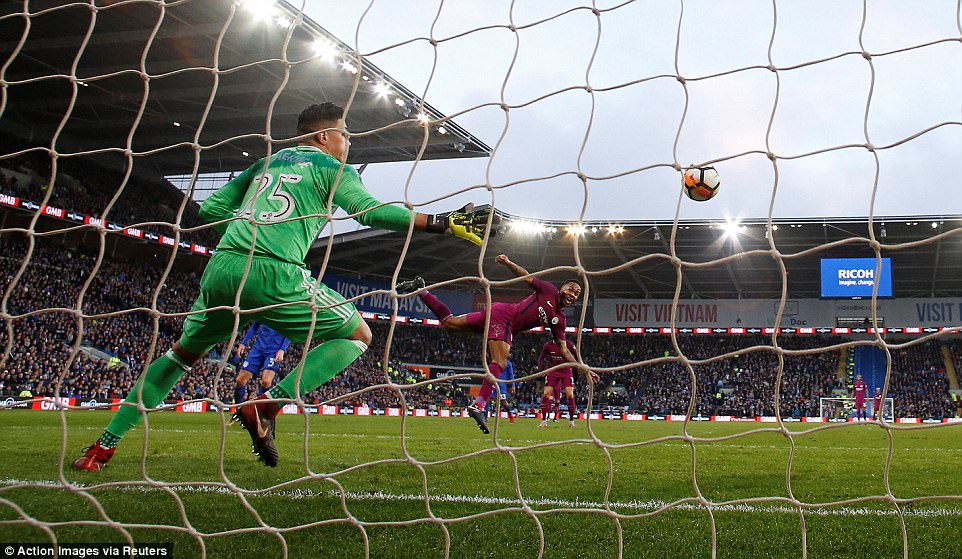 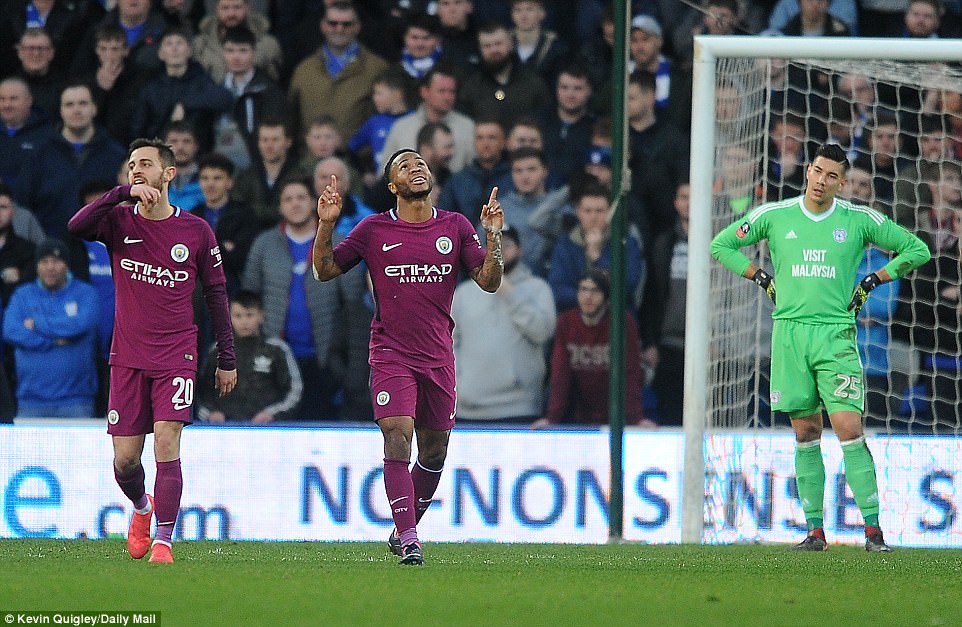 And that is what City are like at their best. Extra-terrestrial. Warnock said he had his players chasing pieces of paper in training this week in an attempt to mimic their movement and he probably wasn’t joking. The problem is pieces of paper cannot finish like De Bruyne, cannot cross like Bernardo Silva or break with the purpose of Leroy Sane. Paper is flimsy and without mission. City are direct and know precisely what they are about.

Take the second goal, which began with a typically bright exchange of passes and culminated in Bernardo Silva put in on the left side overlap. A good move was then made exceptional by the speed with which he crossed – the ball arriving so early it completely flummoxed the Cardiff defence who were not in position to repel. As a result, Raheem Sterling, one of the smallest players on the pitch rose to defeat Etheridge with a header. He didn’t need to be Andy Carroll to score. To be fair, Andy Pandy would have fancied his chances, so sublime was Silva’s set-up.

Full credit to Cardiff for not going down by a rugby score, even if they got rather lucky on more than one occasion. In the 25th minute, for instance, when De Bruyne worked the ball through to Bernardo Silva who shot fair whistled into the roof of the net, leaving Etheridge no chance. He wheeled away in celebration only to be alerted to a linesman’s flag by the mocking jeers of the locals. 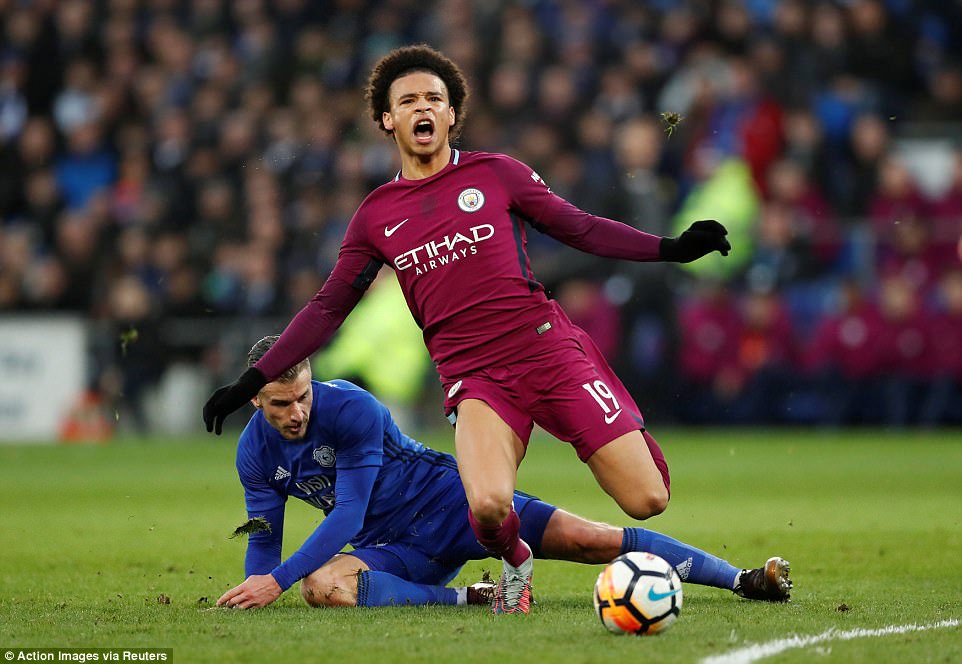 Sane was a victim of a horror challenge by Cardiff’s Joe Bennett, whose late tackle brought the winger down to the ground 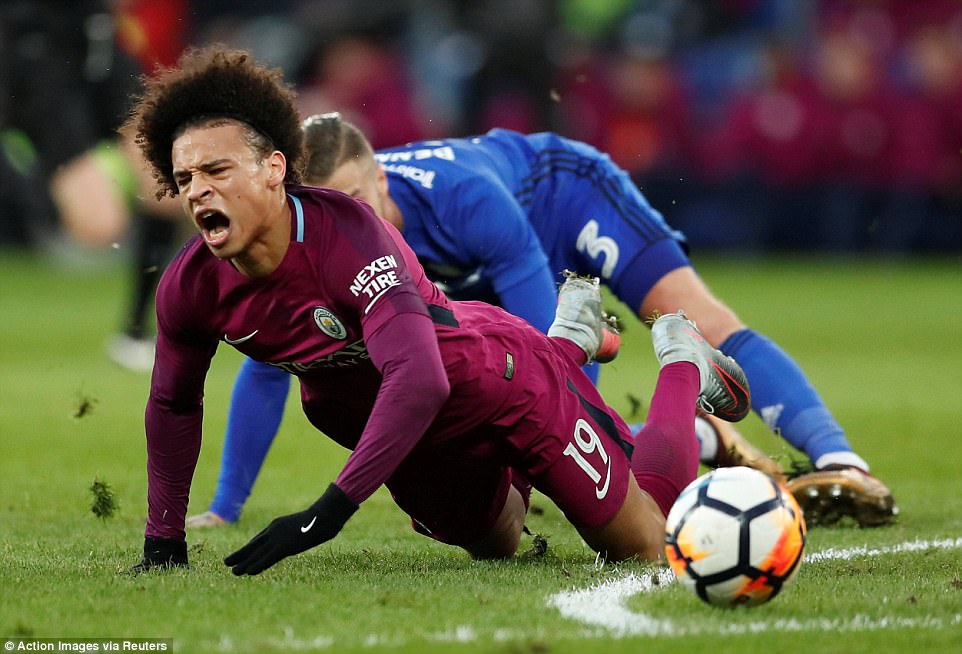 Sane was left in pain after the challenge, which resulted in Bennett being awarded a yellow card from referee Mason 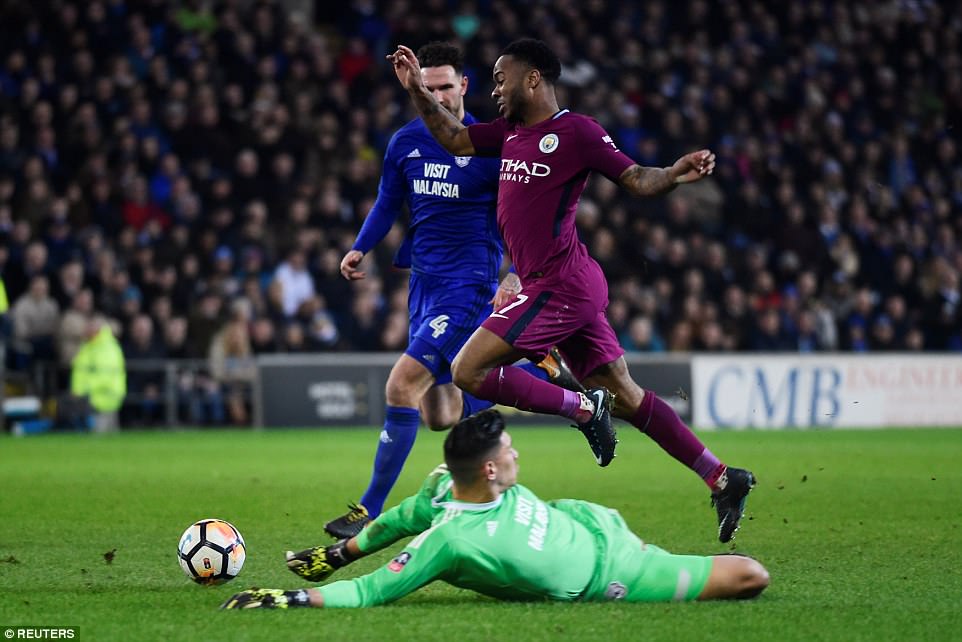 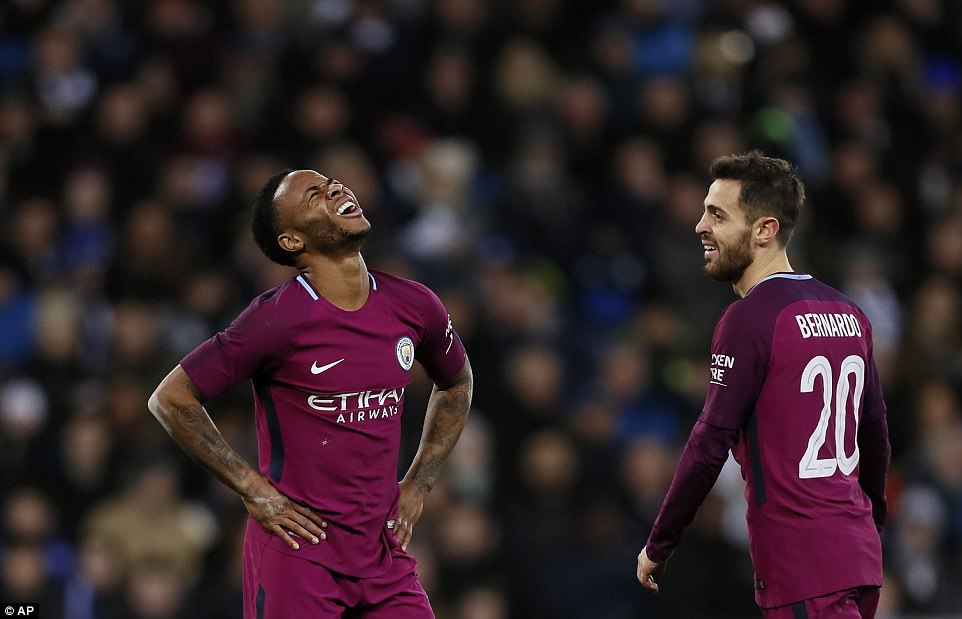 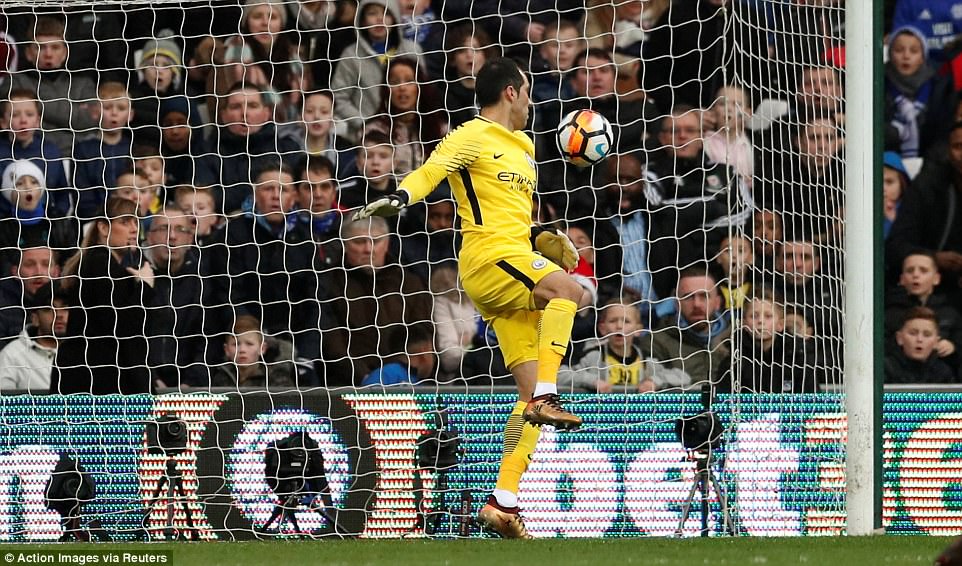 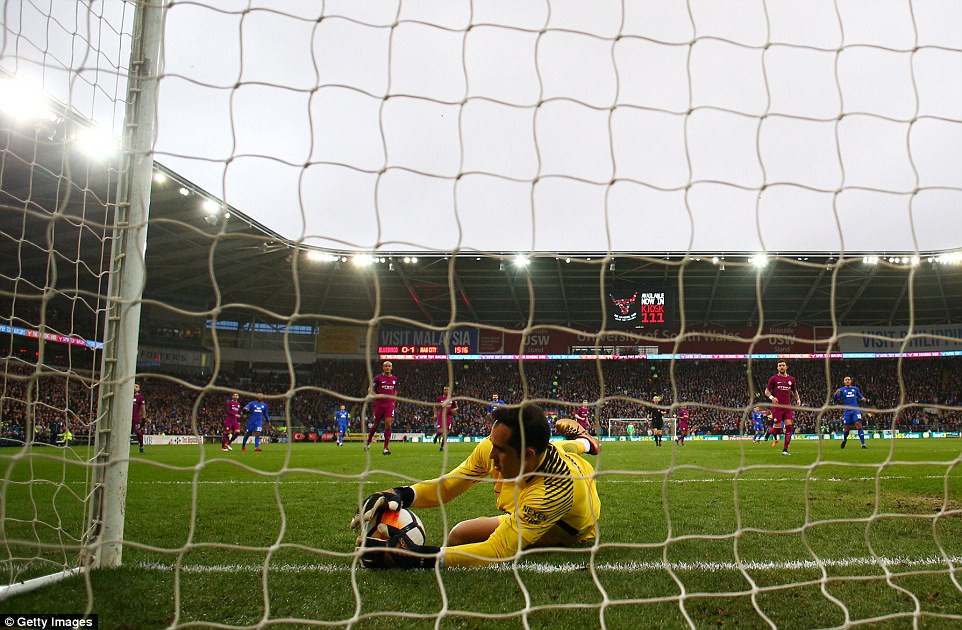 Offside had been given, against Sane, who had run in to snaffle the rebound – not that there was much chance of a save. It is rare, these days, to see offside given against a player not in possession of the ball, so it would help if it actually was offside. Replays showed Sane was level. VAR to the rescue then? Sadly no. The Football Association is operating the VAR in its cup competition this year like a random truth generator.

How much truth you get rather depends where you are. Cardiff City Stadium is one of those grounds that can’t handle the truth, it would seem – despite playing host to European finals – so Lee Mason did not get the opportunity to give Silva his due. On the touchline, Guardiola was so disgusted he unwound his black scarf and hurled it to the floor, possibly the campest show of dissent in cup history. Mason spoke to him. Maybe recommended a dry cleaners. Anyway, life moved on.

Maybe Guardiola was unhappy for other reasons, though. His team were taking a kicking out there, too. As well as the foul on Gundogan, Sean Morrison had taken out Danilo – and worse was to come. Just before half-time, a Cardiff attack broke down, allowing City to break at ferocious pace. Sane picked up the ball and ran with it, accelerating away from despairing blue shirts and now approaching the penalty area. 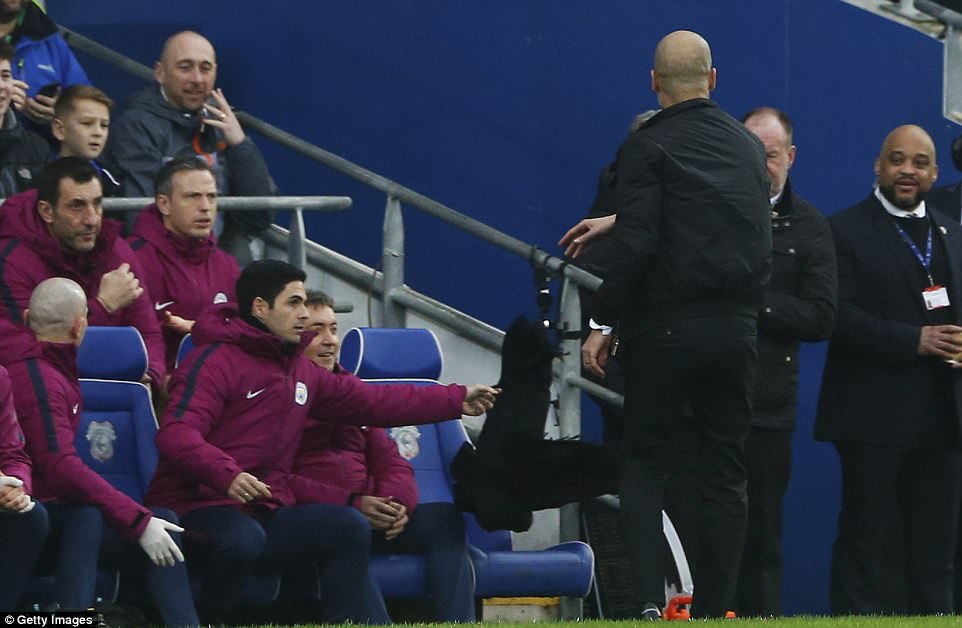 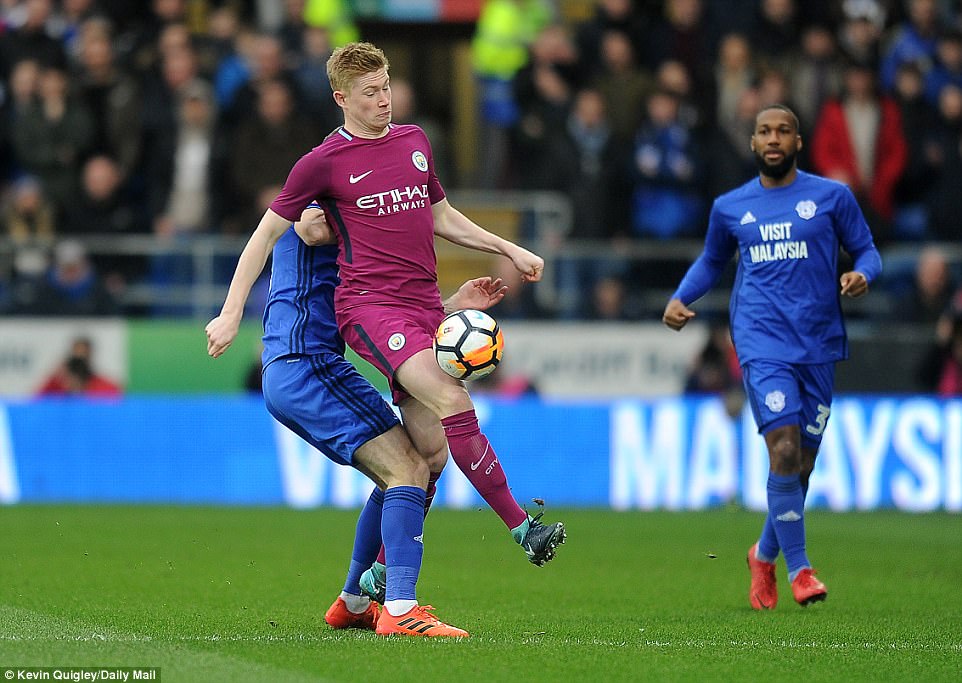 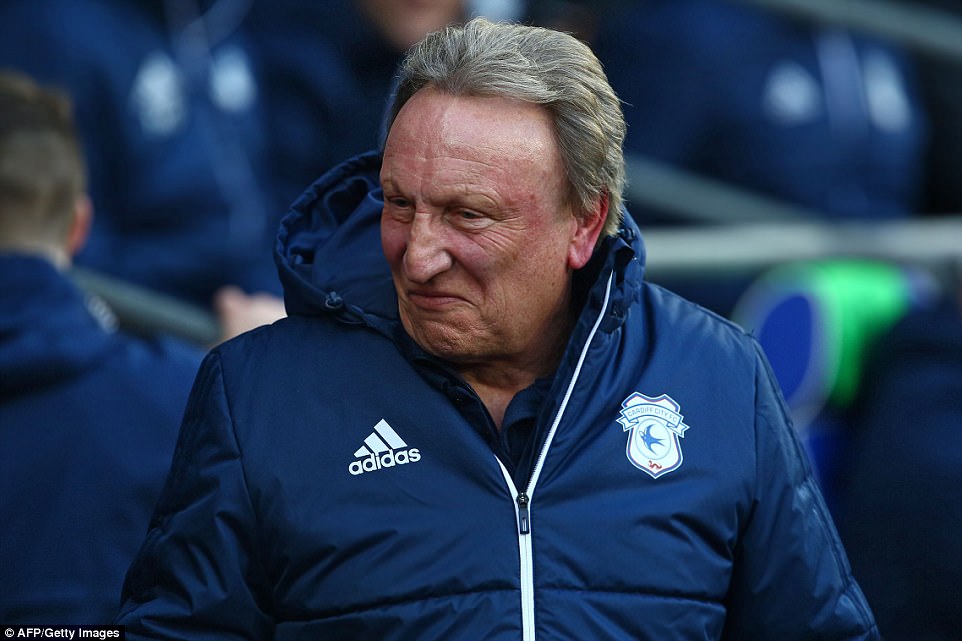 In came Joe Bennett for one of the most inevitable fouls of the season. In real time, it looked like a cynical trip. With every replay, it looked worse. Bottom line, he was lucky to stay on. Mason gave a lenient yellow. Would VAR have solved that one, too? We must hope so, if it is to serve its full purpose, particularly as Sane did not appear for the second-half.

The official Twitter feed of the German national team was equally unimpressed. ‘Hey Cardiff,’ it posted, ‘we have an important tournament coming up in the summer. Please don’t hurt our players.’ The Argentinians were perhaps not watching, or not as proactive, although Bruno Ecuele Manga’s challenge on Sergio Aguero in the 76th minute would have produced more than a few Latin screams.  Eventually, a tipping point was reached. Bennett lunged in on substitute Brahim Diaz in injury time, and was rightfully dismissed. Not a moment too soon, although it didn’t prevent Guardiola angrily confronting Mason again at the end.

Not all of Cardiff’s defensive moves were agricultural, however. In the 53rd minute, another break saw Sterling away, rounding goalkeeper Etheridge as he hurtled from his line, before Morrison intervened with a brilliant, perfectly timed tackle.

Warnock’s team were spirited going forward in the second-half, too, and with Claudio Bravo in goal there is always a chance of a grandstand finish. He didn’t have much to do, but what he did was unconvincing, particularly a routine save from a Junior Hoilett shot after 16 minutes that he almost dropped over his line. Not that it mattered. Guardiola’s master classes are even Bravo proof, it would seem. 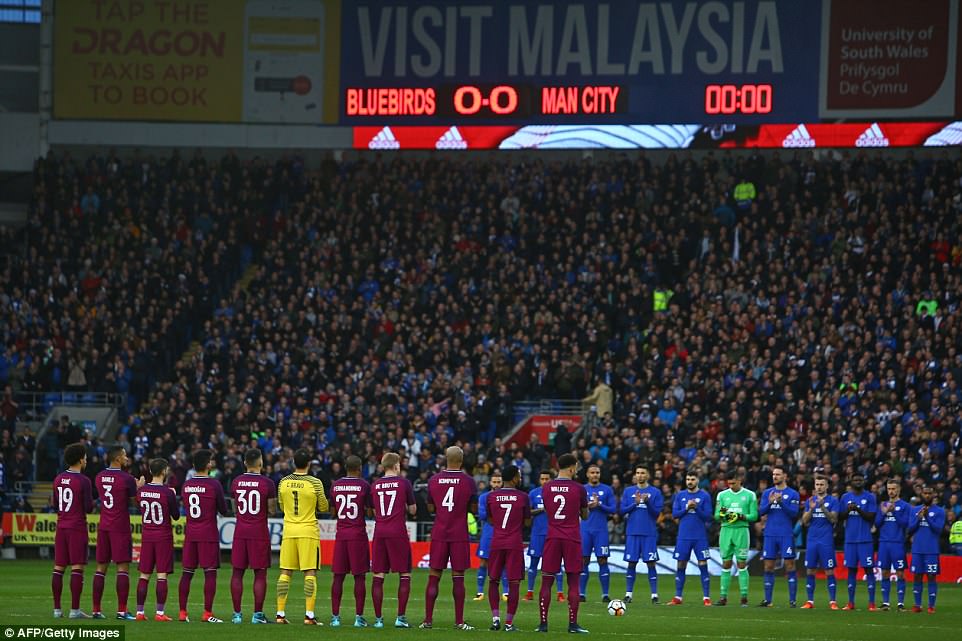