Cardiff 3-1 Ipswich: Bluebirds up to second

Omar Bogle might have had to wait three months for his full Cardiff debut but he clearly plans on hanging on to his place.

Bluebirds boss Neil Warnock spent £700,000 to bring the striker from Wigan in the summer only to make him third choice as his team started the campaign so well.

But when injuries meant he finally got a game, the 24-year-old seized his chance scoring one of the goals that kept Cardiff pushing for promotion.

The powerful striker, whose career began outside the Football League with first Solihull Moors then Grimsby, produced as cool a finish as you could ask for after running on to a pass from Nathaniel Mendez-Laing.

And he was so close to adding a couple more, twice forcing Ipswich keeper Bartosz Bialkowski to come up with big saves.

Bogle’s goal came barely 40 seconds after half time, and helped Cardiff build on the lead given them by a spectacular Junior Hoilett volley after only 12 minutes. 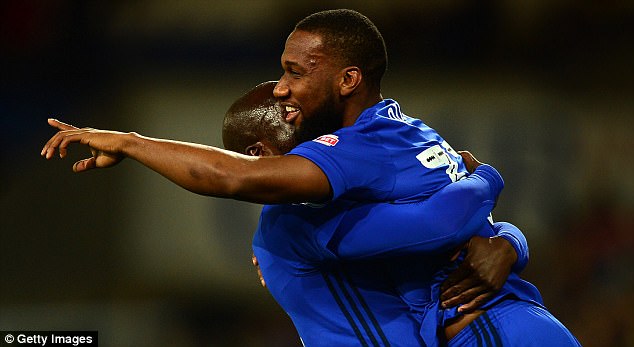 That was also set up by Mendez-Laing, although there was plenty to do when his cross reached the Canadian international on the edge of the box.

But Hoilett watched the ball carefully as it looped out of the sky, firing a low shot which skidded into the far corner and might even have touched Bogle on its way into the net.

Warnock brought 10 players into the club in the summer spending £5m on fees in the process – including buying Bogle – but arguably his best bit of business holding on to Hoilett.

He had all sorts of offers in front of him after reviving his confidence during a short-term contract with Cardiff last season.

But the Canadian winger, having had new life breathed into his career by Warnock, turned them all down and signed a one-year deal after being convinced that the Bluebirds were going to have a genuine go at winning promotion.

It’s a decision that has worked for perfectly for player and club so far as the 27-year-old has been a key figure in Cardiff’s promising start to the campaign.

And last night he gave a reminder of the talent that once had him marked out as a potential Premier League star and not only for his goal.

A few minutes later Hoilett was the danger man again, this time swapping wings before firing in a low cross that Bogle diverted goalwards, only for it to hit Bialkowski and bounce to safety. 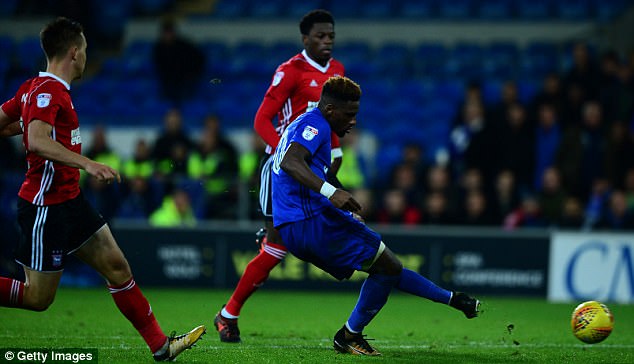 Mick McCarthy’s side rallied well from the early goal, and had a couple of chances to equalise with defender Tommy Smith missing the best of them with an air shot when he was only a few yards out following a corner.

And they also forced Neil Etheridge into a superb save at the feet of Flynn Downes after a brilliant run by Bersant Celina.

And the Ipswich boss must have fancied his chances of getting level during his half time team talk, but whatever he said was undone within 40 seconds of the restart.

Mendez-Laing broke forward on the right and kept calm to pick out Bogle with a perfect pass which gave the former Wigan striker time to bury a left foot shot beyond Bialkowski’s reach.

Warnock showed all the experience of a 68-year-old who already has seven promotions on his CV as he encouraged his side to sit on that lead. 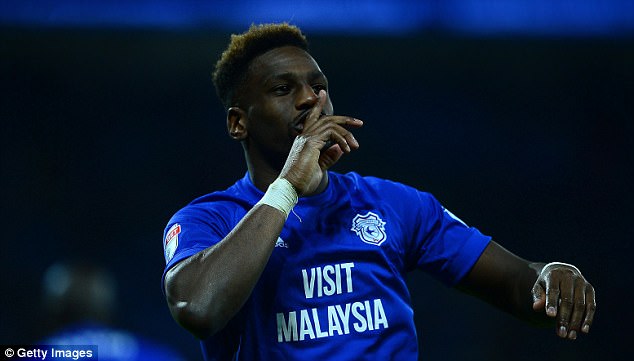 But they might have added another when with a few minutes left substitute Danny Ward broke free and steered a shot beyond the onrushing Bialkowski but it hit the outside of the post.

Instead they got a scare as Manchester City loanee Bersant Celina placed a low shot beyond Etheridge’s reach after efforts by first Martyn Waghorn then Freddie Sears had been blocked.

Any thoughts of an Ipswich revival were swiftly snuffed out, though. Mendez-Laing completed a hat-trick of assists as his shot following a breakaway was blocked into the path of substitute Danny Ward who slotted it back home.