Cardiff father transforms hole in his garden into pool

A father-of-three built a 42 sq ft swimming pool and sauna in his back garden after getting drunk and digging a hole in his lawn at 3am with friends ‘for a laugh’.

Andrew Ellery, 59, from Cardiff, had been drinking with friends at his home when they decided to dig a giant hole, to his wife Stella’s horror the next morning.

Rather than filling in the eyesore, he carried on with his mission after realising that the night time’s antics could have been his subconscious desire for a pool. 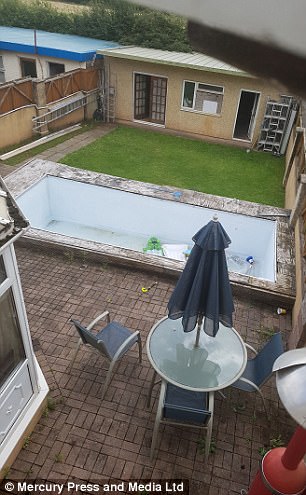 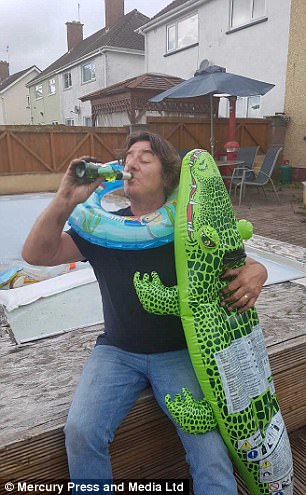 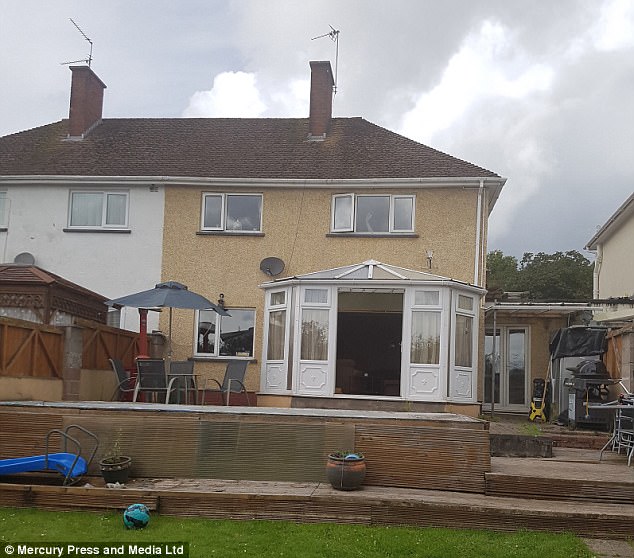 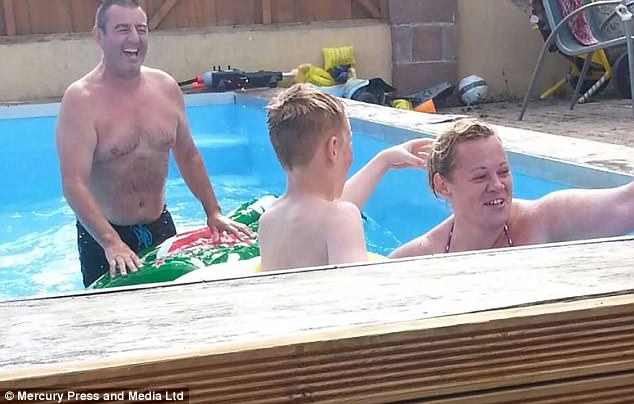 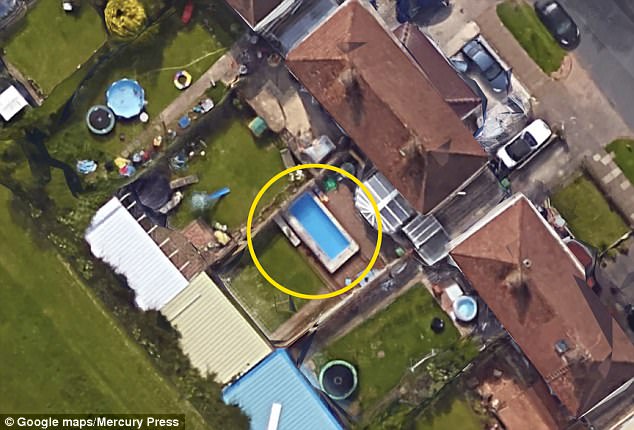 Within a week, he had a 10ft-deep pool in his garden at a snip for just £300 and even added a sauna to the setup, all of which used tiles and wood found in skips.

Now the family have become ‘local celebrities’ and people have been coming to see the pool at their former council house, as it sits alongside his 156 sq ft conservatory.

Mr Ellery said: ‘Me and my mates had a drunken night and we dug a hole around the back of my house. We were only supposed to be having a few beers. 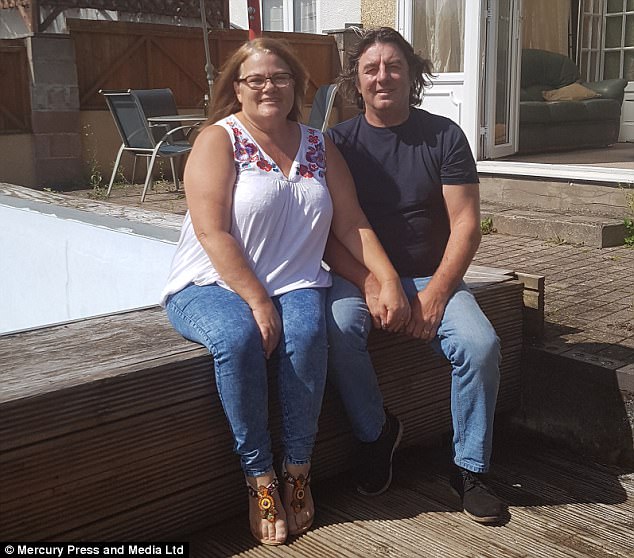 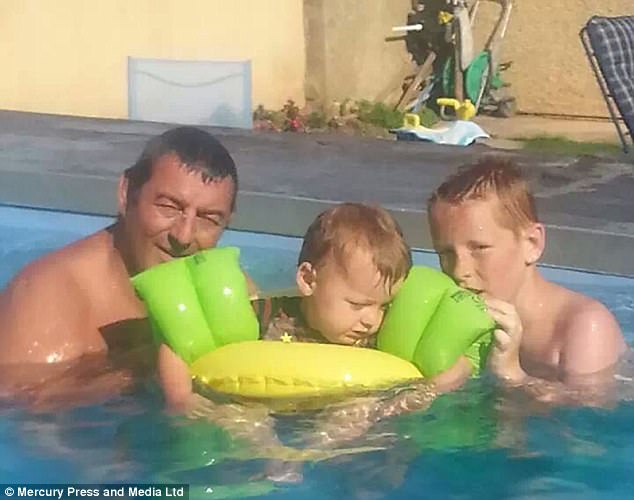 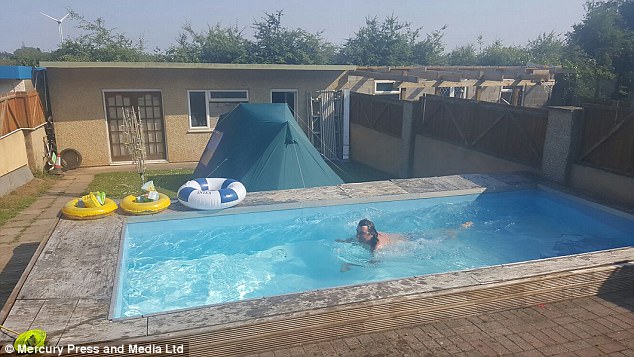 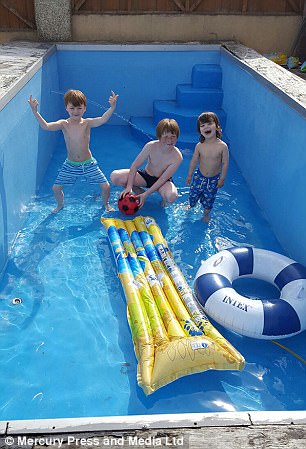 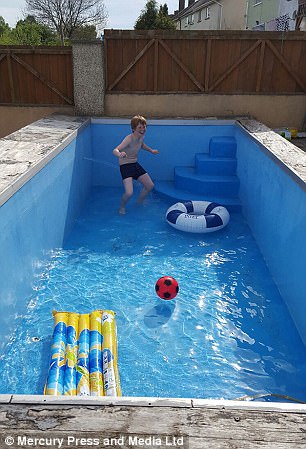 Mr Ellery’s grandsons (from left) Evan, Jacob and Rhys – and Jacob again (right) – in the pool 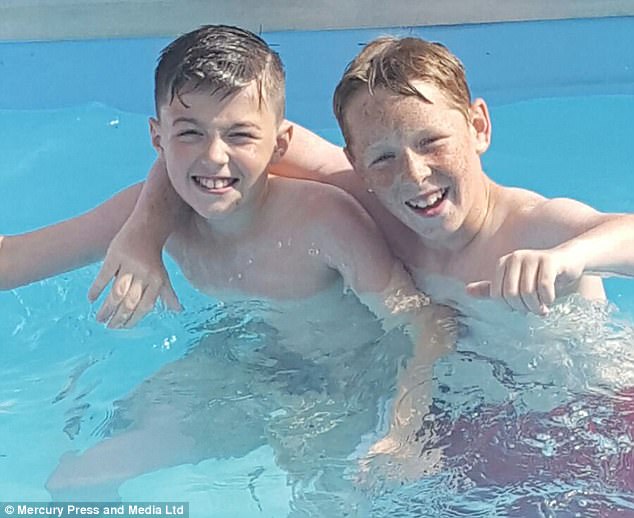 Mr Ellery’s grandsons Izac and Jacob in the pool, which has made the family ‘local celebrities’ 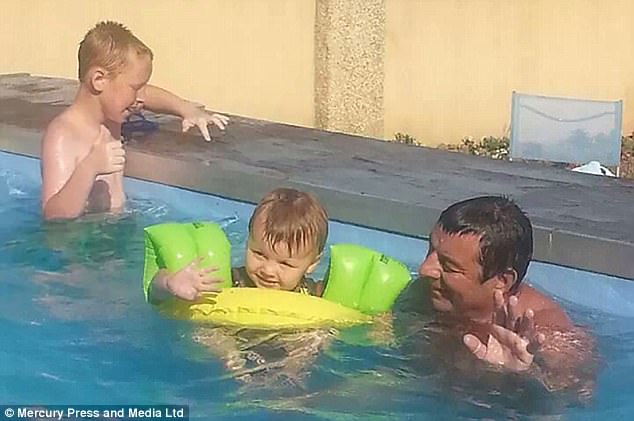 Evan (left), Rhys (centre) and father-of-three Mr Ellery enjoy the use of the pool in Cardiff

‘So I had to use some old blocks to build the pool. My wife Stella loves it now, however when she first saw the huge hole in the garden she wasn’t too pleased.

‘She came downstairs and said “what have you done?” At first, she just shouted at me to get rid of all the muck, but then she realised what I was doing.

‘I’d always wanted a pool and it had obviously been in the back of my mind that night. I’d wanted one for a long time.’

Working quickly to finish the job and avoid annoying his wife any further, Mr Ellery managed to finish this extreme DIY within a week without any help. 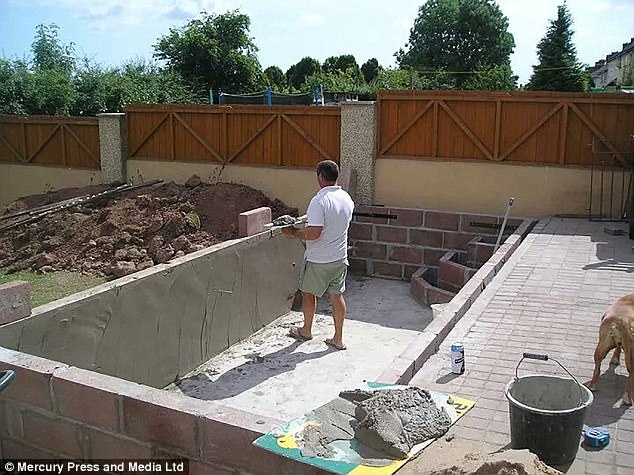 Aiming to get everything cheaply, he used off-cuts from work and recycled tiles from skips 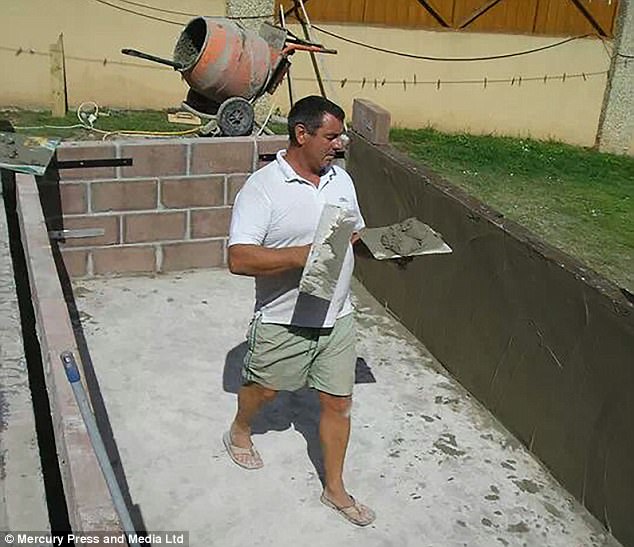 Rather than filling in the hole, Mr Ellery carried on with his mission of building a swimming pool 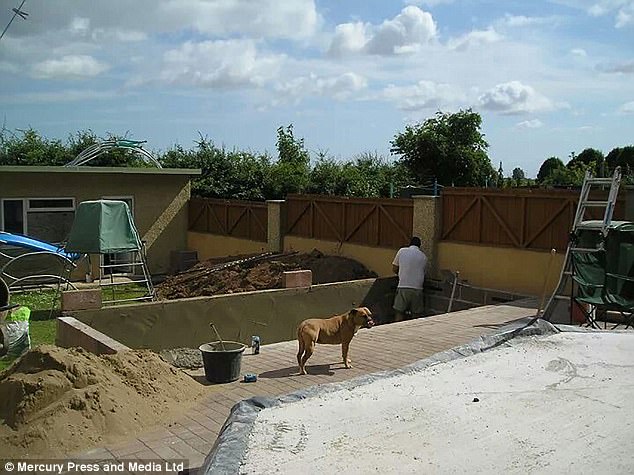 Within a week of working, Mr Ellery had a 10ft deep pool in his garden at a snip for just £300 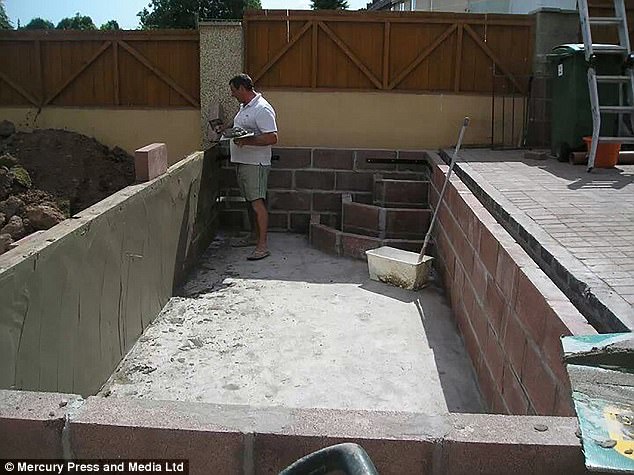 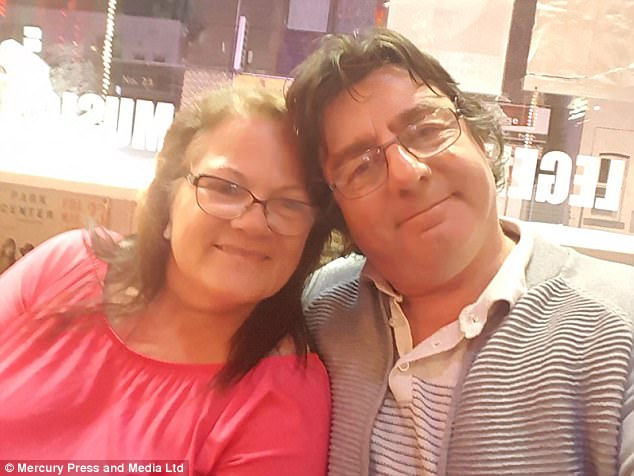 Mr Ellery, pictured with his wife Stella, who was shocked to find the hole he dug in the garden

Aiming to get everything as cheap as possible, he relied on off-cuts from work and recycled tiles from skips.

Mr Ellery said: ‘I worked on the pool after work mostly and it took me about a week to complete on my own. It’s about 10ft deep, 7ft long and 6ft wide.

‘But I’m actually planning on extending it. In the next year l’ll put in heaters and filters. It’s a pain to clean though – I guess it’s just one of those things.

‘In total, the pool has cost about £300 from start to finish. The cement was the priciest part of it. I tried to get everything as cheap as possible.

‘That’s part of the fun of it. It may only be small – it takes my seven strokes to do a length – but it’s okay to keep fit if you just keep kicking your legs.’ 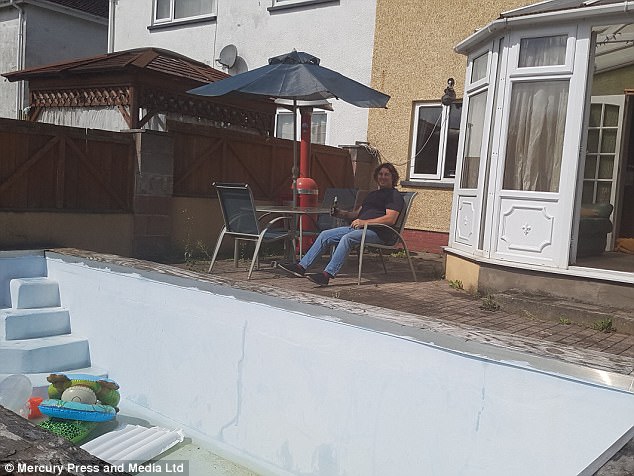 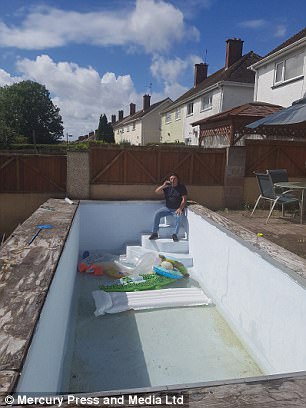 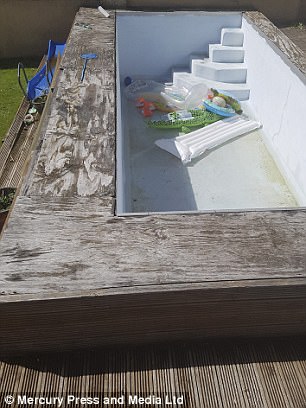 The pool is about 10ft deep, 7ft long and 6ft wide – but he is actually planning on extending it 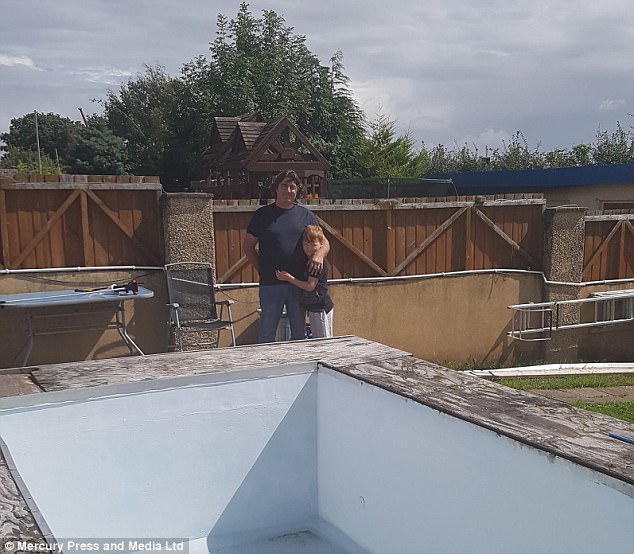 Mr Ellery, pictured with Evan, said some of his grandchildren learned to swim in the pool

As autumn approaches, Mr Ellery claims he won’t be covering over the pool for the winter and admits he enjoys diving in there after going in his sauna.

The pool, built in 2015, has attracted a lot of attention on the former council estate – and he loves to share it with his friends and family.

Mr Ellery said: ‘There’s only three of us at the house so it’s just big enough.. The grandkids love playing in it too. I’m always in the pool and so is my son.

‘I have five grandkids and they’re in it all the time. The younger ones actually learned to swim in there – they’re 11, seven and five and the others are 14 and four.

‘I go in it quite a lot after work. I love going in the sauna then jumping straight into the pool to cool off. I don’t mind the cold – I’ve worked outside all my life. 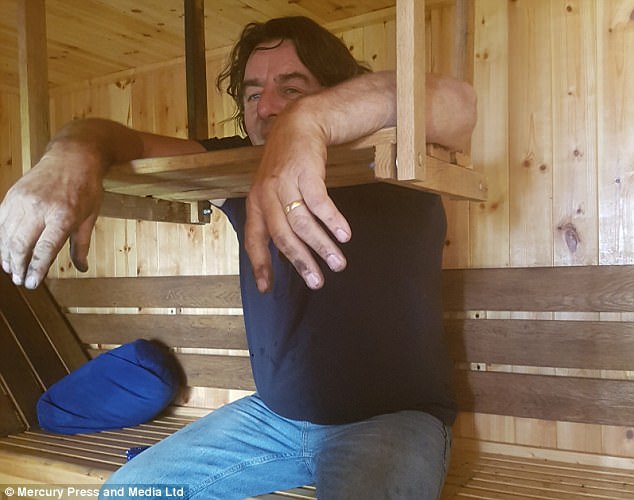 Mr Ellery even added a sauna to the setup, all of which used tiles and wood found in skips 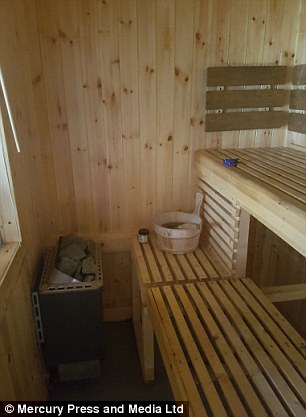 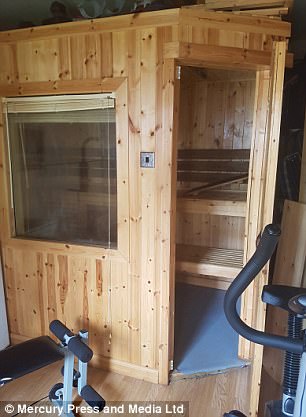 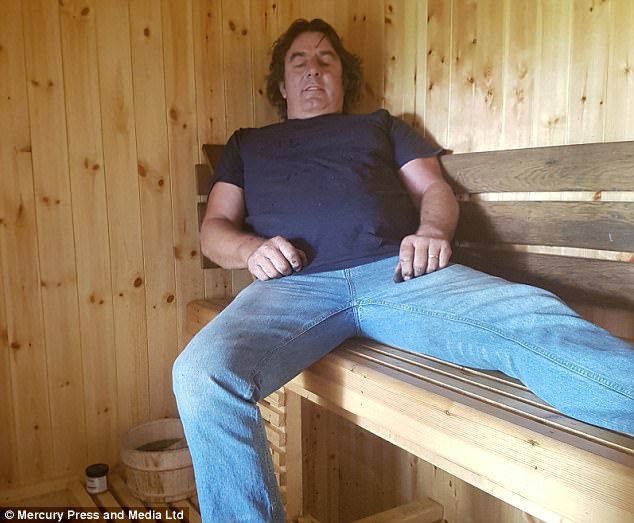 ‘When you come from the sauna and jump straight in the cold water, that’s when you reap the benefit from it. It’ll fit four people comfortably.

‘That’s my pride and joy. I used wood from skips and if I saw something I could use, I’d knock on the doors and ask if I could take it.

‘Our house itself isn’t big – we have three bedrooms – and it’s a former council house, but we have become quite famous on the street.

‘Neighbours and our grandkids’ friends always knock on the door wanting to have a look.’