Cardinal George Pell’s enemies quietly accused him of having a child with a secret lover while living in his hometown in country Victoria during the 1970s.

Daily Mail Australia can reveal Cardinal Pell’s enemies have long claimed he had a secret love child with a church employee while living in Ballarat as a young priest between 1973 and 1983.

In 2014, three years before Australia’s most senior Catholic was charged with child abuse offences, reporters had been briefed by some of those enemies in the hope of bringing the Cardinal down. 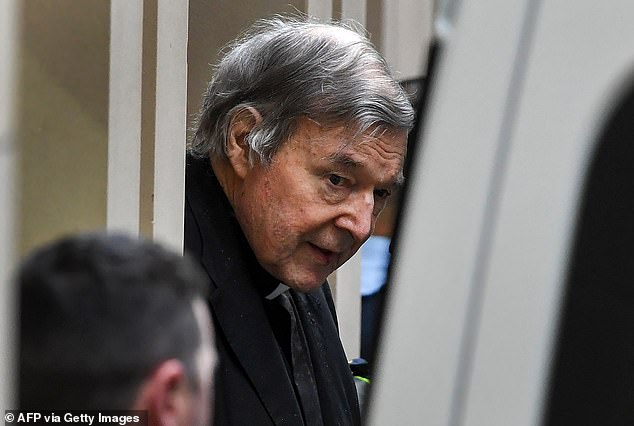 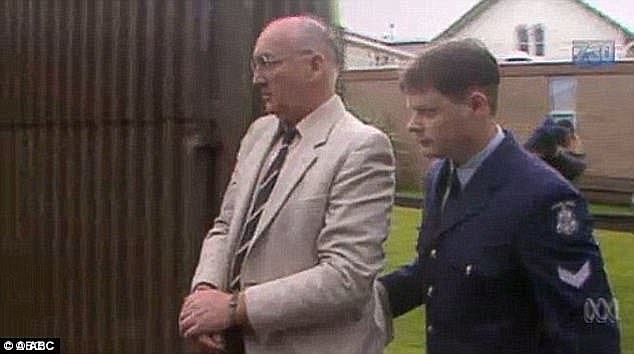 One of Australia’s top reporters at the time had searched the land looking for Cardinal Pell’s ‘illicit lover’, but she could not be found.

He had been convicted in 2018 – and later cleared – of performing sex acts on choirboys in Saint Patrick’s Cathedral in Melbourne in 1996.

When Cardinal Pell was charged of the crimes in 2017, he was effectively running the Vatican’s finances, and was the most senior figure in the church to ever be charged with sex crimes against children.

Word of Cardinal Pell’s supposed relationship with the employee was passed onto the reporter, who asked not to be named, after he observed an intriguing omission by a Crown prosecutor’s opening summary in the 2014 case against notorious paedophile priest Gerald Ridsdale.

During that hearing, the court heard a clergyman had witnessed Ridsdale raping a young girl 40 years earlier.

Cardinal Pell had shared a home with Ridsdale in the 1970s, accompanied him to court in 1993 and later offered to provide character evidence for him.

‘It was really the first time Pell had been linked to any direct action and opened the doors to what really descended into a witch hunt,’ the reporter told Daily Mail Australia after the cardinal’s death. 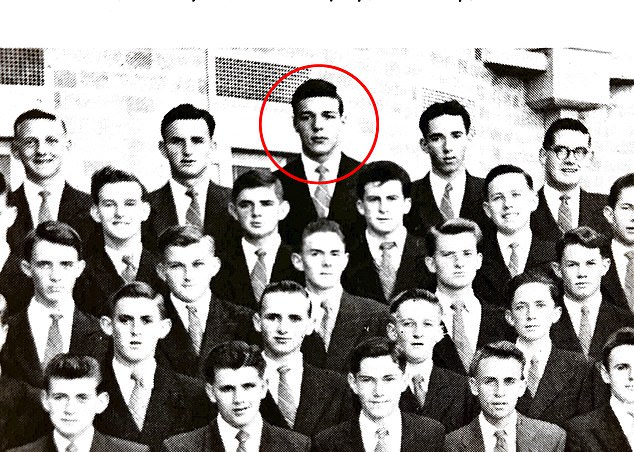 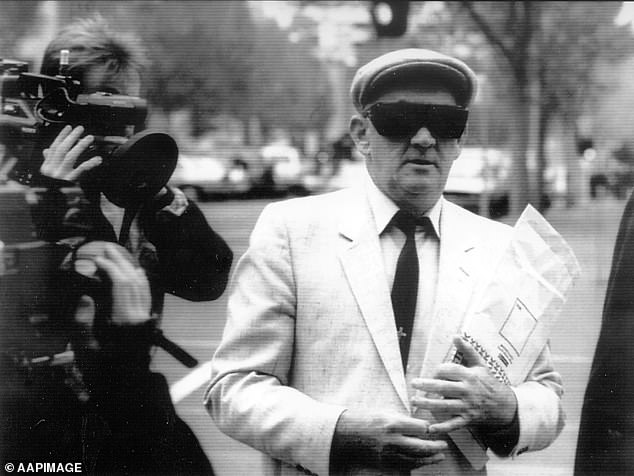 Catholic priest Gerald Ridsdale, who was jailed on paedophile charges in 1994. He had shared a home with George Pell 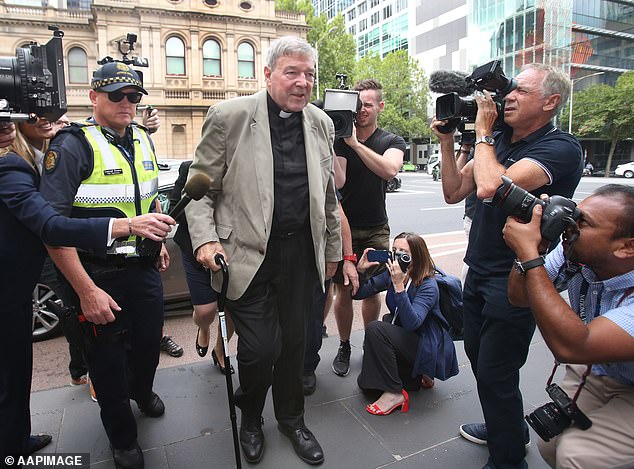 In sentencing one of Australia’s most notorious pedophile priests to eight years in jail, Judge Michael Rozenes said: ‘Although it does not directly involve you, Mr Ridsdale, there is a further disturbing aspect to this incident, namely that this complainant believes another priest was present for a short time while you were sexually assaulting her and must have been aware of the assault but did not intervene.

‘I raise this merely to make an observation: namely that this behaviour appears to be demonstrative of the church’s approach to sexual abuse at the time which ultimately — and unfortunately, for your victims — allowed your criminal behaviour to go unchecked for so long.’

That priest was Cardinal George Pell.

The 2014 Ridsdale summary stated: ‘(She) believes that another priest living at the house at the time walked through the door to the hallway and exited out the back door as this occurred.

‘She knows that this priest saw what was happening.’

But it was a conversation the prosecutor had with then chief judge of the County Court of Victoria, Judge Michael Rozenes, in open court that piqued the reporter’s interest.

The pair had agreed to skip reading aloud a paragraph naming the priest who allegedly witnessed the rape.

When questioned by the reporter, police and prosecutors went to ground.

When the reporter tracked down Ridsdale’s victim at her home, she declined to name the priest, saying: ‘I’ve done everything I possibly can, I have to live with this, I’ve got a family to look after.’

The Catholic Church was forced to reject the allegation when it was put to it by the reporter that afternoon.

‘It is certainly mistaken to assert that he (Pell) witnessed any such crime and failed to act,’ the church insisted at the time.

Cardinal Pell said he ‘never saw any such thing at any time, and no such crime was ever reported’ to him.

If he had witnessed the crime, or if it had been reported to him, he ‘would have acted immediately to report it to the police’, the church insisted.

The story made front page news across Melbourne, but detectives were far from happy about the report. 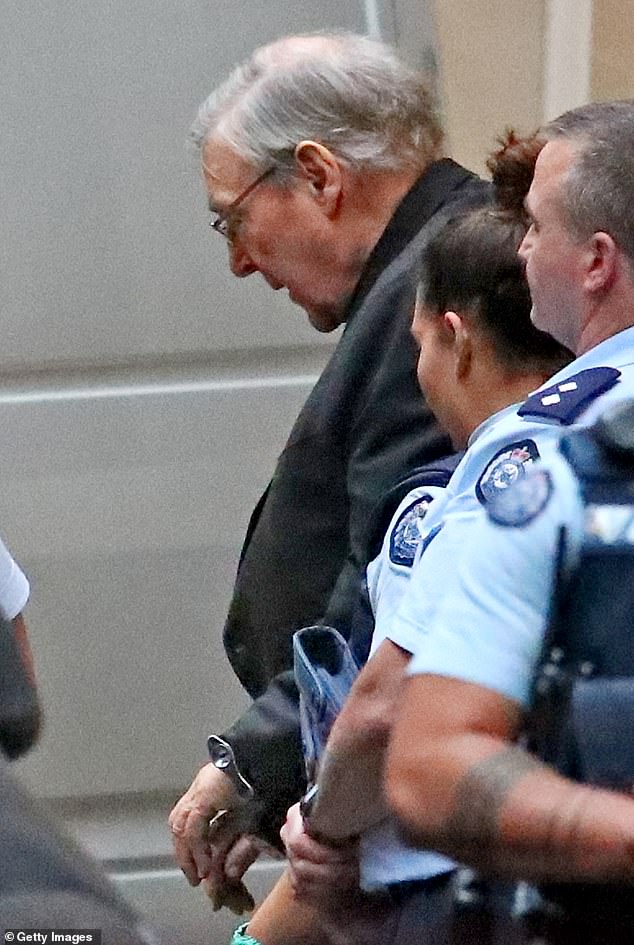 Cuffed and humiliated: George Pell was eventually released from from jail after a High Court decision 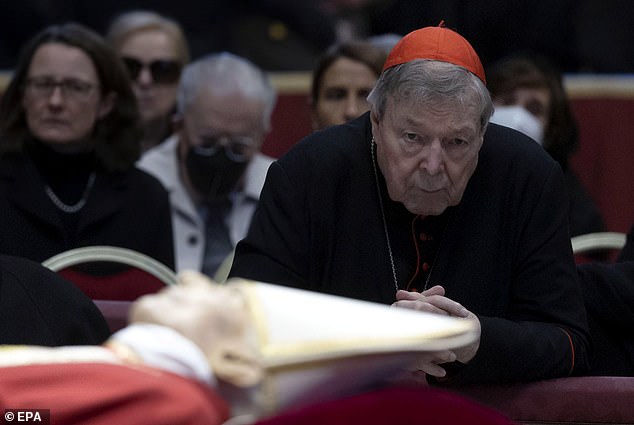 Officers from Victoria Police’s SANO taskforce — which was investigating institutional sexual abuse at the time — refused to confirm or deny the priest’s identity.

Speaking to Daily Mail Australia, the reporter claimed cops told him to ‘leave (the story) alone’.

By 2015, detectives had changed their tune and were secretly briefing reporters about their investigation into the Cardinal.

A front page article in May that year named Cardinal Pell as the mystery priest left unnamed during the Ridsdale hearing.

Under mounting pressure from the Cardinal’s now long list of enemies, detectives charged him in June 2017.

He would not walk free from prison until June 2020 after being cleared on appeal to the High Court of Australia.

The timing of the alleged assaults was impossible.

It was not possible for Cardinal Pell to be alone in the sacristies only a few minutes after the end of Mass.

It was not possible for him to be robed and alone in the priests’ sacristy after Mass.

It was not possible for two choir boys to be sexually assaulted in the priests’ sacristy after Mass by him undetected.

It was not possible for two robed sopranos to leave an external procession without being noticed.

The criminal acts attributed to Cardinal Pell were physically impossible.

County Court Chief Judge Peter Kidd erred in not allowing Cardinal Pell’s defence to present a video in his closing arguments, and that there was a ‘fundamental irregularity’ in how Pell was arraigned at trial.

The decision overturned an earlier ruling by the chief justice of the Supreme Court of Victoria, Justice Anne Ferguson, president of the Court of Appeal Justice Chris Maxwell, and Justice Mark Weinberg.

In a summary of the decision handed down by the High Court, it stated the Supreme Court judges’ analysis at his original appeal ‘failed to engage with the question of whether there remained a reasonable possibility that the offending had not taken place, such that there ought to have been a reasonable doubt as to the applicant’s guilt’.

At his time of death, Cardinal Pell was set to front court yet again in a civil case brought on by one of his alleged victims.

The case was brought on by the father of one of the choirboys Cardinal Pell had been accused of molesting in 1996.

The man’s son died aged 31 from a drug overdose in 2014 before the Cardinal was charged.

On Wednesday, the law firm representing the father, Shine Lawyers, said it would be progressing the claim despite Cardinal Pell’s death.

The man claimed he suffered psychological harm after learning of the allegations that his son had been sexually abused.

Shine Lawyers chief legal officer Lisa Flynn said in a statement the claim would continue against the church and whatever estate Cardinal Pell had left behind.

Cardinal Pell’s body will be returned to Australia from the Vatican, with a commemorative service expected to be held at a later date.