Care worker, 26, had sexual relationship with a vulnerable 16-year-old

Care worker, 26, who had a sexual relationship with a vulnerable 16-year-old she met at a residential centre for troubled teens is spared prison

A care worker who had a sexual relationship with a vulnerable 16-year-old boy after exchanging explicit messages with him has avoided jail.

Kayleigh Martin, 26, of Hamilton, Lanarkshire, carried out sex acts with the boy after being handed his case at a residential centre which supports troubled teenagers and young adults.

Bosses called in police when her relationship with the boy, who cannot be named for legal reasons, came to light – and she was arrested last July.

Martin denied all wrongdoing at Lanark Sheriff Court, but she was convicted of engaging in sexual activity with the teenager while in a position of trust and sending a sexual communication.

She was told to carry out 250 hours of unpaid work and given a two-year supervision order by Sheriff Nikola Stewart who criticised her ‘appalling behaviour’ and said she was ‘foolish’.

Martin, who now works in retail, had been a registered residential child care worker with the Scottish Social Services Council, which is based in Dundee.

But she was placed on the sex offenders’ register for two years and banned from contacting the boy.

Her lawyer said her career in social services was over for good. Sheriff Stewart said: ‘This was a serious relationship regardless of what she thought it was.

‘He is a young man who has an attractive, caring young woman who was giving him a highly unusual amount of attention and the warning bells should have been ringing much earlier. I don’t think she is predatory but is someone who is naive and foolish. 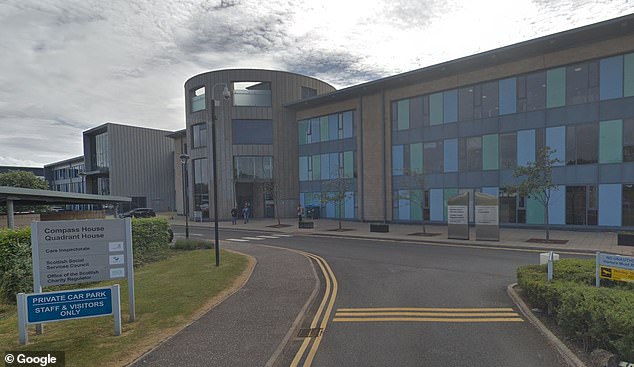 Martin had been a registered residential child care worker with the Scottish Social Services Council, which is based in this building in Dundee

‘I have no doubt that this will have undoubted serious repercussions on his life and frankly this is a dreadful thing she has done. The benefit of her education has now been entirely wasted.

‘I regard this appalling behaviour very seriously and can’t say enough how worried I am about the repercussions of this on this young man’s life.’

Archie Hill, defending, said: ‘There is simply no prospect of her going into that field of work ever again.

‘The lady respects the finding of the court but maintains her position and I would have been shocked if she had changed that because she is vehement in her denial of this offence.

‘But the galling thing about this case is that she has simply put her head in the sand and this has been a horrific experience for her.

‘She only had some experience of the job and there were some texts that were inappropriate but she was an inexperienced worker in that environment.

‘He was used to the system but she simply wasn’t, it was unusual how much contact she was having with this young man.

‘She always wanted to work in that field but that will not happen and this case will impact her life in every way imaginable.’

A source close to Martin said: ‘She had a very promising career ahead of her but she has absolutely ruined that for herself.

‘She should never have allowed herself to get involved in a situation like this and now she has to accept the consequences.

‘Her life has been changed completely and she is lucky she wasn’t sent to prison for a massive breach of trust from someone who should have known better.’