Career women must not infantilise their husbands warns head

Too many mothers ‘infantilise’ their husbands by leaving lists of instructions on how to run the house while they are away, a leading head teacher has warned.

Vicky Bingham, head of the girls-only South Hampstead High School, hit out at women who ‘micro-manage’ daily tasks such as ‘play dates’ and chopping vegetables.

She said often these mothers hold down very demanding jobs and could do with some extra help, but believe their household routine will fall apart if their husband takes over.

Vicky Bingham, head of the girls-only South Hampstead High School, hit out at women who ‘micro-manage’ daily tasks such as ‘play dates’ and chopping vegetables

The head, whose £18,000-a-year school is part of the Girls’ Day School Trust, said male domestic ineptitude was a myth and women should learn to trust their other halves more.

She warned failing to do so could make their daughters believe they have soul responsibility for household chores when they grow up.

Mrs Bingham said: ‘I have known friends leave instructions for their husbands on “Looking after the Children” when they have been away on business.

‘I have listened to them lament apparently having to micro-manage decisions about coats, socks, carrot batons, baths and homework, on top of very demanding jobs.

‘Even if fathers are shouldering their fair share of chores, it seems that many women of my generation still carry the mental load, and believe that if they didn’t the household would fall apart.’ 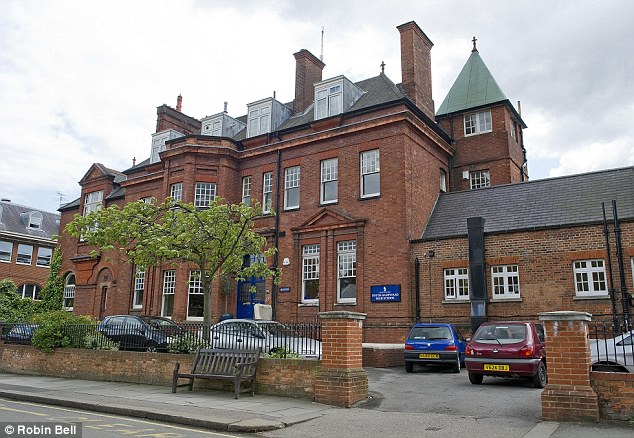 She said often these mothers hold down very demanding jobs and could do with some extra help, but believe their household routine will fall apart if their husband takes over (pictured: South Hampstead High School)

She warned that ‘extreme multi-tasking’ had become a point of feminine pride, and ‘busyness’ was a badge of ‘professional and maternal honour’.

She added: ‘What kind of blueprint are some of us providing for our daughters by infantilising men?’

The head, who is married with a nine-year-old daughter, said she had experienced the phenomenon even in her daily life.

Her female friends recently told her she is ‘brave’ and had her husband ‘well trained’ when they found out that he was organising their child’s birthday party despite holding down a demanding job himself.

Mrs Bingham said she did not believe that women were by nature better organisers than men, but it had become expected of them.

‘It should be a shared thing.’

The head said the expectation on women to be perfect on all fronts was putting girls under too much pressure.

Last year she scrapped report grades for ‘organisation’ because it encouraged girls to think that academic success was down to having beautifully organised notes.

She said she had hope for the future because young men were becoming more concerned with balancing life and work, and fathers of pupils at her school were as involved in their daughters’ education as their mothers were.

She added: ‘At a recent assembly to our students, I reminded girls not to bother trying to please everyone all the time. There is no value in trying to live up to perceived ideas of female perfection.

‘As I told them, you can’t be amazing at everything, or at least not all the time. You have to be happy with what you can do, and just let the rest go..’

Mrs Bingham said her belief is not an excuse for students to become sloppy, but rather they must learn when they need to ‘nail it’ and when they can cut corners.