A young carer was told she was eight months pregnant but was in fact just six weeks gone – because her ‘baby bump’ was a 30cm cyst that eventually caused her to miscarry.

Kirsty Butler, 22, and her boyfriend Celern, 21, were over the moon to discover she was expecting after taking a home test when people began commenting on her bump, which was growing quickly.

Doctors then said she was 30 weeks along after her stomach ballooned to four times its normal size.

An ultrasound revealed Kirsty, from Swansea, was pregnant – but was not that far along. Her huge bump was in fact a huge ovarian cyst ravaging her womb.

She was then only six weeks pregnant and was devastated to be told her own and her tiny unborn baby’s life hung in the balance – the massive mass was eating away at her ovary and she urgently needed lifesaving surgery. 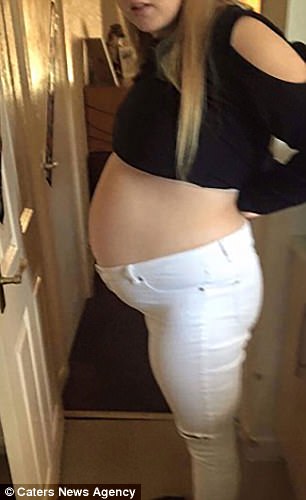 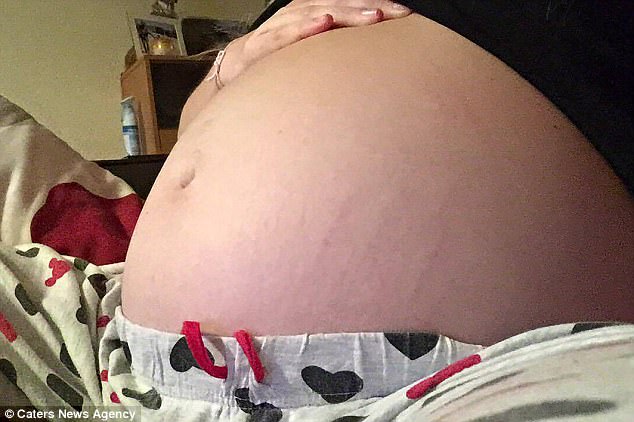 The 22-year-old and her boyfriend Celern, 21, were overjoyed to find out she was expecting 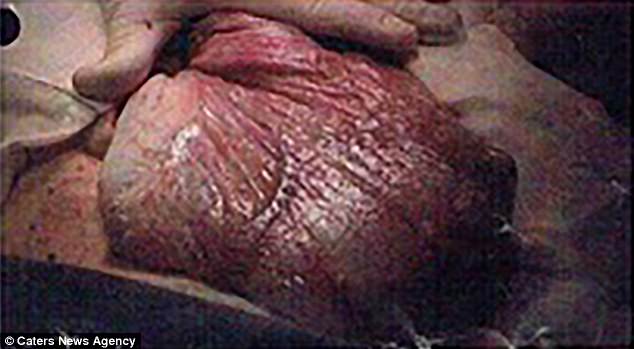 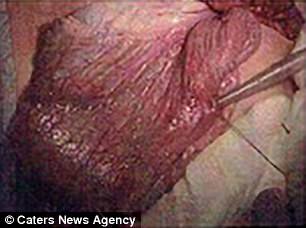 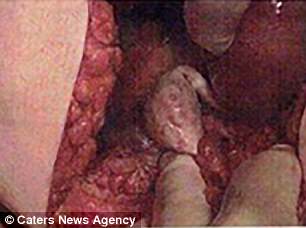 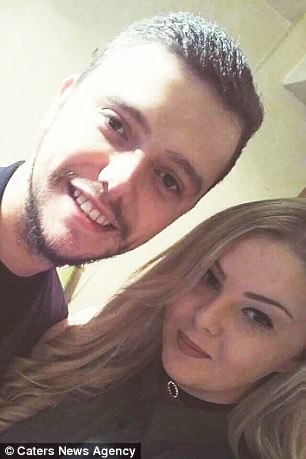 But despite doctors’ best efforts to save her baby, Kirsty had a miscarriage at 11 weeks.

‘My baby had been overcome by the huge cyst, I was heartbroken,’ she says.

‘My unborn baby was tiny’

Kirsty decided to take a test after her work colleagues started to ask her if she was pregnant.

‘I hadn’t noticed myself but when I kept getting asked, I decided to take a pregnancy test,’ she said.

‘It came back positive so me and Celern were so excited. Doctors predicted I was 30 weeks as by this point, my stomach had grown rapidly.

‘But when we were sent for a scan, our nightmare began. It wasn’t a baby in my womb, it was a 30cm by 20cm cyst that was growing every day.

‘My pregnancy bump was actually a huge mass. My unborn baby was tiny, far too small to even create a bump.’

‘There was no heartbeat’

Kirsty was told the cyst could be deadly but made the agonising decision to wait until she was 11 weeks pregnant to have the operation to remove the mass, as she was told this would be safer for the baby.

But then just before her surgery in August last year, she was told the heart-breaking news. 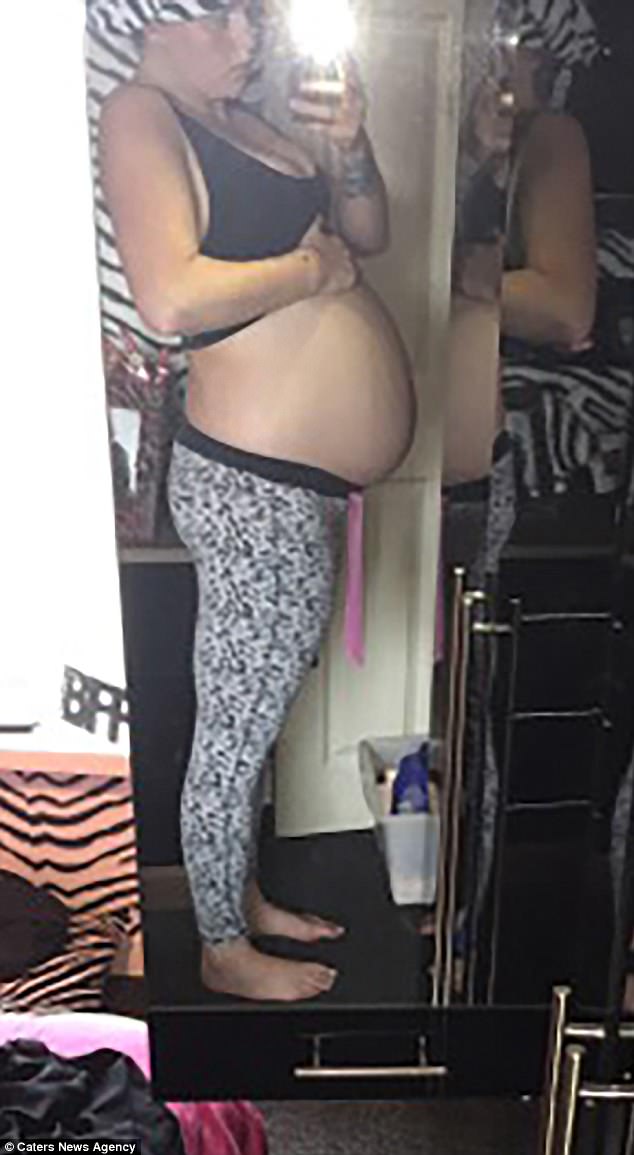 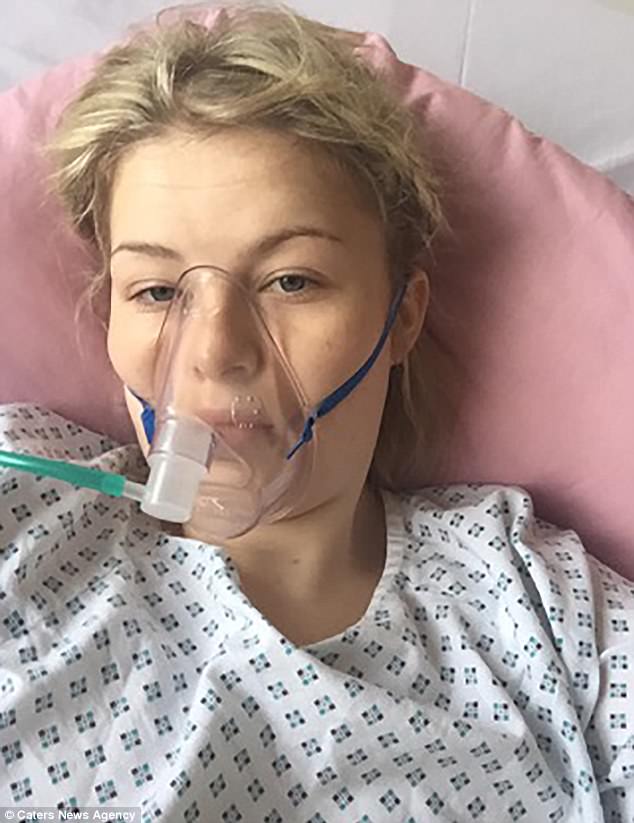 SYMPTOMS OF AN OVARIAN CYST

An ovarian cyst usually only causes symptoms if it ruptures, is very large, or blocks the blood supply to the ovaries.

In these cases, you may have:

See your GP if you have persistent symptoms of an ovarian cyst.

‘When I had a scan the week before, I was told there was no heartbeat,’ she said.

Kirsty went ahead had the operation to remove the gigantic cyst from her ovary.

After six weeks in hospital, she was finally allowed home and is now sharing her story to raise awareness of ovarian cysts.

Before her ordeal, she says she had no idea they could grow so large nor did she understand the dangers they posed.

‘I was lucky my cyst was benign but I had to have my ovary removed as it has been crushed,’ she explained.

‘If it had been left any longer it could have started to crush my organs.’

Hopes to have a family

Kirsty says that she and Celern hope to try again start a family in the near future.

‘I’ll just be extra cautious next time my stomach starts to swell,’ she says.

Kirsty has since undergone fertility tests and has been told she should be able to conceive again.

‘It was so traumatic losing my baby, then my ovary and recovering from surgery last year,’ she said. 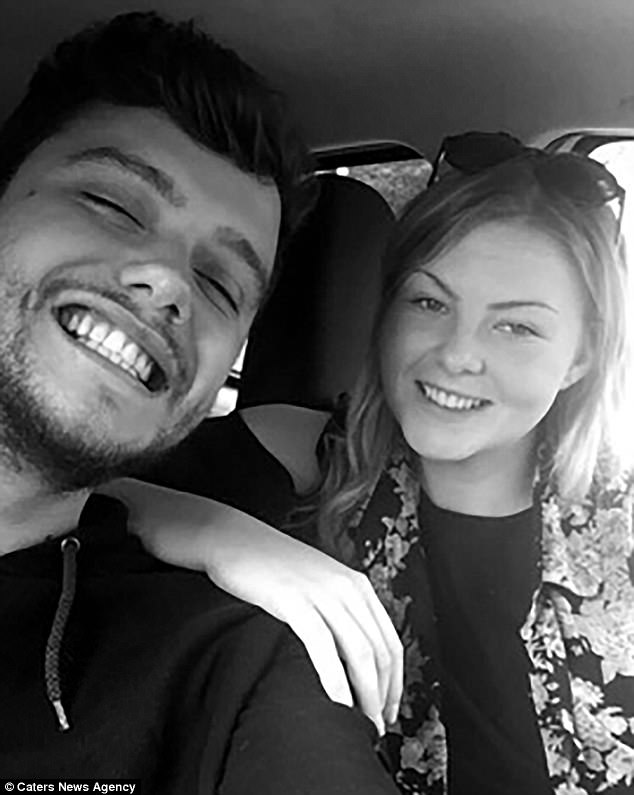 ‘Me and Celern definitely want children in the future so I decided to have my fertility checked.

‘I was over the moon that I had enough eggs in my one ovary, we were told we shouldn’t have any problems conceiving.’

Doctors gave Kirsty photos of her cyst and she was shocked by its enormous size.

She said: ‘I knew it would be huge by the size of my stomach but I never imagined it would look the way it did.

‘I hope my story raises awareness for cysts and how dangerous they can be.

‘I wasn’t taking much notice of my body but now I’m always vigilant in case it comes back.’