A Los Angeles Superior Court judge on Thursday signed off on a settlement the 44-year-old beauty – who appeared on season four of The Real Housewives of Beverly Hills – agreed to with David, who she shares three children with, according to TMZ.

David Gebbia in November of 2017 cited irreconcilable differences in his divorce filing from the one-time Bravo star, according to the outlet, which noted that the pair had separated almost a year before the filing.

Changing times: Carlton Gebbia, 44, has finalized her divorce form her businessman husband, David, more than two years after their separation. She was snapped in 2017

The couple first exchanged vows in September of 1997, later separating in August of 2016. They are parents to three kids: daughters Destiny and Mysteri, and son Cross.

Following their split, they remained living at the 75,000 sq. foot Gotchic style mansion they shared in Beverly Hills, People reported, with an insider telling the magazine they remained ‘under the same roof for the wellness of their children.’

Speaking with People last year, the stunning reality star, known for her Wiccan faith, said that the parting ‘just sort of happened naturally’ amid ‘a gradual breakup of our relationship over a period of time.’

She said ‘it was never a verbal decision between’ she and David, who she described as her ‘best friend’ and ‘soulmate for 20 years. 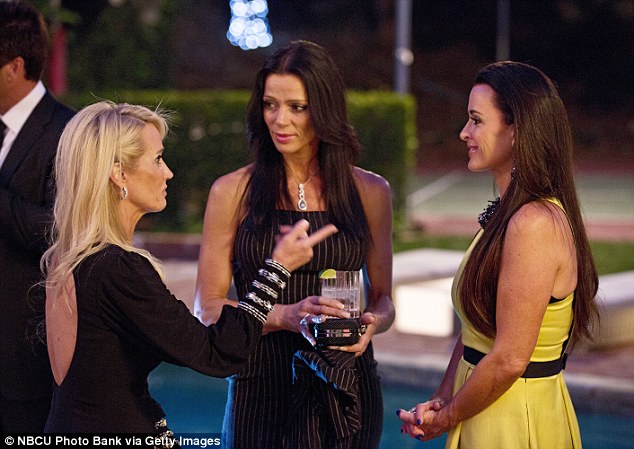 In the middle of things: Carlton was seen standing between sisters Kim and Kyle Richards in this shot from RHOBH 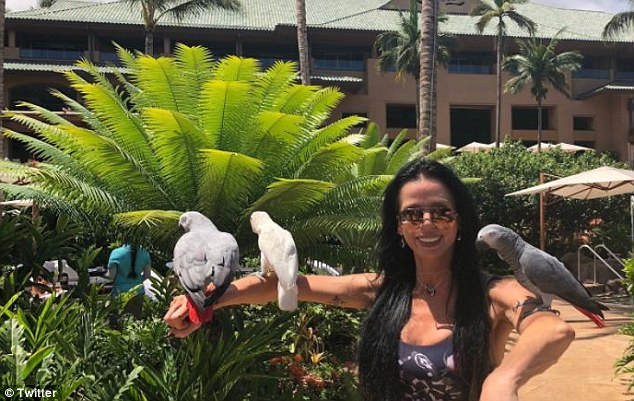 Living her best life: The gorgeous TV star used her arms as a perch during a Hawaiian vacation lats month

‘He was my everything, but we’ve been together a long time,’ she said.

Gebbia, who grew up in both England and South Africa, said that unlike some of her Real Housewives colleagues, her stint on the Bravo series was not a bad thing for their relationship.

‘I have to add, because I have heard about the Housewives curse, my experience with Bravo and the show actually made my relationship with David stronger,’ she told the magazine. ‘He has always had my back, but this was like a different animal. We had a partnership and worked really well together.’