That didn’t take long! Carlton vs Collingwood rivalry EXPLODES before a point has been scored as age-old rivals get into melee at a packed MCG

The Blues and Magpies’ highly anticipated clash lived up to the hype before a single point had been scored as a hard tackle quickly snowballed into a stoush involving a dozen players right in front of baying fans on the boundary.

Only a few minutes of the contest had elapsed on Sunday when Collingwood’s Taylor Adams hit Blues superstar Patrick Cripps with a hard tackle, threw him over the boundary and appeared to grind his fist into his opponent’s face.

Cripps gave it right back, putting Adams in a headlock and slinging him over his body so he ended up on top of the midfielder.

Players from both teams steamed in and a melee quickly formed involving roughly a dozen footballers, with the action splitting off into a separate clash that saw controversy magnet Magpie Jack Ginnivan pulled off the ground and back onto the field.

Given the sorts of minor offences free kicks and 50-metre penalties have been given for this season, it’s incredible that no whistle was blown. 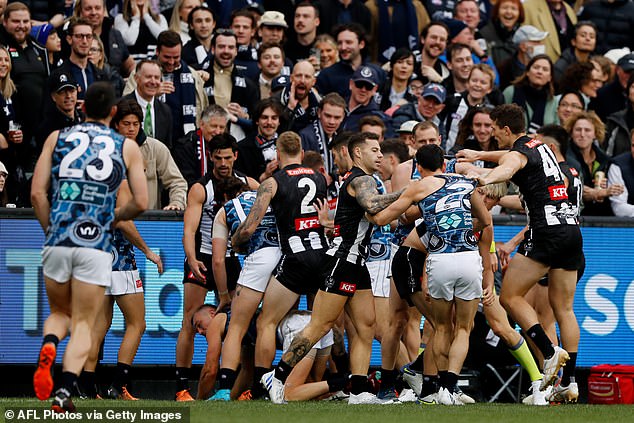 Michael Voss’s side looked to be letting the game slip away from them until they struck back midway through the second term with Cripps, Sam Walsh, Adam Cerra and Charlie Curnow kicking four unanswered goals.

It was a great effort considering Carlton suffered a huge blow when top defender Jacob Weitering suffered a shoulder injury that saw him subbed off, leading commentator Daisy Pearce to remark, ‘If there’s one player Carlton can’t afford to lose, that’s it.’ 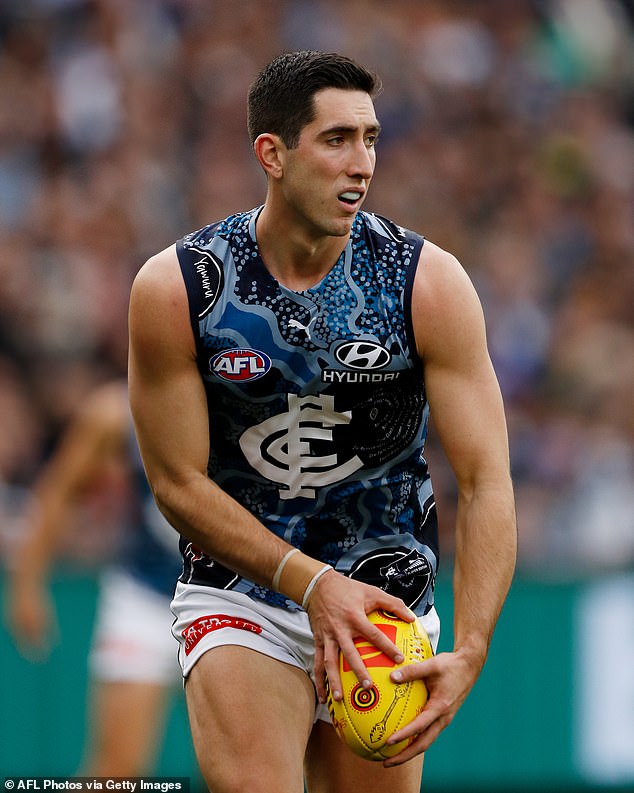 Weitering did the damage in a clash with Collingwood’s Jordan de Goey in the first quarter and started holding his shoulder straight after the impact. His arm was put in a makeshift jumper sling in a worrying sign.

Carlton revealed he had suffered an injury to his AC joint, with sideline eye Cameron Ling providing a bit of relief for worried Carlton fans when he said, ‘He’s come back out onto the ground and said, “I don’t think it’s that bad,” which might be good for the long term.’