Carol concerts face the axe this Christmas due to social distancing, say Church of England bishops

Large traditional carol services which delight millions over the Christmas period are set to be banned this year, according to an announcement prepared by Church of England bishops.

Church leaders are to warn that because of social distancing restrictions services during Advent in December and at Christmas ‘are inevitably going to look very different.’

Carol services involving large choirs and enthusiastic singing by the congregation, often together with accompaniment by bands, are by far the most popular events in the Church of England’s year.

More than 5.5million people attended them in 2018, according to the most recent figures – around eight times the number who go to CofE churches on an average Sunday.

Church leaders are to warn that because of social distancing restrictions services during Advent in December and at Christmas ‘are inevitably going to look very different.’ Pictured: King’s College choirboys preparing for the Christmas Eve Service in 2011 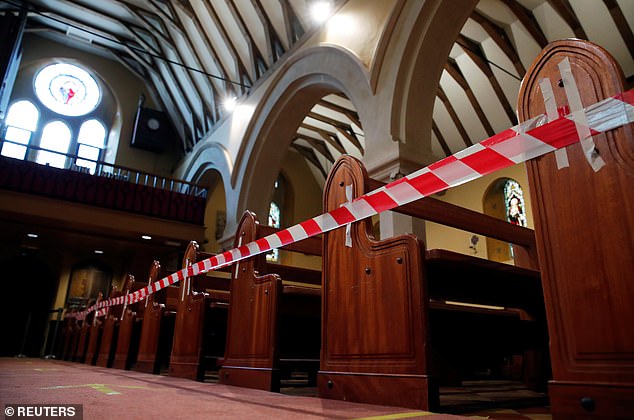 More than 5.5million people attended them in 2018, according to the most recent figures. Pictured: Warning tape is seen inside the empty Church of The Immaculate Conception and St Joseph, in Hertford, as social distancing measures are prepared

But curbs on church services imposed by Whitehall following the easing of lockdown currently say there may be no hymns or choirs in places of worship, and wind instruments, such as recorders often played by children, or trumpets, may not be used.

Virus may be able to linger in the air for hours, say scientists

By Eleanor Hayward for the Daily Mail

‘Emerging’ evidence shows Covid-19 can spread through tiny particles that linger in the air for hours, the World Health Organisation said yesterday.

It had previously insisted the virus was primarily spread through large droplets released through coughs and sneezes and which fall to the ground within two metres.

But the agency backtracked after coming under pressure from scientists who believe Covid-19 can be carried by micro-droplets which float in the air and can be inhaled.

The WHO yesterday acknowledged the possibility of airborne transmission in ‘crowded, closed, poorly ventilated settings’. This has major implications for guidelines to prevent the spread of coronavirus – as handwashing and social distancing are not effective at cutting airborne transmission.

Unlike droplets, which settle on hard surfaces, microdroplets can linger in the air for hours after being expelled through breath or speech. They can also travel further than two metres, making good ventilation important and potentially putting pub and restaurant customers in danger.

An infectious disease specialist yesterday said the WHO was waiting to examine the results of studies into the risks. Professor David Heymann, who is based at the London School of Hygiene and Tropical Medicine, added: ‘One of these is to put an animal that can be infected with this virus into various places around rooms in hospitals or wherever, to see if those animals are being infected, and that’s being done with hamsters.’

The WHO changed its stance after 239 scientists from 39 countries wrote an open letter highlighting potential risks from tiny respiratory particles.

Professor Benedetta Allegranzi, infection prevention chief at the international body, responded by saying: ‘We acknowledge there is emerging evidence in this field.

‘We have to be open to this evidence and understand its implications.’

They say that there should be only one singer, who must stand behind a screen, and the rules recommend that churches use recorded music in services.

The admission that the big services which are for many a central highlight of Christmas will not happen is to be made to the Church of England’s parliament, the General Synod, which is to meet in an emergency online gathering at the weekend.

‘Senior figures are to face a battery of sometimes hostile prepared questions from lay members and from clergy, many of which are critical of the way churches were closed during lockdown.

The bishop who has been heading the Church’s efforts to re-open, the Bishop of London, the Right Reverend Sarah Mullally, is to tell the Synod: ‘Advent and Christmas are inevitably going to look very different.

‘Assuming church buildings are open for worship, gatherings will need to be smaller to enable social distancing, with logistical challenges around cleaning, managing people flows etc.’

Dame Sarah, a former Department of Health Chief Nursing officer, added: ‘Resources for individual use and national online services will be produced by the national digital team.

In addition, guidance notes for parishes are presently being worked on.

For example, churches which have traditionally welcomed large numbers to a carol service may find that they need to offer several.

‘Capacity issues may mean that these need to be simpler and easier to manage than may normally have been the case.’

Dame Sarah opened the prospect that many churchgoers will be offered carol services, but only on their computer screens: ‘It may well be the case that an increased proportion of our population wish to engage with worship this Christmas, be that online or offline.’

The 5.5 million people numbered as attending carol services in 2018 were those worshipping in the Church of England alone. Similar limitations on carols will apply to services in the Roman Catholic and other churches.

A further 2.4 million people went to CofE Christmas Day services, exactly double the congregations at the festival Christians regard as the most important, Easter.

This year there were no Easter services, and instead the Archbishop of Canterbury, the Most Reverend Justin Welby, conducted an online ceremony from his kitchen at Lambeth Palace.

Questions put by the Synod have included angry demands to know why churches were shut during lockdown even to their own clergy. 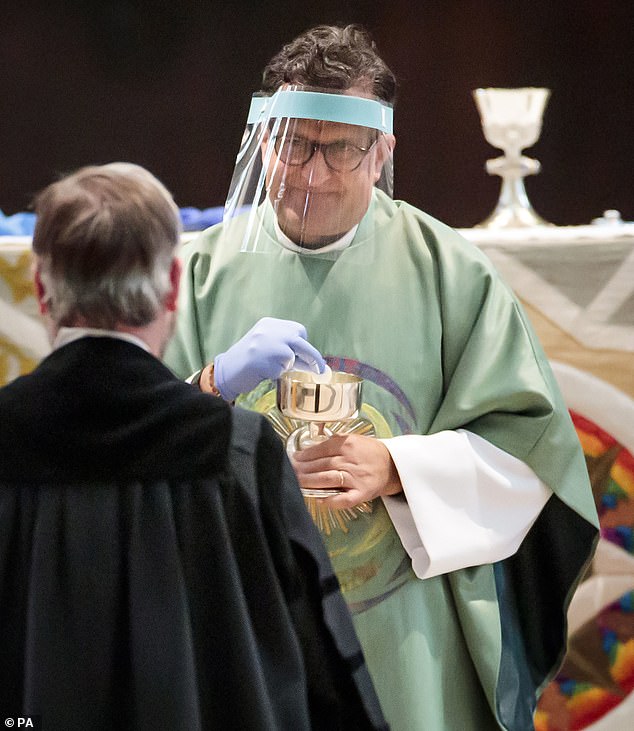 Curbs on church services imposed by Whitehall following the easing of lockdown currently say there may be no hymns or choirs in places of worship. Pictured: The Dean of York, the Right Revd Dr Jonathan Frost leads the first public Holy Communion to be held at York Minster since the easing 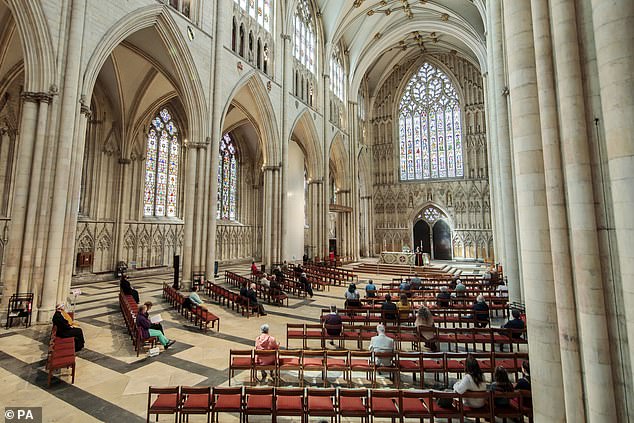 This year there were no Easter services, and instead the Archbishop of Canterbury, the Most Reverend Justin Welby, conducted an online ceremony from his kitchen at Lambeth Palace. Pictured: Worshippers social distance during the first public Holy Communion to be held at York Minster since lockdown measures were introduced

Archbishop Welby is to say in response that there will be a review of the shutdown, which was undertaken without legal advice. He is to add: ‘While praying in a church building is very important for clergy (and others), it could not be considered an essential practice.’

Further questions are critical of bishops who took to social media to demand the sacking of the Prime Minister’s aide Dominic Cummings over his trip to the North East during lockdown.

Bishops are also to admit to the Synod that while some junior clergy were furloughed during the lockdown, the CofE’s 116 bishops did not consider taking a pay cut themselves.