Carolina Panthers are ‘listening to offers’ for star running back Christian McCaffrey, as team looks ahead following 1-4 start and the firing of head coach Matt Rhule

The Panthers are reportedly ‘listening to offers’ for their star running back Christian McCaffrey, as the team mulls what to do before the Nov. 1 trade deadline after a 1-4 start.

Carolina’s previous head coach Matt Rhule was relieved of his duties this week following the poor beginning to the season, and the Panthers could now look to rebuild.

Steve Wilks has taken over on an interim basis for the franchise which has not been to the playoffs since 2017.

ESPN reported Saturday that the Panthers had already received – and rejected – at least two inquiries into the 26-year-old playmaker, and would only consider what they believe to be ‘significant’ offers.

According to the report, such an offer would include multiple draft picks or a high draft pick, with the team prepared to hold onto McCaffrey past the deadline if that price is not met.

It makes sense why the Panthers would look to keep McCaffrey barring a big offer.

The former Stanford back is a huge threat both as a runner and receiver, and became just the third player in NFL history to record over 1,000 rushing and receiving yards each in his scintillating 2019 season.

However, McCaffrey has experienced major injury problems since that historic year, playing just 10 games combined over the course of the next two years. 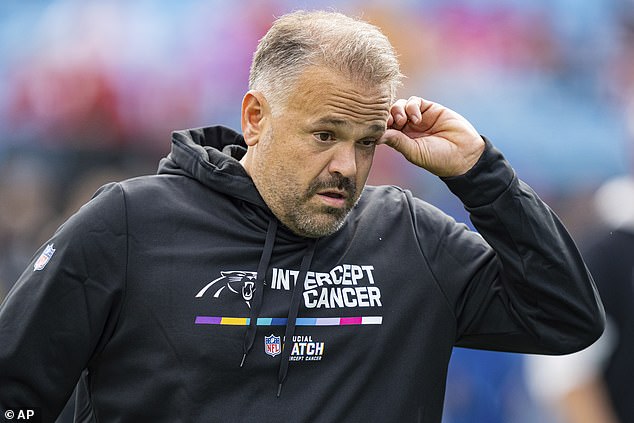 This year, he’s yet to miss a game and has played impressively despite his team’s tough start, with 512 scrimmage yards and three total touchdowns over five games.

If McCaffrey was to be dealt, it would make sense for a contending team to move for the dual-threat star given his shockingly low base salary.

Though the running back will actually take home $8.6million this year, more than $7.3million was converted into a signing bonus back in March, giving him a roughly $1million base salary that many a playoff team would be happy to take on.

McCaffrey’s base salary next season will increase to $11.8 million.

While Carolina may not be actively shopping McCaffrey, another player on their offense who seems more likely to get moved before the deadline is wideout Robbie Anderson.

The former Jets receiver was named a ‘strong potential deadline trade candidate’ by the ESPN report, and would probably welcome a change of scenery given the horrid quarterback play he’s often endured throughout his career.

Anderson has played under Sam Darnold (in both New York and Carolina), Teddy Bridgewater, a highly diminished version of Cam Newton last year and Baker Mayfield, who has struggled in 2022 since arriving in Carolina last offseason.

The speedy receiver is just two years removed from an 1,000-yard season, and could certainly be of use to a team willing to part with a pick.