Love Island presenter Caroline Flack begged for her assault case to be dropped in a handwritten note she left on the day she died, her inquest heard today.

The 40-year-old was found dead on February 15, the day after hearing the Crown Prosecution Service would go ahead with a trial for allegedly assaulting her model and former tennis player boyfriend Lewis Burton, 27.

Today, Poplar Coroner’s Court heard new details of a note that was found near her body, which read: ‘Please let this court case be dropped and myself and Lewis find harmony.’

The TV star’s twin, Jody, who is watching the inquest on a video link with her mother, Christine, confirmed the note was written in her sister’s handwriting.

Flack had pleaded not guilty to assault by beating at Highbury Corner Magistrates Court on December 23.

She strongly denied the charge, while her family and management slammed the CPS for pursuing the case, branding it a ‘show trial’ which caused her to take her own life.

Caroline Flack was found dead on February 15, the day after she had learned the CPS was charging her with allegedly assaulting her former tennis player and model boyfriend Lewis Burton, 27. They are seen on a night out in London on October 16, 2019

The star’s family had increasing concerns about her mental state as the trial date got closer, while Mr Burton also called for the case to be dropped, claiming it was an accident.

The TV presenter Caroline Flack tried repeatedly to take her life before a “show trial” that prosecutors initially intended not to pursue, an inquest was told yesterday.

The former host of Love Island and The X Factor died on a fourth attempt on February 15, a day after learning that prosecutors had decided to pursue the case against her. Flack’s twin sister, Jody, discovered her body and tried to save her through CPR.

Lisa Ramsarran, a deputy chief Crown prosecutor in north London, told the court yesterday that the CPS decided Flack should only be given a caution as it was ‘not in the public interest’ to proceed, but the police pushed for an assault charge.

She also said the CPS had considered her mental health while deciding whether to authorise a charge against her but decided the risk was ‘low’.

However, that decision was challenged by the Met Police and a legal manager who reviewed the case ruled Flack should be charged with assault by beating.

Metropolitan Police Detective Inspector Lauren Bateman was the first witness called to give evidence at the inquest today. 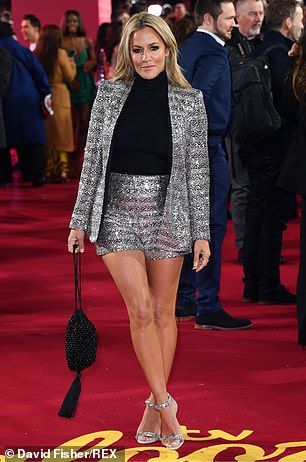 Flack’s family had become increasingly concerned about her mental health in the weeks before her death. She is pictured at the Royal Festival Hall in London on November 12, 2019

She said she was the most senior detective on duty in the area on December 12, 2019, when Flack was in custody for allegedly assaulting her boyfriend, Lewis Burton.

She said she was in an open-plan office with the investigating officer and the officer due to take on the case.

She then started talking to them about the case, she said.

‘We discussed whether it was possible for a caution. You need the same level of evidence to caution and charge. What differs when you consider a caution is the gravity of the offence, which informed my decision-making.

‘In relation to Caroline Flack’s interview, in my opinion there was no clear admission of guilt, it was unclear what she was admitting to.

‘Obviously Mr Burton believed he was assaulted with a lamp when he was asleep, but that is not the account she had given.’

DI Bateman was not present for Flack’s police interview, but said the lack of admission from her meant a caution was not appropriate.

A section from the police incident report from the alleged assault was read at the inquest.

It said: ‘Ms Flack was naked and covered in blood, apparently from cuts to her left wrist. Mr Burton was in boxer shorts and bleeding from a cut on his forehead.

‘He made an allegation he had been asleep in bed with Ms Flack. He had been suddenly woken by her hitting him on the head with some force.

‘Ms Flack apparently broke a glass candle holder and used the broken glass to cut her own wrist. Flack made a number of admissions in the presence of police officers, statements such as: ‘I hit him, he was cheating on me.”

‘At this time it is unclear what object was used to assault Mr Burton. He assumed it was a desk fan or a lamp. MF phone has been seized as it has a significant amount of blood on it, and a crack on one of the corners.’

Caroline Flack gave an account to police at the scene, read to the inquest, in which she said: ‘I did, I whacked him round the head like that,’ gesturing a swinging motion with her right hand to police, the inquest heard.

Flack told police: ‘I admit I did it. I used the phone. I had his phone in one hand, and my phone in the other.

‘I whacked him round the head – there’s no excuse for it, I was upset.’ 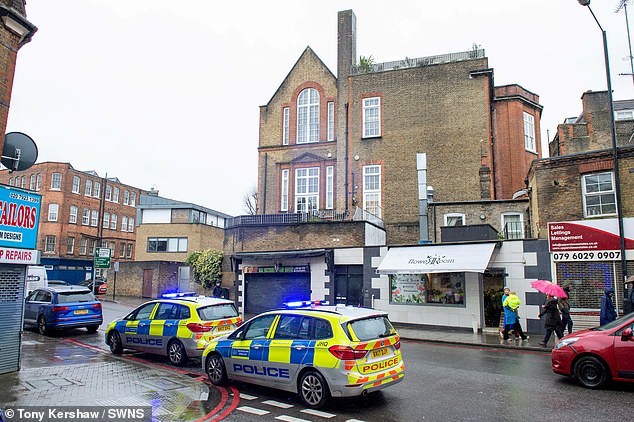 Today, Poplar Coroner’s Court heard new details of a note that was found near Flack’s body at her London flat (pictured on February 16, a day after her death). It read: ‘Please let this court case be dropped and myself and Lewis find harmony’