Caroline Flack’s 6ft 4in boyfriend Lewis Burton shouted ‘I was normal till I met her’ as she was arrested and charged with assault after an alleged fight the couple had at her home, it has been claimed.

Police were called to Flack’s home in Islington, north London, in the early hours of Thursday morning to reports of a man being assaulted.

Eyewitnesses have described ‘total chaos’ outside Flack’s home as police arrived to diffuse the situation between her and her 27-year-old boyfriend.

The former professional tennis player is said to have shouted at police as he was led away, while Flack was reportedly left in need of hospital treatment after accidentally cutting herself on broken glass during the incident. 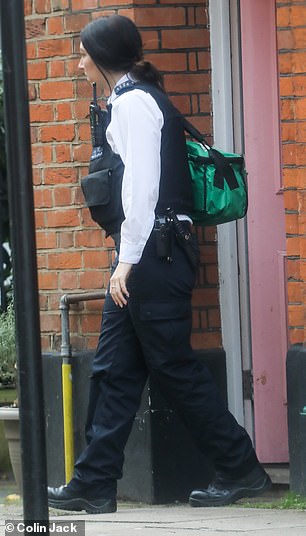 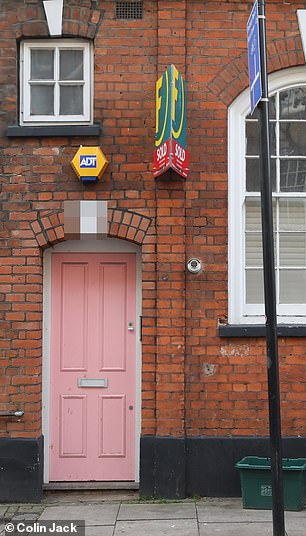 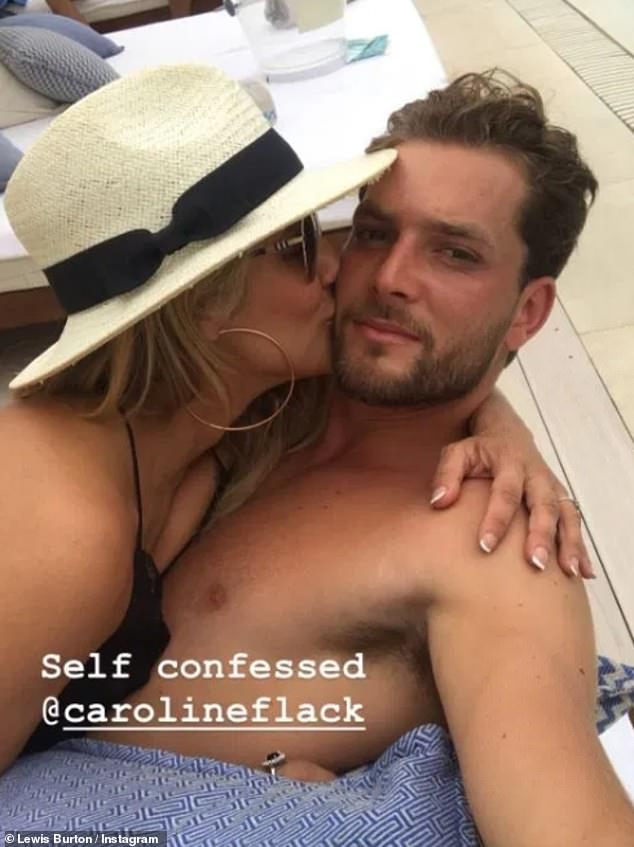 Police were called to Flack’s home in Islington, north London , in the early hours of yesterday morning to reports of a man being assaulted (she is pictured with boyfriend Lewis Burton in October) 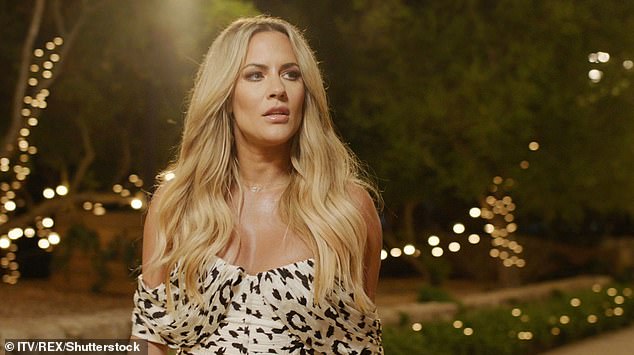 The TV presenter’s arrest has thrown ITV’s first ever winter version of Love Island into doubt, with filming due to start in South Africa on January 8 (she is pictured on the latest series of Love Island)

According to an eyewitness who spoke to The Daily Star, Mr Burton is said to have shouted at police as they escorted him to a waiting car: ‘Bruv, I was normal until I met her.’

While other neighbours described ‘police cars everywhere’ and shocking scenes despite the couple seeming like ‘they’ve been getting on well’.

Louise Silver, 36, told MailOnline: ‘It was total chaos. There were police cars everywhere. At first I thought it might have been a terrorist incident but then I looked out and saw police going into Flack’s home. They brought her out soon after.’

Anton Smith added: ‘There must have been around six police cars and a police van. We see Caroline and her boyfriend coming in and out of the house and around the area.

‘It must have been around 5am and it was total chaos. I was on my way to work and didn’t know what was going on. It was only when I got home that somebody in the block told me she’d been arrested.’

And speaking to The Sun, which learnt of Flack requiring hospital treatment, another neighbour said: ‘There were several police cars at Caroline’s house. I know Caroline and this new man. She’s very friendly and always speaks to us. I hope things sort themselves out.’ 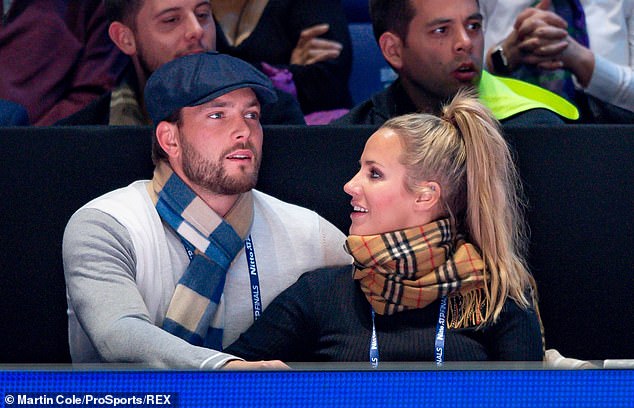 Shocking: Caroline Flack, 40, was arrested and charged with assault by beating on Friday following a fight at the London home she shares with boyfriend Lewis Burton, 27 (pictured in November) 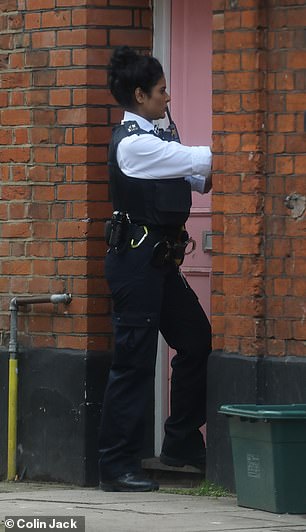 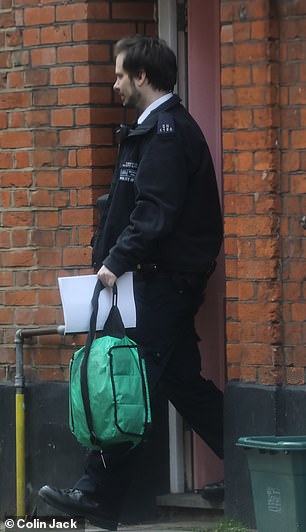 Eyewitnesses have described ‘total chaos’ outside Flack’s home as police arrived to diffuse the situation between her and her 27-year-old former professional tennis player boyfriend (pictured, police at the scene) 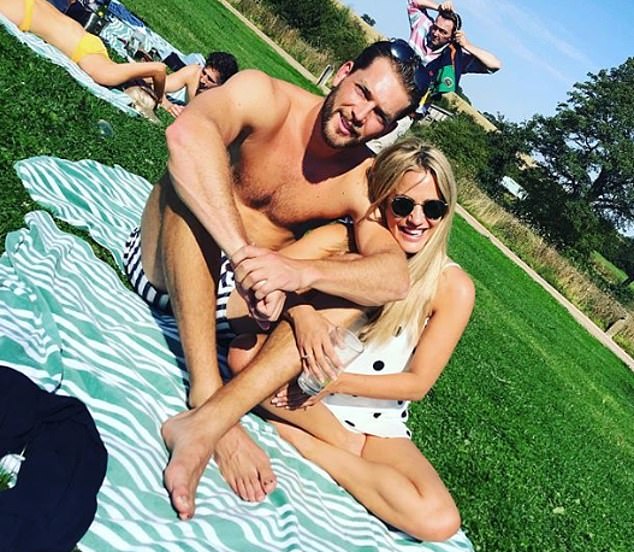 Flack and Mr Burton are pictured together in August. ITV have not yet commented on her arrest

Flack’s good friend Dawn O’Porter, who she met in 2010 when filming I’m A Celebrity…Get Me Out Of Here, threw her support behind the Love Island star following the arrest

The TV presenter’s arrest has thrown ITV’s first ever winter version of Love Island into doubt, with filming due to start in South Africa on January 8.

And a source close to the show told The Sun the incident was an ‘absolute nightmare’ so near to the start of the new series.

Flack was due to jet off on location with a brand new batch of contestants in the first week of January but it is not clear whether she will still be able to go. ITV have not yet commented on her arrest.

The man, believed to be her boyfriend Lewis Burton, 27, was taken to hospital to be treated for his injuries, reports the Daily Star.

Flack’s good friend Dawn O’Porter, who she met in 2010 when filming I’m A Celebrity…Get Me Out Of Here, threw her support behind the Love Island star following the arrest.

She said on Twitter: ‘Woken up to some really hard news about my friend Caroline Flack. Who I love very very much.

‘I will wait until I know the facts before I make a judgement, and I urge you to do the same. This cancel culture doesn’t help anyone.

Flack’s charge comes just a days after her ex-fiance Andrew Brady branded their relationship ‘toxic’ and claimed it ‘could have killed him’.

Under section 39 of the Criminal Justice Act 1988, a common assault is committed when they inflict violence on someone or make that person believe they are being attacked.

They do not have to physically attack the person, spitting or raising a fist would suffice.

But if violence is used in the assault they can be charged with assault by beating.

An eyewitness told the Star: ‘There have been police outside since 5.30am and [Caroline’s] boyfriend Lewis Burton has been taken away.

‘There were six police cars including a van. I thought a criminal had escaped but then saw them running into her house. They were in there for over two hours.’

A member of the public who runs a business near Flack’s London property said CCTV had shown a number of police vehicles and ‘blue flashing lights’ in the early hours of Thursday.

Six police cars were pictured outside the house early on Thursday, with images obtained by MailOnline showing officers securing the house and carrying first response kits soon after.

A Metropolitan Police spokesman said: ‘Caroline Flack, 40, of Islington was charged on Friday, 13 December with assault by beating.

‘She will appear on bail at Highbury Corner Magistrates’ Court on Monday, 23 December.

‘This follows an incident at approximately 05:25hrs on Thursday, 12 December after reports of a man being assaulted. He was not seriously injured.’

The man was treated by paramedics and a London Ambulance Service spokesman said: ‘We were called yesterday (Thursday 12 December) at 5.28am to reports of a person unwell in Islington.

‘We sent an ambulance to the scene and took a person to hospital.’

A representative for Flack confirmed she was involved in a ‘private domestic incident’ but refused to comment further.

They said in a statement: ‘We confirm that police attended Caroline’s home following a private domestic incident.

‘She is co-operating with the appropriate people to resolve matters. We will not be making any further comment for legal reasons.’

An ITV spokesman added: ‘We’re not commenting on this story.’ 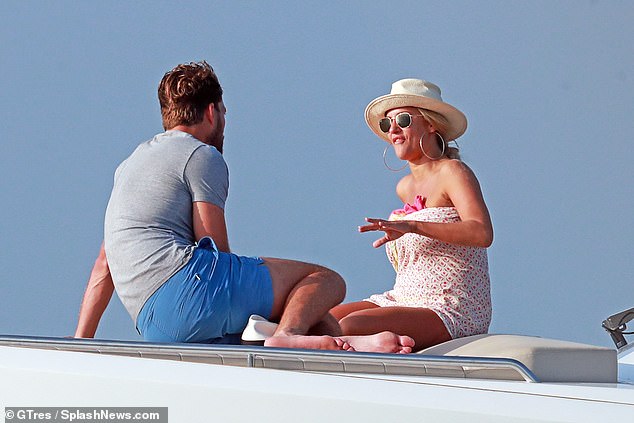 Problems: Their relationship seemed to be on the rocks when they in a furious argument during their Spanish holiday in October 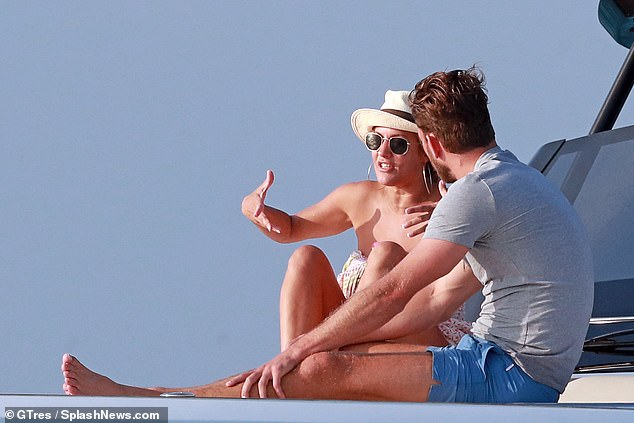 Row: Caroline was pictured engaging in a tense discussion with Lewis as they sat on board the luxury vessel

Singer Ella Eyre, 25, shared a clip on her Instagram stories on Thursday of herself and personal trainer Faisal Abdalla asking Caroline why she wasn’t in attendance at their gym session.  The clip is no longer available to view.

Caroline and her tennis player and model boyfriend Lewis have been in a relationship since July.

Their relationship seemed to be on the rocks when they in a furious argument during their Spanish holiday in October. 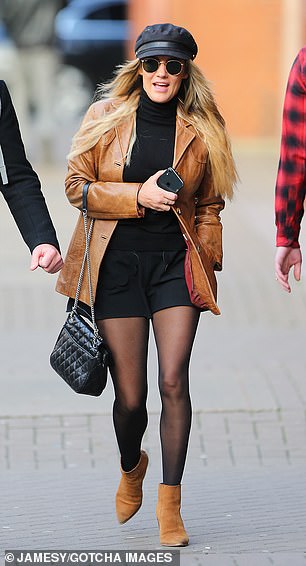 Silent: Caroline is yet to comment on the latest news and her spokesperson is unavailable for comment (pictured on December 11)

Caroline was pictured engaging in a tense discussion with Lewis as they sat on board a luxury vessel while out at sea with a group of their friends in Ibiza.

In August, a source told The Sun the couple that Caroline and Lewis had ‘really hit it off’ after being ‘introduced through mutual friends.’

Lewis is currently signed to Select Model Management following his stint as a professional tennis player.

The hunk began playing the sport at the tender age of seven, and reached a career high when he played the final of the boys’ doubles with George Morgan at Wimbledon in 2010.

Lewis played his last game in professional tennis with Marcus Willis at the Great Britain F2 in Sunderland back in January 2015.

Earlier this year, Caroline embarked on a short-lived romance with rugby player Danny Cipriani, 31, before their relationship fizzled out in May. She was previously engaged to Apprentice star Andrew Brady for just under a year back in 2018.

Last month, Caroline was forced to shut down rumours that she and Lewis were engaged to one another, with her rep saying it’s ‘100% not true.’

While celebrating her 40th birthday that month, she addressed the milestone birthday in an Instagram Story, admitting she was ‘utterly grateful’ for everything. 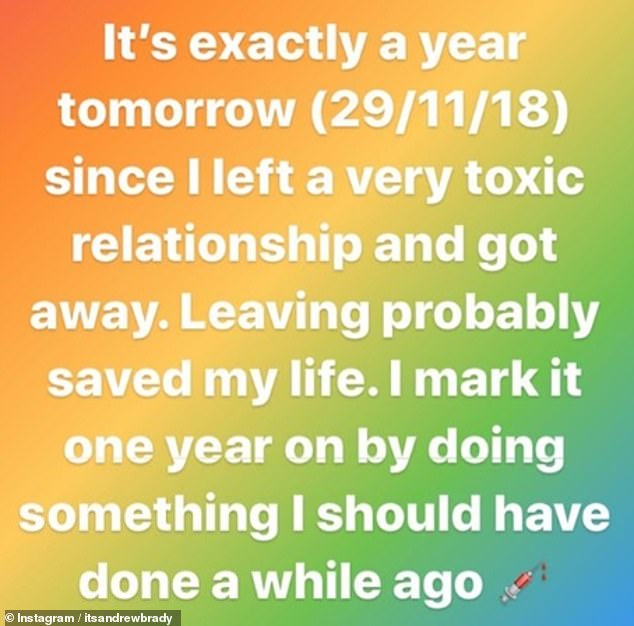 Making changes: Andrew Brady, 29, recently covered a tattoo of Caroline Flack’s initials which he had on his wrist to mark a year since the pair’s relationship ended 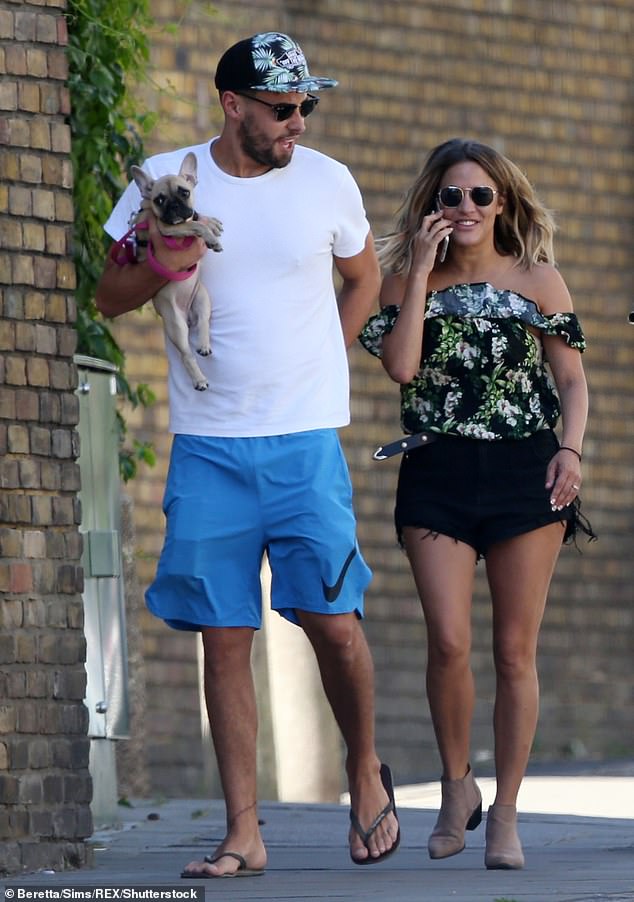 She wrote: ‘Jesus… Last day of my 30s …. and what a ride it’s been so far,’ she wrote. ‘Feeling so utterly grateful for EVERYTHING in my life right now.’

He went on Instagram to reveal he had covered a tattoo of her initials which he had on his wrist to mark a year since the pair’s relationship ended.

The former Apprentice star, 29, took to Instagram as he visited Bondi Ink to have the ‘CF’ covered with the shape of Australia.

Andrew was engaged to Caroline, 40, last year but since they split – which he said ‘probably saved his life’ – he has relocated to Sydney.

In a series of stories Andrew smiled as he prepared to go under the needle and wrote a message to explain why he decided to get some new ink.

He wrote: ‘It’s exactly a year tomorrow since I left a very toxic relationship and got away.

‘Leaving probably saved my life. I mark it one year on by doing something I should have done a while ago’

After having his new tattoo Andrew shared another video where he thanks Bondi Ink for ‘covering up this absolute monstrosity.’

He continued: ‘So moral of the story is don’t get your partner’s initials tattooed on you because when it all goes t**s up you’re gonna have to get it covered up.’

No doubt Caroline’s TV career could all be at risk. The personality, who has a net worth of £5.6million is due to host Love Island’s debut winter edition which starts in January.

She was also the host of Channel 4’s The Surjury which was slated to be aired in early 2020. 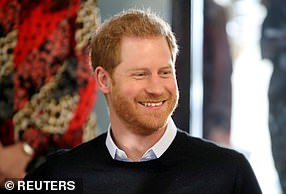 Short fling? Caroline revealed she was introduced to Prince Harry by their mutual friend Natalie Pinkham in 2009 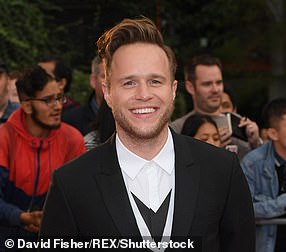 Close: Caroline candidly admitted she nearly slept with Olly Murs when they presented The Xtra Factor together in 2011 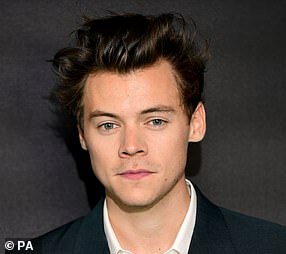 Toyboy lover: Back in 2011, Caroline was 31 when she started romancing 17-year-old Harry Styles 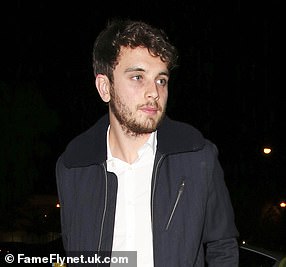 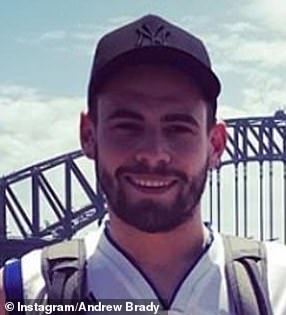 Wedding bells: Caroline and Andrew Brady got engaged in April 2018 before calling it quits later that year 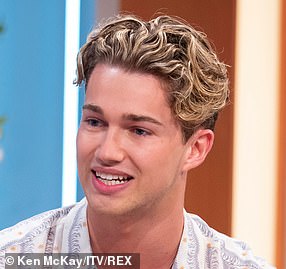 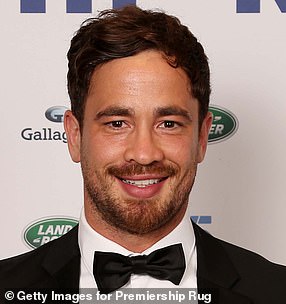 Hunk: The presenter is said to have dated Danny Cipriani for around eight weeks earlier this year