Caroline Kennedy greeted Prince William and the Princess of Wales backstage at the Boston Celtics game last night after bad weather delayed her flight from New York and prevented her from attending the opening ceremony of the Earthshot event.

John Kerry, who was also due to attend, remains unwell after contracting COVD-19 at COP27 in Egypt. He did not meet the prince and princess last night but hopes to be fit enough to attend the Earthshot Gala tomorrow.

Kennedy, the daughter of President John F. Kennedy who is currently serving as the US Ambassador to Australia, said she experienced ‘disrupted travel plans’ due to the harsh weather lashing the east coast.

She rushed straight to the Celtics game upon arrival, where she greeted the royal couple.

Caroline Kennedy met the Prince and Princess of Wales at the Boston Celtics game after rushing to Boston from New York. Her flight was delayed by bad weather 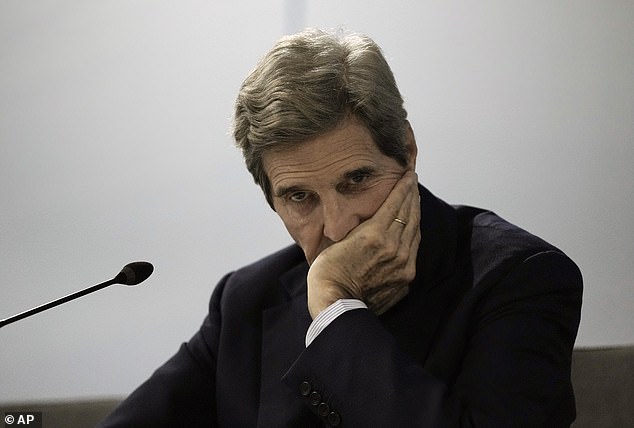 U.S. Special Presidential Envoy for Climate John Kerry, 78, (pictured on November 17, his last public appearance) did not attend last night’s event as expected. He tested positive for COVID-19 after the summit 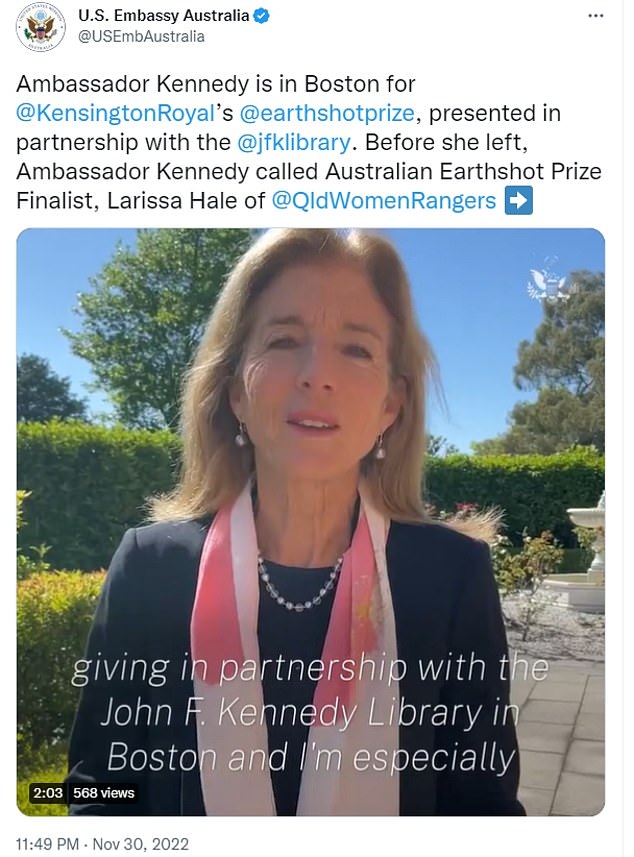 Ambassador Caroline Kennedy was also due to attend last night’s event but did not make an appearance. She is shown in Australia, where she lives, before flying to Boston in a video released yesterday

‘Unfortunately Ambassador Kennedy missed the opening ceremony for the Prince and Princess’ Boston visit due to weather delays in New York.

‘She was able to say hello to them later that evening during a Celitcs game, after her travel issues in New York were resolved.

‘The Ambassador looks forward to welcoming the Prince and Princess to the Kennedy Library tomorrow as part of their visit to Boston for the Earthshot Prize,’ a representative told DailyMail.com.

Kerry and Kennedy were supposed to join the royal couple as they spoke at the opening of the Earthshot Prize awards, which were named after JFK’s ‘moonshot’ speech.

The awards commemorate people who have made significant contributions to environmentalism.

Instead, they were joined by Massachusetts Governor-elect Maura Healy and Boston Mayor Michelle Wu as they kicked off the days-long event by lighting up the city in green.

Their trip has been marred with a racism row brewing in the UK. Prince William’s godmother Lady Susan Hussey has resigned after being accused of racism following an event at Buckingham Palace. 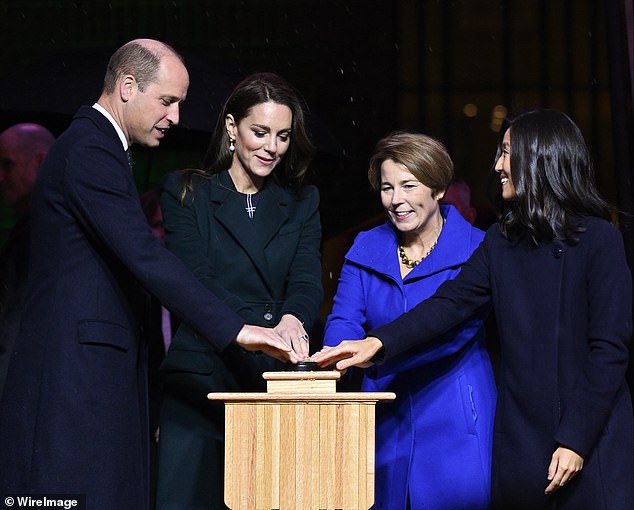 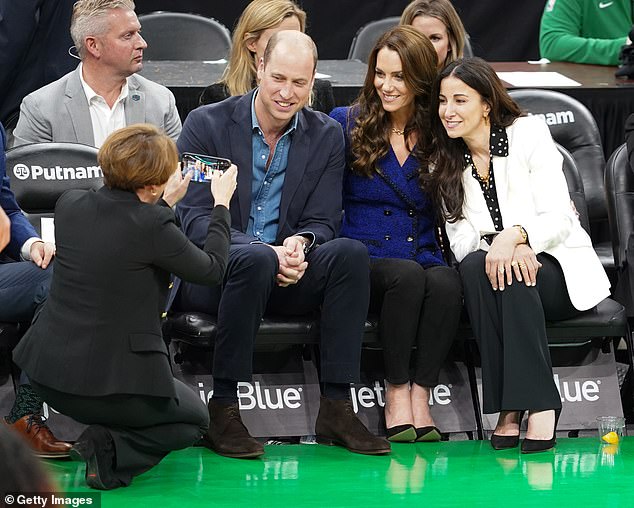 They then attended a Celtics game, sitting next to owner Wyc Grousbeck and his wife Emilia Fazzalari

In a statement, William’s spokesperson said: ‘This is a matter for Buckingham Palace but as the Prince of Wales’ spokesperson, I appreciate you’re all here and understand you’ll want to ask about it. So let me address it head-on.

‘I was really disappointed to hear about the guests experience at Buckingham Palace last night. Obviously, I wasn’t there, but racism has no place in our society. The comments were unacceptable, and it is right that the individual has stepped aside with immediate effect.’

The incident has already begun to overshadow the royal trip to Boston.

Just minutes before William and Kate took to the stage at the Earthshot event, Reverend Mariama White-Hammond – the city’s Chief of Environment, Energy, and Open Space – gave a strong speech in which she told the crowd to ‘consider the legacy of colonialism and racism’, particularly when it comes to their impact on climate change.

She continued: ‘The ways it has impacted people across the world and its connection, its deep connection to the degradation of land and our planet that we are all seeking to reverse.

‘The stories lost, the species made extinct, but also the persistence of people in the face of oppression and the fundamental dignity of all of our relations.’ 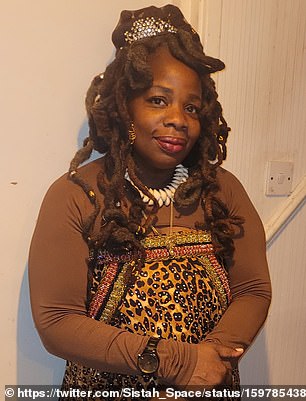 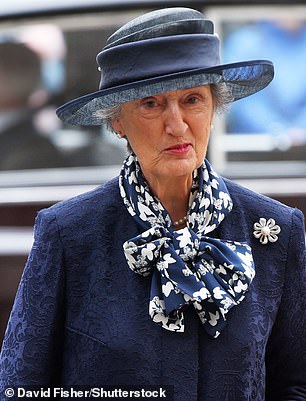 The trip comes amid a brewing racism row in the UK, where William’s godmother, Lady Susan Hussey (right) has resigned as one of The Queen’s Ladies in Waiting after being shamed for allegedly ‘interrogating’ Ngozi Fulani (left) at an event at Buckingham Palace. Fulani has told how Hussey quizzed her on where she was from, refusing to accept she was British, and repeatedly asking her if she was from Africa

Although no mention was made of Lady Susan Hussey – who is William’s own godmother – few could fail to connect the controversy with Reverend White-Hammond’s remarks.

Having started her speech by ‘acknowledging the ancestral lands we stand on today’, the Reverend went on to express gratitude to William and Kate for choosing to host this year’s Earthshot Prize.

‘Now you all know, we are a city of many firsts. We are honored to be the first American city and the first city outside of the United Kingdom to host the Earthshot Prize,’ she continued.

Her comments about colonialism come months after another of William and Kate’s international engagements – a March tour to the Caribbean to mark the Queen’s Platinum Jubilee – was shrouded in controversy over accusations that elements of it smacked of ‘colonialism’.

However, even as the Reverend’s remarks about racism and colonialism lingered in the air, William stepped out onto the stage with a smile on his face – following appearances by Maura Healey, the Governor-elect of Massachusetts and Boston Mayor Michelle Wu – to express his ‘delight’ at hosting his first engagement in Boston.

‘Catherine and I are absolutely delighted to be with you today, for our first engagement in the great city of Boston, as we start the countdown to the Earthshot Prize Awards this Friday,’ he said.

‘Thank you to Mayor Wu and Reverend White-Hammond for all your support for the Earthshot Prize.’

He went on to reference assassinated JFK’s Moonshot speech,  describing it as ‘challenge to American innovation and ingenuity.’