‘You listen to the body, you try a few different things’: Caroline Wozniacki feeling good for Australian Open title defence after joyful off-season

After a pre-season that included a holiday in the Maldives and eating burgers at Anfield, Caroline Wozniacki is feeling fit and healthy ahead of the defence of her Australian Open title.

The Dane finally broke her Grand Slam duck in Melbourne 12 months ago with a gruelling victory over Simona Halep but her results tailed off before she revealed in October that she had been diagnosed with rheumatoid arthritis.

Wozniacki knew something was seriously wrong in August when she woke up one morning and could not lift her arms above her head.

But knowing what she is up against has allowed the 28-year-old to tailor her preparation and recovery accordingly and she heads into a first-round clash with Belgian Alison van Uytvanck on Monday feeling positive.

‘I think you just always try to figure out what’s working and what’s not, then you listen to the body, you try a few different things,’ said Wozniacki.

‘For me, it’s just all the time making sure I get good massaging, good treatments, ice baths, stretching, do everything even more thoroughly than maybe in the past. Then you just listen extra. If you’re not feeling good one day, then you take it easier.

Wozniacki, who is seeded third, is determined to enjoy the experience of defending her biggest title.

She said: ‘I’m just excited. I think it’s a positive to be here as the defending champion. I’m just taking it as a nice, fun challenge. I can’t believe it’s already been a year. It doesn’t feel like it to me. 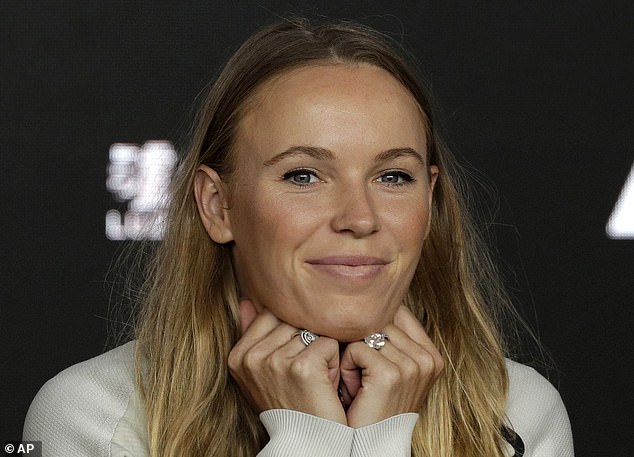 ‘But it’s great to be back. My first practice was on Rod Laver, and it was just nice. I felt comfortable straightaway when I hit balls on that court. It was a good feeling. Then you see your photos all over the place, which is cool.’

Wozniacki made sure she enjoyed her off-season with fiance David Lee and squeezed in a trip to Anfield to watch her beloved Liverpool beat Fulham in between holidays.

And the Dane, somewhat surprisingly, found herself seduced by the burger van.

She said: ‘If you ever go, they have great burgers right outside. There’s a huge line outside one of them. I’m like, “What is this?” They had fries, all sorts of stuff. I was like, “We have to try it, right, while we’re here”. It was really, really good.’ 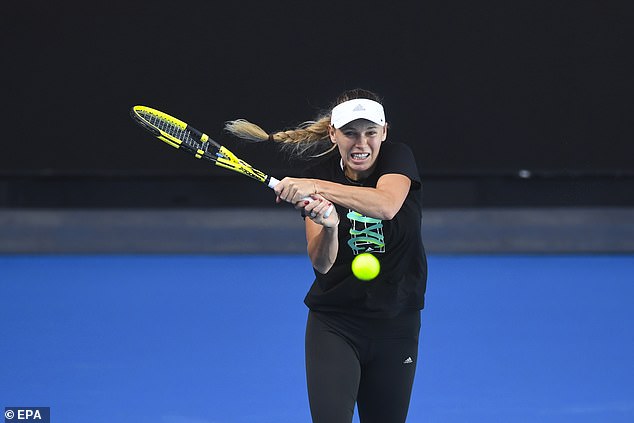