Caroline Wozniacki survived a wobble in sight of the finish line to defeat Elise Mertens and reach her third Grand Slam final at the Australian Open.

All was going swimmingly for the world No 2, who is trying to win her first major title in her 43rd tournament, until she served for the match at 5-4 in the second set and from 30-0 lost four straight points, double-faulting on the last of them.

After losing 11 of 12 points, Wozniacki found herself facing two set points, but she composed herself, saved them and went on to win 6-3, 7-6. 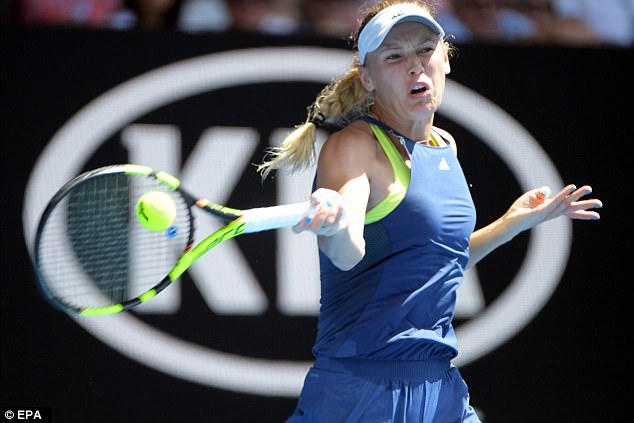 The No 2 seed is into her first Australian Open final after a 6-3, 7-6 win on Thursday

The 27-year-old revealed ahead of the match that she is still haunted by her last appearance in the semi-finals seven years ago, when she held match point against Li Na but lost, and that added to the tension.

She said: ‘It means so much to me. I got really tight at 5-4. After two good first serves, I thought calm down, it’s all good, and then suddenly it wasn’t good any more.

‘I was here in the semi-finals against Li Na in 2011 and I had a match point and I lost, and that was definitely in my mind. I just tried to stay calm and I was lucky to get the win.

‘I am normally very calm. My legs started shaking but I took a few deep breaths and once she had two set points I thought, well, it’s a third set, just go for it.’ 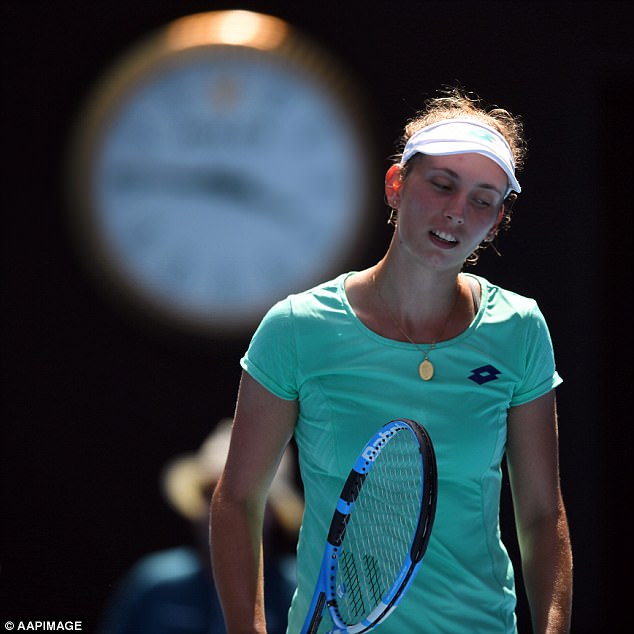 It has been a stunning run for Belgian Mertens, who is mentored by former Australian Open champion Kim Clijsters, and she will break into the top 20 on Monday after almost doubling her career prize money.

But the 22-year-old looked edgy from the start and for more than an hour Wozniacki proved far too consistent, while the Dane’s sometimes vulnerable serve earned her a significant number of free points.

Wozniacki has been riding a wave of confidence since recovering from a seemingly impossible position in round two having trailed Jana Fett 1-5 15-40. 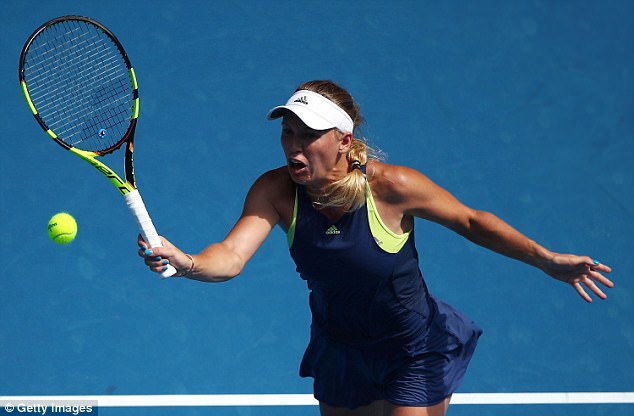 The feeling that she should have been at home has helped Wozniacki play freely and she quickly moved 4-1 ahead to put her stamp on the match.

All looked serene until she sensed the finish line but she succeeded in refocusing and was much the better player in the tie-break.

Wozniacki, who will play either Simona Halep or Angelique Kerber for the trophy, has twice reached the US Open final, losing to Clijsters in 2009 and Serena Williams in 2014.