Following the 2005 Champions League final Jamie Carragher got his hands on more than just a winners’ medal. He also managed to take home Paolo Maldini’s shirt.

But it was not a straight swap after the match as some may have imagined, with Carragher having to steal the iconic defender’s shirt from AC Milan’s dressing room.

Carragher revealed how he got a hold of the shirt of one of football’s best ever centre-backs in The Telegraph ahead of Liverpool’s Champions League final with Real Madrid.

‘I would love to say I swapped shirts with Maldini, one of the greatest players of all time, in some grand, respectful gesture at full-time,’ said Carragher.

‘What really happened is the AC Milan players were so upset they slung their kits and medals and left sharpish.

‘Our younger players – part of the travelling squad – went into the deserted dressing room, took the shirts and losers medals and handed them out.

‘I got Maldini’s shirt, and to this day some of the squad players have the losers’ medals.’

AC Milan’s disappointment was understandable. Captain Maldini gave the Italians the lead in the first minute as they went 3-0 up at half-time, only to lose the final on penalties. 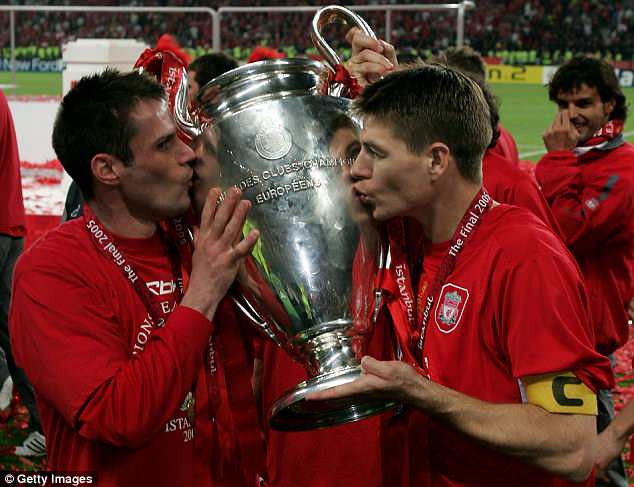 It’s a day that will live long in the memory for Liverpool fans and they will be hoping there is another such special occasion on the horizon when they face Real Madrid.

Madrid go into the final aiming for a third successive Champions League but will face a Liverpool side who have exceeded expectations in Europe this season.

Carragher believes they have what it takes to win it, thanks in part to what Jurgen Klopp has brought to the club in recent years.

‘I have confidence the Liverpool players will perform because they have already done so under the highest pressure,’ says Carragher.

‘Player for player, this Liverpool team are better than the one who won in Istanbul. They have fewer weaknesses. Yet I maintain the true star of this Liverpool is the manager.’