As Sarah Jessica Parker, Cynthia Nixon and Kristin Davis film their HBO Max spinoff “And Just Like That…,” New York City is all abuzz.

The production has been attracting hundreds of Sex And The City superfans hoping to get a glimpse of Carrie, Miranda and Charlotte.

Fortunately onlookers have been posting their photos and videos to social media, giving the rest of us a sneak peek of the action, too.

And just like that, we’ve got Carrie fever! FEMAIL rounds up five of the Manolo-loving character’s most quintessential Carrie looks on the streets of Manhattan this summer, styled by lead costume designer Patricia Field.

Action: As Sarah Jessica Parker, Cynthia Nixon and Kristin Davis film their HBO Max spinoff “And Just Like That…,” New York City is all abuzz

ADD AN ELEMENT OF EDGE

Over the show’s six seasons and two feature films, Mrs. Preston has left her mark on the fashion industry unlike any other female lead.

While filming scenes for the spinoff she was spotted in a hot pink A-line prairie dress offset by an iconic Carrie accessory – her black studded Streets Ahead belt.

The edgy waist cincher first appeared in Sex And The City The Movie when our leading lady wore it with a green floral vintage Dior dress, a pink mini and everything in between.

The unexpected look made such statement it started a movement amongst fashionistas far and wide who immediately embraced the style into their wardrobes.

Bonus points for Carrie recycling the accessory in 2021 as environmental concerns are top of mind for consumers. 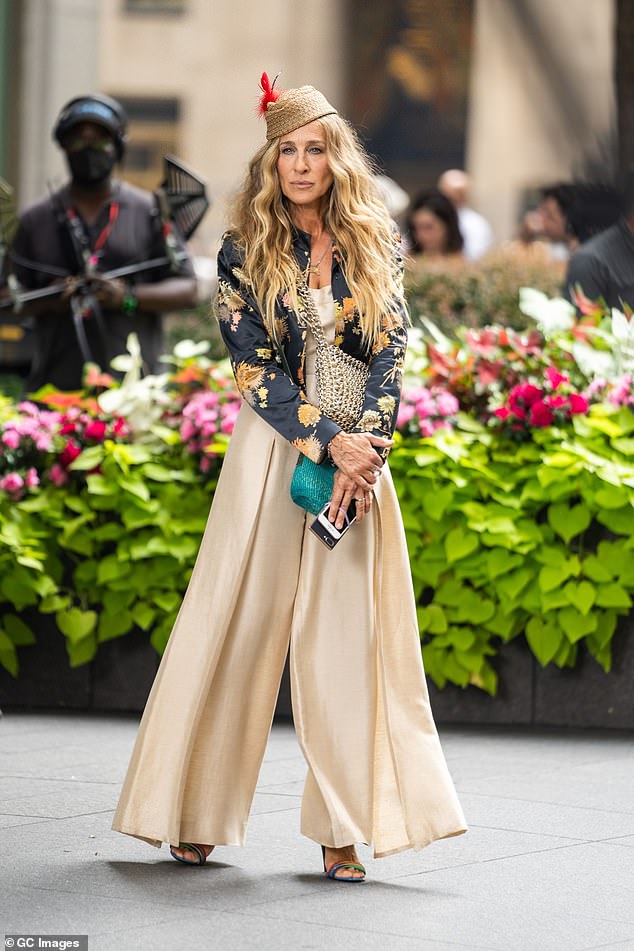 More is more: She takes the over-the-top look even further by accessorizing with a hat, colorful sandals a two crossbody bags

HAVE NO FEAR, MORE IS MORE

The style-savvy sex columnist has always been fearless when it comes to wardrobe.

In fact, it’s her try-anything approach to dressing that has influenced so many trends over the years and attracted a legion of fans.

While filming the spinoff, Carrie struts her stuff in a wide-legged crème jumpsuit topped by a cropped floral blazer.

She takes the over-the-top look even further by accessorizing with a hat, colorful sandals a not one, but two crossbody bags.

More is more for the writer who once said ‘You don’t need a diamond ring when you can have a really big closet.’ 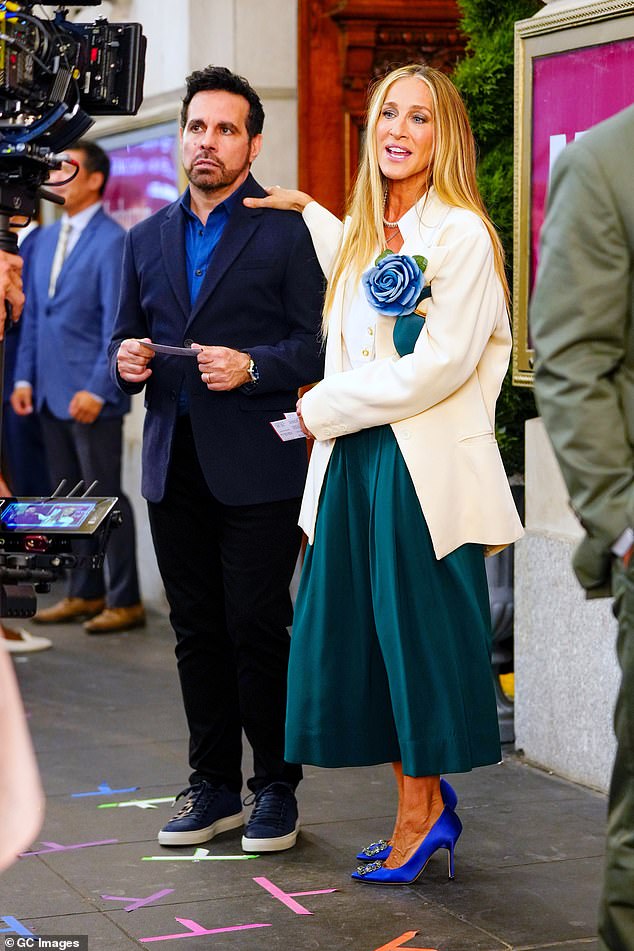 Throwback: She gives her white oversize blazer and indigo blue culottes a girly twist with a few feminine and sentimental accessories

GIVE MENSWEAR A FEMININE TWIST

Menswear-inspired fashions have been trending for quite some time, and yet, Carrie still manages to make the look her own.

While taping And Just Like That she wows us with a white oversize blazer and indigo blue culottes given a girly twist with a few feminine and sentimental accessories.

Her Hangisi pumps by Manolo Blahnik were the “something blue” shoes she wore when marrying Big at City Hall.

And who can forget her flower pins?

The spring-like add-on was affixed to just about everything she wore when she started dating emotionally-sensitive Aidan, it symbolized romance and new beginnings.

Fashionistas far and wide immediately embraced the whimsical brooch in their everyday wear.

The floral motif reappeared during the opening scene of “Sex and the City: The Movie” bigger and better than ever.

During the movie’s opening credits, Carrie is strolling down Fifth Avenue in a white and gold Eugene Alexander dress featuring an oversized flower appliqué. 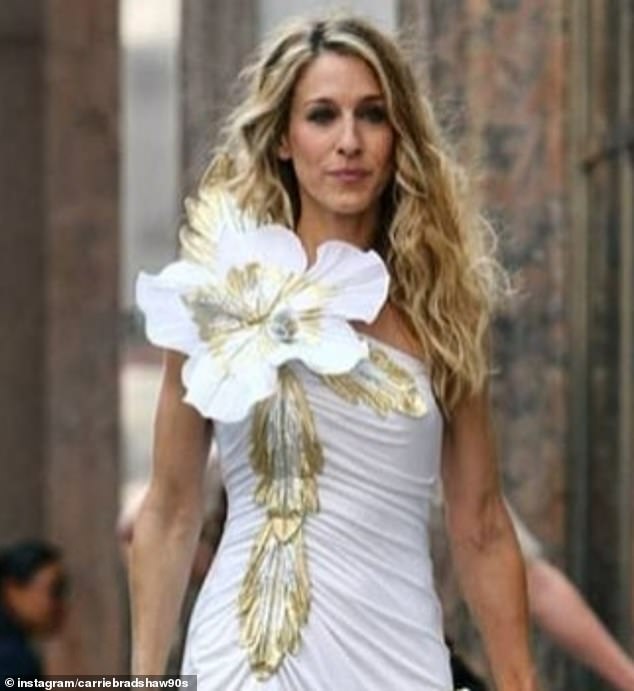 Ahead of the trends: But Carrie’s no stranger to menswear-inspired looks, she’s been rocking them since 2000

But Carrie’s no stranger to menswear-inspired looks, she’s been rocking them since 2000.

In season 4, she donned a navy pinstriped capri suit paired with a contrasting tee in the same pattern to walk Aidan’s pouch, Pete.

Her dog walking look was made Carrie-complete with pointy-toe heels, suspenders and a chocolate pageboy hat.

She elevated the tailored look in SATC The Movie in a pink pinstripe blouse, white vest and matching slacks with a black tie. 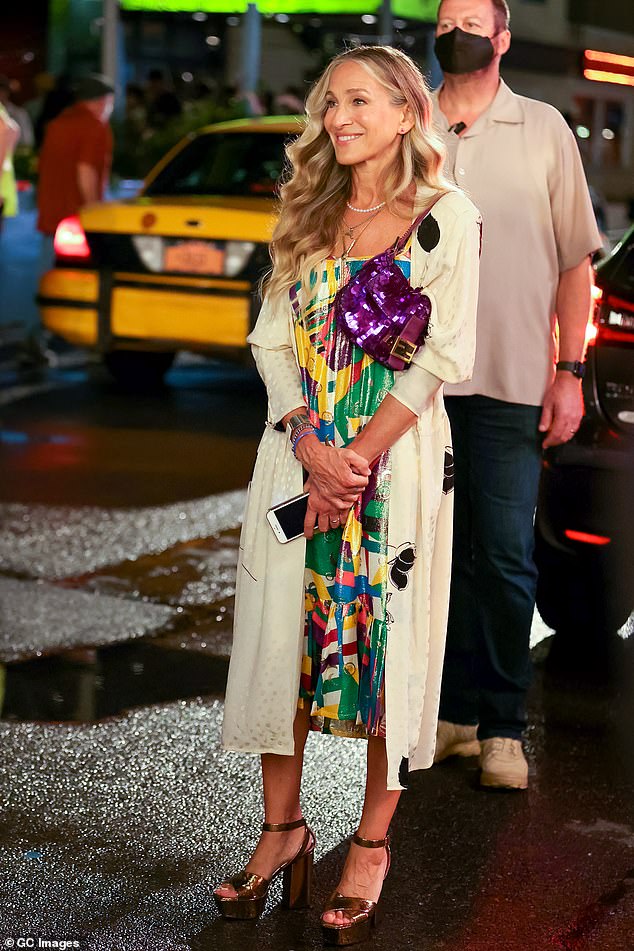 MIX AND MATCH OLD AND NEW

An image on set shows the hopeless romantic in vintage-inspired separates made “IT” girl cool with a few shimmering accessories.

For her farewell date with Big before he left for Napa, Carrie donned a pleated Michael Kors satin and lace camisole dress topped by a glittery MoMo SoHo jacket in Season 4’s ‘I Heart NY’ episode.

The bedroom to boardroom look was made complete with Christian Louboutin sandals (that Miranda later went into labor on) and and her signature nameplate necklace.

Her beloved fluffy outer-layer was racoon and was purchased by the show’s costume designers for $200 from the famous consignment shop Ina’s.

While the character wore the fur often, one of her most iconic looks in the coat was in the SATC movie.

After being woken up by newly single Miranda on New Year’s Eve, Carrie hops out of bed, without thought throws on her fur over her pajamas and and a sequin cap and heads out the door to be by her friend’s side.

As she rushes through the streets of New York trying to hail a taxi in the snow, ‘Auld Lang Syne’ is playing in the background. 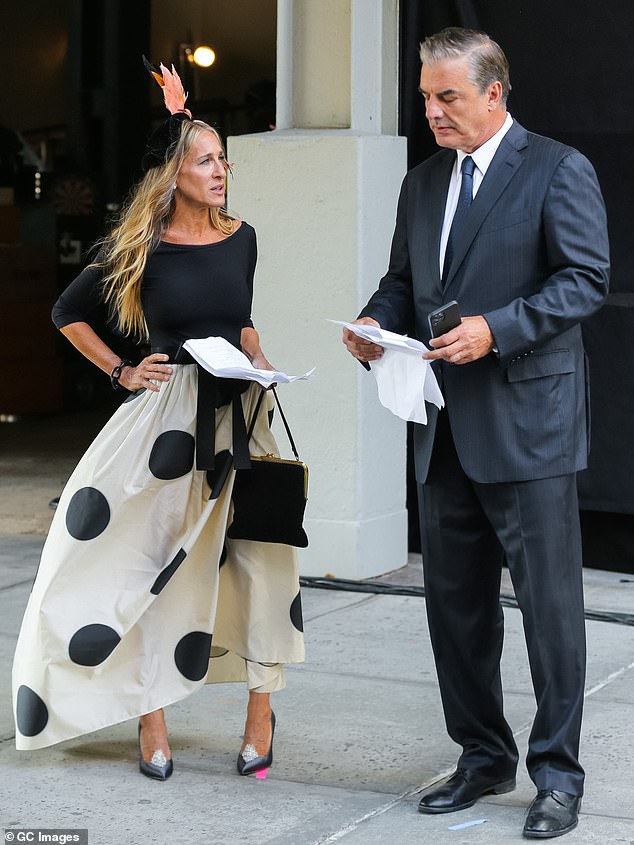 Her fitted black top is offset by a large-and-in-charge skirt featuring a sizable polka dot print.

By the dimensions of the skirt and the bird fascinator sitting on her head, we can only speculate that this is a pivotal scene.

Who can forget in Sex And The City The Movie 2, when she runs into her past love Aidan at a spice market in Abu Dhabi?

While any regular tourist would probably be rocking a practical ensemble consisting of khaki shorts, a t-shirt and sandals, not this traveler. 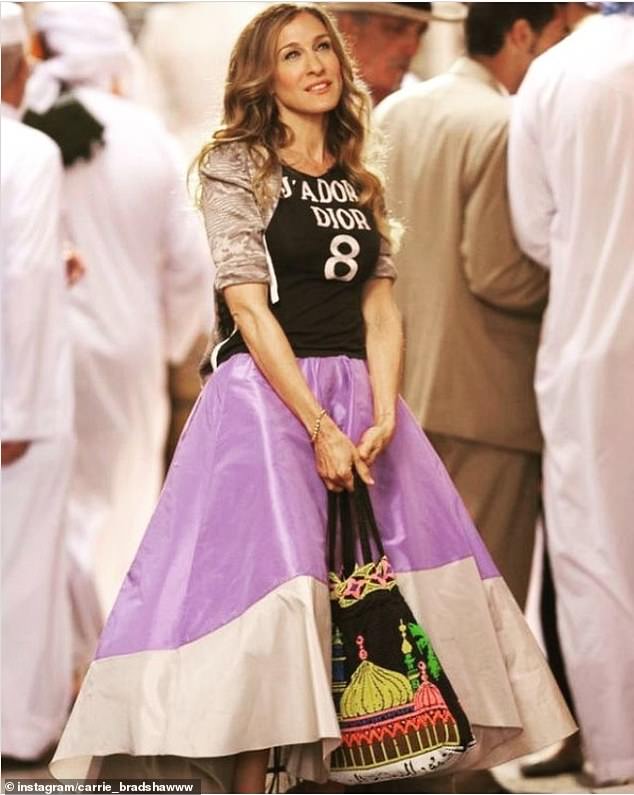 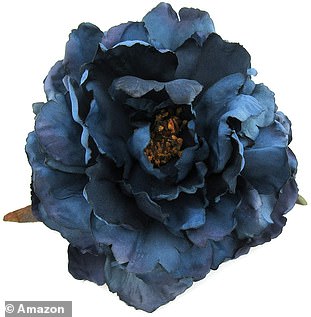 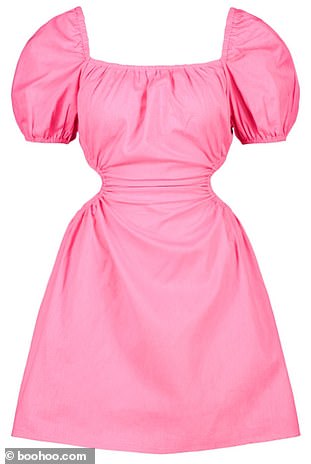 Tie Back Cut Out Cotton Mini Dress by Boohoo, $16; boohoo.com 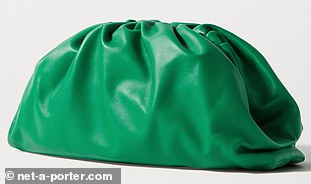