Australia is being hit with extreme weather on both sides of the country with homes damaged and power cut to tens of thousands of properties.

Western Australia is being battered by dangerous conditions, with high winds and heavy rain lashing most of the state, as the remnants of ex-tropical cyclone Mangga collide with a cold front and trough, whipping up gusts of about 100 km/h.

‘This is a rare event for Western Australia, particularly due to the extent of the area affected and the possibility of multiple areas of dangerous weather,’ the Bureau of Meteorology said.

Wild weather conditions have lashed through Western Australia, with a monster weather system bringing wind gusts of more than 100km/h

Thousands of homes and businesses have been damaged in the extreme weather in Western Australia, which experts called a ‘rare event’

The Department of Fire and Emergency Services warned the ‘unusual weather’ could cause significant damage to homes and make travel dangerous, with strong winds of up to 130km/h are already raising dust through large parts of the Gascoyne and Central West areas.

High winds blew apart a house in Geraldton, blew off roofs, lifted cars off the road and damaged shops as well as bringing down trees and power lines.

There were also reports of damaged homes and downed trees and power lines in other regional centres and in Perth on Sunday night.

Western Power said in a statement at 5.30pm that about 50,000 customers were experiencing storm outages across the state including around 37,000 homes and businesses in the Perth metropolitan area.

The power company said it had 70 crews addressing hazards on the network but many households should expect to remain without power overnight.

‘We will not attempt any repair work during the storm because operating elevated work platforms (cherrypickers) and other equipment is not safe to do so because of the dangerous winds,’ it said. 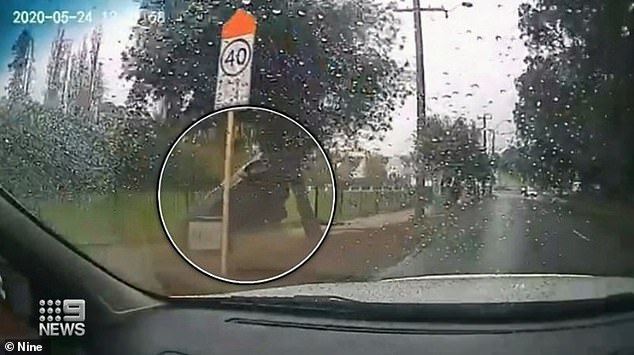 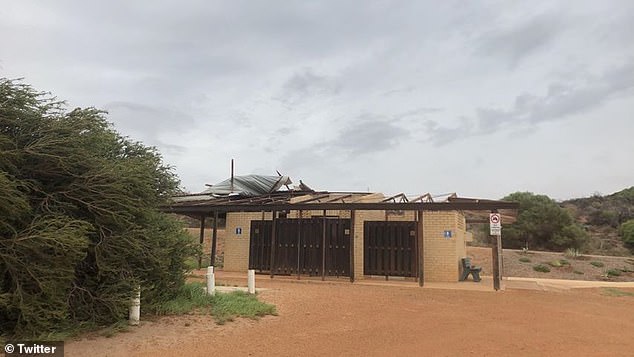 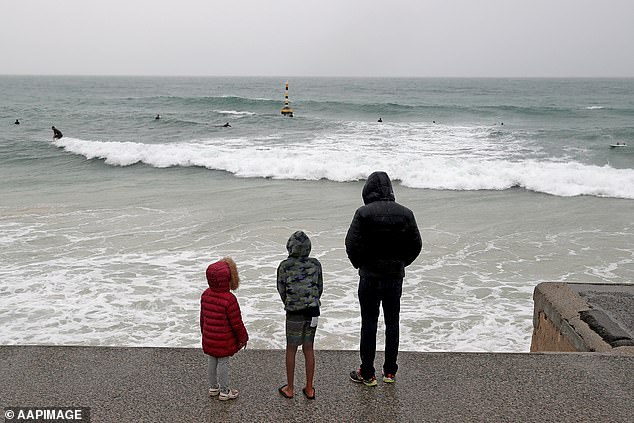 A ‘take action now’ alert is in place for most of the state, including Perth which was slammed with 30mL of rain on Sunday night.

Residents were warned to unplug electrical appliances, avoid using landline phones if there is lightning, close curtains and blinds, and stay away from windows.

Anyone stuck outside should find safe shelter away from trees, powerlines, storm water drains and streams.

Motorists were warned to watch for hazards, such as debris, and to not drive into water of unknown depth and current.

Residents in coastal areas from as far north as Exmouth and south to Augusta have been warned of the potential of a dangerous storm tide. 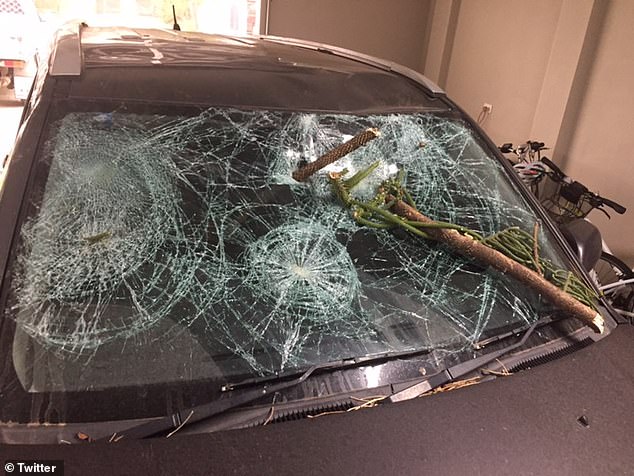 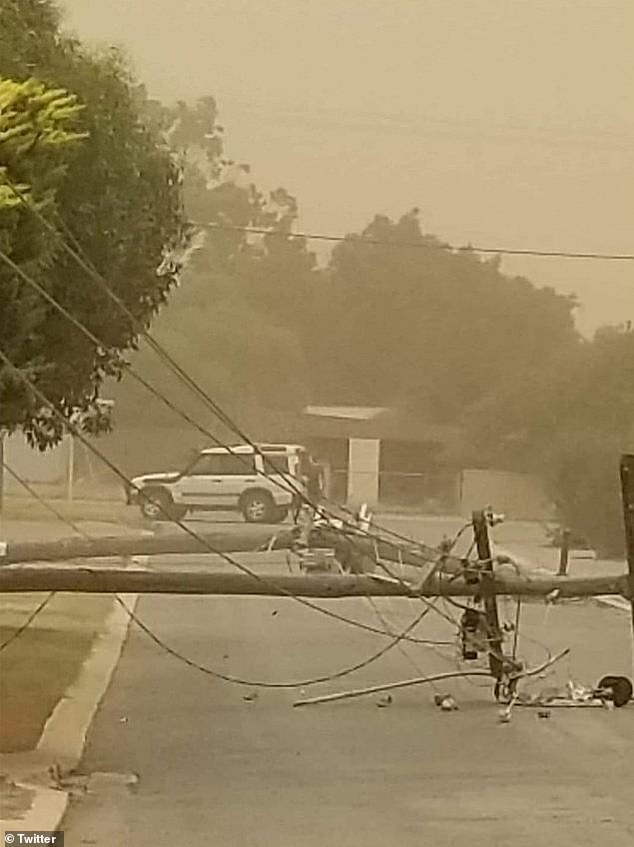 Powerlines were brought down by damaging winds, with Western Power officials warning people to stay at least eight metres away from any fallen powerlines

Winds are expected to ease across the Pilbara and Gascoyne regions overnight, and through the south-western part of the state during Monday.

Brisbane shivered through icy temperatures this weekend, reaching just 15.1C on Saturday in a record-breaking cold snap in Queensland.

Lower-than-average temperatures are set to continue for a few days, although it will be a ‘touch warmer’ than on the weekend, Kimba Wong from The Bureau of Meteorology said.

Ms Wong says records for the lowest maximum May temperature were broken in more than 20 locations across the state.

One of the lowest maximum temperatures recorded in the state was 11.5C in Charters Towers. 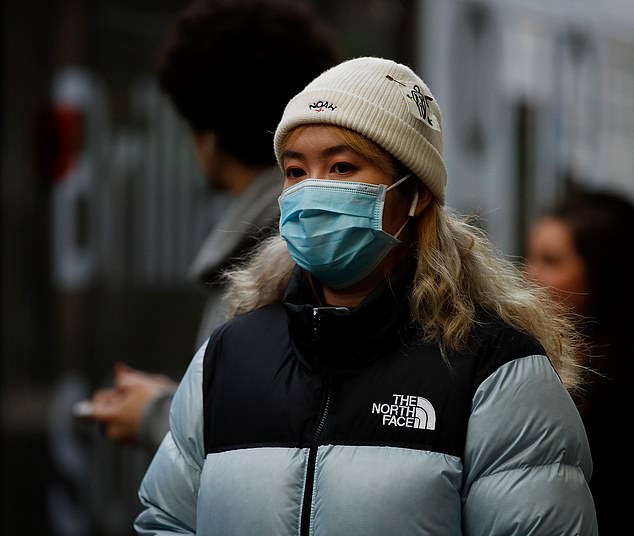 Ms Wong said cold temperatures on Saturday were caused by a thick cloud band over eastern parts of the state, combined with a cold air mass moving in from the south.

‘The cloud band has moved off, but we still have the cold air mass over us which is why it’s still reasonably fresh,’ she said.

With cold temperatures and clear sky to continue over the next few days frost is likely, especially in southern and central inland parts of the state.

‘This is early in the season,’ Ms Wong said.

The cold snap wasn’t just confined to the north with New South Wales, Victoria and South Australia also experiencing a chilly weekend courtesy of cold fronts sweeping over the states.

Most major cities were forecast with maximums of 20C or lower on Sunday, with Australians being warned to brace for continuing cold weather as the week progresses and we head into winter. 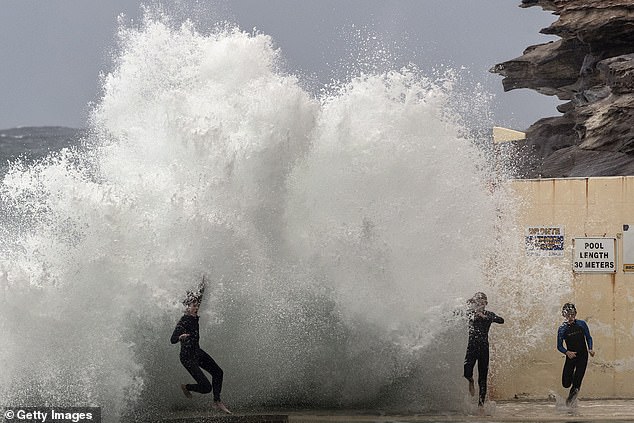 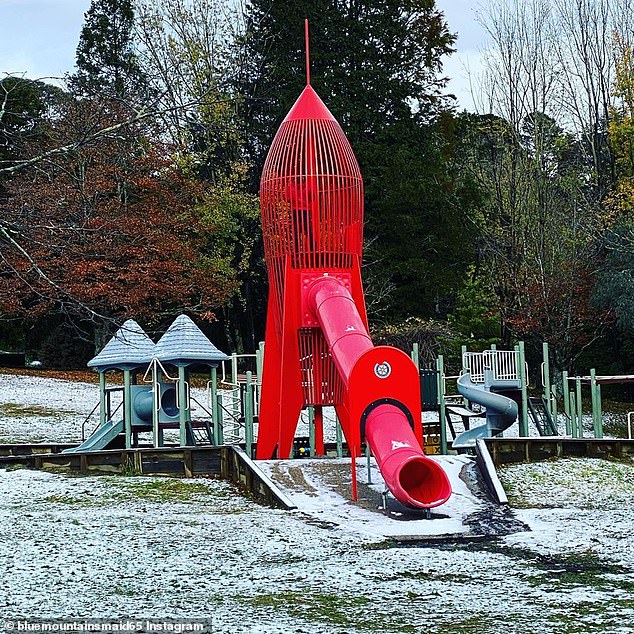 The cold fronts also mean the wet weather will continue with large areas of the country forecast to experience overcast conditions and showers.

In New South Wales the cold fronts brought wind, rain and even snow in some places such as the Blue Mountains and Bathurst.

A severe weather warning was issued over the weekend in Sydney as massive waves battered many of the city’s surfing beaches.

The monster southerly swell pummeled the east coast for a third consecutive day, with dangerous surf conditions stretching from Byron Bay in the north to Eden in the state’s far south.

‘Five metre waves have been observed along Sydney’s coastline, along with some rogue waves in excess of 10 metres, which will create beach erosion,’ Bureau of Meteorology senior forecaster Jordan Notara told Daily Mail Australia. 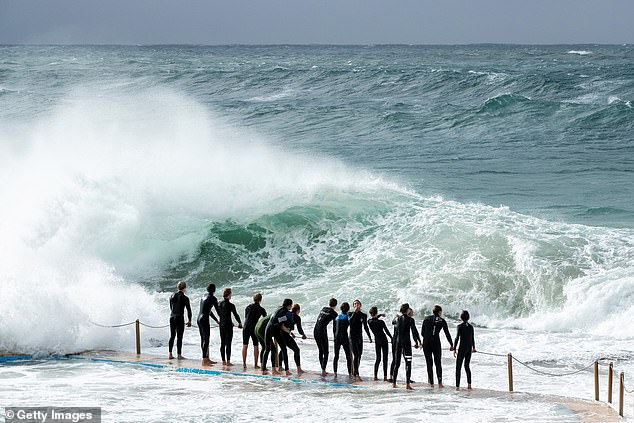 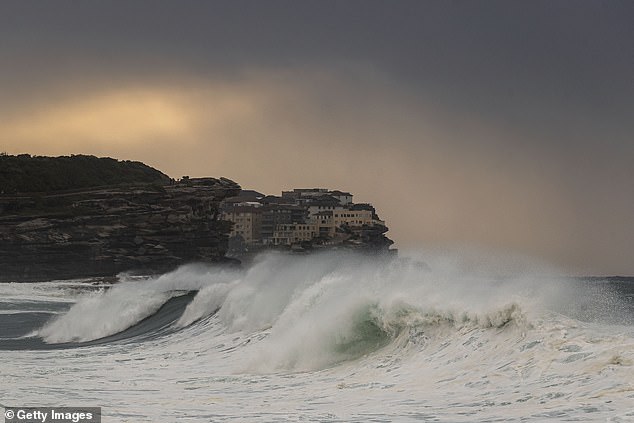 ‘A monster southerly swell up to 4 to 5 metres and strong winds are moving up the coast today, impacting Sydney, Central Coast and Newcastle beaches,’ it tweeted.

‘While tempting to get a look, keep clear rock ledges and check your skill level before entering the water.’

The Bureau of Meteorology warned the hazardous winds and surf conditions will remain along the east coast until at least Tuesday. 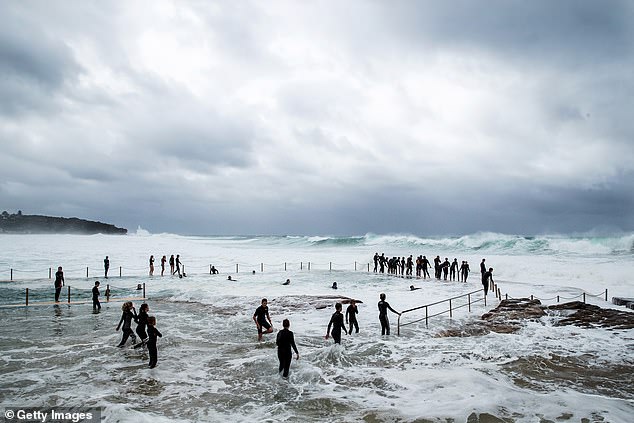 ‘We’re expecting five metres well along the Sydney coastline on Monday morning before dropping down to four metres by the afternoon,’ Mr Notara said.

‘The warning will remain in place for much of the NSW coast until Tuesday.’

Forty shipping containers have been lost overboard off the NSW coast after a ship rolled during heavy seas while travelling from China to Australia.

About 10.45am on Sunday the Australian Maritime Safety Authority was notified that a container ship had lost cargo overboard off the state’s coast.

The Singapore-flagged container ship APL England experienced a temporary loss of propulsion during heavy seas about 73km southeast of Sydney just after 6.10am, AMSA said in a statement on Sunday. 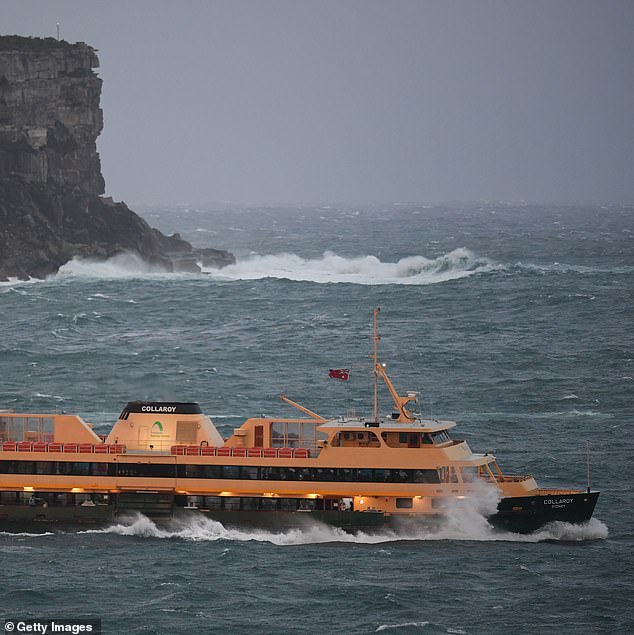 The ship was en route from China to Melbourne.

‘The ship’s power was restored within a few minutes but during this time the ship reported that it was rolling heavily, causing container stacks to collapse and several containers to fall overboard,’ the statement said.

The APL England’s master has reported some 40 containers were lost overboard and 74 were damaged.

AMSA intends to send a challenger jet to the area to look for containers and debris, as well as to inspect the ship for signs of damage or pollution.

‘At this stage it is unknown whether there will be any shoreline impacts associated with this incident and AMSA is working with NSW Maritime to monitor the situation and develop an appropriate response,’ the authority said.