The son of Columbia’s ex-Cali drug cartel kingpin Miguel Rodriguez Orejuela has refuted the way he’s being portrayed in the newest season of Netflix’s Narcos.

In a new interview, William Rodriguez Abadia — Orejuela’s son — claimed that he acted as his father’s lawyer during his legal trouble with the US government and denied that he killed on behalf of his father, as implied in the cartel drama series.

‘I was not an assassin for my father,’ Abadia told El Nuevo Herald, adding that he refused to ‘accept’ the way Narcos makes him out to be ‘a criminal, ruthless assassin and psychopath.’

William Rodriguez Abadia, 53, is unhappy about the way Netflix’s Narcos has fictionalized him as having been his father’s hitman. Abadia says he was the cartel’s lawyer

Rather than being a hitman, Abadia said he was his ‘father’s lawyer,’ during a period of time when the American government was actively engaged in ‘a string of counter-drug proposals’ in Columbia, which included seizing property, extradition and combating money laundering.

Abadia admitted that part of his cartel lawyer duties while in Columbia involved bribing and lobbying politicians, fighting extradition and even administering the cartel between 1995 and 1997.

Despite his best legal efforts, though, the US government ‘won everything’ in the end, Abadia said.

In addition to misrepresenting his cartel duties, the 53-year-old Columbia native — a confessed drug trafficker who served five years in US federal prison and is now on parole in Miami — said that the Netflix series ‘glorifies’ drug trafficking by glamorizing the illicit trade by lionizing drug lords.

‘What’s the difference between Netflix and us,’ Abadia said. 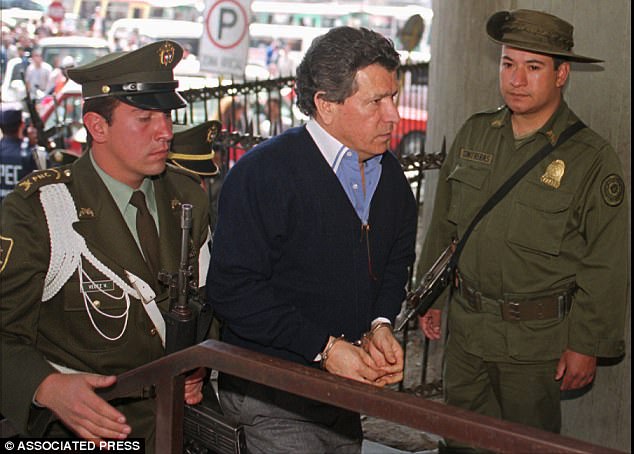 Abadia’s father, Miguel Rodriguez Orejuela (pictured in 1996), was the head of Columbia’s Cali cartel. Season 3 of Netflix’s Narcos focuses on the activities of the Cali cartel

After two seasons of chronicling the life of ‘King of Cocaine’ Pablo Escobar, Season 3 of Narcos, which premiered on September 1, turned to focus on the Cali cartel.

In the show, Abadia is fictionalized and renamed David Rodriguez and played by Arturo Castro, who told Vanity Fair that the character is ‘kind of a psychopath’ and a ‘very hateable person.’

Abadia told El Nuevo Herald that when his lawyer complained about the dramatic liberties the series took with Abadia’s actual cartel role, Netflix responded by saying that Abadia was a public figure and that the series relied on information from court documents when creating the character.

Abadia said that he has found at least 13 inaccuracies in his portrayal in Narcos — which he has enumerated on his website — and that he has contemplated suing Netflix, but can’t afford to take the company on.

The most important thing to him, he claimed, is to ‘clarify all the misunderstandings’ about his role in the cartel and being the kingpin’s son.

Abadia isn’t the only cartel figure or relative to take issue with Netflix and Narcos.

Pablo Escobar’s brother, Roberto, 71, has threatened Netflix with a $1billion suit over intellectual property violations, claiming the series used Pablo’s name and life story without permission, according to The Hollywood Reporter.

Meanwhile, Pablo’s son, Sebastián Marroquín, identified multiple errors within the series, listing out at least 10 of them to the Mirror.

In September, a Narcos location scout was found dead while out taking pictures in a crime-ridden area of central Mexico. His body was found riddled with bullets in his car after an apparent chase through back country roads.