A glamorous grandmother has revealed how she dropped seven dress sizes after becoming so large she had to buy a size 22 swimming costume to go to the pool with her young daughter.

Mum-of-four Natalie Sutherland, Carterton, Oxfordshire, began gaining weight in 2011 after she turned to food for comfort while battling with fertility problems.

Natalie says she would eat up to six packets of crisps a day, guzzle full-fat Coke and devour cream-filled meringues – but her weight soon ballooned to 15 stone 7lbs. 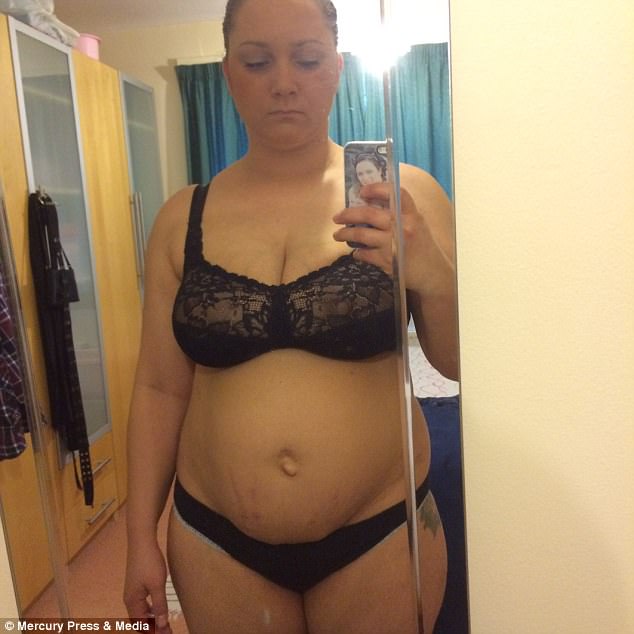 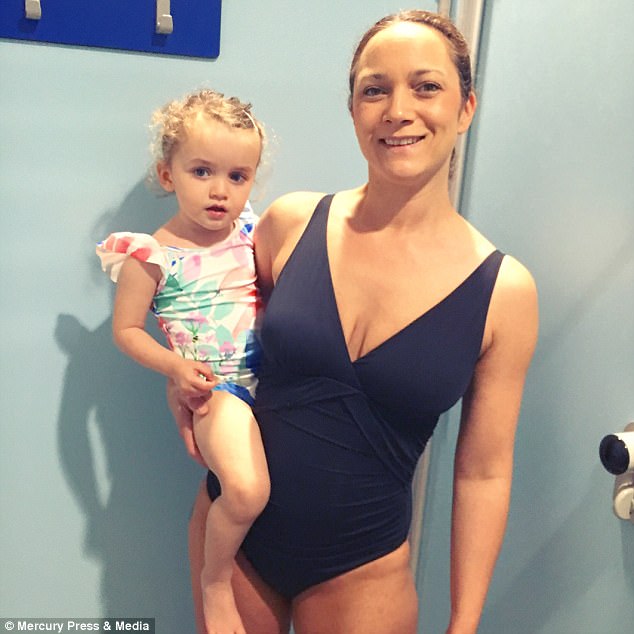 ‘I’ve got a wardrobe full of nice clothes again’: Natalie, pictured with two-year-old Maddison, now wears a size 8 and says she feels confident in her looks after shedding the weight

Despite the joy of falling pregnant with her daughter Maddison, now two, Natalie’s eating spiralled further out of control – leaving her looking like an ‘elephant’.

The expectant mum took advantage of being able to use the excuse that she was ‘eating for two’ and carried on gorging on up to 5,000 calories throughout her pregnancy and beyond.

The full-time mum claims she was so disgusted with how she looked by 2016 that it made her feel sick when she looked in the mirror – and she even struggled to be affectionate with her husband Barry Sutherland, 30.

However, she has now slimmed down to a sleek size eight using her before and after shots in matching outfits to keep her going.

Natalie, from Carterton, Oxfordshire, said: ‘I felt disgusted in myself. I couldn’t look in the mirror without feeling sick. We only had one mirror which says a lot. I felt like I looked like an elephant. 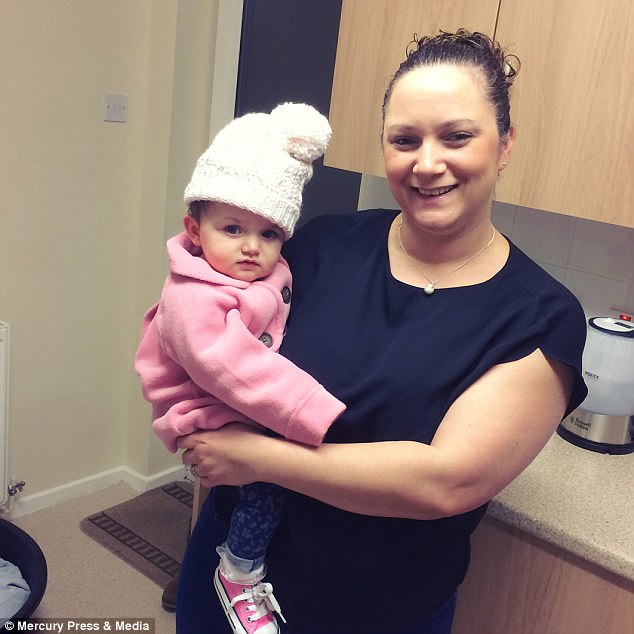 Show me the clothes! With her confidence boosted, Natalie says she now loves shopping and keeps photos of her former frame on the fridge to herself motivated

‘I used to be a photographer so I put the pictures together because they looked good next to each other. I matched the colours and outfits that went together.

‘I did the comparison for myself and to motivate other people. It stops me from going backwards. I printed one off and put it on the fridge to keep me on track.

‘The very first picture I uploaded online was the one of me in my bra and knickers.

FULL-FAT COKE AND CRISPS: WHAT NATALIE ATE BEFORE LOSING WEIGHT

SNACKS – Up to six packets of crisps, cake, meringues with cream

LUNCH – Salad with pasta and salmon or chicken and rice

‘My husband didn’t mind and said I should share what I had done with others and that it’s nothing different to what you see on the beach.

‘He urged me to share them and he shared them too and said, ‘look what she’s done’. He was proud of me.’

Since losing the weight Natalie has finally been able to put her engagement and wedding rings back on which wouldn’t fit whilst she was a size 22.

I used to turn down invitations to go out. I could never find anything to wear because I would be disappointed. The clothes would never look like they did on the hanger.

Natalie said: ‘I was very unhappy with myself.

‘I didn’t want to be touched. It was difficult to get dressed in front of my husband and to show any PDA [public displays of affection].

‘I felt horrible but he’s always supported me. It affected me more than it did him. He would have supported me regardless of what I decided to do.

‘My husband would always say that I still look beautiful but you know when you’re not attractive anymore.

‘It was terrible really. I don’t even know how it got that bad. When I look back I’m just disgusted. I’m still appalled that I got that big. I became an emotional eater but I’m in control now. 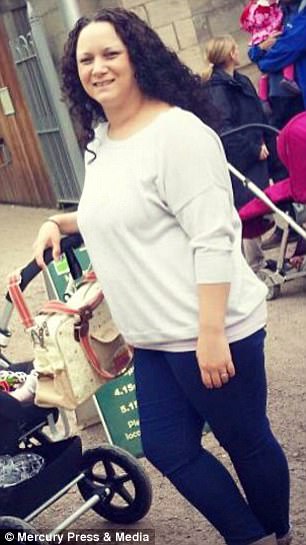 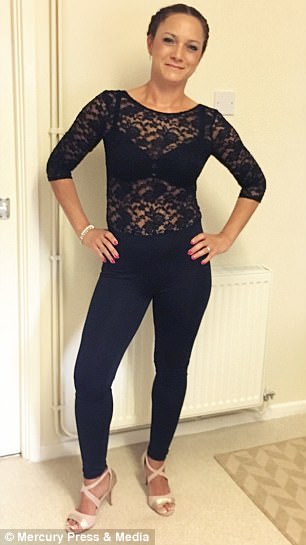 Sweet tooth: Natalie says that she would think nothing of enjoying two cream-filled meringues a day but being forced to buy a size 22 swimming costume was the tipping point for her weight-loss journey 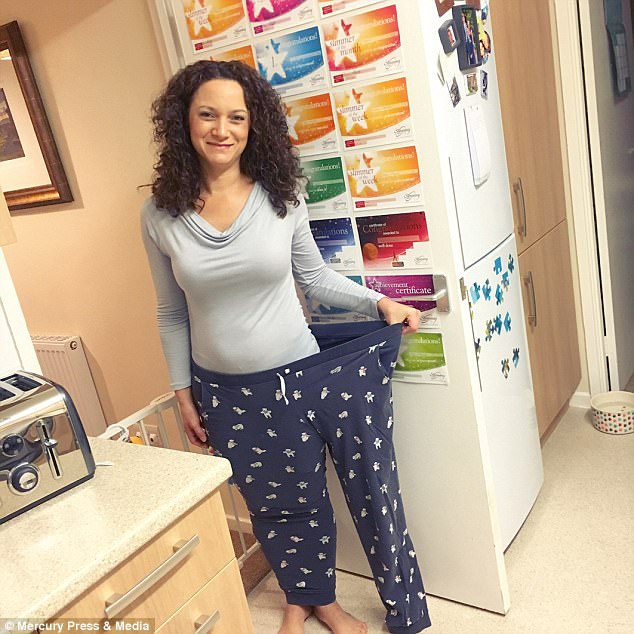 Half the lady she used to be! Natalie says keeping images of her weight loss journey close to hand has kept her focused

‘I used to turn down invitations to go out. I didn’t have a social life. I could never find anything to wear because I would be disappointed. The clothes would never look like they did on the hanger.’

At her biggest Natalie weighed 15st 7lbs after gorging on chocolate, cake, curries and pizza and snacking on up to two cream filled meringues a day.

But when she had to buy a size 22 swimming costume to take her little girl for lessons, Natalie knew it was time to make a change.

Having been too embarrassed by her size to celebrate in the past, Natalie aimed to lose weight for her wedding anniversary in July 2016.

When the big day rolled around, Natalie was able to show off her svelte size 14 figure in a flattering dress.

The mum’s weight loss success only continued and Natalie has now dropped to a lean 9st 12lbs.

Natalie said: ‘We were having lots of problems with fertility so I got depressed. I comfort ate and then I got pregnant and I thought I could get away with eating more.

‘After having the baby, I thought it would be fine to carry on eating like that. I couldn’t go up the stairs without getting out of breath.

It has definitely changed my life. I’ve got a wardrobe full of nice clothes again before I would just wear black…

‘Maddison also had terrible silent reflux that resulted in her feeding up to 16 times a day.

This made me quite hungry most of the time but I reached for all of the wrong foods.

‘I wanted to look nice for our wedding anniversary where we went out for a lovely meal and drinks. I was half way through my weight loss at this point.

‘I was getting compliments from people which really pushed me to keep going.

‘I feel like I’ve found myself again. I do still have the odd day where I think I look a bit fat. I don’t think those insecurities have completely left.

‘It has definitely changed my life. We have just come back from our first family holiday since I lost the weight. I’ve got a wardrobe full of nice clothes again before I would just wear black.

‘I would never have worn these types of clothes before or be photographed in them before. My confidence has massively improved.

‘I couldn’t have done it without my Slimming World consultant Diane Attwell.’