A children’s cartoon showing an angel’s skin colour being changed from white to black as a punishment has sparked fury across social media.

‘Dina and the Prince’, which was posted on India-based YouTube channel My Pingu TV, follows the story of an angel named Dina as she attempts to pursue a relationship with a Prince against the wishes of her community.

As the angel declares her love for him, she is told that her beauty and youth will be removed if she stays with the Prince.

The cartoon begins, showing Dina with white skin, blue eyes and straight brunette hair, before she is unveiled as having darker skin and curly hair.

‘Now I’m ugly’, she cries, as she turns around to reveal her new face to the Prince.

The cartoon has been removed from the YouTube account, which has 700,000 followers, following accusations that it promotes racism, however clips that have been shared on Twitter have gained over 3 million views.

‘This is the most disgusting thing I have seen in a LONG time,’ wrote one Twitter user who shared the cartoon.

‘Dina and the Prince’, which was posted on Indian-based YouTube channel My Pingu TV, follows the story of an angel named Dina as she attempts to pursue a relationship with a Prince against the wishes of her community. The cartoon begins with Dina having white skin, blue eyes and straight brunette hair, pictured 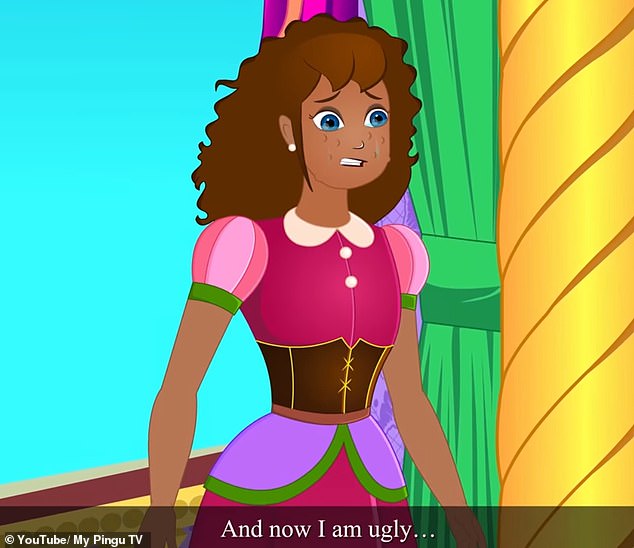 Dina is then unveiled as having darker skin and curly hair, and cries ‘and now I am ugly’, after she is ‘punished’ for continuing contact with the Prince

Arguing that the cartoon would encourage children to grow up believing that darker skin means being ‘ugly and cursed’, thousands of Twitter users slammed the creators and called for the YouTube channel to be deleted.

One person wrote: ‘Conditioning the young ones to understand that black means ugly and cursed is just the height of idiocy and point blank racism’.

Another said: ‘What in the not-so-subtle racism is this? Kids would watch this and go and tease their black friends in school for being ‘ugly”.

A third added: ‘This p****** me off soo much. First I was like **** plot line, then second when I saw that losing her beauty meant her being a fairer skin colour it **** me off so much. I expected to grow old or some ****. They’re really teaching kids to hate so young’ .

Others vented concern that the cartoon could make children with darker skin grow up questioning their beauty.

‘We will still be told racism doesn’t exist just because it isn’t as overt as this… I’m disgusted at the thousands of black kids who have watched this and will question their beauty.

‘Again, allowing black kids to hate themselves because the world has told them to. Sickening,’ wrote one.

Another said: ‘I usually don’t get bothered by s*** on the internet but I feel like this is just wrong. This is messing with the psyche of the mind of a child. Black kids growing up with self hatred and it starts with s*** like this. You expect that shows directed towards kids would be safe…’

A third added: ‘And that’s the crux of the matter, targeting black children with content that is meant to teach self hate. I remember my boss told me she told her (white) kid that brown people stick with brown and whites stick with whites. Videos like this justify her reasoning’.