The priceless artefact was found during the annual excavations at the Roman fort of Vindolanda near the famous wall in Northumberland.

The complete stone, measuring 6.2 by 12.4 inches (160mm by 315mm), would have originally been fitted into a recess at Vindolanda.

The mysterious male figure is depicted holding a spear and is stood in front of a horse or donkey – but experts aren’t sure which real-life figure it depicts, if any.

Hadrian’s Wall was built by the Roman army on the orders of the emperor Hadrian after his visit to Britain in AD 122.

Although first built by the Roman army before Hadrian’s Wall, Vindolanda became the wall’s construction and garrison base.

Vindolanda Charitable Trust, which oversees archaeological, conservation and education work at the site, says it has had ‘no comparable discoveries’ before now.

The stone was uncovered on May 20 this year, only inches under the topsoil, by two volunteers from Newcastle.

Richie Milor and David Goldwater had been assigned to uncover a flagged floor inside a 4th century building of the ancient fort.

‘We are just absolutely elated, very proud to be part of this discovery, it was actually very emotional,’ Milor said. 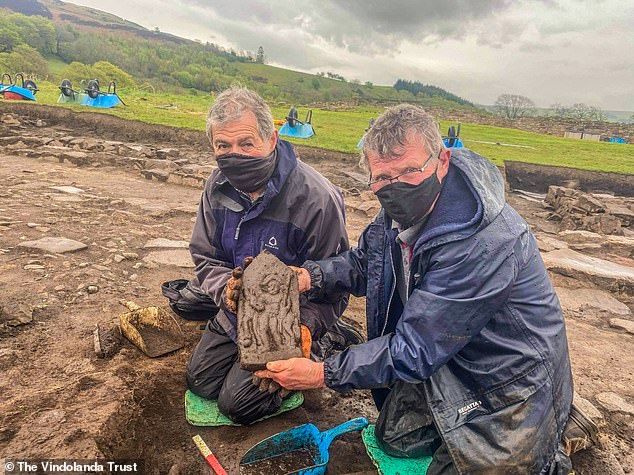 Richie Milor and David Goldwater with their discovery, which will be on public display from July 1 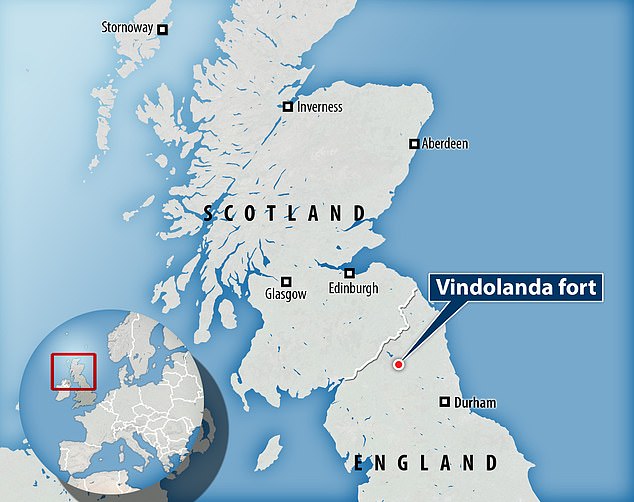 Hadrian’s Wall was the north-west frontier of the Roman empire for nearly 300 years. Although first built by the Roman army before Hadrian’s Wall, Vindolanda became the wall’s construction and garrison base

‘Whether you find something or not we love coming to this site, playing our small part in the research that takes place, but finding this made it a very special day indeed.’

Site archaeologist Marta Alberti, one of the team overseeing the excavations at Vindolanda, is now piecing together all the clues to try and establish who the carving may represent.

Unfortunately, the stone has no inscription that may have revealed his identity – although one possibility is it depicts some kind of deity.

‘The nakedness of the man means he is probably a god, rather than a mere cavalryman,’ Alberti said. 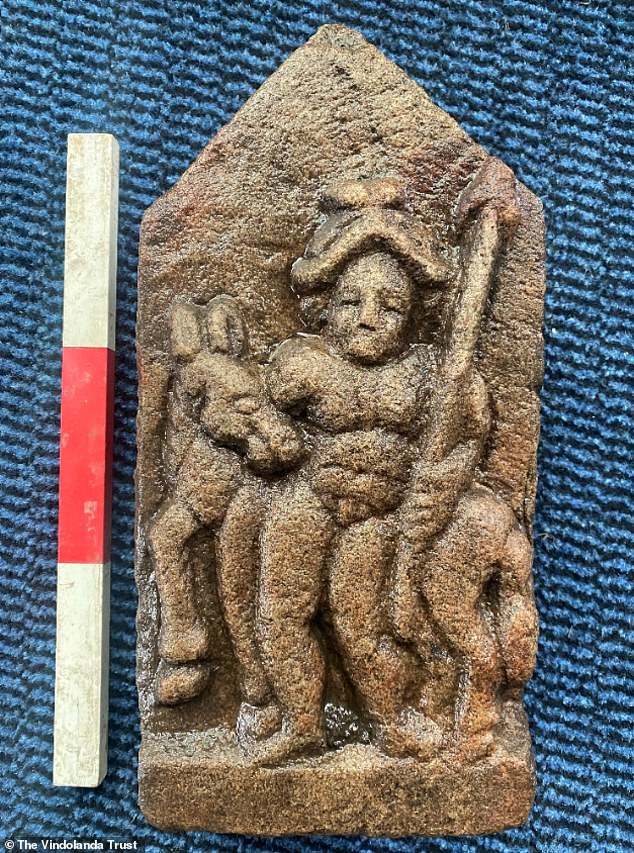 The stone measures 6.2 by 12.4 inches. Excavations at Vindolanda will continue until September 24 this year

The figure is also carrying a spear in his left arm, ‘a common attribute’ of Mars, the god of war in ancient Roman myth.

At the top of the figure’s head there is also two almost circular features, that, according to Alberti, could be identified as wings. This may be a reference to Mercury, the god of travel.

‘Horses and donkeys are also often associated with Mercury as a protector of travellers,’ Alberti said.

Additionally, the stone floor where it was found was very close to that of a large 4th century cavalry barrack.

The units residing in the part of the fort may have had their own interpretation of Mars or Mercury, or a third and so far unidentified version of the god merging the qualities of both.

The artefact will be going on public display in the current finds exhibition at the Vindolanda museum from July 1 for the remainder of the 2021 season.

Excavations at Vindolanda will continue until September 24 this year.

WHAT IS HADRIAN’S WALL?

Permanent conquest of Britain began in AD 43. By about AD 100 the northernmost army units in Britain lay along the Tyne–Solway isthmus.

The forts here were linked by a road, now known as the Stanegate, between Corbridge and Carlisle.

Hadrian came to Britain in AD 122 and, according to a biography written 200 years later, ‘put many things to right and was the first to build a wall 80 miles long from sea to sea to separate the barbarians from the Romans’.

Hadrian’s Wall became the north-west frontier of the Roman empire and crossed northern Britain from Wallsend on the River Tyne in the east to Bowness-on-Solway in the west.

Built by a force of 15,000 men in under six years, it’s comprised of Milecastles, barracks, ramparts and forts.

Among these are the forts of Banna, now known as Birdoswald, the town of Corbridge and the auxiliary fort of Vindolanda, to the south of the wall.

Hadrian’s Wall resisted all comers in its day and defended an empire that stretched from Britain in the west to Jordan in the east.

Although mainly built by legionaries, the Wall was manned by auxiliaries. They were organised into regiments nominally either 500 or 1,000 strong and either infantry or cavalry or both.

The 500-strong mixed infantry and cavalry unit was the workhorse of the frontier. Each fort on the Wall appears to have been built to hold a single auxiliary unit.

Hadrian’s Wall was made a World Heritage Site in 1987.