Carwow raises $55m to grow its Sell Your Car service

Car dealing website Carwow has secured about $55million (£42million) of new investment for its used car marketplace as it looks to take on rival Motorway.co.uk.

The company has said it will use the cash to grow its new Sell Your Car division, which has seen business boom since its launch earlier this year.

Sell Your Car allows consumers to list their car by posting photos and details, and inviting dealers to bid and buy it directly from them, with all offers including the collection costs.

Deal: Carwow’s Sell Your Car has helped sell £200m worth of cars so far

It has seen revenues grow by 600 per cent since it was created after the acquisition of Wizzle in June, having helped sell £200million worth of cars so far.

Chief executive James Hind, who founded Carwow in 2010 when he was just 23, said the new investment will help ‘supercharge’ Sell Your Car, for which he has global aspirations.

‘We’re incredibly pleased with how quickly our users and trade buyers have taken to Sell Your Car, proving the value of a unified, digital selling and buying experience,’ he said.

In the three months to September, Sell Your Car hit its first target of 7,000 live listings, with an average of 900 cars listed on the platform each day, the company said.

‘All this has been achieved so rapidly by just leveraging what already exists within carwow… We now plan to use part of the additional funding to advertise Sell Your Car to all car owners,’ he added

‘With great results and learnings in the UK, we’ve begun testing in Germany. Ultimately our aims are global – just like the rest of the carwow business.’ 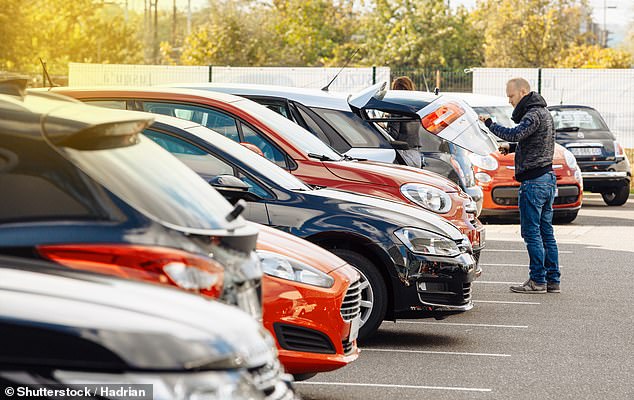 Sell Your Car competes with Motorway, which only last week secured ‘unicorn’ status – which refers to new tech companies valued at over $1bn

Unicorns are new tech companies valued at over $1billion.

London-based Motorway saw its valuation rise above that threshold after securing new funding worth $190million from existing and new investors.

Motorway’s model, which Sell Your Car is based on, helps customers sell their car to dealers for free (it’s the dealers who pay a fee) ‘in as little as 24 hours’.

Used-car websites are benefiting from a semiconductor shortage that is continuing to limit new car production and pushing demand for second-hand vehicles soaring, with prices continuing to move upwards. 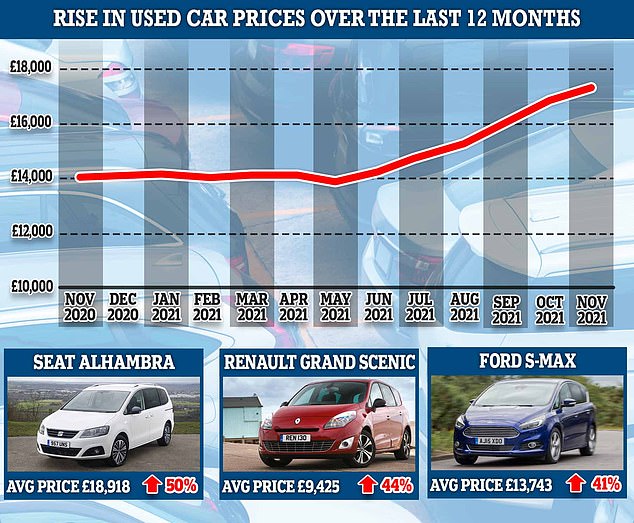 Used car prices soar: The average second-hand model has costs £17,366 – some £3,862 more than a year ago. Large seven-seat MPV models, including the Seat Alhambra, Renault Grand Scenic and Ford S-Max have experienced the biggest value increases

The surge puts Motorway on track to deliver over $2billion in completed sales over the next year, the company said.

Over 100,000 used cars have been sold on Motorway since its launch in 2017, with a network of 4,000 car dealers using the platform to directly bid on used vehicles.

Motorway says it is now selling over 8,000 cars a month, with a new sale being agreed every five minutes.

The fresh funding by Index Ventures – who have backed the likes of Deliveroo and Etsy – and Silicon Valley tech investor Iconiq Growth, among others, will help the company ‘scale even faster’, according to Leathes.

Motorway previously raised $67.7million, with the latest investment brining total funds raised to $273million since it was founded by serial entrepreneurs Tom Leathes, Harry Jones and Alex Buttle in 2017.

With offices in London and Brighton, Motorway employs 250 people, more than half of whom are in the technology, design or product development teams.

Carwow, which initially started life as a reviews aggregator, employs over 350 people in the UK, Germany and Spain, where it is a leading seller of new cars.

The latest investment follows a year of strong performance across the Carwow business, which saw revenues increase 60 per cent year-on-year, despite the challenges faced in the new car market.

‘Whilst the focus of this investment is on Sell Your Car, our rapidly growing team also delivered a record year for our new car business,’ said Hind.

‘We’ve led the market on the switch to electric vehicles, with over 30 per cent of sales now pure electric, and captured huge consumer demand for finding the best route for getting a new car and selling an old one.’