Cases of ‘broken heart syndrome’ are more than four times higher during the coronavirus pandemic as stress levels soar, a study has found.

Doctors in Cleveland, Ohio, reported that the condition, stress cardiomyopathy, has grown more prevalent since March in patients presenting with heart symptoms.

Symptoms of the stress-driven syndrome can resemble a heart attack — with chest pains and a shortness of breath, but without acutely blocked coronary arteries.

Other signs of the condition include an enlarged left ventricle, an irregular heartbeat, low blood pressure and fainting.

In some cases, it may lead to cardiogenic shock — an often-fatal condition in which the heart is unable to pump enough blood to meet the body’s needs.

Cases of ‘broken heart syndrome’ are more than four times higher amid COVID-19 as stress levels soar, a study has found. Pictured, symptoms can resemble a heart attack

In a separate study, researchers from Baltimore presented the case of a 52-year-old male COVID-19 patient from a nursing home who was diagnosed with stress cardiomyopathy.

The man — who had recently tested positive for SARS-CoV-2 — presented with a shortness of breath and rapid breathing, fever and hypoxia.

Treatment was successful and led to the man’s discharge from the clinic.

The team propose that here — unlike in the Cleveland Clinic examples — the viral infection led directly to the stress cardiomyopathy, likely via an excessive immune response which experts refer to as a ‘cytokine storm’.

The full case report was published in the journal BMJ Case Reports. 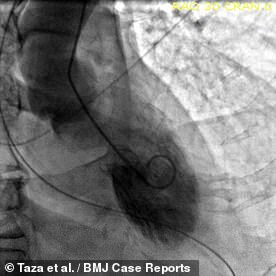 Pictured, the patient’s left ventricle with the apical ballooning of stress cardiomyopathy

‘The COVID-19 pandemic has brought about multiple levels of stress in people’s lives across the country and world,’ said cardiologist Ankur Kalra of the Cleveland Clinic.

‘People are not only worried about themselves or their families becoming ill — they are dealing with economic and emotional issues, societal problems and potential loneliness and isolation.’

‘The stress can have physical effects on our bodies and our hearts, as evidenced by the increasing diagnoses of stress cardiomyopathy we are experiencing.’

While the causes of stress cardiomyopathy are not fully understood, experts believe that physical and emotional stress can release hormones that temporarily lower the heart’s ability to pump, causing it to develop an irregular rhythm.

The condition is also referred to as Takotsubo cardiomyopathy, in reference to the Japanese expression for a ‘fishing pot for trapping octopus’ — which is what the weakened left ventricle of the heart can resemble in sufferers of the condition.

In their study, Dr Kalra and colleagues examined 258 patients who presented at either the Cleveland Clinic or Akron General with a set of heart symptoms referred to as acute coronary syndrome in either March or April this year.

Symptoms of acute coronary syndrome include chest pain, tightness in the chest and left side of the body, sweating, nausea, vomiting and shortness of breath.

The researchers compared the patients attending during the pandemic with four control groups of individuals with the same condition from before COVID-19.

They found that the incidence of stress cardiomyopathy among the patients with acute coronary syndrome had increased from around 1.7 per cent to 7.8 per cent.

In addition, individuals diagnosed with ‘broken heart syndrome’ were seen to typically end up staying in hospital longer amid the pandemic than those before the outbreak of the novel coronavirus — even though none tested positive for COVID-19.

There was, however, no difference in the rate of mortality of the patients before and after the pandemic began. 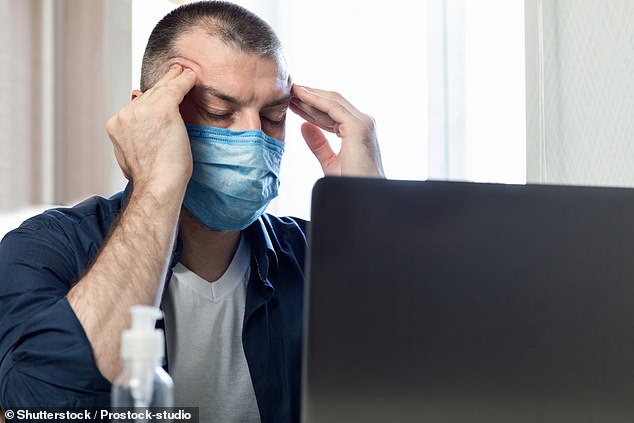 ‘The COVID-19 pandemic has brought about multiple levels of stress in people’s lives across the country and world,’ said cardiologist Ankur Kalra of the Cleveland Clinic. ‘People are not only worried about themselves or their families becoming ill — they are dealing with economic and emotional issues, societal problems and potential loneliness and isolation’

‘While the pandemic continues to evolve, self-care during this difficult time is critical to our heart health — and our overall health,’ said paper author and Cleveland Clinic cardiologist Grant Reed.

‘For those who feel overwhelmed by stress, it’s important to reach out to your healthcare provider,’ he continued.

‘Exercise, meditation and connecting with family and friends — while maintaining physical distance and safety measures — can also help relieve anxiety.’

The full findings of the study were published in the journal JAMA Network Open.

Although it’s best known as ‘broken heart syndrome,’ the condition also has another two names: Stress cardiomyopathy and Takotsubo syndrome.

The latter name comes from the shape the heart takes during an episode of ‘heartbreak.’

The left pumping chamber of the heart stretches outward like a balloon, while the base of the muscle inverts, pulling inward.

The combined effect renders the heart too weak to pump blood properly.

And, according to the Japanese scientists that first discovered the phenomenon, the contorted heart resembles a ‘Takotsubo,’ an octopus-catching pot.

The sudden heart syndrome causes symptoms similar to those of a heart attack, like chest pain and shortness of breathe.

But it tends to happen after shocks, like physical injury or infection or the news of a loved one’s death.

Scientists think that a sudden influx of stress hormones like adrenaline and cortisol cause the heart to go haywire.

The condition strikes over one million in the US a year, and is life-threatening.