Ray Parlour believes Arsenal must ‘take a gamble’ if they are to challenge for the Champions League places next season — but the club’s financial turmoil means it won’t be quite so simple for Mikel Arteta.

Gunners boss Arteta looks likely to have to make do with loans and free transfers this summer with the club facing huge losses in the wake of the coronavirus crisis alongside the issue of having star players like Mesut Ozil on huge wages and being unable to get rid of them.

Arteta’s task to rebuild Arsenal into a top-four club again looks a gargantuan job with the club ninth in the Premier League table and battling even to qualify for the Europa League let alone the Champions League.

While rivals Chelsea have already spent big on Timo Werner and Hakim Ziyech, Arsenal have handed a contract extension to David Luiz and a four-year deal to Cedric Soares who is yet to play a game for the club.

‘Arsenal have got to look bigger, there’s no doubting that,’ said Parlour, who won three Premier League titles with the club.

‘You might have to spend a little bit more money, you might have to take a bit more of a gamble as a club. But if you get into the Champions League then you can cement your place there by attracting and having bigger players in the squad. Arteta’s done all right so far but now it’s up to the club to back him.’ 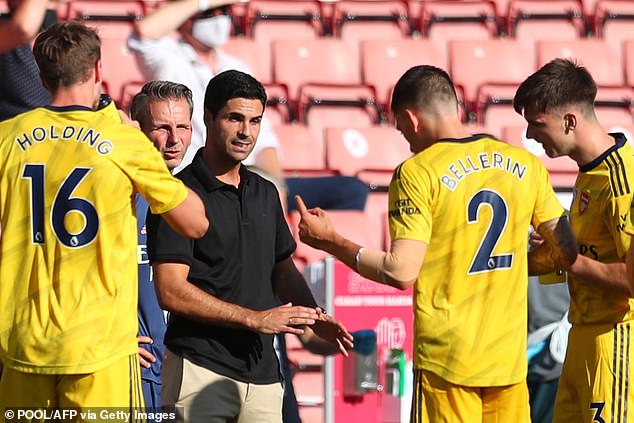 The problem is the club do not have the means to do so. Arsenal posted losses of £27.1million in their most recent accounts while analysis from their supporters’ trust has forecast losses of £144m next season if the campaign is played behind closed doors, though The Mail on Sunday understands that some fans are likely to be able to attend.

Arsenal make around £100m a year from their gate receipts. They received £34m for reaching the Europa League final last season so failure even to qualify would hit them even harder.

Arteta’s balancing act is a difficult one. Parlour calls it a ‘juggling act’. Leading scorer Pierre-Emerick Aubameyang is yet to sign a new contract, which leaves Arteta with the choice of selling his best striker to free up funds or allow Arsenal again to run down a player’s contract and let them leave on a free.

‘The owners have got to take a bit of a gamble, that’s what it comes down to sometimes,’ said Parlour. ‘Try and entice a few players in. They have to try to keep Aubameyang if they can, Sako is close to being out of contract as well and they need to get rid of a few. Man City and Liverpool are on another level.

‘Then you’ve got Manchester United, they will buy players in the summer. Frank Lampard you’ve seen already the owner really trusts him, they have got two excellent players in Werner and Ziyech. Leicester — will they go out on strengthen? Probably.

‘Before you know it Wolves will say, “Right we’re going to have a gamble we are going to try and get Champions League football”.

‘The more years you are not in it, the harder it is to get back into it. So they’ve got to be careful because you can quickly slip down in that league.’

Arteta knows how big the job is. He watched as Liverpool were crowned champions, reaping the rewards of building under Jurgen Klopp since 2015.

‘The league table shows how far away we are at the moment,’ said Arteta. ‘To compare with them is not the right thing to do. Or try to cut and paste, emulate something like this. It doesn’t work.

‘We have to do what we believe is the right thing to do.

‘The context is completely different to what they had at that time. We have to adapt our context, our situation, the players and the environment we have and then we have to start making some decisions. I think if we are a little bit patient, we will see some big changes.’