By Charlie Coë and Michael Pickering For Daily Mail Australia

A pet dog has miraculously escaped from the jaws of a two-metre crocodile after the predator struck as he went on a walk with his owner at a popular beach.

Banjo, a Staffordshire Bull Terrier, fought off the saltwater crocodile at Casuarina Beach near Dripstone Cliffs in Darwin on Monday morning.

The crocodile bit the five-year-old terrier on his back – leaving the dog with three deep lacerations – before fleeing.

Banjo’s owner Tom Cummins said he only realised his pet was being attacked when he heard a yelp and looked back to see the dog in the crocodile’s jaws.

‘The water was about knee-deep and I heard a bit of a yelp. I looked towards the water and the crocodile had him in its mouth,’ Mr Collins told 9News.

‘He’ll be able to show [the scars] to his girlfriend and say ‘look I’m a hero’.’

Mr Collins took the dog to the vet but was told the wounds did not require stitches and were ‘cosmetic’, ABC News reported.

Northern Territory Parks and Wildlife staff have yet to track down the crocodile despite setting up traps in the coastal reserve next to the beach.

Banjo’s owner said the Staffie was clearly unnerved by the near-miss and went for another swim in a creek later in the day. 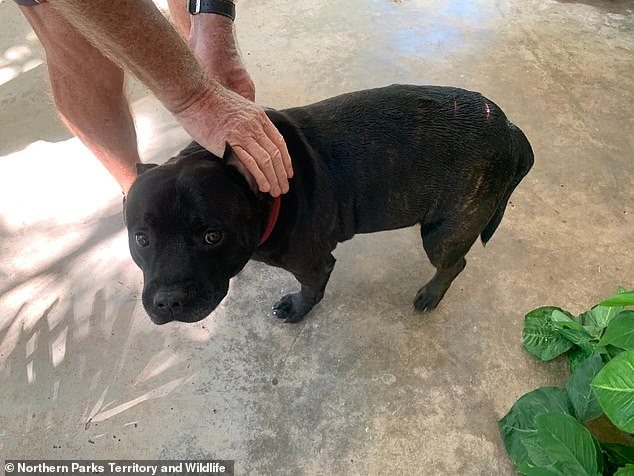 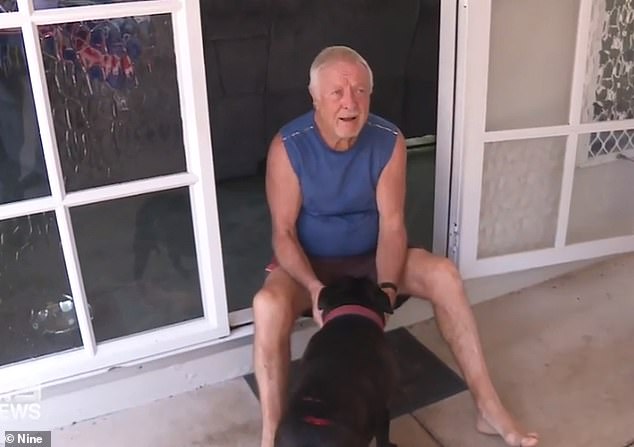 The attack was shared by the Northern Territory Parks and Wildlife service on Monday with a warning about the dangers posed by crocodiles in the state’s waterways.

‘He managed to escape with some deep lacerations and a fresh appreciation of why we must ALWAYS Be Crocwise around any body of water in the Top End,’ the post said.

Crocodiles are commonly found in the NT’s creeks and waterways and are known to eat animals as big as cows, buffaloes, wild boar.