Cat Deeley has confessed she’s ‘a little nervous’ about standing in for Lorraine Kelly on her ITV show over the Easter break, as she marks her big return to UK TV.

The presenter, 43, who was based in the US for 14 years before recently returning to England, made an appearance on Lorraine on Thursday, ahead of hosting the show.

She said: ‘I hope I’m half as good as you Lorraine. I’m a little bit terrified I haven’t even been properly dressed from the waist done since God knows when!’

Terrified: Cat Deeley has confessed she’s ‘a little nervous’ about standing in for Lorraine Kelly on her ITV show over the Easter break, as she marks her big return to UK TV

After welcoming Cat onto the show, veteran broadcaster Lorraine told her: ‘I’m so glad you can do this! I think, obviously, you’ll be brilliant.’

Later in the show, Lorraine revealed that all Cat has requested for her guest-hosting gig is bananas and coffee, with Cat confirming: ‘Those are my morning staples – really good, strong coffee and a ‘nana!’

Cat will fill in for the veteran broadcaster for five shows next week, and gushed she was looking forward to reuniting with some ‘old friends’ on the chat show. 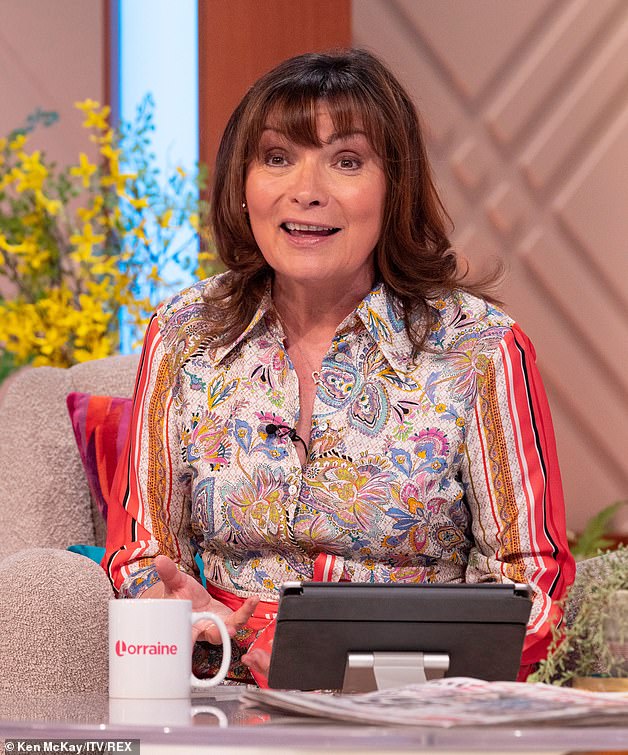 Departure: The presenter will fill in for veteran broadcaster Lorraine Kelly (pictured) for five shows next week and gushed she was looking forward to reuniting with some ‘old friends’

She said in a statement: ‘Lorraine has kindly entrusted me with her show while she has a break over Easter.

‘I’m so happy to be back at ITV for the coming week and looking forward to meeting some people I’ve wanted to interview for sometime and also welcoming some old friends on air.’

It comes after Cat returned to British screens earlier this year by reuniting with her SMTV co-hosts Ant McPartlin and Declan Donnelly for a hilarious revival of their iconic sketch Chums.

And during her appearance on ITV’s Lorraine on Thursday, Cat spoke about reuniting with the presenting duo, as she also disclosed her stipulations.

She recalled: ‘I always said to them, don’t try and trick me with makeup and prosthetics because I will know you. They kept me completely in the dark. 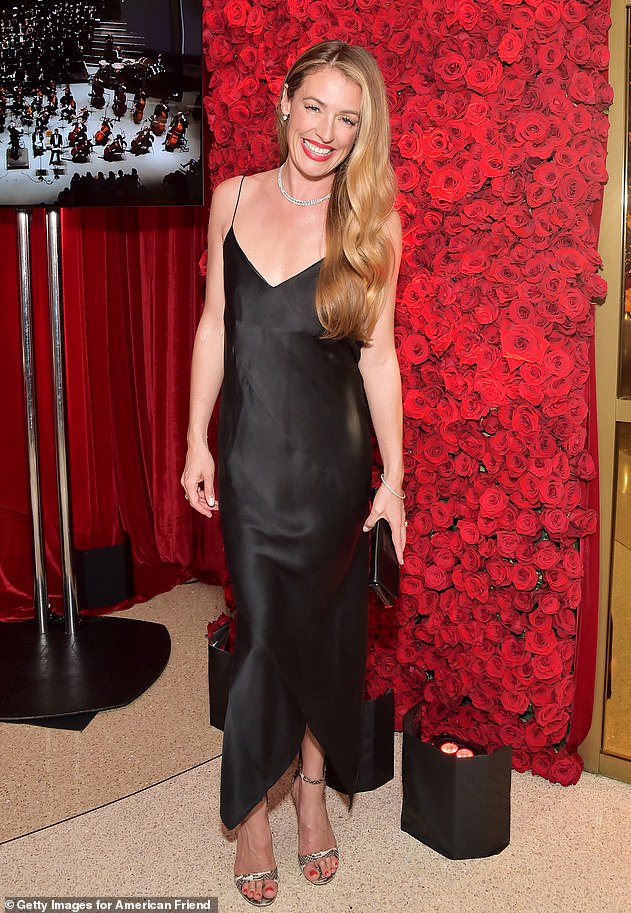 US sucess: During her time in the US, Cat hosted popular TV show So You Think You Can Dance from the second season, presenting every episode from 2006 onwards

‘Declan was above so I never saw him and Ant wore that giant costume which they told me was the work experience guy. If I had known it was Ant in that outfit, I would have just let the fire burn.’

Reminiscing about their days on SMTV, she said: ‘We always say it was the best time of our lives and we didn’t really know it at the time. I try and tell my boys now.

‘Milo, my oldest one, woke up and called out for me and said, “Mum you know your brothers, why did they do that to you?” First, they’re not my brothers! I said to them, when you have to start paying for his therapy later in life…

‘It got to a stage where we were all so comfortable with each other. We ended up doing things to trip each other up. I remember sticking notes in things. We were just having so much fun.’ 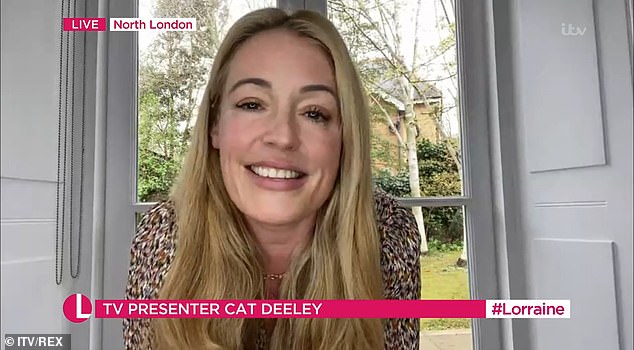 Travel: Cat also discussed the possibility of commuting to the US for weeks at a time for work

During her time in the US, Cat hosted popular TV show So You Think You Can Dance from the second season, presenting every episode from 2006 onward.

However, the COVID-19 pandemic abruptly thwarted plans for the show’s return to screens last year and this year, with the Fox series now sitting in limbo.

Discussing the logistics, Cat told Lorraine: ‘There’s just no way of us making that show. It’s just not possible. We need to get people from all over the country and they need to be able to dance together. 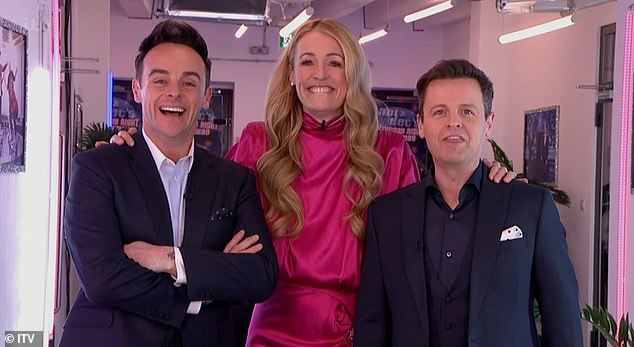 Back together! It comes after Cat returned to British screens earlier this year by reuniting with her SMTV co-hosts Ant McPartlin and Declan Donnelly on Saturday Night Takeaway

‘We can be based here and the boys can go to school and see their friends and family and if I need to pop back for two weeks and then come back I can do that.’

Cat will present Lorraine from next week beginning April 5, with Ranvir Singh set to present the following week from April 12.

Lorraine editor Victoria Kennedy added: ‘Next week the lovely Cat Deeley will take to the helm of Lorraine, providing viewers at home with much-needed Easter enjoyment. 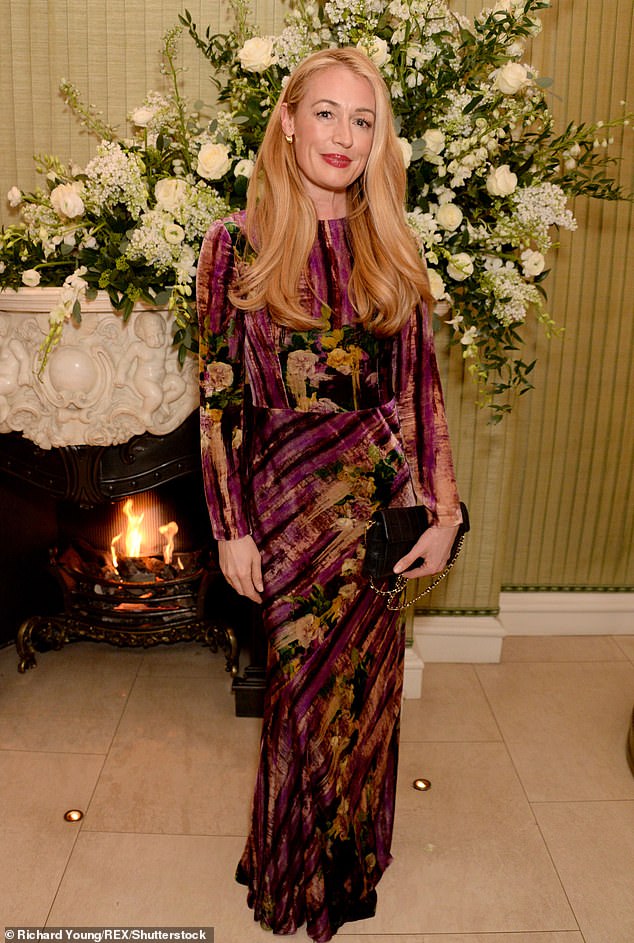 Back home: After living in the United States for many years, Cat returned to the UK last year with her husband Patrick Kielty so they could live closer to her British family

‘As a huge fan of SMTV, I’m more than just a bit delighted. And of course we look forward to welcoming Ranvir back too. We’ve got a great lineup of Easter guests joining us.’

Cat lived happily in Los Angeles with her husband Patrick Kielty for over 14 years. However they put their Beverly Hills mansion on the market for $4.9 million (£3.8 million), in August last year.

The couple now reside in a north London property together with their sons Milo, five, and James two, so that they can live closer to their British family.

A source told The Sun: ‘Cat was discussing putting the house up for sale months ago, they didn’t want to rent it out because they were considering buying a property in the UK. This is more of a permanent move.

‘She is a household name, and they both made it work in LA, but Patrick gets a lot more work back home, and she could always fly back and forth when the pandemic eases up.’

The insider added that both Cat and Patrick were ‘more than ready for this’ as they dream of raising their children in the UK.

Last month Cat delighted fans when she reunited with Ant and Dec for a reprisal of their iconic SMTV Chums sketch on Saturday Night Takeaway.

Later in the show, Cat was hilariously duped by her pals as she unwittingly appeared in their undercover segment.

Lorraine weekdays from 9am on ITV and catch up on the ITV Hub.

Pals: The trio revived their iconic Chums sketch with a star-studded cast, leaving fans thrilled with the trip down memory lane