A cat was lucky to survive a machete attack that left her with a gaping head wound and gave vets no other option but to remove her left eye.

The cat, named Titou, was found by a good Samaritan in Buiram, Thailand, after managing to escape her attackers, who had possibly targeted her for meat.

She was taken to the Blue Dream Shelter, the home of the Sounds of Animals charity, where staff rallied round to get Titou the urgent care she needed after the attack had left her with a huge open wound, exposing her eye, nose, jaw and part of her brain.

The cat has now made an amazing recovery, despite losing her eye, and has been adopted by a loving family in the area.

Michael Chour, the charity’s founder, said: ‘This cat’s injuries were horrific, and we knew that she needed urgent veterinary care in order to save her life.

‘It was apparent she would need urgent intensive care to survive. She was in a deplorable state.

‘The machete had cut through her skull, her brain, the eye, the nose, and the jaw.

‘We drove her nearly 19 miles to the nearest vet where she was assessed at the clinic and was immediately prepped for surgery. 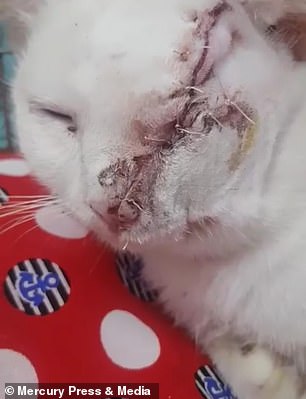 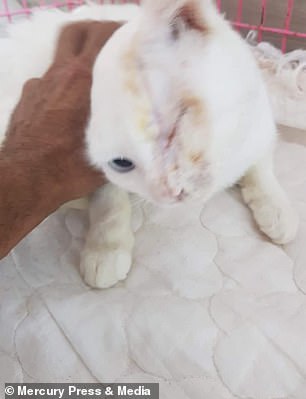 ‘She underwent reconstructive surgery to salvage her breathing passages and repair to her mouth but unfortunately the eye had to be removed.’

Titou remained under close watch as she came round from her extensive surgery before she was slowly able to eat and drink for herself, as well as receiving antibiotics, pain relief and IV fluids.

48-year-old Michael, who gave up his job as a doctor in France to open the charity, travelled to the clinic everyday to check on Titou’s progress, before she returned to the shelter.

Michael, 48, said: ‘Miraculously the surgery was a success, and she remained under close watch at the veterinary clinic, whilst receiving all the care required.

‘I made the journey to the veterinary clinic daily to check on Titou’s progress.

‘Within a couple of days she was able to eat and drink, her spirit was bright, considering what she had endured.

‘The stitches were removed after 10 days and she remained under the veterinarian’s care for some time, before I could take her back to the shelter.’ 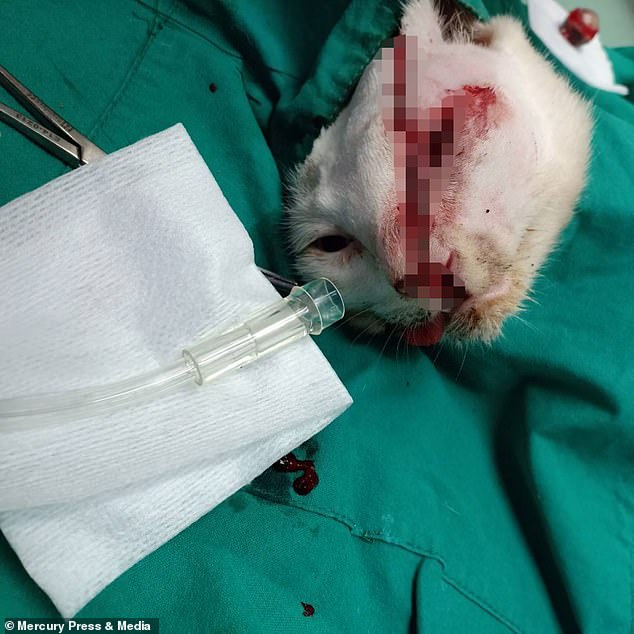 A good Samaritan took her to the Blue Dream Shelter, the home of the Sounds of Animals charity, who then brought her to the vet for emergency surgery

The cat has now been adopted by a loving family and is being kept safe from further attacks that are all too common in the area.

Michael said: ‘Titou would have definitely died from her injuries, had she not been rescued.

‘It is terrible to think that human beings were capable of harming her in such a vicious manner, but also heartwarming that there were kind, compassionate people to help her.

‘She has now been adopted by a loving family, and hopefully is safe from machete wielding monsters.

‘Animals are frequently hatcheted here, It is a very rural area.

‘Thailand made the dog meat trade illegal seven years ago, but this law is very difficult to enforce, people regularly try to kill dogs and cats for food, as it is very unlikely they will be caught.

‘Thai law says you have to have proof, which is unlikely to ever happen especially in this very rural area.’