Cat rescued after spending an hour stuck in an engine bay

A pet cat was rescued unscathed by a fire crew after being driven around for an hour trapped inside the engine of its owner’s car.

Dr Dominic Pimenta, a junior doctor in London, had parked outside a supermarket after dropping his wife at work, when he heard a mewing sound.

At first he thought he may have run over and injured someone else’s pet as his frantically searched under wheels of his motor. 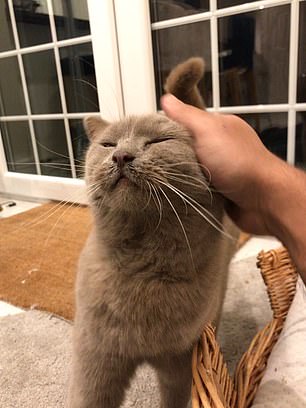 This is the moment Dr Dominic Pimenta spotted his cat, Max, stuck in the engine bay of his car, left. Luckily, the cat, right, was rescued uninjured by the London Fire Brigade

He then heard another ‘meow’, realised the sound was coming from inside his engine, popped open the bonnet and found his moggy Max wedged deep inside and unable to move.

Max was finally rescued after an embarrassed Dr Pimenta dialled 999 for help. It took five firemen to finally squeeze the cat of his hiding place after dismantling part of the engine.

London based Dr Pimenta, 31, recounted his story in a series of tweets on Monday night .

‘A pretty strange thing happened to me tonight, and in this dark #Brexit time, it might benefit Twitter to hear it,’ he wrote

‘So I drove my wife to her night shift tonight (about thirty minutes each way). On the way back, I stop at ASDA to get milk for my daughter. As I’m stepping out into the car park I swear I can hear a ‘meow’.

‘Seriously? I’m about to head off when I hear it again.

‘Meow’. Now I have a cat so I’m concerned there’s one around somewhere.

‘I look under the car, around the wheels, God have I run it over?!

‘And then another, “meow”. I think it’s coming from MY car.

‘So, slightly madly, I try to have a look into the engine. Pop the bonnet and shine a light down.

‘He’s meowing and looking up. He doesn’t seem injured. I can’t reach him. I try to get under the car- can’t see him.

‘I’ve just driven for an hour- he must’ve been in there the whole time.

‘Slightly panicked I randomly splutter to a passerby “My cat is stuck in my engine.”

‘The passerby is really sympathetic. Her name is Carol and she is a #nurse. #NursesAreAwesome. We try and jack the car up to see him better, I can actually see his tail dangling underneath. Can’t get to him.

‘Carol very sensibly suggests we call the AA or equivalent – I get on the phone to my breakdown cover. They have no idea what to tell me- he bounces it up to his manager. Try the fire brigade?

‘In the meantime Carol has amazingly gone and bought some cat supplies: a little Salmon Sheba, some meat sticks and some water. We try and tempt him out. No luck.

‘I squeeze into the car underbelly and try and get my hands round him. Can’t feel any blood or singed hair, nothing appears stuck, but he won’t budge. Getting a bit desperate now I actually do call the fire brigade.

‘Feeling ridiculous I call 999. The controller who picks up is unbelievably nice, and he even more unbelievably says “it’ll be a few minutes, an engine is on its way”. A few minutes?!

‘The engine rock up and the five-strong crew come over. They are all as nonplussed as me- no one’s ever seen this before. Max (my cat) is still meowing away.

‘After some headscratching the fire officers get to work: one calls the RSPCA just in case, another gets under the car and a third tries to remove some of the engine to get at him from above.

We have to go and buy some tools from ASDA, but half the air filter comes out and we can see right down on top of Max now. No injuries, he isn’t stuck, he just can’t turn around.

‘Slowly slowly we push him and then pull him back into the underbelly. With a scratch and a squeeze he’s out, and into the arms of ‘Trock’, one of the fire crew. He passes him back to me and with a huge sigh of relief check him over: not a scratch on him.

‘Handshakes all round, the fire crew put my engine back together and then cheerily hop back onto theirs and disappear off. Max is purring in the backseat as if nothing has happened.

‘Twenty miles stuck inside a car engine and back home again, not a scratch.

He’s still going to the vet tomorrow but thank God he looks 100% fine.’

After tweeting an apology to the London Fire Brigade for wasting their time a fireman responded: ‘You are never wasting the Fire & Rescue Service’s time with incidents like this… It’s part of our remit to render humanitarian aid’

Another follower @GNaomiMartin commented: ‘ Thank goodness you wrote this. After yesterday’s s***e show in Westminster my faith in humanity, and cats, is restored.’