Catalan police ‘failed to act on a Belgian terror tip-off

Catalan police failed to act on a tip-off from Belgian security forces about extremist cleric Abdelbaki Es Satty who is believed to have radicalised the Barcelona terrorist cell.

The 42-year-old Moroccan national had been jailed for drug smuggling in 2004 but Spanish authorities were unable to send him home after his release over fears for his human rights.

A total of 16 people died after terrorists drove a van through Las Ramblas, Barcelona on August 17, less than a day after a house exploded killing suspected ring leader Abdelbaki Es Satty

According to the Sunday Times, the Catalan police failed to co-ordinate with the national security services in Madrid.

Es Saty is believed to have become friendly with one of the 2004 Madrid train terrorists Rachid Aglif while in prison.

One source said the house explosion where Es Satty is believed to have died 24 hours before the Barcelona attack should have been a warning.

It is claimed Catalan authorities did not wish to involve the National Police and the Guardia Civil over fears it would undermine their self-sufficiency.

A source said: ‘If the first explosion had been investigated, the conclusion that a terrorist attack was being prepared should have been reached.’ 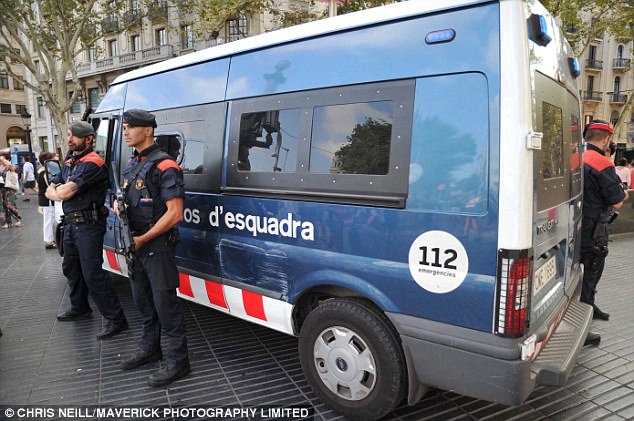 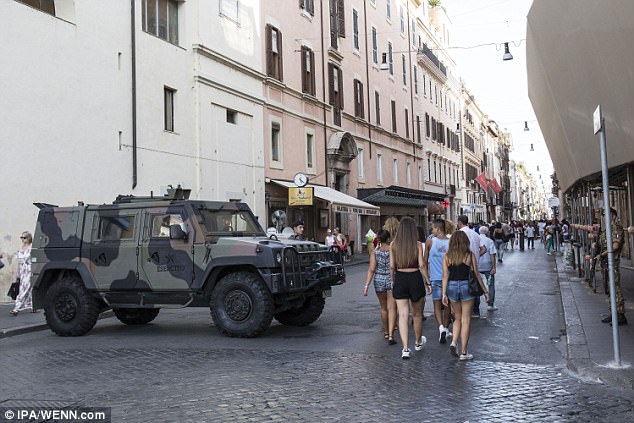 The Spanish government tried to throw Abdelbaki Es Satty, 42, out of the country in 2014 after he served a sentence for drug smuggling.

But a judge said two EU directives gave Es Satty the right to stay in the country – because he did not pose a ‘serious threat’.

After the failed attempt to deport him, Es Satty went on to brainwash members of the cell who carried out two terror attacks in Barcelona and nearby Cambrils earlier this month. 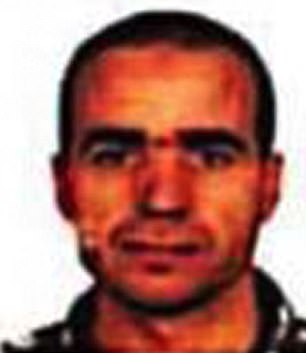 Today a 51-year-old German woman who had been in a critical condition in intensive care since being mowed down on Las Ramblas died in hospital. Her death brought the number murdered by the cell to 16. More than 100 more were injured when a van ploughed into pedestrians on the famous boulevard on August 17.

The judge highlighted two EU Council Directives – numbers 2003/109/EC and 2001/40/EC – which prevented the Madrid government from booting him out.

The EU directives say member states can only deport non-EU nationals who pose a ‘serious and present threat to public order or national security and safety’.

The judge ruled Es Satty was not a threat – because he had only been convicted of one offence and because he was making attempts to ‘integrate’ into Spanish society.

Es Satty was arrested in January 2010 on a ferry to Spain from north Africa, with 121 kilos of cannabis resin worth POUNDS 162,000 packed into a van.

He was jailed for four years and a month and served two thirds of his sentence in a prison in Castellon, north east Spain. It is believed he became radicalised while behind bars.

When he was released in 2014 the Spanish government issued a deportation order, expelling him from the country for five years.

Spanish law permits the government to deport foreign criminals who have been jailed for a year or more once they have served their sentence.

Senior government official David Barelles wrote on the order that Es Satty posed ‘a real threat which is sufficiently serious to justify his expulsion’.

But Es Satty appealed – insisting he had a right to stay in Spain despite his conviction.

His won his case at the Contentious-Administrative Court Number 2 in Castellon in April 2015.

Citing the two EU directives, judge De la Rubia wrote: ‘Although the conduct of the accused is serious, there is only one offence, which is old, and it is claimed he has laid down employment roots in Spain, which demonstrate his efforts at integration into Spanish society.’

The judge added that it would be ‘disproportionate’ to deport the Moroccan.

After leaving prison, Es Satty became the Iman of the mosque in Ripoll, a small town in the foothills of the Pyrenees, 65 miles north of Barcelona.

He radicalised local youths, mostly Moroccan immigrants aged 17 to 34, and is thought to have been the leader of the 12-man cell who brought mayhem to the region last month.

The gang plotted a terrorist ‘spectacular’ using vans packed with bombs made from butane-gas bottles and the explosive TATP – nicknamed the Mother of Satan.

They planned to blow up targets including the famous Sagrada Familia basilica.

But the plot was foiled when their bomb factory in Alcazar, 125 miles south west of Barcelona, exploded – killing Es Satty and another member of the cell.

Police initially thought the explosion was caused by a gas leak. They later found a book in the rubble linking the house, and specifically Es Satty, to ISIS.

After the explosion foiled their original plan, the gang carried out a less sophisticated attack on August 17.

Abouyaaqoub fled on foot and then carjacked Spaniard Pau Perez, 35, stabbing him to death and stealing his Ford Focus.

Later that night five other members of the gang ploughed into pedestrians in the seaside town of Cambrils before going on the rampage with an axe and large knives, stabbing one person to death.

Four were shot dead by a patrolling police officer, who happened to be a former elite soldier. The fifth was shot by another officer.

Es Satty lived in Vilvoorde, then a hotbed of extremism on the outskirts of Brussels, in early 2016.

Locals warned police that he was preaching hatred among the muslim population. And a Belgian police officer emailed counterparts in Spain saying: ‘The more information you can share about this individual the better.’

On March 8, 2016 the Catalan police force, the Mossos d’Esquadra, replied that Es Satty was not known to be linked to terrorism.

But last week it was reported that police obtained a warrant to tap the Iman’s phone calls in 2005 as he was suspected of being linked to al-Qaeda. Despite these suspicions he was never arrested for terrorism offences.

Catalan interior minister Joaquim Forn said: ‘This was not a failure. They asked us for information. We gave what we had, and at no time that we were aware of had he been investigated or was considered dangerous.

‘If we had been informed of this, we would have acted differently.’