Catalonia to explode in violence if Madrid imposes rule

Catalonian could explode into violence this morning as the Spanish parliament is due to seize control of the rebel region in a bid to end its struggle for independence.

The senate, where Prime Minister Mariano Rajoy’s Popular Party holds a majority, is meeting to vote on steps to depose Catalonia’s secessionist government before the week is out.

It comes after the region held an independence referendum on October 1 that the Spanish government deemed illegal.

But the Catalan parliament, where pro-secession parties hold sway, will meet in Barcelona where a proposal to vote on splitting from Spain could work its way onto the floor.

Catalan President Carles Puigdemont yesterday ruled out a snap election over fears it would trigger violence.

He revealed he considered calling elections in an effort to ease the separatist crisis as Madrid prepares to seize control of the region.

Catalonian could explode into violence this morning as the Spanish parliament is due to seize control of the rebel region in a bid to end its struggle for independence. Pictured: Angry protesters in Barcelona yesterday 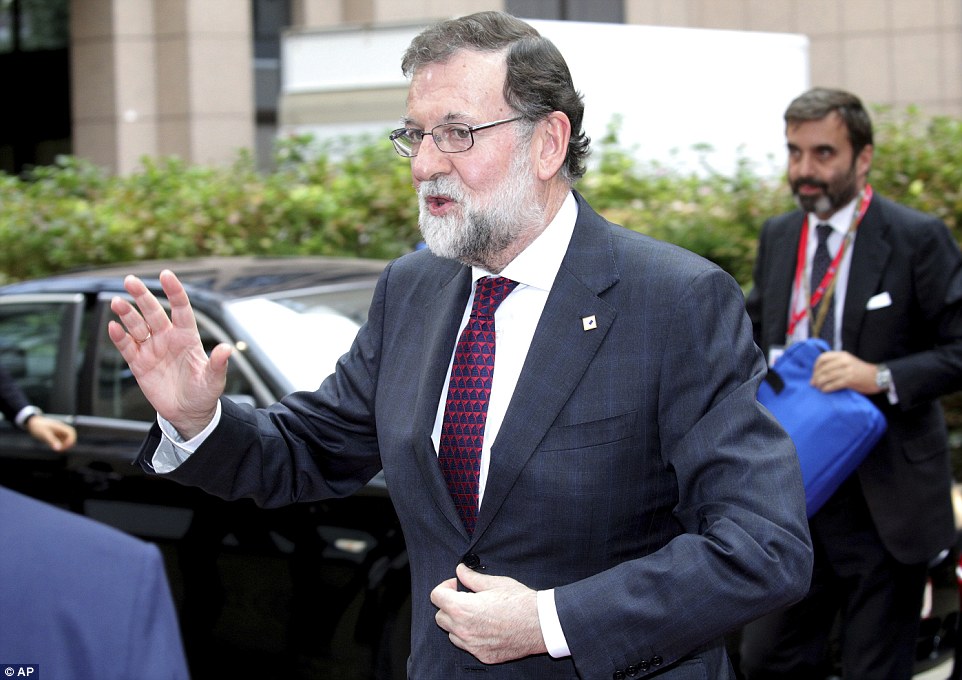 The senate, where Prime Minister Mariano Rajoy’s Popular Party holds a majority, is scheduled to meet from 8am GMT to vote on steps to depose Catalonia’s secessionist government before the week is out. Pictured: Spain’s PM 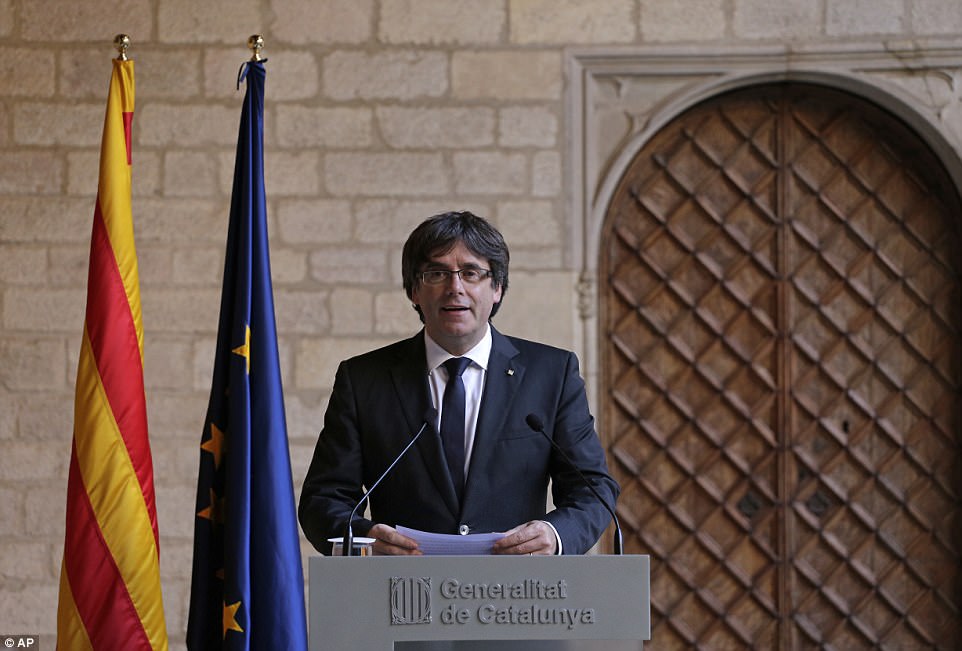 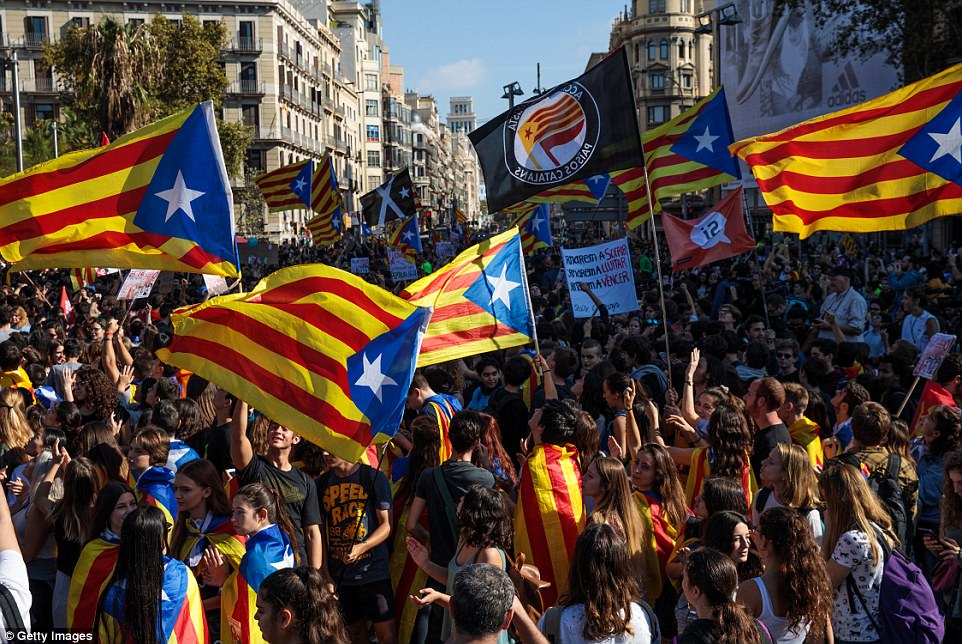 Tensions: University students caused chaos after calling a ‘strike’ to demonstrate the Spanish government’s looming revoking of Catalan autonomy, but it saw lectures cancelled and others prevented from entering university grounds 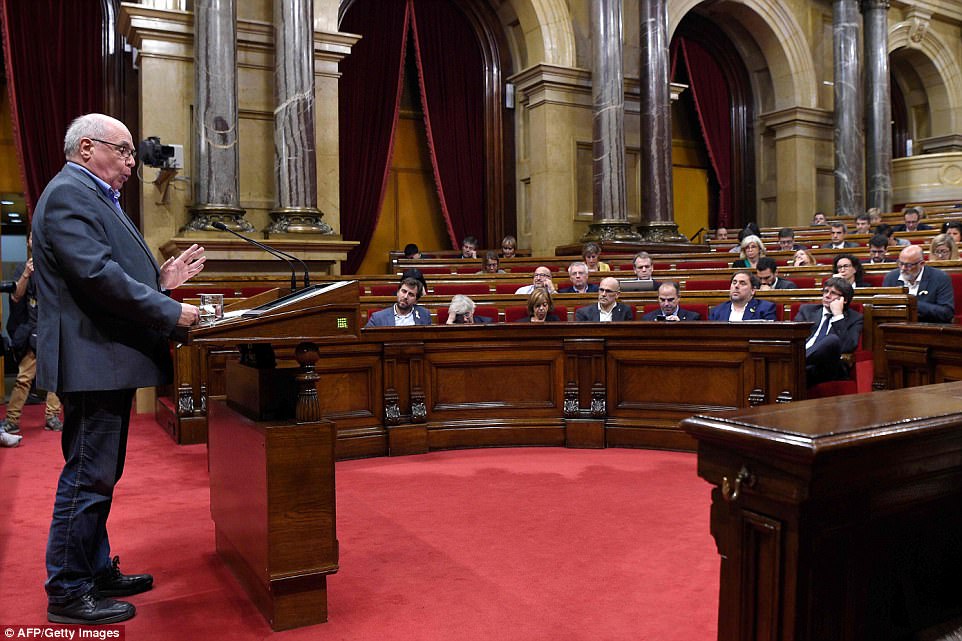 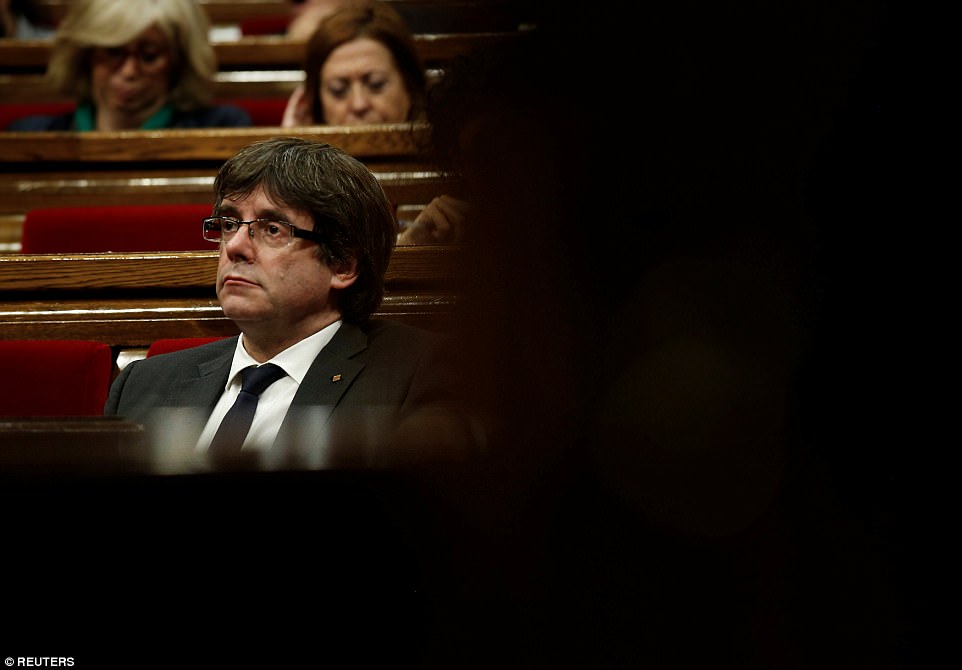 Mr Puigdemont sat glumly as he listened to the debate, while outside supporters of independence branded him a ‘traitor’ 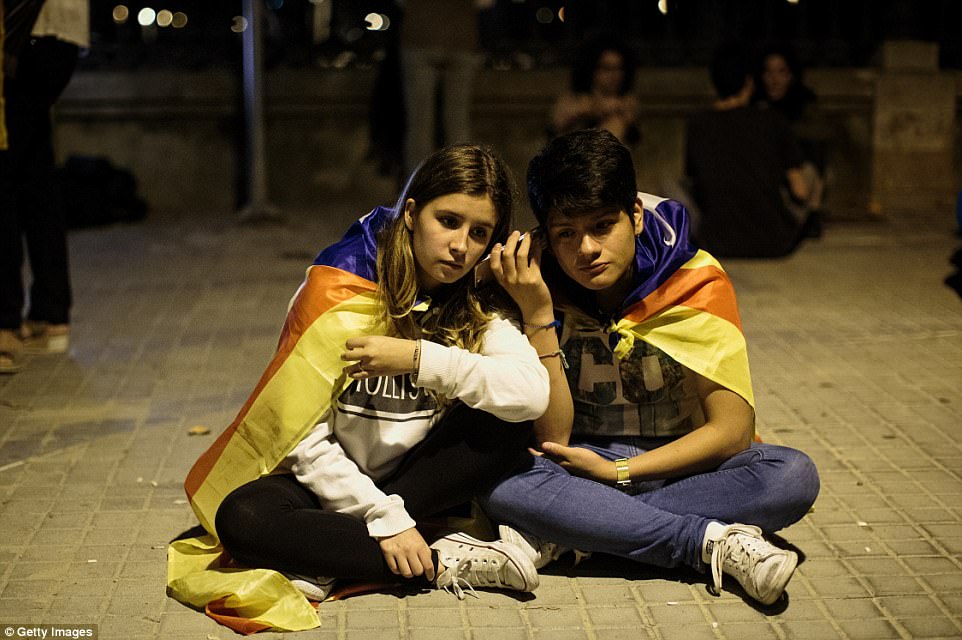 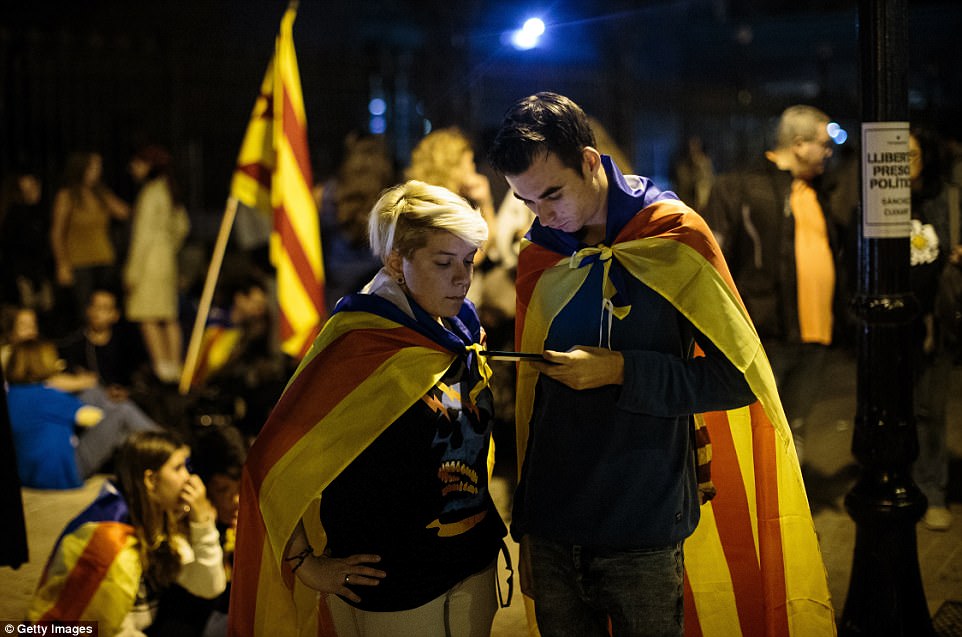 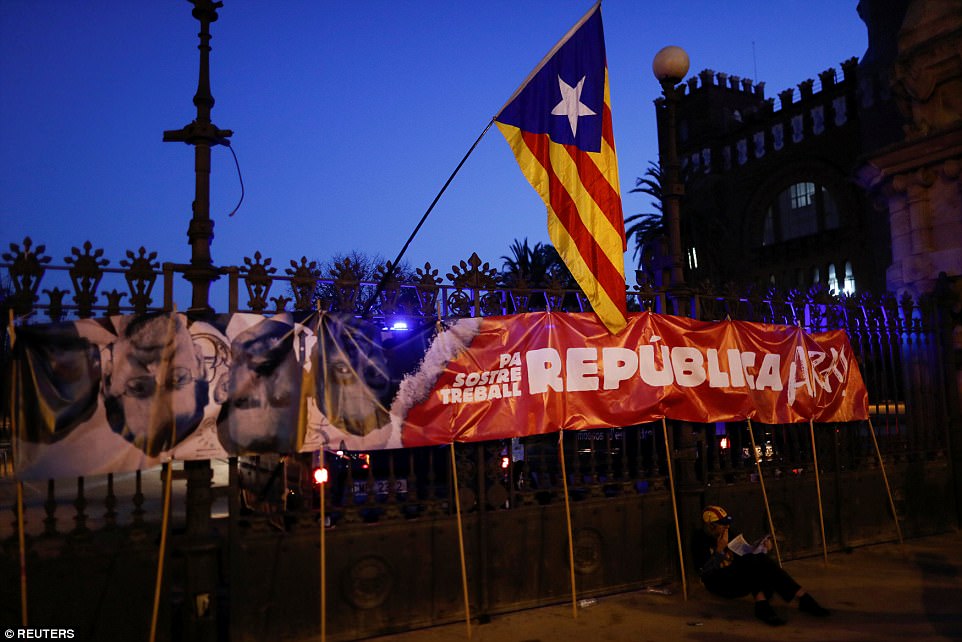 Mario Rajoy, Spain’s Prime Minister, is pictured (second left) on a banner which reads ‘Republic’. He has taken a firm line against Catalonian independence, accusing Mr Puigdemont of holding an illegal referendum

But he decided not to because ‘abusive’ Madrid did not offer enough ‘guarantees’ that they would not take over control of Catalonia today.

In a televised statement, he said it was now ‘up to the (regional) parliament’.

The regional leader also justified the decision not to hold an election by saying he believed it would spark more violence after the October 1 independence referendum descended into chaos. More than 800 people were injured during clashes with police.

How would Spain seize control of Catalonia?

Invoking the never-before-used article 155 of the constitution, designed to rein in rebel regions, the Spanish government has proposed to dismiss the entire Catalan regional executive, including president Carles Puigdemont and vice-president Oriol Junqueras.

They would be replaced by nominees from the central government. Prime Minister Mariano Rajoy says national ministries will take over for as long as this ‘exceptional situation’ lasts.

The measures also seek power for Rajoy to call elections for a new regional parliament ‘in a maximum timeframe of six months from the Senate’s approval’.

They may also replace anyone working in a public entity, such as the region’s broadcasters.

Whoever is named to take the reins of the regional interior ministry will ‘give members of Catalonia’s police – the Mossos d’Esquadra – direct instructions they will have to comply with’, according to a government document setting out the plans.

If necessary, members of the Catalan force can also ‘be replaced by state security forces’, according to the document.

Madrid had already seized control of wide areas of Catalan public spending in September, seeking in vain to stop the referendum.

It will now seek full control over the region’s finances, including budgets and tax, to ensure that not a single euro of public money can be spent on efforts to break away.

Regional ‘telecommunications and digital services’ will also come under Madrid’s governance, and the heads or employees of Catalan public media can be replaced.

The Spanish government wants to ‘guarantee the transmission of truthful, objective and balanced information, which respects political, social and cultural pluralism, and also the territorial balance’.

This means Madrid will have a say in what is broadcast on popular Catalan media such as TV3 television.

Unions at TV3 have accused the channel of being biased in favour of independence, just as unions of the Spain-wide TVE news channel have accused it of being pro-Madrid.

The measures would also see Madrid take control of the Catalan parliament, where pro-independence lawmakers have an absolute majority of 72 seats out of 135.

The Spanish government has not called for Carme Forcadell, the head of the Catalan parliament and a staunch independence supporter, to be replaced.

But it stipulates the regional parliament ‘won’t be able to process initiatives that run counter’ to the proposed measures.

In order to ensure this, the central government wants to appoint an entity that will ensure every single text being processed through parliament conforms to the measures.

It’s believed he also changed his mind because of huge divisions within his pro-independence coalition government. Many of his MPs believe he should simply unilaterally declare independence, with one today resigning over the issue.

It follows reports that Puigdemont’s wife has left the country with their two children after their police guard was axed.

Huge numbers of independence supporters marched through Barcelona yesterday, blocking several streets as they headed to the government palace after students at the local university went on ‘strike’.

The three-day strike by students at the Autonomous University of Barcelona saw dozens of protesters block entry to facilities in protest of the political crisis, with hundreds of others prevented from attending lectures as a result.

Access was restricted by protesters resulting in students struggling to get in the education facility after commuting from the nearby railway station of Cerdanyola del Valles.

There were reports of clashes between picketing students and those wanting to attend lectures, as well as threats made on social media by protesters.

A professor who teaches economics at the university said: ‘There is always trouble when a strike is called.

‘They have let us teachers pass, but if you wanted to remove the chairs it is the usual mess. It makes me crazy, they justify what they do, but you are not allowed to speak.’

The unnamed professor said numerous classes had been suspended as a result of the protests.

A law professor added: ‘There was a mess because many students wanted to come in and argued with the picket because they wanted to pass, but the picket did not change its attitude.

He added that of the ‘hundreds of students who usually attend each day’, only 50 made it inside.

President Puigdemont’s cabinet, including Junqueras, met for frantic meetings overnight and on Thursday morning and it was thought he was set to call a snap election.

His pro-independence coalition has 72 seats in the Catalan Parliament out of 135.

If the regional government decides to call a snap election it could see Puigdemont increase his majority.

This would then give him mandate to declare that independence had been won lawfully, essentially turning the regional election into a new referendum, after the one earlier this month was branded ‘illegal’ by Madrid.

Meanwhile, local media reports that his wife, actress-turned journalist Marcela Topor, has left their family home with their two children, and returned to her native Romania. 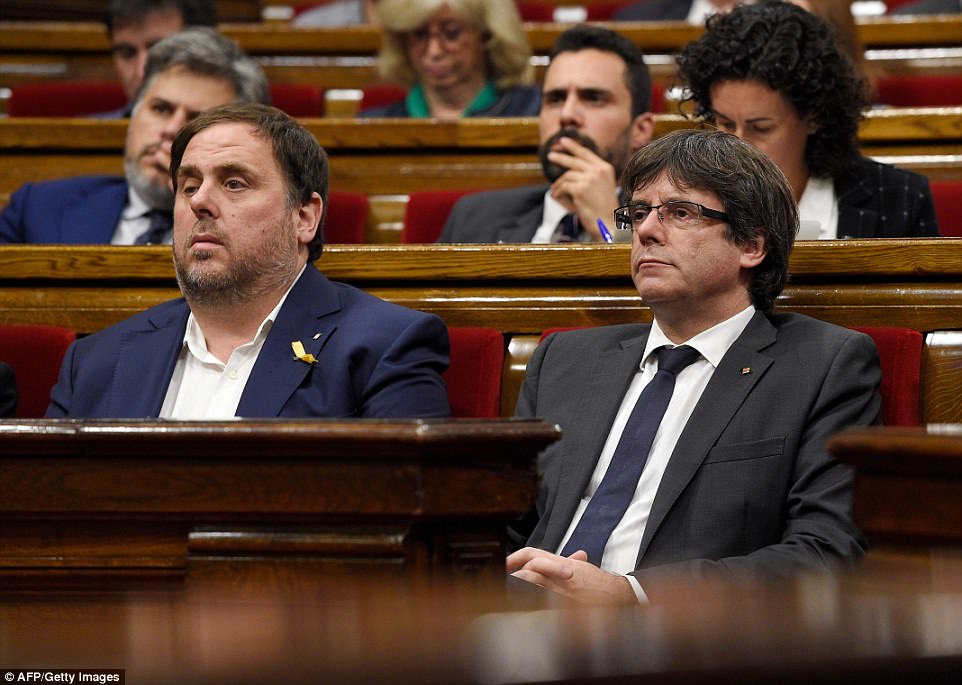 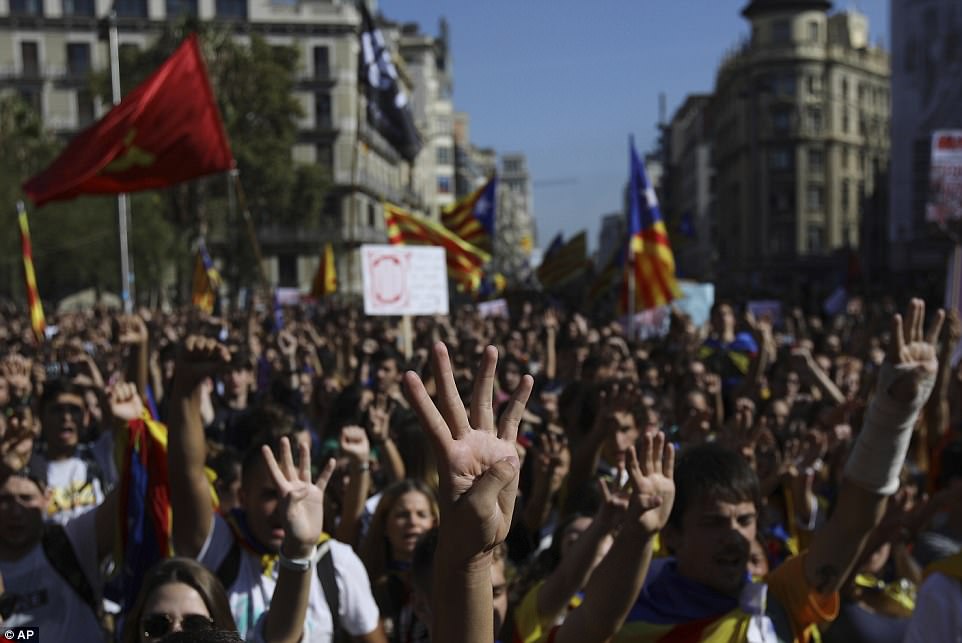 Hands up: Students gesture as they march during a protest against the Spanish government announcement of implementing the article 155 in Catalonia 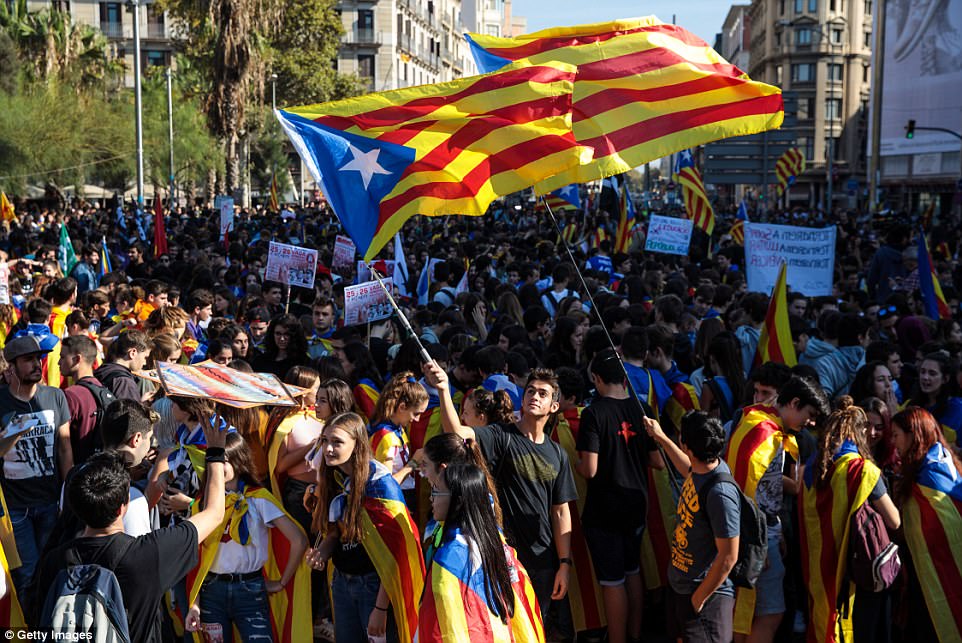 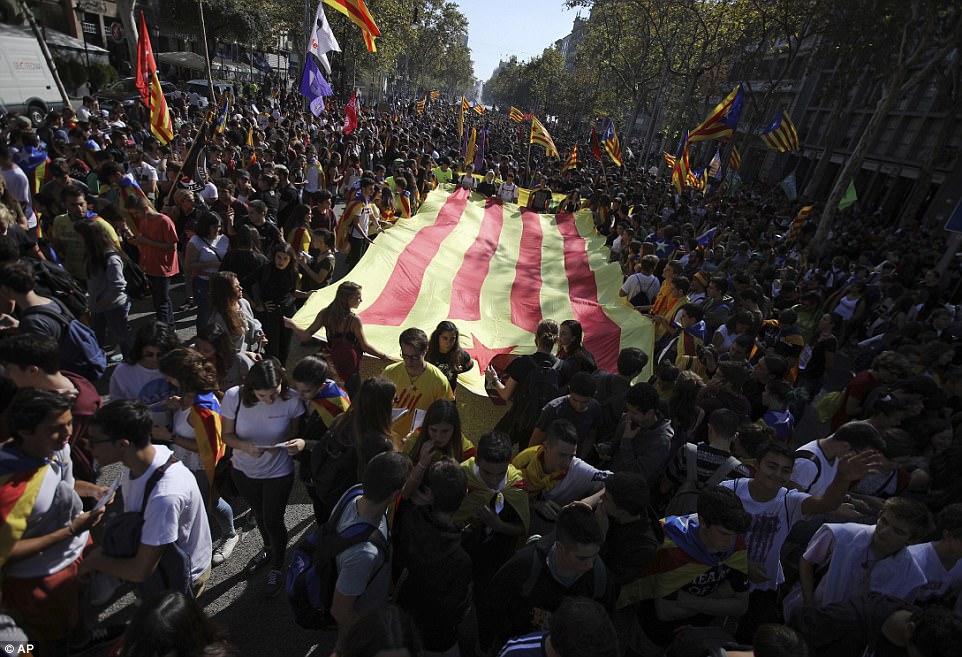 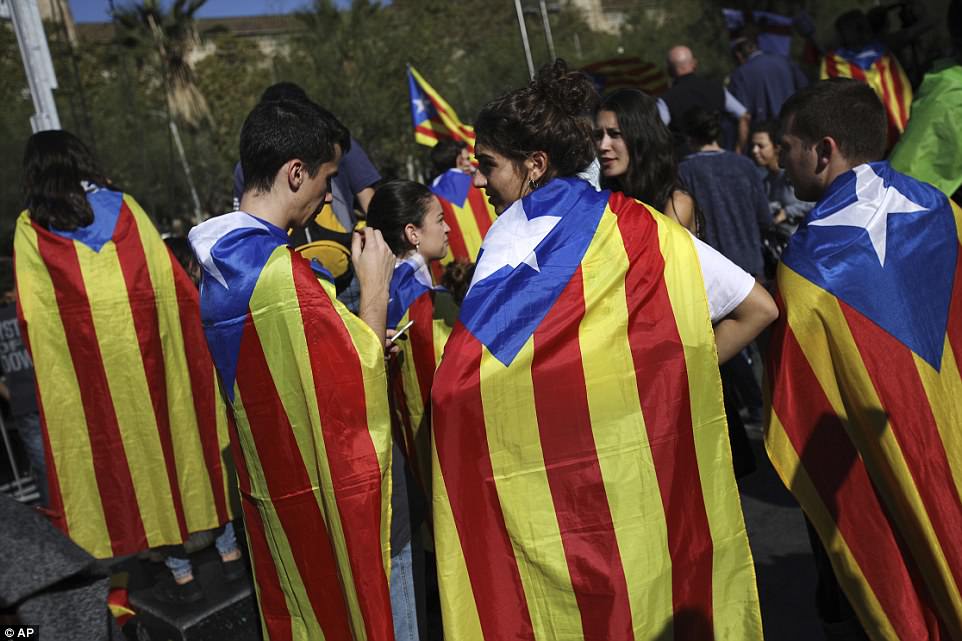 The Catalan parliament is due to meet to discuss Spanish government’s plans to remove the leaders of the regional government in a session today, which may extent to Friday

The £600,000 villa in Girona, near the French border used to be under police protection, but neither Puigdemont nor his wife or their two daughters have been seen at the home for over a week, neighbours say.

‘It’s odd because since Carles Puigdemont has been president, the Mossos [regional police] have been keeping watch on the neighbourhood 24 hours a day. Now they’re not around,’ the neighbour told news website Vanitatis.

Other Spanish news outlets have also reported that Ms Topor may have travelled to Romania because her husband is about to make himself an enemy of the Spanish state by declaring independence.

Ms Topor is the editor of Catalonia Today, an English-language magazine and website based in Girona her husband helped launch in 2004 before he left journalism to go into politics.

She also hosts the television programme Catalan Connections, which features interviews in English with resident foreigners in Catalonia. 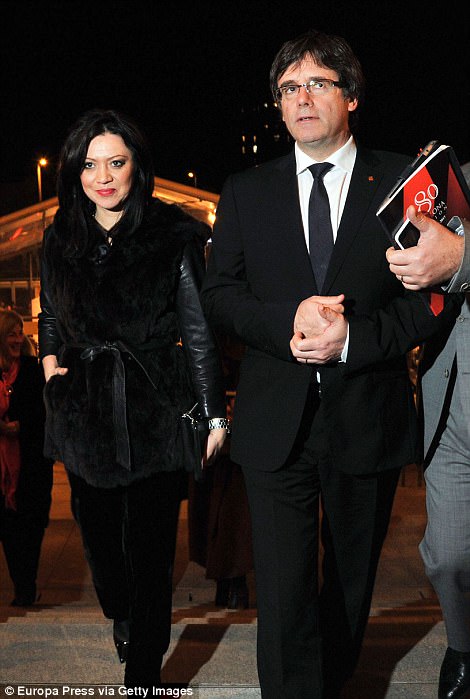 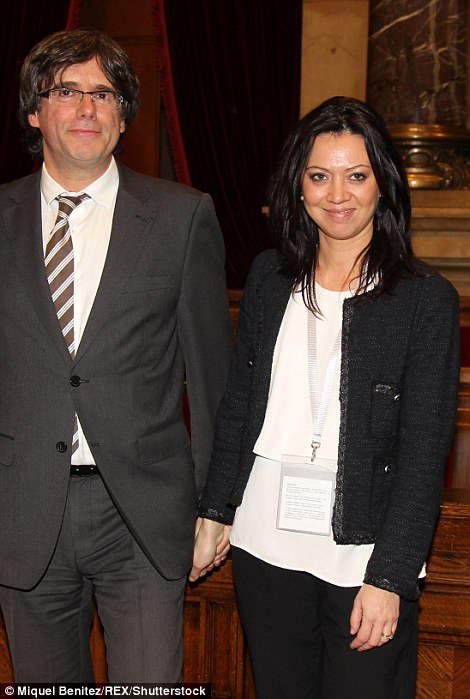 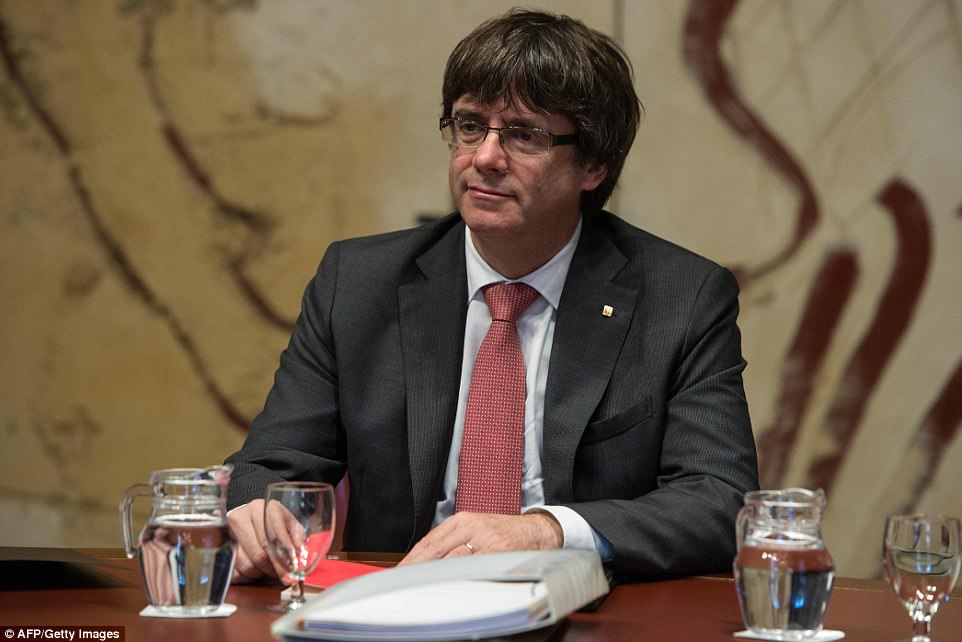 Still no answer: Spain has demanded that  Puigdemont withdraws his ‘suspended’ declaration of independence, but he has not yet chosen to do so 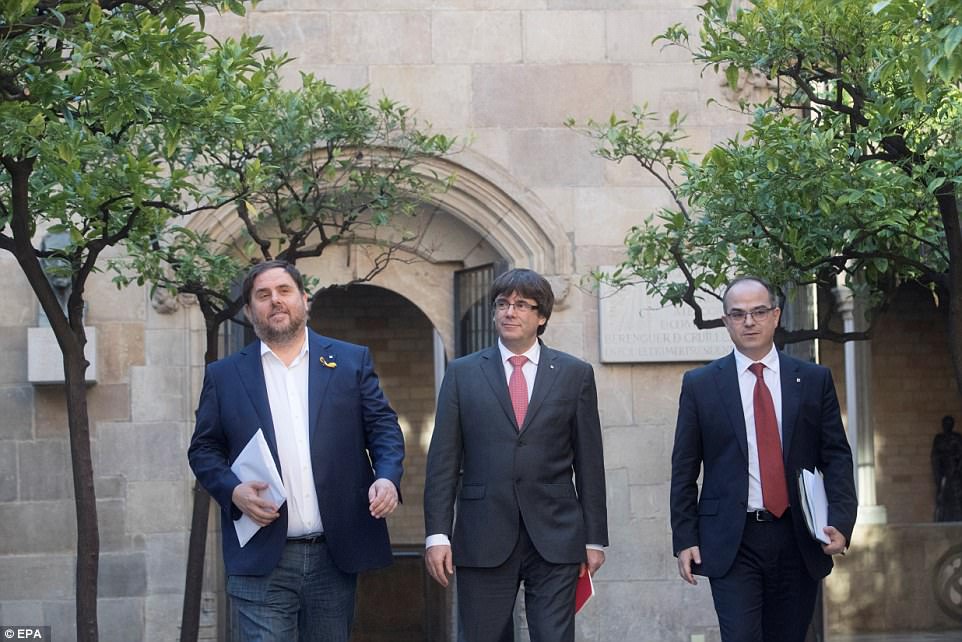 Judgement day: Puigdemont is seen with Deputy President, Oriol Junqueras, left, and regional Presidency minister, Jordi Turull, right as they make their way to take part in the weekly regional cabinet meeting in Barcelona, on Tuesday

The couple met  20 years ago when Ms Topor was touring her husband’s native province of Girona with a British theatre company.

Mr Puigdemont reportedly became so enamoured that he travelled to her home town of Iasi, 230 miles north of Bucharest, to woo her and get to know her family.

They married 17 years ago with a civil ceremony in the Costa Brava resort of Roses and an Orthodox wedding ceremony Romania.

WHY CALL A SNAP ELECTION IN CATALONIA?

Calling a snap election could potentially stop Madrid imposing direct rule in Catalonia, a government decision which is set to officially come into force tomorrow.

It is also thought that Carles Puigdemont privately sees a new election as a way of strengthening his majority, which he could use to either call another referendum or make an official declaration of independence.

Currently, his party Junts pel Sí (Together for Yes) has 62 seats of 135 in the regional parliament, and rules with the support of another pro-independence party which has ten seats. The four opposition parties have 63 seats in total.

A snap election would also be a face-saving move for Mr Puigdemont in the event of anti-independence parties winning majority, and allow him a graceful exit.

The Spanish government has said a snap election would be a first step but Puigdemont would also have to officially withdraw the ‘suspended’ declaration of independence he made earlier this month.

In a radio interview this week, Justice Minister Rafael Catala said ‘Everything is not fixed just by calling an election.’

Puigdemont is understood to be living alone in the Catalan President’s official residence, situated in a residential wing of the historic palace called the Palau de la Generalitat which is the seat of the Presidency and the Government of Catalonia.