A far-left pro-independence party in Catalonia is calling for ‘mass civil disobedience’ following the Spanish government’s unprecedented move to trigger a section of the constitution allowing the government to take direct rule of the region.

In an announcement Monday, the CUP, a key ally in the regional parliament to the minority ruling separatist coalition, said the move will be met by civil disobedience as a form of non-violent resistance

Catalonia said on Monday it was confident all officials including police would defy attempts by Madrid to enforce direct rule on the region, in an escalating dispute that has raised fears of unrest among Spain’s European allies.

The CUP described the move by Spanish Prime Minister Mariano Rajoy as ‘the greatest aggression against the civil, individual and collective rights of the Catalan people’ since the dictatorship of Gen Francisco Franco, who died in 1975.

The CUP, a key ally in the regional parliament to the minority ruling separatist coalition, said on Monday that Madrid’s decision to take direct rule of Catalonia would be met with civil disobedience as a form of non-violent resistance

It said it would elaborate on what form of action this would take later in the week.

‘An aggression which will be met with massive civil disobedience,’ the CUP said in a statement.

The Spanish government has invoked special constitutional powers to fire the regional government and force a new election to counter an independence drive that has rattled the economy.

A vote in the Senate to implement direct rule is due on Friday.

But the leaders of the secessionist campaign said a disputed referendum on October 1 gave them the mandate to claim independence from the rest of Spain.

‘It’s not that we will refuse (orders). It is not a personal decision. It is a seven million-person decision,’ Catalonia’s foreign affairs chief Raul Romeva told BBC radio.

Romeva was asked whether he believed all institutions, including the police, would follow orders from Catalan institutions rather than from the Spanish government.

‘And from that perspective, I have no doubt that all civil servants in Catalonia will keep following the instructions provided by the elected and legitimate institutions that we have right now in place (in Catalonia),’ he said. 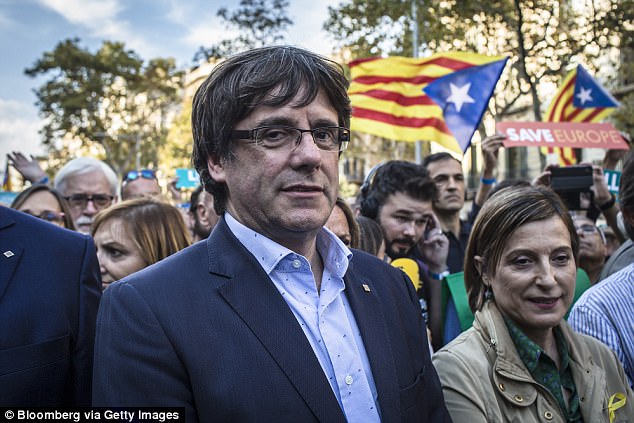 Catalonia said on Monday it was confident all officials including police would defy attempts by Madrid to enforce direct rule on the region, in an escalating dispute that has raised fears of unrest among Spain’s European allies. Pictured above, Catalonia president Carles Puigdemont

Several hundred Catalan municipalities said they were against direct rule from Madrid and asked the Catalan parliament to vote on a motion rejecting it.

Catalan president Carles Puigdemont has called the Catalan parliament to meet this week to agree on a response to Madrid, something many observers said could pave the way for a formal declaration of independence.

The assembly will meet on Thursday to agree a response to direct rule.

Puigdemont’s most radical pro-independence partners, like the minority far-left CUP party, want him to use the session to declare Catalonia is going it alone immediately.

Several influential Catalan newspapers called on Puidgemont on Sunday to resolve the crisis by calling a snap election before direct rule becomes effective. However, Catalan government spokesman Jordi Turull said this was not an option.

It is not clear whether a vote in the region would help resolve the crisis.

Catalan leaders met on Monday morning to decide the date of their next Parliamentary plenary session, which is expected to take place on Friday.

As the talks took place, the region’s foreign affairs spokesman warned that the EU will lose credibility if it lets Madrid impose direct rule on Catalonia, and only the Catalan people have the right to change the regional institutions.

‘How can the European Union live with that situation if it appears?’ Raul Romeva told BBC radio, when asked how the Catalan regional government would prevent the Spanish government from re-imposing direct rule.

‘How can they be credible if they allow this to happen? Because what I can tell you is that the people and the institutions in Catalonia would not let this … happen.’ 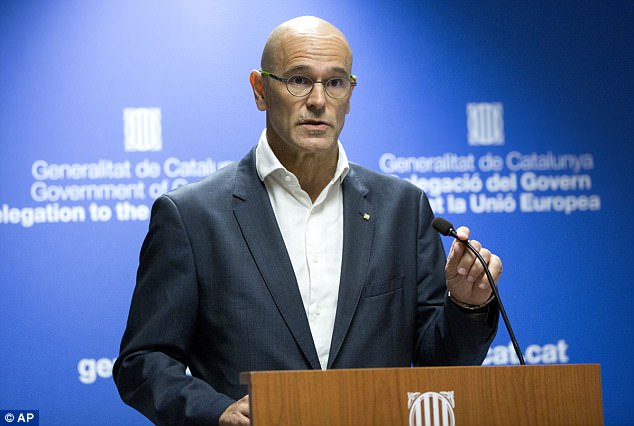 Catalan Minister of Foreign Affairs, Institutional Relations and Transparency, Raul Romeva warned that the EU will lose credibility if it lets Madrid impose direct rule on the region

Such a declaration could see the regional Mossos d’Esquadra police force pitted against the many national police officers already stationed in Catalonia.

Madrid officials are cautiously waiting for the response from Puigdemont after he called their decision to impose direct rule as the worst attack since General Franco’s dictatorship.

He accused the Spanish government of ‘slamming the door’ on his appeals for talks to resolve the country’s worst political crisis since its return to democracy 40 years ago.

The President’s spokesman Jordi Turull has said elections are not an option and will not be discussed at this week’s meeting.

Pro-independence partners, like the minority far-left CUP party, want Puigdemont him to use the session to declare Catalonia is going it alone immediately.

An opinion poll published by the El Periodico newspaper on Sunday showed a snap election would probably have results similar to the last ballot, in 2015, when a coalition of pro-independence parties formed a minority government.

The survey found that pro-independence MPs would poll just 47.9 per cent in a new vote, but would maintain power by joining forces in a coalition.

The GESOP poll, for respected Catalan daily El Periodico, was carried out before the Spanish government announced its intention to take back control of Catalonia and call elections in the next six months by invoking the Spanish constitution’s controversial Article 155.

But it was conducted after the leaders of two grassroots pro-independence movements were jailed by a Madrid-based court investigating them on suspicion of sedition and a controversial – and illegal – referendum on October 1 marred by police violence. The CUP described the move by Spanish Prime Minister Mariano Rajoy (pictured) as ‘the greatest aggression against the civil, individual and collective rights of the Catalan people’ since the dictatorship of Gen Francisco Franco, who died in 1975

The publication of the poll results also coincided with Puigdemont ally Jordi Turull’s admission elections, which Spanish PM Mariano Rajoy wants the Catalan government to call instead of him, were not ‘on the table’ at the moment.

Spain’s Deputy Prime Minister said Puigdemont would be out of a job once direct rule was enforced and Madrid would install its own representative. The Spanish government has said it would call a regional election within six months.

‘They are president of the regional government and senior figures in that government because of the constitution,’ said Soraya Saenz de Santamaria during a radio interview.

‘They are not entrusted with that role by any divine authority,’ she also said.

Catalan authorities said about 90 percent of those who took part in the referendum on October 1 voted for independence. But only 43 percent of the electorate and 1 in 3 Catalans participated, with most opponents of secession staying at home.

The Catalan crisis has raised fears among European countries that it could spill over to the rest of the continent.

From Scotland to Flanders and Lombardy, the 2007-09 financial crisis, unemployment and migration have allowed anti-EU and populist parties to feed off discontent with political elites and reopen regional divisions.

At a European summit last week, leaders sought to minimise Spain’s crisis with Catalonia and described the secession bid as a domestic issue.