Celebrities including Rob Delaney, Gary Lineker and James Corden have all railed against the amount of homework given to British children.

Many of the stars put their success down to playing with their friends and pursuing their passions outside of school.

American-born Mr Delaney’s rant came days after he spoke movingly for the first time about the death of his two-year-old son Henry, whose life was taken by cancer in January.

The Catastrophe star, 41, who is from Boston but lives in the UK, has two more children and his wife Leah is pregnant.

He said: ‘Why do they give seven year olds so much homework in UK & how do I stop this? 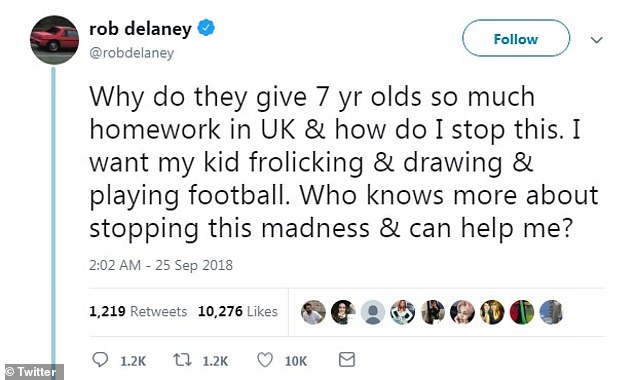 His tweet has struck a chord with fellow parents, racking up more than 1,200 retweets and nearly 11,000 likes 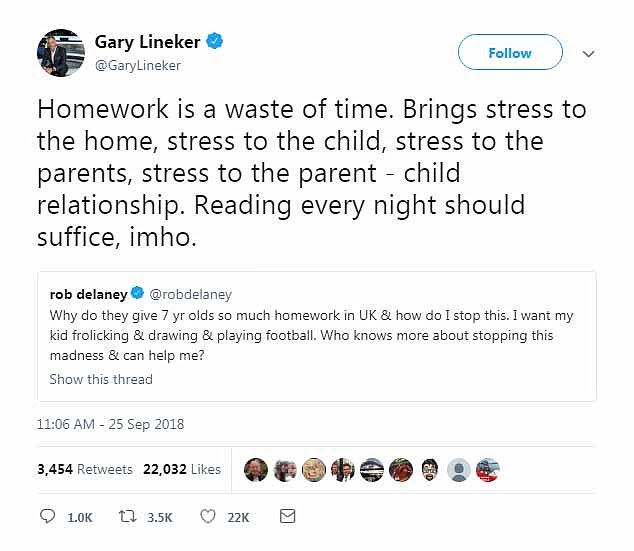 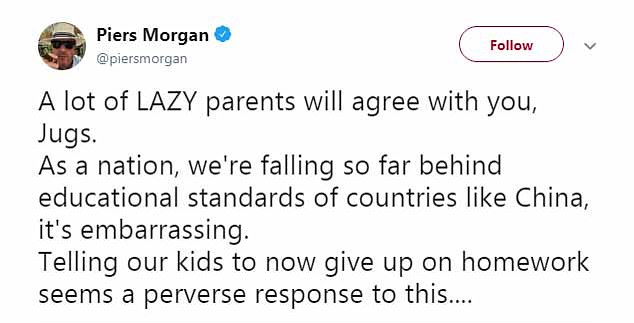 ‘I want my kid frolicking and drawing and playing football. Who knows more about stopping this madness and can help me? So nuts. 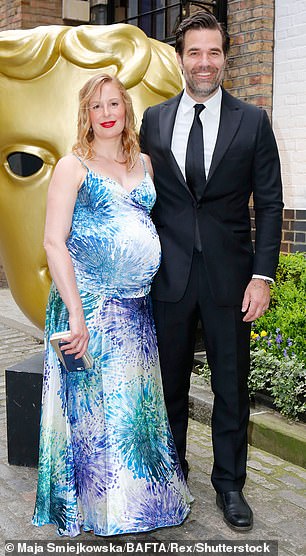 Rob Delaney and his wife Leah are expecting their fourth child

‘I want my kids to socialize & get chicken pox & have mashed potatoes jammed in their pockets by their friends. Other 7 yr olds are more fun than my wife and I fun as we are.

‘If you’re a parent complaining your kids’ teachers don’t give them homework, just give your kid to me’.

His description of primary school life has sparked furious debate online, with many other celebrities chipping in on Twitter.

England footballer turned presenter Gary Lineker said: ‘Seems an awful lot of parents agree on the pointlessness and stressful nature of homework. Kids should be allowed to play and enjoy home-life with their parents without the divisiveness of work they have plenty of time to do at school. There’s plenty of time to be an adult’.

But Piers Morgan responded: ‘A lot of LAZY parents will agree with you, Jugs. As a nation, we’re falling so far behind educational standards of countries like China, it’s embarrassing. Telling our kids to now give up on homework seems a perverse response to this’.

He added: ‘Did you get to be a world class footballer by skipping training?

Mr Lineker responded: ‘No, I did it by skipping homework so I could play and practice at home’.

Comedian Romesh Ranganathan weighed in to agree with Mr Delaney, saying: ‘It’s absolutely ridiculous. There should be none.’ 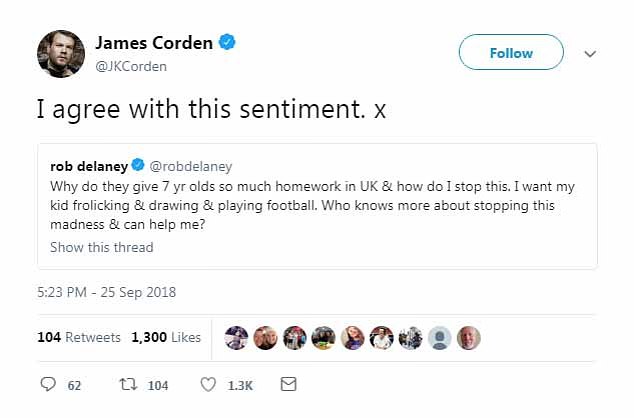 But teacher Flora Marge claimed: ‘I’m a teacher. Most parents actually complain when you don’t set homework. We can’t win.’

National guidelines about how much time children should be set were scrapped in 2012 by Michael Gove.

The original guidelines, set by the Labour government in 1998, suggested a sliding scale from five to seven year olds who should do just 10 minutes a night to two-and-a-half hours a night for those studying for their GCSEs.

Across the country the amount of homework set varies wildly, with some kids doing just 10 minutes a day, but others are expected to completely numerous tasks every night.

PJ Holden said: ‘We’ve had to categorically state to our son’s teacher that he’s not doing any more than an hour of homework per night and we’ll stop when he hits that regardless of whether it’s done. It’s madness.’

One individual added: ‘My son (8) has to do 10 mins of reading a night (at least 3 times a week, using a book of his choice), 7-8 spellings for the week and a fun project for each half-term. Seems like a good balance at this stage.’

Emily Cadhart tweeted: ‘I’m both a primary school teacher and a mum and am DEAD AGAINST homework from both sides of the argument. It’s pointless & stressful for families and adds to teacher admin & marking load for ZERO benefit.’

Rob Delaney’s extraordinary and moving unpublished book about his son 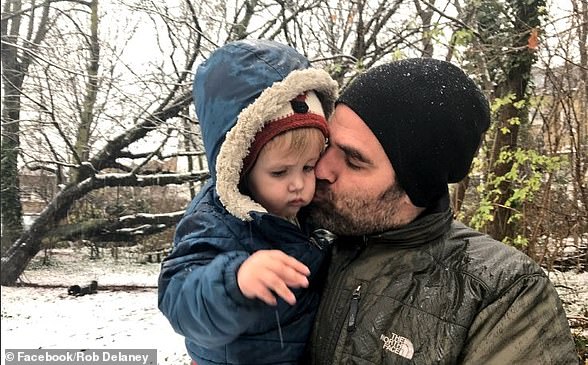 Catastrophe star Rob Delaney, 41, has shared a heartbreaking extract of a book he started writing about his son Henry’s  brain tumour battle, but couldn’t finish when his two-year-old son died in January this year. Pictured: Father and son together during Henry’s illness 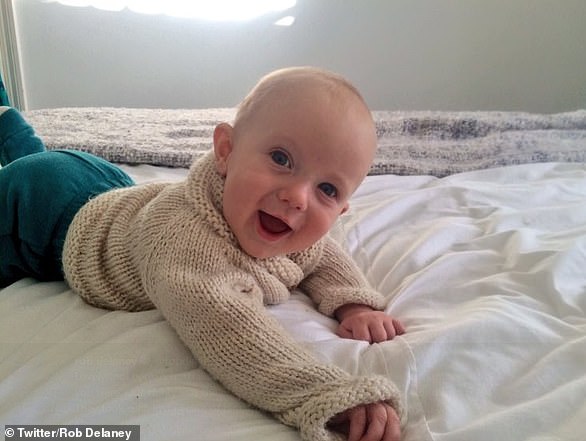 Rob Delaney’s young son Henry was diagnosed with a brain tumour in 2016 and had surgery to remove it, but the cancer returned in the Autumn of 2017

Catastrophe star Rob Delaney has shared a heartbreaking extract of a book he started writing about his son’s brain tumour battle, but was unable to finish when his two-year-old son died in January this year.

Henry’s cancer returned in the autumn of 2017, and his devastated father stopped writing because the family ‘just wanted to be with Henry around the clock and make sure his final months were happy. And they were.’

Revealing why he decided to share extracts of the book now, the 41-year-old revealed he ‘didn’t want to sit on it, in case it could make anyone else feel less insane.’

In an essay for Medium he explained how his initial aim had been to let other parents of seriously ill children that ‘someone understood and cared’.

‘But I can’t write that book anymore because our family’s story has a different ending than I’d hoped for,’ he explained.

He described crying as he listened to recordings of his son babbling before a tracheotomy rendered him unable to speak for a whole year, and his ‘golden’ smile lighting up his face, which was paralysed on one side.

Here is an extract from his unpublished book:

My biggest fear had always been that I wind up somehow being conscious for eternity. Like that I die, wind up in heaven or hell or wherever and I remain ‘me’ and just never shut off and have to endure being conscious and aware and nothing is wonderful enough or horrible enough to engage me for that long, i.e. eternity.

That might be a factor in the heavy drinking I quit fifteen years ago; the idea that I could really effectively hit my own consciousness’ kill switch as needed. Might also be why I’ve always enjoyed naps more than food or money.

That fear went away when my wife and I had kids. Or boys, specifically. My sperm only makes boys for some reason. The fear went away because I realized I could now do eternity and be okay.

I could just call to mind the image of one of my sons, or the smell of their heads, or the feel of one of their little feet in my hand and I’d be happy. Give me a Polaroid of one of them to hold on to and I could do two eternities.