‘I lost my mind completely’: Catastrophe star Sharon Horgan, 50, opens up about her OCD and how she had anxiety attacks after being separated from her two daughters

By Chris Hastings, Arts Correspondent For The Mail On Sunday

As the creator of hit TV comedies Catastrophe and Motherland, Sharon Horgan portrayed parenting for laughs – but in real life, she has revealed, the strain of being a working mother triggered obsessive compulsive disorder.

The 50-year-old star says she was racked by anxiety at being separated from her two daughters when she moved to America for five months to work.

‘I lost my mind completely,’ she reveals on Radio 4’s Desert Island Discs today. ‘I’ve got OCD from it, I developed anxiety. I would lie in bed at night and I’d feel my heart going and think, “I’m about to have a heart attack.” It was only afterwards that I realised it was anxiety.’

She moved to New York to work on the series Divorce, which she created for HBO and which starred Sex And The City’s Sarah Jessica Parker. It helped make Horgan’s name in the US, but it came at a cost, even though she tried to mitigate the separation from her daughters. ‘Every couple of weeks I’d go back [to London] or they would come over, but it was still ridiculously long and painful. It was awful,’ she said.

‘It was a choice we made as a family and lots of good things came out of it, but it sort of messed me up for a while and I wouldn’t want to do it again.’

During her interview, Horgan, who is bringing up daughters Sadhbh, 16, and Amer, 11, with her businessman ex-husband Jeremy Rainbird, speaks candidly about her mental health struggles.

She says: ‘I’ve recently started having therapy and taking the normal person’s route rather than making a TV show about it. 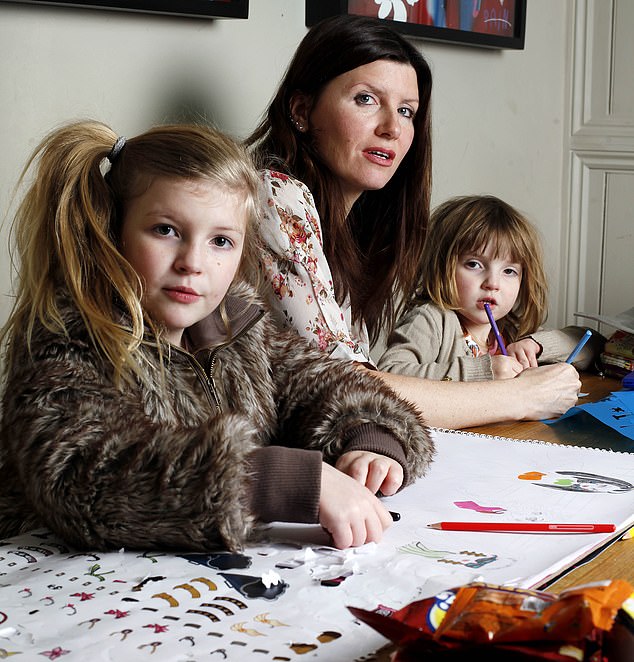 Horgan, who is bringing up daughters Sadhbh, 16, and Amer, 11, with her businessman ex-husband Jeremy Rainbird, speaks candidly about her mental health struggles

‘I’ve never been that great at working things out or talking. You can tap it into your laptop and that feels easier than saying it out loud. I think generally I am trying to explore parts of my life that I haven’t sort of fully worked out.’

But Horgan reveals she had feared that seeking help with her problems might douse her creative spark. ‘For years I didn’t want to do that,’ she says of therapy. ‘I felt I wanted to hold on to the mess. I was worried that if I got anything fixed that something would be taken from me creatively.’

Horgan, who was born in London but grew up in Ireland, recalls first experiencing the now-familiar feelings of dread while attending convent school. ‘Our response to being under the thumb of a quite psychotic nun there was just this constant fear running through you,’ she says.

Horgan adds that her feelings of inadequacy intensified when she landed a place at art college in Dublin in 1989. ‘I was pretty miserable there and probably should never have got in because I was pretty much one of the worst,’ she says. ‘I had a bit of a breakdown. I was quite lost and miserable.’