Catching Covid-19 on a train is just as likely whether you sit or stand, study finds

Catching coronavirus while on a train is just as likely whether you are seated or standing, a study has found.

Mathematicians have modelled how airborne diseases like COVID-19 spread along the length of a train carriage without an effective ventilation system in place.

The team, from the University of Cambridge and Imperial College London, found that there is no ‘safest spot’ for passengers to minimise the risk of transmission.

Air movement is slowest in the middle of the train, so any infectious passenger will affect the largest number of people if stood there rather than at one of the ends.

But, in reality, passengers are not going to know who is infected or where they are in the train, so infection risk is essentially constant wherever you stand or sit.

They researchers also found that masks are more effective than social distancing at reducing transmission, especially in trains that are not ventilated with fresh air.

They hope to produce more extensive models in future that to get a better idea of how airborne contaminants spread in enclosed spaces.

These results come amid the largest rail strike in 30 years in the UK, along with a 40 per cent surge in COVID cases since last week.

The model found that air movement is slowest in the middle of the train, so any infectious passenger will effect the largest number of people if stood there rather than at one of the ends.

HOW CAN YOU REDUCE YOUR RISK OF INFECTION OF COVID WHILE ON A TRAIN?

‘Most simple models assume the air is fully mixed, but that’s not how it works in real life.

‘There are many different factors which can affect the risk of transmission in a train – whether the people in the train are vaccinated, whether they’re wearing masks, how crowded it is, and so on.

‘Any of these factors can change the risk level, which is why we look at relative risk, not absolute risk – it’s a toolbox that we hope will give people an idea of the types of risk for an airborne disease on public transport.’

The results, published today in Indoor Air, show how important it is for train operators to improve their ventilation systems to keep passengers safe.

Many commuter trains in the UK are designed to have the maximum number of seats per carriage possible, to turnover the largest profit for each journey it makes.

In addition, most commuter trains recirculate air instead of pulling fresh air in from outside, since fresh air has to be either heated or cooled, which is more expensive.

Interior of Hitachi train Class 802, including the HVAC inlet (orange) and HVAC outlet (green). The arrows indicate the flow direction at the inlets and outlets. A: centre view, B: side view

The mathematicians developed a model that illustrates how airborne contaminants travel in a train carriage that considers only essential atmospheric physics.

It is based on a single train carriage with closing doors at either end, although it can be adapted to fit different types of trains, or even planes or buses.

The model was validated by a controlled experiment where CO2 levels were measured at several points in a real train carriage, and it gave similar results.

The researchers found that air movement is slowest in the middle part of a train carriage.

‘If an infectious person is in the middle of the carriage, then they’re more likely to infect people than if they were standing at the end of the carriage,’ said de Kreij.

‘However, in a real scenario, people don’t know where an infectious person is, so infection risk is constant no matter where you are in the carriage.’

Continuing to social distance while travelling on a train is a must when the carriage is at least 50 per cent empty, according to de Kreij 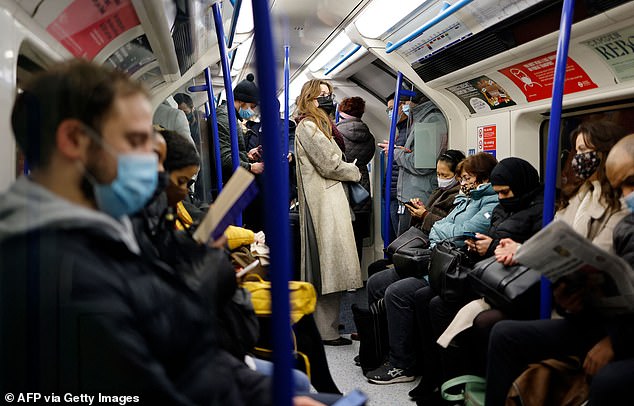 The researchers also found that masks are more effective than social distancing at reducing transmission, especially in trains that are not ventilated with fresh air

This confirms that proper ventilation is vital to reduce transmission of COVID-19 and other respiratory infections such as influenza.

Continuing to social distance while travelling on a train is a must when the carriage is at least 50 per cent empty, according to de Kreij.

He said: ‘Space out as much as you reasonably can – physical distancing isn’t the most effective method, but it does work when capacity levels are below 50 percent.

‘And wear a high-quality mask, which will not only protect you from COVID-19, but other common respiratory illnesses.’

If the carriage is more than half full, the researchers suggest the high risk central seats could be blocked off.

The researchers are now looking to extend their initial model to consider other physical factors that may influence the spread of contaminants in a train.

This could include splitting the carriage into different zones and estimating the cross-sectional flow of each, or the presence of large droplets or objects which are likely to carry infection.

It could also consider thermal stratification – when two types of steam with different temperatures form two separate layers after coming into contact.

This phenomenon could result in a more contaminated layer of air being located in the breathing zone of the passengers.

Covid cases jump 40 per cent in a week in England with 1.1million infected

Covid cases surged by 40 per cent in England last week, in what is feared to be the start of a fresh wave of the virus, according to Office for National Statistics (ONS).

An estimated 1.13million people were infected on any given day in the week ending June 10, the equivalent of one in 50 of the population.

It marks the biggest weekly jump since December, when Omicron was first seeded in the country.

Cases are also rising in Wales and Northern Ireland (one in 45 had the virus last week) and Scotland (one in 30).

The ONS’ weekly infection survey has become the best barometer of the outbreak in the post-pandemic era after free testing was axed and the daily dashboard was scaled down.

Data suggests the resurgence is being driven by the BA.4 and BA.5 subvariants of Omicron, which are thought to be even more infectious than the parent strain.

Scientists also believe the Queen’s Platinum Jubilee celebrations may have fuelled the uptick. 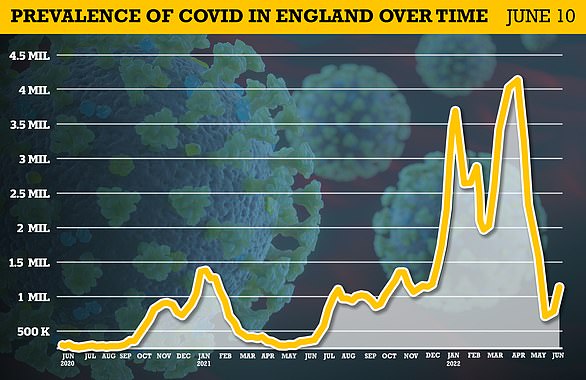 Covid cases surged by 40 per cent in England last week in what is feared to be the start of a fresh wave of the virus, official figures show. The Office for National Statistics (ONS) estimates 1.13million people were infected on any given day in the week ending June 10, the equivalent of one in 50 of the population. That figure is up 42 per cent on the previous week

How dominant Covid variants in England have changed over time: The BA.4 and BA.5 (shown far right in pale pink and red) are surging and taking over from the currently dominant BA.2 variant (sky blue). The original Wuhan virus is shown in green (far left) which was replaced by the Alpha strain (purple) and Delta (pale turquoise). The original Omicron is shown in yellow and a very similar subvariant in pink from December