A man whose identity was stolen by a lesbian paedophile so she could trick underage girls into performing sex acts on camera claims he has been contacted by hundreds of other potential victims.

Emily Timms, 23, pretended to be Joey Knight, also 23, for as long as nine years, setting up multiple fake social media accounts to contact her victims.

Timms, of Crawley, West Sussex, Facetimed the two girls, whereby she would convince them to perform sex acts on themselves before doing the same.

Maidstone Crown Court heard evidence from two victims, 16 and 17, but the real Joey Knight, claims there could be ‘hundreds more’.

Joey Knight (pictured), 23, had his identity stolen by Emily Timms, also 23, for as long as eight years. She created fake social media accounts for him, tricking two teenage girls into performing sex acts on Facetime. But Mr Knight, of Epsom, Surrey, claims he has had ‘hundreds’ of messages from other potential victims also duped by her

The semi-professional boxer, of Epsom, Surrey, told MailOnline the first time he realised Timms was impersonating him was back in 2008 when he was just 14.

He says he got a phone call from a group of friends who had met a girl claiming to be his girlfriend, when he had never spoken to her in his life and was single.

He said: ‘It freaked me out but there was nothing I could do, no laws had been broken so I just had to leave it.’

But two years later he claims he got a message from Timms herself, desperately pleading with him to accept her Facebook friend request.

Timms (pictured), of Crawley, West Sussex, was jailed for three years and wept as she was led away by prison officers

He told MailOnline: ‘In 2010 I got a Facebook message from someone called Emily Timms saying “Hi I really need you to accept me as a friend so I can see your Facebook page so I can see something.

“There’s a fake Facebook pretending to be you, I need to get on the page to see if it’s really fake.”

‘I told her to f*** off and tried to forget about it. But since then I’ve had messages from girls who think I’ve been talking to them at least once a month.’

Timms, who wept as she was led away by prison officers, sent gifts to the two victims who gave evidence in court, which included a designer Marc Jacobs watch, soft toys, chocolates and notes professing her love.

When they asked to see her, she lied and said ‘she did not look good’ and sat in a darkened room while on Facetime.

But after receiving such regular messages, both from girls who believe they had been talking to him, and their friends and relatives, Mr Knight is convinced she committed further crimes.

He said: ‘If I had to put money on it, I would say there could be hundreds of others.

‘She’s been doing this for a long time.

Every time I get a message it makes me feel sick because these girls are so young, between 15 and 19-years-old.’

The 23-year-old claims the most recent message he received from a girl who had been duped was last week, implying Timms was even messaging girls during her court case. 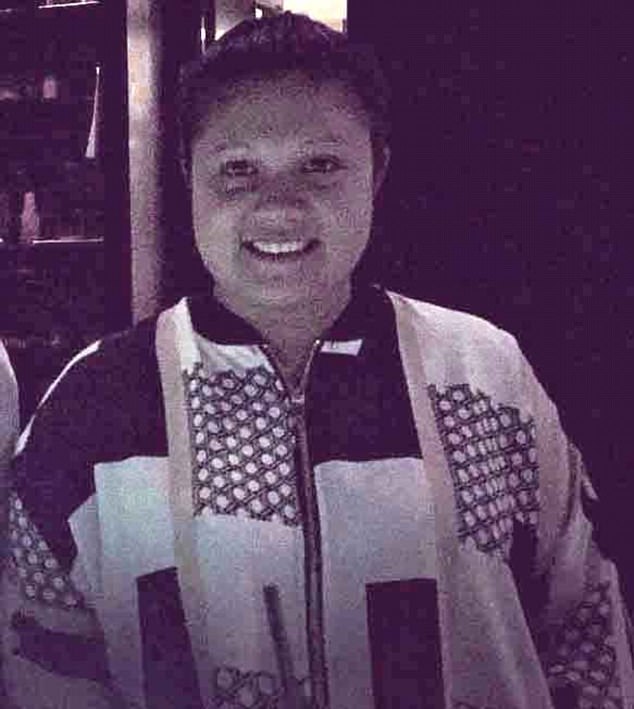 He said: ‘The last message I got from someone was on Friday, which means she was probably still doing it.

‘She’s addicted. She can’t stop herself.

‘She’s a sick, disgusting person, I hope she rots.

‘She won’t care she’s in prison, because all she wants is lesbian interaction with other girls and she’ll probably find that in there.’

Mr Knight reported Timms to the police in late 2014 after a friend who worked in a mobile phone shop traced the phone number one of his victims had been contacted by her on.

He told MailOnline: ‘When he told me her name, I couldn’t believe it – it was Emily Timms from all those years ago.

‘She had gathered so much information about me it was so weird. 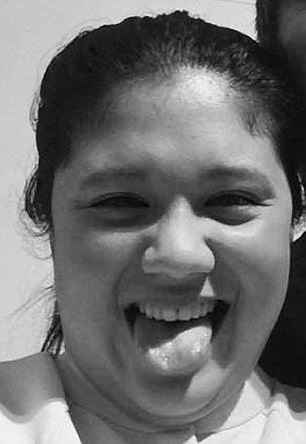 The 23-year-old (pictured) showered the two victims who gave evidence in court with gifts, including a sex toy one of them used in front of her on Facetime

‘Somehow she had got hold my of sister’s baby scan and had been telling people my mum had died – she is so sick in the head.

‘I told her to leave my family alone.’

When police arrested her in June 2015 an officer allegedly told Mr Knight that Timms ‘was really strange’ and had accumulated ‘hundreds if not thousands of images and documents about him’.

He said: ‘When they arrested her the policeman told me “We arrest people all the time, but this girl is really strange.

‘She had a very unnerving presence.”

‘She didn’t think she’d done anything wrong, even though she had hundreds if not thousands of documents about me on her computer.’

She was charged in March this year and convicted after a trial at Maidstone Crown Court in Kent.

The court heard her deceit was said to have been inspired by the MTV programme Catfish in which people form online relationships but have never met in person.

Urging the court to impose a suspended sentence, Alexia Zimbler, defending, said Timms was confused by her sexuality at the time and, although she acted dishonestly, she did not realise she was committing a crime.

However, Judge Charles Macdonald QC said the offences were so serious that ‘proper punishment and deterrence’ were required. 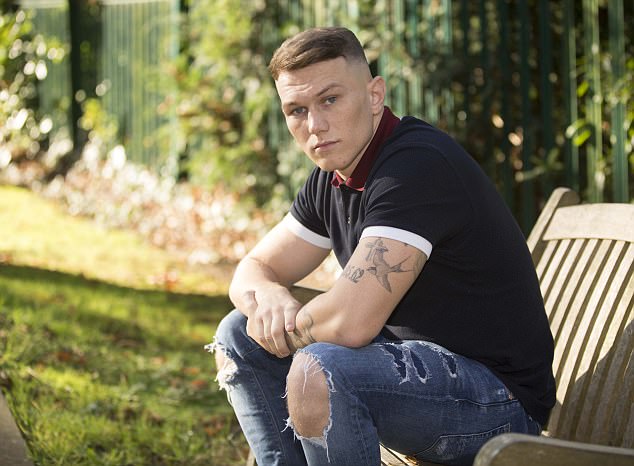 Mr Knight, who is a semi-professional boxer, claims Timms had ‘hundreds if not thousands’ of images and documents about him on her computer when her house was raided by police. He also claims she obtained his sister’s baby scan and lied to people saying his mother had died

He added: ‘I do accept she didn’t believe she was committing a crime although she was adopting a dishonest trick.

‘She claims to have been confused by her sexuality and inspired by a TV programme called Catfish to adopt a false identity in the hope of finding a happy ending with a female partner.

‘I accept this is a situation the defendant currently believes but I don’t accept it was her real thinking at the time of the offences.

‘Doubts about sexual orientation are common in young people and can be, and are, widely tested without pretending to be a man to deceive an underage girl, let alone two.

‘It is obtaining sexual gratification by deception.’

She denied another charge of inciting child pornography and one of blackmail, after she threatened to publish images she had obtained of her victims when she was rumbled by Mr Knight, but they were left on file by the court.

Mr Knight says his stolen identity has given him anxiety and he ‘lives looking over his shoulder’. 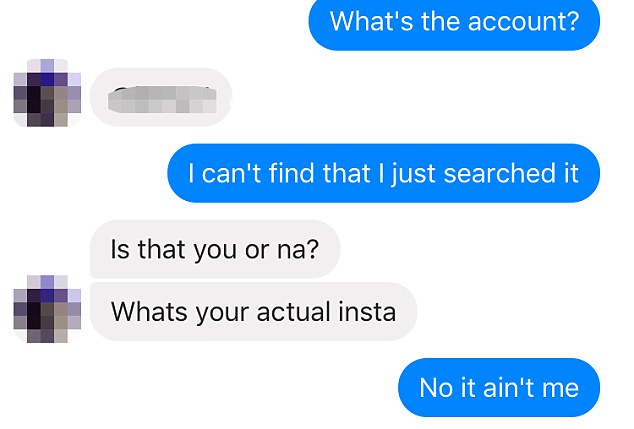 He also feels let down by investigating force Kent Police as they ‘refuse to see him as a victim’ in the case.

He did not give evidence during Timms’ trial.

He said: ‘I worry now that when I walk down the street people are going think I’m that ‘n**** geezer’ who was messaging their sister or their friend.

‘I feel let down by the police, because I’m a victim too.

‘My girlfriend has had messages from girls saying I’m cheating on her.

‘I wish she was a boy so I could find her and do something to her.’

A spokesman for the force told MailOnline: ‘Kent Police sympathises with those people whose identity is used for fraudulent or dishonest activity.

‘Anybody who has information regarding criminal offences should always report them via 999 or 101 in a non-emergency.’

Timms must sign on the sex offender register and be subject to a sexual harm prevention order restricting internet use for 10 years, and will be barred from working with children and vulnerable adults indefinitely. 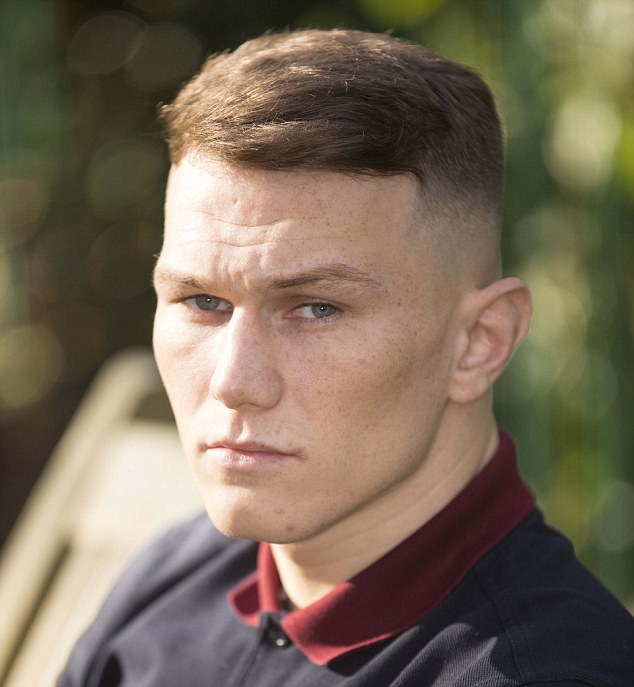