Filming for her latest movie, walking the red carpet and jetting between homes in New York and Bermuda … It’s all in a day’s work for Catherine Zeta-Jones.

But her latest business venture is rather less typical of an Oscar-winning Hollywood star.

Tomorrow, La Zeta will be hosting a programme on QVC — the home shopping channel famous for gaudy costume jewellery and cheap kitchen gadgets — and personally attempting to flog her new range of homeware to the watching masses.

The line, which she has called Casa Zeta-Jones, includes duvet covers, towels, throws and a rather fetching pink dressing gown with a faux-fur collar. Her PR puff promises: ‘Casa Zeta-Jones can make your vision of a glamorous world become a reality.’

Cool it certainly isn’t. And yet an astonishing roster of other stars, supermodel Cindy Crawford and Dame Joan Collins among them, have also signed up to be QVC brand ambassadors and sell their own ranges.

Normally, the company will negotiate a flat fee to the celebrity for agreeing to appear on the channel for a set number of hours, then take a cut of future sales. All deals are strictly confidential, and QVC declines to disclose what kind of cut they take.

One manufacturer anonymously broke cover, though, and said that if it costs him £1 to manufacture an item, QVC will sell it for £4 and give him £1.25, which is a small margin indeed.

But if an A-list celebrity is involved, another deal is struck. In the case of the late comedian Joan Rivers, QVC’s most successful celebrity ambassador, she is reported to have retained up to 25 per cent of the sold value of each item — a staggeringly rich deal.

Rivers promoted her jewellery, clothing and beauty products on the channel from 1990 until her death in 2014, after falling heavily into debt following the suicide of her husband and manager.

Over 24 years it is said she sold over a billion dollars’ worth of goods — an extraordinary sum.

An investigation by Forbes magazine suggested she personally made £184 million in total, once retail costs were accounted for and QVC had taken its very substantial cut. That is a jackpot-sized deal. It works out at £7.7 million a year.

And where Joan Rivers led, other celebrities followed, desperate to appeal to the potential cash cow that is the captive QVC audience.

The company has global sales of around £5.9 billion a year. In the UK, QVC broadcasts for 17 hours a day and is said to be watched in 15.4 million homes. Its UK distribution centre and call centre in Kirkby, Merseyside, is the size of eight football pitches.

It has incredible commercial pulling power, which perhaps accounts for celebrities with bona fide careers and substantial fortunes using it to sell their goods. Catherine Zeta-Jones, 48, is said to be worth £35 million.

Designer Kelly Hoppen, one of the UK’s top celebrity sellers, says: ‘Until people shop on the channel, their perception of QVC is very different.’ Hoppen, by the way, makes a staggering £4 million a year out of selling ceramic Buddhas and tasteful neutral duvet covers.

So who’s who in the QVC Crew — and how much do they make the company’s cash registers ring? 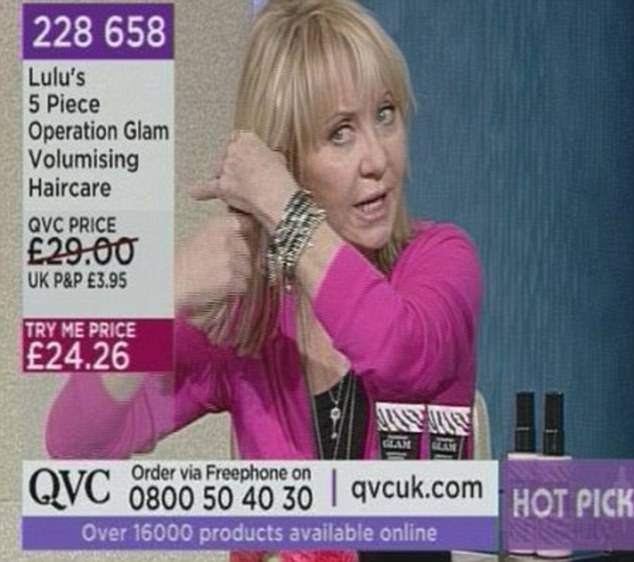 WHAT SHE’S WORTH: Her fortune is some £35 million, while husband Michael Douglas is said to be worth £155 million.

An Oscar and Tony award winner, Zeta-Jones splits her time between a beach house in Bermuda, a Majorcan cliff-top retreat, a ski lodge in Quebec, a mansion with stables in Bedford, upstate New York, and a ravishing apartment in Manhatten, overlooking Central Park.

WHAT SHE’S SELLING: The Casa Zeta-Jones collection is very feminine, and inexpensive to say the least. Embroidered towels cost £27 for a set, pink jaquard cotton bedding is £26, a faux fur throw is £25, and that fetching pink bathrobe is £25.

Catherine said: ‘This is a project I have been passionate about and working on for years now, and I am delighted to share it with QVC customers.’

WHAT SHE’S MAKING: While the terms of the deal are confidential, it would be expected that her money will increase if she exceeds sales targets. The likelihood is she will enjoy an initial deal of around £2 million — at least equivalent to her past earnings as an ambassador for Elizabeth Arden perfume.

WHAT SHE’S WORTH: Around £5 million. Holden, 46, has been a Britain’s Got Talent judge for ten years — a job thought to earn her more than £500,000 a year. Home is a £3 million house in Richmond, Surrey, and a £1 million farmhouse in the Cotswolds, which she shares with her husband Chris Hughes, a music producer, and their daughters Lexi, 11, and Hollie, five.

WHAT SHE’S SELLING: A homeware range called BundleBerry after her nicknames for her daughters as babies. It’s made up of cheap and cheerful items which look rather like upmarket furniture brands, but at a fraction of the price.

Holden said: ‘My own home is modern and shabby in style, with a strong Seventies influence … I know about sticking to a budget from my early days doing up a flat.’ QVC says the range is ‘very much her’.

WHAT SHE’S MAKING: The range only went on sale in May, so it’s too early to post an annual income. An agent representing similar celebrities said this week he’d expect a deal of at least £350,000 to be in place for Holden. 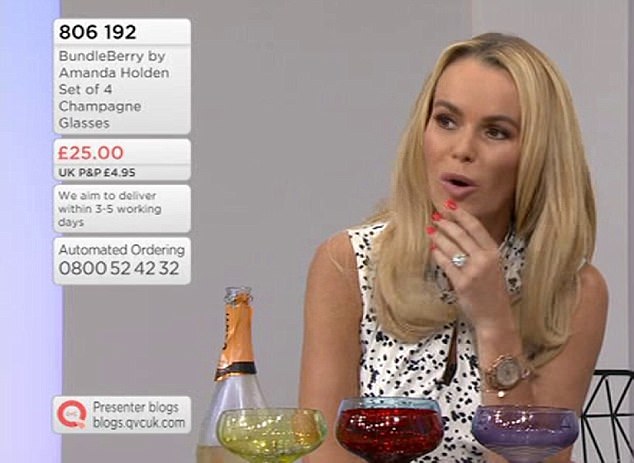 WHAT SHE’S WORTH: Veteran singer Lulu Kennedy-Cairns, 68, lives in Little Venice, London, and is said to be worth £22 million. Currently single, she has been married twice — to the late Bee Gee Maurice Gibb and celebrity hairstylist John Frieda.

WHAT SHE’S SELLING: No doubt targeting those women who wish to imitate her own ageless appearance, Lulu plugs her Time Bomb range of skincare on QVC. Launched in 2007, it sold out within 15 minutes of her debut on the channel.

It was even reported that a lorry carrying her creams was raided at a motorway service station. Her range remains one of QVC’s strongest sellers, with her £36 night cream in particularly high demand.

WHAT SHE’S MAKING: Lulu has never disclosed how much she makes from QVC, but a hint is given via the accounts of her company Synchrostar Ltd. Its latest filed figures suggest total assets of a whopping £469,000. Lulu is the sole shareholder.

WHAT SHE’S WORTH: Interior designer to the stars Kelly Hoppen, 58, is said to be worth £50 million. Known as the Queen of Taupe, she famously designed the Beckhams’ minimalist decor in LA. She lives in a £5 million house in West London and invests her money in art and Hermes handbags.

WHAT SHE’S SELLING: A little slice of Kelly Hoppen’s trademark style — at a price. She sells a 1,000-thread count six-piece duvet set for £189. A scalloped vase is £28, while a chunky knit throw is £80. She also flogs jewellery — a gold plated pendant is £45. Given that her interior design work reputedly starts at £300,000 a room, relatively speaking it’s as cheap as chips.

WHAT SHE’S MAKING: She told an interviewer that she earns £4 million a year from QVC — and gets a kick out of their famous control room where they watch how quickly items featured on the channel are selling. ‘I can’t tell you how much I love doing QVC,’ she says. ‘They’re shouting: ‘It’s selling out! It’s selling out!’ 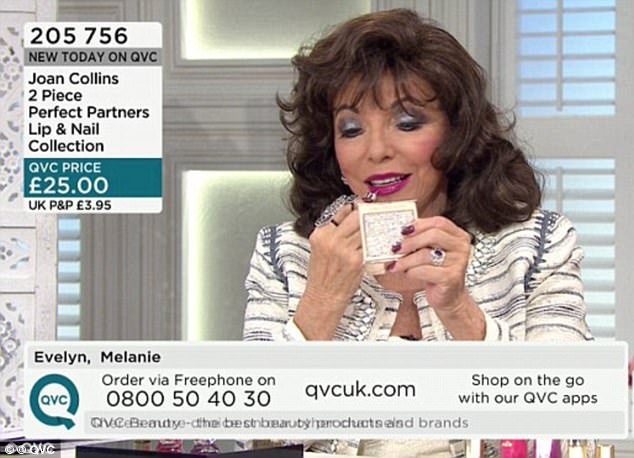 WHAT SHE’S WORTH: Fergie, 57, has complained about being broke for years, despite receiving £3 million from the Royals in her divorce settlement. In 2010, she was close to bankruptcy, with reported debts of almost £5 million. Today, she lives in Verbier, Switzerland, in a £13 million ski chalet bought together with her ex-husband Prince Andrew.

WHAT SHE’S SELLING: In 2015, Sarah, Duchess of York popped up on QVC flogging styling tongs, the Calista Perfecter Ultra 2-in-1. In one toe-curling exchange, she talked about the £52 tongs being available in ‘royal purple’.

In the same year, she also appeared on QVC selling the Fusion Xcelerator food blender, telling viewers: ‘No longer am I the Duchess of Pork… or fat, frumpy Fergie…’ — the nicknames that broke her heart.

WHAT SHE’S MAKING: The company behind both gadgets, Tristar Products, has not divulged what it paid the Duchess. The products are still featured on Fergie’s ‘Duchess Discoveries’ website, however. Tristar are said initially to have paid a ‘low six-figure sum’ for each product — meaning that she would have earned at least £200,000. 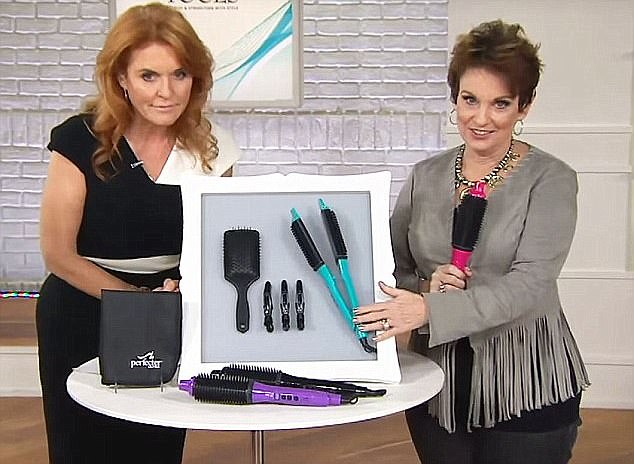 WHAT SHE’S WORTH: With a house in London’s Belgravia, another in the South of France and an apartment in Hollywood, no one could doubt that Dame Joan, 84, is a woman of means. But don’t for one minute think that with a reported worth of £24.5 million, she is rich.

Dame Joan told an interviewer earlier this year: ‘What’s rich? I’m not exactly rich, no. ‘Rich, as Robert Wagner said to me, is having f*** you money. I don’t have that, and I have a lifestyle to support.’

WHAT SHE’S SELLING: Since 2011, she has sold cosmetics and fragrance under the Timeless Beauty label on QVC. Her perfume, I Am Woman, costs just £20, Class Act mascara is £30 and the two-piece Paparazzi collection — that’s a lipstick and a compact with powder and a mirror — costs £27.48. Shoppers adore it, with most items rated five stars.

One happy shopper wrote: ‘I have bought many of Joan’s products, just pure quality, this one I love. Keep coming back — Joan We Love You.’

WHAT SHE’S MAKING: No one has dared ask, but can you see Dame Joan doing this for less than Joan Rivers?

WHAT SHE’S WORTH: A long modelling career, a successful reign as the goddess of early fitness videos and now commercial deals including QVC, mean Crawford, 51, is said to be worth £74 million. Home is in Los Angeles with husband Rande Gerber — who’s thought to have even more money than Cindy. They also have a holiday pad at Los Cabos on the southern tip of Mexico’s Baja peninsula

WHAT SHE’S SELLING: Her skincare line, Meaningful Beauty, created with cosmetic doctor Jean Louis Sebagh. The Ultra Lifting & Filling serum costs £36, as does the Night Creme, and the Skin Brightening Neck treatment costs £40. Not all shoppers are convinced, however, and products have two and three star reviews.

One wrote of the serum: ‘I found this product to be very sticky on my skin. It was still sticky several hours later. I didn’t feel any immediate lifting or see any lifting on my skin either.’ Another who tried the cream wrote: ‘I was so excited to receive this! Then I tried it and I was devastated. It was very drying.’

WHAT SHE’S MAKING: One of the breed of supermodels who wouldn’t get out of bed for less than 10,000 dollars day, Crawford has been working with QVC since 2009. Because of her high profile, she will be one of their top-earning celebrity ambassadors.