England’s leading Catholic Cardinal is refusing to resign despite an inquiry finding he prioritised the reputation of the church before children who were sexually abused by priests.

Cardinal Vincent Nichols, the Archbishop of Westminster Diocese, said he recently offered his resignation to the Pope on account of his age and nothing else, but that he was told to stay in post.

It comes as the Independent Inquiry into Child Sexual Abuse (IICSA) report into the Catholic Church, published on Tuesday, found Cardinal Nichols ‘seemingly put the reputation of the church’ above his duty to sex assault victims.

The report by the Independent Inquiry into Child Sexual Abuse (IICSA) said that the response of the Catholic Church in England and Wales to allegations of child sexual abuse ‘focused too often on the protection of the clergy and the Church’s reputation’.

In the conclusion of the report, published on Tuesday, it said: ‘Some institutions and individuals in the Church failed to report allegations and concerns to police and statutory authorities as required.

‘In some cases, members of the dioceses and religious institutes actively took steps to shelter and shield those accused of child sexual abuse.

‘This was done at the expense of protection of children.

‘There were failures to consider the risks posed to children by perpetrators who were seen as colleagues, brethren and friends and not as sexual abusers of children.

‘In some cases, suspects were moved from one institution to another – from parish to parish, abbey to abbey – with the receiving body not informed of the dangers posed by the individual being sent to them.’

Later in the report, it added: ‘While there have undoubtedly been improvements in the Church’s response to child sexual abuse, based on the evidence we heard, Church leaders need to do more to encourage and embed a culture of safeguarding throughout the entire Catholic Church in England and Wales.’

It added that he had demonstrated ‘no acknowledgement of any personal responsibility to lead or influence change’.

The report findings were met with calls for Cardinal Nichols to resign – something he says he will refuse to do.

He said: ‘I was 75 very recently. A few weeks ago, as according to the law of the Church, I sent my resignation into Pope Francis and I have received a very unequivocal reply, and that is that he tells me to stay in office here.

‘So that is what I will do, that is where my orders come from. I’m staying.’

Asked if he was the right person to lead the Catholic Church in England and Wales, despite the report’s findings, Cardinal Nichols said: ‘I do what I’m told. The Holy Father put me here and he tells me to stay here – that’s enough for me.’

Richard Scorer, specialist abuse lawyer at Slater and Gordon representing survivors at the inquiry, said: ‘This is an absolutely damning report.

‘Cardinal Nichols needs to go right away – in any other walk of life he would be gone immediately.

‘This is a church that cannot be trusted to protect children.’

The report said between 1970 and 2015 there were 931 allegations or concerns of child sexual abuse made by 1,753 individuals against clergy, members of religious institutes and lay workers – both paid and voluntary.

According to the report, these complaints involved more than 3,000 instances of alleged abuse made against 936 alleged perpetrators.

The National Catholic Safeguarding Commission (NCSC) also recieved on average 100 allegations of child sexual abuse per year between 2016 and 2018.

In relation to the historic allegations, the report found that the Catholic Church repeatedly failed to support victims and survivors, while taking positive action to protect alleged perpetrators, including moving them to different parishes.

It highlighted the case of Father James Robinson, a serial paedophile, who was moved to another parish within the Archdiocese of Birmingham after complaints were first made in the 1980s. He was later jailed for 21 years.

The report also identified how senior leaders were resistant to external oversight and have only partially implemented the recommendations of previous reviews.

It said investigators were concerned by the role of those vested with leadership in relation to the ‘laboriously slow pace of change’, a ‘lack of empathy and understanding towards many victims and survivors’ and ‘uncertainty as to whether a culture of safeguarding is fully embedded across the entire Church’.

Focusing on Cardinal Nichols, the report said: ‘In the cases of (two complainants), Cardinal Nichols demonstrated a lack of understanding of the impact of their abuse and experiences and seemingly put the reputation of the church first.’ 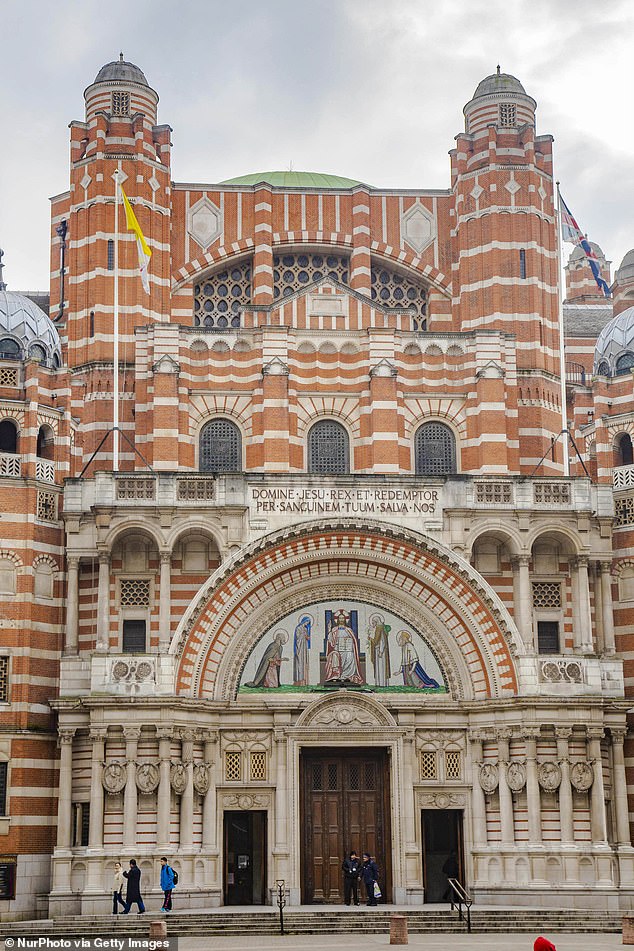 Westminster Cathedral, which is the mother church for Roman Catholics in England and Wales

The report also found Cardinal Nichols demonstrated ‘no acknowledgement of any personal responsibility to lead or influence change’.

It added: ‘The responses of church leaders over time were marked by delay in implementing change as well as reluctance to acknowledge responsibility, to hold individuals to account or to make sincere apologies.

‘They conveyed on occasions a grudging and unsympathetic attitude to victims.

‘Failure in some of these areas contributed to more children experiencing actual abuse and many others being exposed to the risk of sexual abuse.’

In the report, it said the Church’s historic response to allegations ‘focused too often on the protection of the clergy and the Church’s reputation’.

‘Some institutions and individuals in the Church failed to report allegations and concerns to police and statutory authorities as required,’ the report added.

The report said: ‘In some cases, members of the dioceses and religious institutes actively took steps to shelter and shield those accused of child sexual abuse. This was done at the expense of protection of children.’

The report later adds: ‘While there have undoubtedly been improvements in the Church’s response to child sexual abuse, based on the evidence we heard, Church leaders need to do more to encourage and embed a culture of safeguarding throughout the entire Catholic Church in England and Wales.’

The report makes a number of recommendations, including mandatory safeguarding training for all staff and volunteers, and for the Catholic Safeguarding Advisory Service to be externally audited.

It said the subject of mandatory reporting – the legal duty to report allegations of child sexual abuse to the appropriate authorities, something Catholic Church leaders have opposed due to the ‘sacred nature’ of disclosure made during confession – will form part of the inquiry’s final, overarching report into abuse allegations across society.

One survivor who gave evidence before the inquiry said of the report: ‘The head of a church should have the greatest morals of all, but instead they were sending paedophiles to other areas of the country – and America – in an attempt to cover the abuse up. How ‘Christian’ is that?

‘It was bad enough being abused in the first place but then to have it dismissed and covered up just takes even more of a toll on you.’

The inquiry also criticised the Holy See – the Pope and the offices of the Catholic Church based in Rome – for a lack of cooperation during the investigation.

The findings chime with a separate report by the IICSA last month, which said the Anglican Church failed to protect vulnerable children from sexual predators for decades, instead prioritising its own reputation.

The remaining avenues of the inquiry are due to hear evidence later this year, before a final report of overarching findings from all 15 sections of the investigation is laid before Parliament in 2022.