The Catholic Church should pay reparations for its role in an orphanage where a mass grave of children’s bodies was discovered, an Irish minister has said.

Children’s Minister Katherine Zappone wrote in a letter to the pontiff that the church should pay to help survivors of the home in Tuam, County Galway, where around 800 infants were buried in a septic tank between 1925 and 1961.

Pope Francis vowed to pursue justice for victims of church abuse during his two-day trip to the country and has pledged to study an official memo about the property.

But some Catholics have voiced their disappointment with the Pope, saying his apologies were not enough and firmer action was needed.

Children’s Minister Katherine Zappone, pictured meeting Pope Francis on Saturday, wrote in a letter to the pontiff that the Vatican should pay to help survivors of a church-run home

Ms Zappone told the Pope she believed the church should contribute and has released the letter she sent the pontiff.

She said: ‘It is my strong conviction that given the role of the church in this shameful chapter of recent Irish history it must play a practical role in addressing the hurt and damage.

”I believe that the church should contribute substantially to the cost of whatever option is decided by the government.

‘This should be done willingly, unconditionally and quickly. Nothing less will demonstrate remorse.’

The legacy of church abuse cast a long shadow over the trip, the first papal visit to Ireland since 1979, with protests against the church’s role in a series of sexual misconduct scandals.

The pontiff said he viewed those who covered up clerical child abuse as ‘caca’, meaning ‘filth’.

Addressing a large crowd of pilgrims at an open air Mass in Dublin’s Phoenix Park on Sunday, he laid bare the many forms of abuse and mistreatment meted out to children and vulnerable adults in past decades. 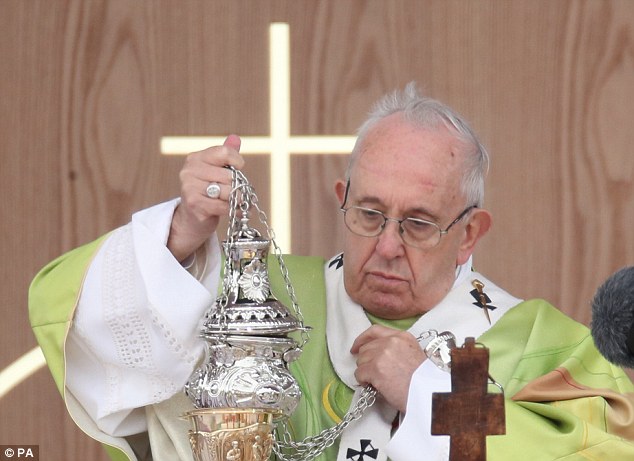 Pope Francis, pictured giving the closing mass of his two-day visit to Ireland, is facing calls to match a series of apologies with firm action to address historical abuse in the church

Francis ended his historic visit to the country by seeking forgiveness for a dark litany of clerical crimes.

But Jenny Moore-McGowan, a protester who went to a demonstration at Dublin’s Garden of Remembrance during the Pope’s mass on Sunday, said more action was needed, CNN reported.

She said: ‘I’m sure the Pope was sincere in his apology, but it needs to be followed up by action. Apologies are not enough.

‘We can never, ever, ever have these abuses again in Ireland. It ran right through this country like a virus.’

Aoibhin Meghen, a worshipper at the mass, said the Pope needed to take responsibility for cover-ups by Catholic officials and clergymen.

And Mark Vincent Healy from Dublin said: ‘This Pope has actually done nothing.’