Roxanne Pallett’s ex Richard Fleeshman has ‘liked’ a series of Tweets which slam her after she accused Ryan Thomas of ‘punching’ her during Thursday’s episode of Celebrity Big Brother.

Despite their previous romance, the actor appeared to side with the majority of the viewing public as he supported tweets urging the former Emmerdale star to get booted and praising Ryan’s ‘genuine’ character.

On the last episode, viewers watched as Roxanne broke down in tears after labelling the soap star a ‘woman beater’ after he playfully punched her, calling on producers of the Channel 5 show to kick out Ryan.

Roxanne Pallett’s ex Richard Fleeshman, 29, has ‘liked’ a series of Tweets which slam her after she accused Ryan Thomas of ‘punching’ her during Thursday’s episode of CBB

Following the episode, Richard was active on Twitter where he liked tweets which alluded to the fact that he didn’t sympathise with his ex.

Among the tweets he liked, was one from Roxanne’s Emmerdale co-sstar Charley Webb, which read: ‘Watching Big Brother for the first time in years. Wow, just wow. #dangerous.’

Another tweet referencing Roxanne directly, shared by Pretty Little Thing’s Umar Kamani, read: ‘Don’t know what’s going on!!! But can we send a branded PLT helicopter to get Roxanne out? #CBB.’ 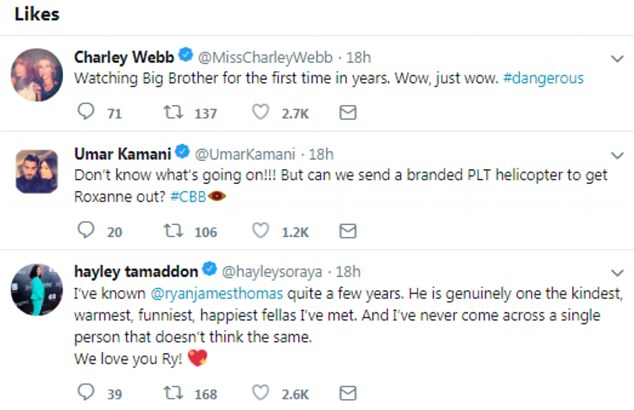 ‘Dangerous’: The actor sided with the majority of the viewing public as he supported tweets urging the former Emmerdale star to get booted and praising Ryan’s character

And showing where his loyalties rested, he supported another view on the social media platform: ‘I’ve known @ryanjamesthomas quite a few years. He is genuinely one the kindest, warmest, funniest, happiest fellas I’ve met.

‘And I’ve never come across a single person that doesn’t think the same. We love you Ry!’ the gushing tweet read, which was by yet another Emmerdale actress, Hayley Tamaddon.

Meanwhile, while an emotional Roxanne was in the diary room on Thursday she asked to speak with a producer off camera, explaining: ‘I just need to talk to somebody in production about something that’s just happened that made me really uncomfortable.

‘I don’t really want to go any further and talk about it on camera like this.’

Roxanne’s comments were sure to leave fans confused as it wasn’t until later that the actress stepped back into the Diary room to say: ‘I was in shock.’

‘A boy has punched me repeatedly, unprovoked, deliberately, he actually punched me like a boxer would punch a bag we weren’t play fighting there was no joke, there was no exchange.’

Ryan was called in to be given a formal warning regarding the incident, where he said: ‘I think that we both know and Roxanne knows that there was no malice and hurt, or anger, in anything that I did during this time. But from your point of view, while doing this show, I am sorry and I understand.’

Roxanne then asked to sleep in a separate bedroom because she was ‘suffering’ and ‘didn’t feel comfortable’ sleeping in the same room.

Many claimed Ryan was ‘obviously play fighting’ and ‘hardly touched her’ during the incident, which aired on last night’s episode.

Ryan’s girlfriend and reality TV star Lucy Mecklenburgh called for Pallett to be removed from the show, adding that she does not think ‘she is fit’ to be on the show.

Others criticised Pallett for ‘belittling actual victims’ of domestic abuse and for a trying to ‘ruin’ Thomas’ career.

Following the backlash, a representative for Roxanne said: ‘Roxanne has no contact with the outside world to make her own statement, however we do know that Roxanne has worked closely with various domestic violence charities due to being a victim of domestic violence herself.

‘She would be very upset to find out she may have caused offence to others who have been through the same.

‘We can’t make any more comment at present until such time as Roxanne is out of the Big Brother house and is able to address this situation herself.’