A CBS reporter, who was the first person to die in a Revel moped crash, was not wearing a helmet, according to reports.

Nina Kapur, 26, was riding as a passenger on one of the electric scooters when she was killed in Brooklyn, Manhattan, on Saturday.

Her death follows a series of incidents involving Revel riders including a serious head injury suffered by a 38-year-old man who remains in critical condition.

CBS New York reporter Nina Kapur, 26, (pictured) who was the first person to die on a Revel moped, was killed in Brooklyn, Manhattan, on Saturday

Kapur, of Newton, Pennsylvania, was being driven by a 26-year-old man in Greenpoint who claimed he swerved to avoid a car that was pulling out, according to unnamed police sources.

Both Kapur and the driver were thrown on to the roadway but it is thought that neither were wearing helmets.

They were taken to Bellevue Hospital where Kapur was pronounced dead.

The driver, whose relationship to Kapur was not immediately known, suffered only minor injuries, according to police sources.

Photos recently shared by onlookers showed a blue Revel scooter laying on its side across the sidewalk as firefighters and EMS workers strapped a woman on to a stretcher. 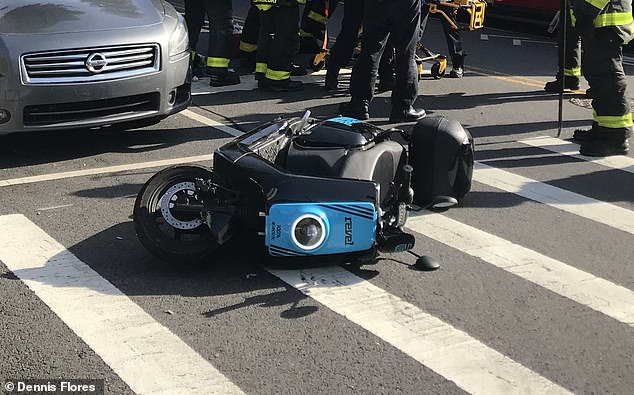 CBS2 originally shared the tragic news on Sunday but did not provide additional details about the incident at the time.

‘We are heartbroken here at CBS2 as a member of our news family has passed away,’ the outlet said in a statement. ‘Our thoughts and prayers are with Nina’s family. She will be missed.’

Kapur, a Pennsylvania native, graduated from Syracuse University in 2016 and joined CBS2 in June 2019, where she was ‘known for her contagious smile and love for storytelling’, the outlet said.

Less than a week before her death Kapur had tweeted at Revel, a scooter-sharing service in New York City, and said that she had been trying to contact its customer support center.

She wrote: ‘Hi I have been trying to contact revel support for an hour an half now. Can someone please help me?’

A Revel representative later responded by asking her to send a direct message about her issue. 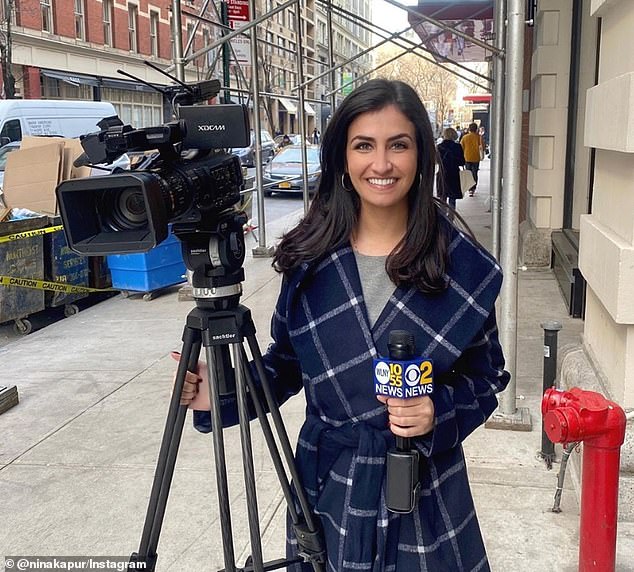 Speaking about Kapur’s death, a spokeswoman for Revel told MailOnline: ‘Revel extends deepest sympathies to Nina Kapur’s family and loved ones for their loss.

‘We are aware of reports that she passed away after an accident involving a Revel electric moped. We are actively investigating this incident, and we are in contact with the NYPD to aid their investigations in any way we can.

‘Given the ongoing nature of the investigation, we are unable to comment any further on the details of this incident at this time.’

It comes after it was revealed last week that Revel had suspended more than 1,000 users in the last month for violating its rules by driving recklessly in the city.

There have been a series of accidents involving riders since the electric scooter-sharing firm launched in NYC two years ago.

Just hours before Kapur’s accident, a 38-year-old man was left in critical condition with a head trauma after an apparent mishap with his Revel scooter, police said.

The victim was discovered lying on a pavement in Queens at around 5.30 am before a passerby called 911. 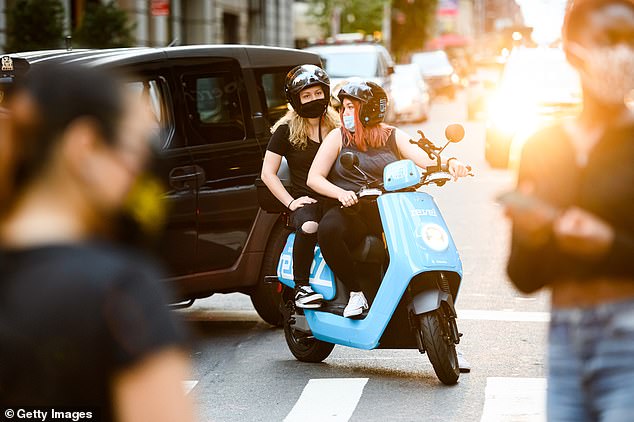 It is currently unclear if the man fell off the scooter or if he was hit by a vehicle that fled the scene, officers said.

He remains in a critical condition at Elmhurst Hospital and the investigation is still ongoing.

He said: ‘New York City is not the proper place to be learning for the first time how to ride a scooter. It’s not all that far off from a motorcycle.’

One of his clients, Paul Dicesare, is a cyclist who claims he suffered a broken ankle in a June collision with a Revel rider in Downtown Brooklyn, according to papers filed.

The suit, which seeks unspecified damages, argues Revel ‘was vicariously liable for the reckless, careless and negligent acts of its driver’.

Moreover, in a suit filed through another attorney, Revel rider Afadikwei Reyes claims that a Revel scooter locked up mid-ride which caused a crash that left him with two fractures in his leg.

Ride-sharing company Revel only expanded into Manhattan earlier this year after being confined to areas of the city’s outer boroughs, including Queens.

The company even offered free memberships to healthcare workers during the height of the city’s COVID-19 outbreak.

The company’s mopeds can go up to around 30 miles per hour, putting it in a vehicle classification that requires a driver’s license, but not a motorcycle license.

Riders can apply for a free lesson to ‘get comfortable with basic techniques needed to operate’ the scooters.

Speaking about legal and safety issues, a spokeswoman for Revel told MailOnline: ‘While we are unable to comment specifically on active legal matters, safety is our top priority at Revel, and we are committed to working with local officials and communities to promote safe transportation practices across the city.

‘Revel has strict safety policies in place, developed in adherence with all local and national regulations. All Revel vehicles are inspected by trained mechanics before they are allowed on the road. Revel offers our users free lessons, and new users watch an instructional video before riding with Revel.

‘Additional educational content is also available through our app and website. We are constantly iterating and adjusting our policies to address changing conditions.’