This is the shocking moment armed robbers marched a garage owner – who was bound by cables – back into his home as his terrified family were held at gunpoint inside.

Lee Harris, 48, and his family were subjected to a brutal 1am raid on September 11 in which six balaclava-clad armed men used a sledgehammer to smash their way into his home.

The violent gang bound, punched and threatened Mr Harris and his wife Nicola, 43, and their 17-year old twin sons Cameron and Broady in a terrifying raid. 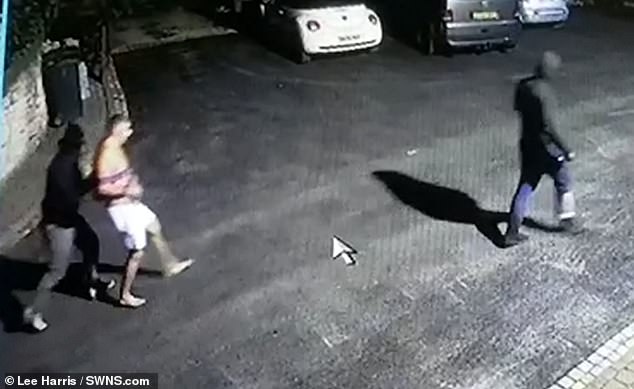 The violent gang marched Lee Harris (pictured) back from his garage Adwick MOT after stealing £15,000 of the company money 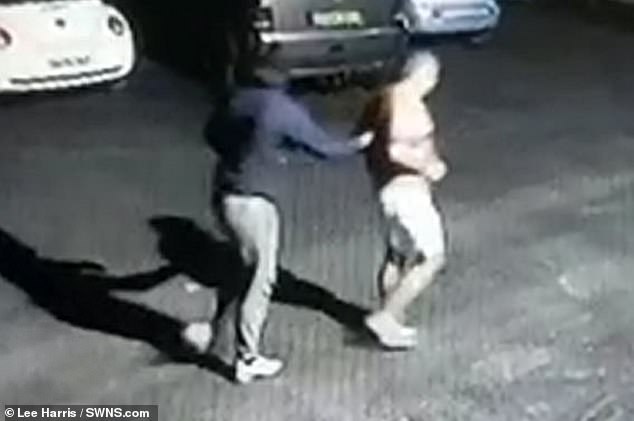 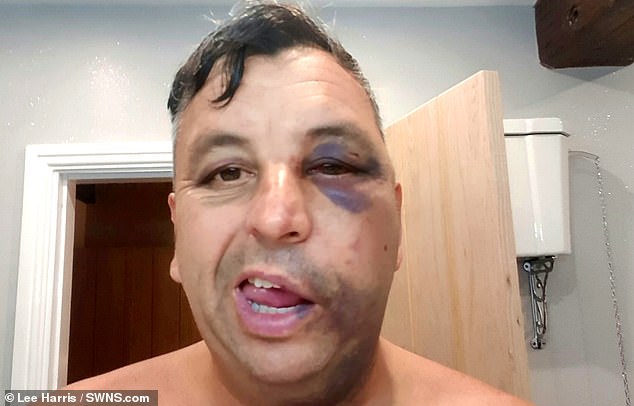 Recalling the terrifying scene, Mr Harris said: ‘They smashed through the back door with a sledgehammer.

‘My window is just above the door and I heard a massive smash and thought ‘what’s that, am I dreaming?’

‘I jumped out of bed and came out of our bedroom to the top of the stairs. I saw six men coming up the stairs with balaclavas on and I started fearing for my life.’

The thieves used increasingly violent tactics to get personal information from Mr Harris.

As a result he has been left with horrific injuries to his face including a fractured cheekbone and broken eye-socket.

It wasn’t just Mr Harris who was subjected to such violence however.

His son Cameron was dragged from his bedroom naked by the robbers while his brother Broady tried to wrestle with them.

His wife Nicola also tried in vain to stop the attack but was punched in the face and sustained injuries to her arms and wrists. 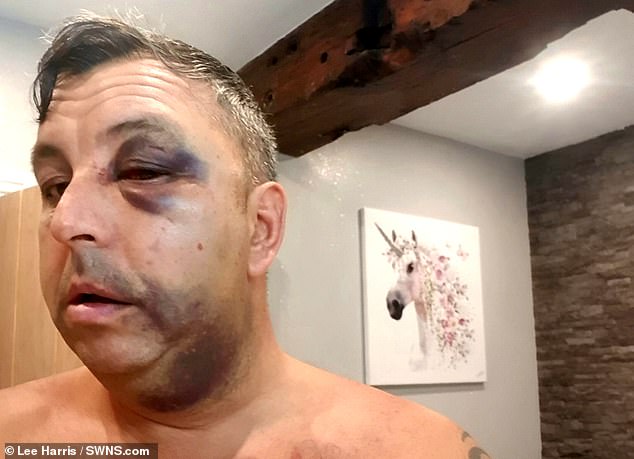 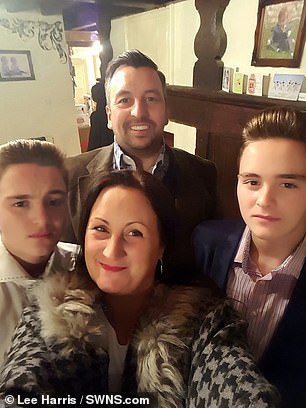 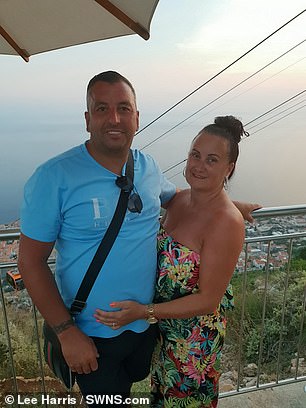 The gang was desperate to get their hands on the garage owner’s cash and so made efforts to get him to his workplace.

Ms Harris and the twins listened on in horror as the gang started boiling a kettle and were told it would be poured over them if they moved.

As they were held at gunpoint Mr Harris was led to his car and driven to Adwick MOT – the garage he owns – where the robbers stole over £15k of his company takings.

Mr Harris recalls trying to fight them, saying: ‘I ended up on the settee and one of the nastier ones came running over hitting me. 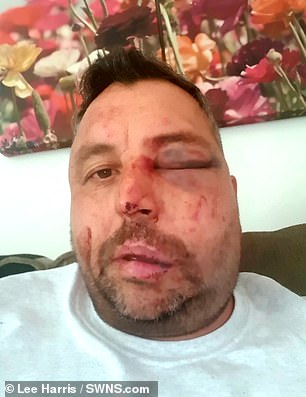 ‘They moved me out on the floor and started hitting me and stamping on me.

‘Nicola tried to intervene and they were hitting her. They punched her in the ribs and bruised her arm.’

Nicola said she thought the robbers were ‘going to kill’ her husband as he was led away – as the gang told her and the twins ‘this will be you’ if they didn’t comply.

She added: ‘They were shouting for money and one of them said ‘boil the kettle’.’

His son Cameron was subjected to a similarly terrifying ordeal.

The 17-year-old said: ‘Me and Broady were wrestling with them for about ten minutes.

‘Then a big man came in with a gun. As soon as I saw the gun I dropped to the floor.’

But the sheer aggression of the gang became too much for the teenager.

He added: ‘They had a gun to my head and asked me loads of questions.

‘I did everything that he asked me to do.

‘They showed us my dad and said ‘this is what will happen to you’.’ 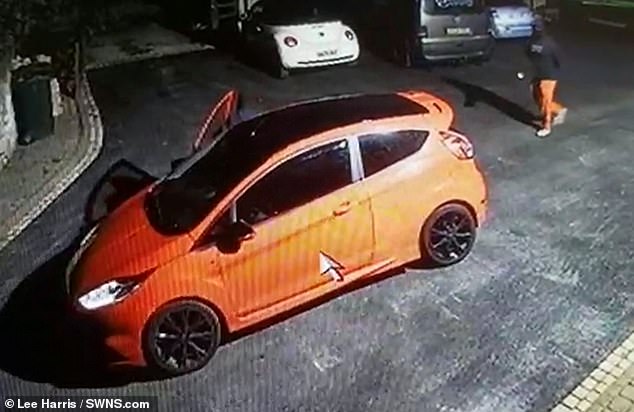 The CCTV footage also captures the violent gang driving off in a Red Ford Fiesta, blue Range Rover SVR and black Land Rover Discovery – all stolen from the Harris property 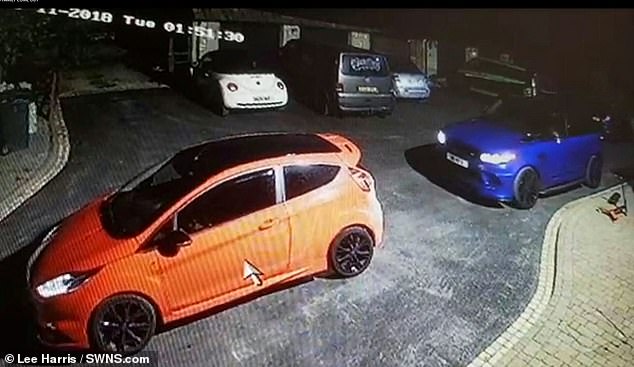 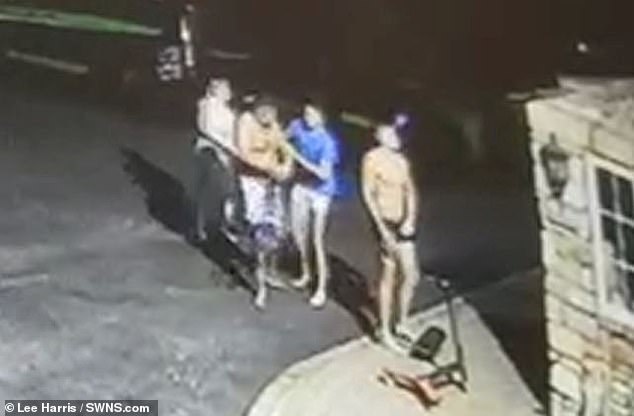 Cameron gave the robbers the personal information they needed to access the security system and drive Lee to the garage.

Chilling CCTV footage shows the moment Mr Harris was brought back to the house while bound in cables.

Fortunately the noise of their return was heard by neighbours who called the police who rushed to the scene with paramedics and brought an end to the incident.

By this point, however,  the violent gang had made off with three stolen cars, sentimental jewellery and cash from the home – as well as the cash from the garage.

CCTV footage also captured this point of the armed raid – as the thieves are seen driving off in a Red Ford Fiesta, blue Range Rover SVR and black Land Rover Discovery.

Lee was rushed to Doncaster Royal Infirmary and may need surgery to repair his broken eye-socket.

The horror-struck family, from Doncaster in South Yorkshire, have now been left unable to sleep and with mental scars from the devastating attack on their home.

Nicola, who had sentimental jewellery stolen including a watch given to her by Lee on her first mother’s day, said she has struggled to sleep.

She said: ‘I am fine during the day and it is business as usual but it is on a night, when I put my pyjamas on and I am barefoot, I feel vulnerable.’

Cameron said anxiety he suffered during his GCSEs was ‘notched up to 5000’ by the horrific ordeal.

The family have thankfully had their cars returned by the police and through the quick-thinking actions of Lee – who posted on Facebook asking if anyone had seen one of the vehicles.

Detective Inspector Anna Sedgwick from Doncaster CID said: ‘This was a horrific incident that has caused the family great distress.

‘A thorough investigation is underway and our officers are working with the family to put measures in place to help them recover from their ordeal.

‘We are keen to find who is responsible and would encourage anyone with information to contact 101 quoting incident 67 of 11 September 2018.’